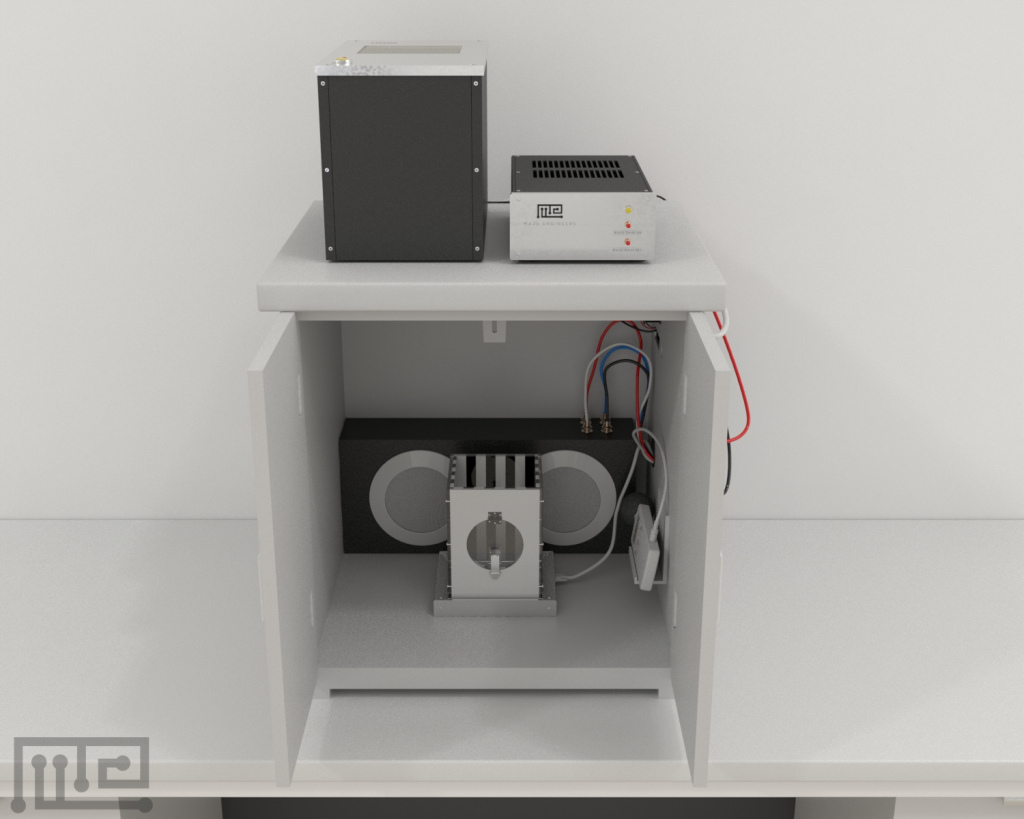 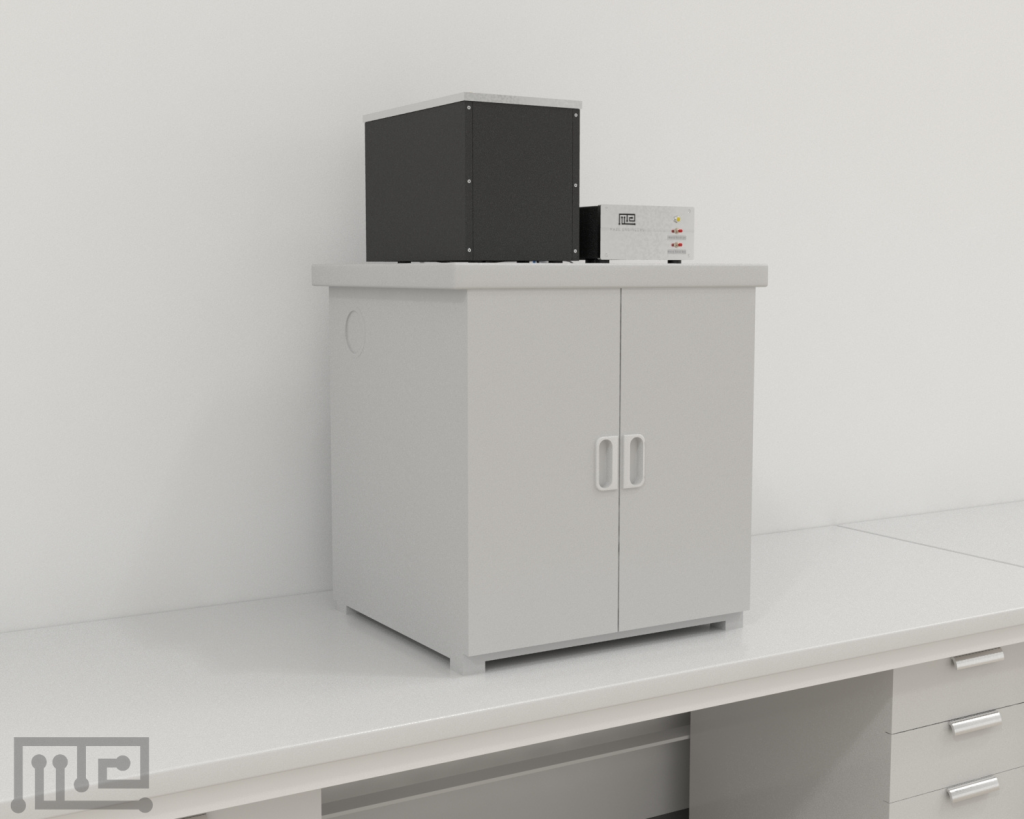 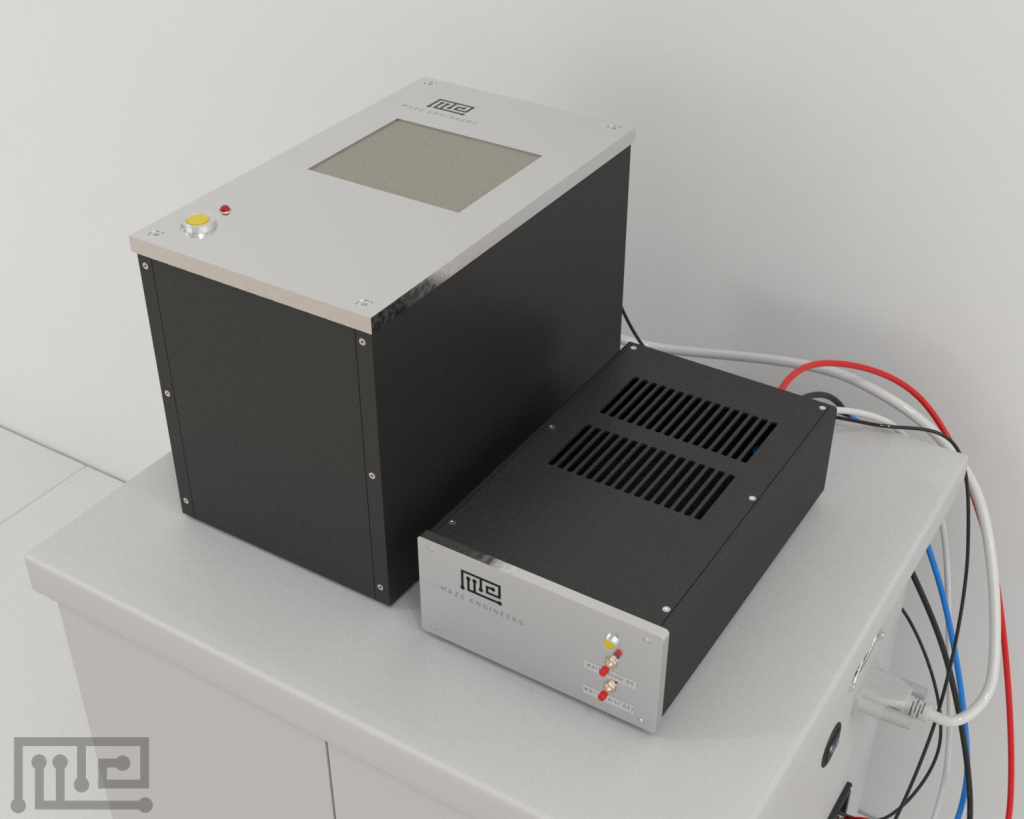 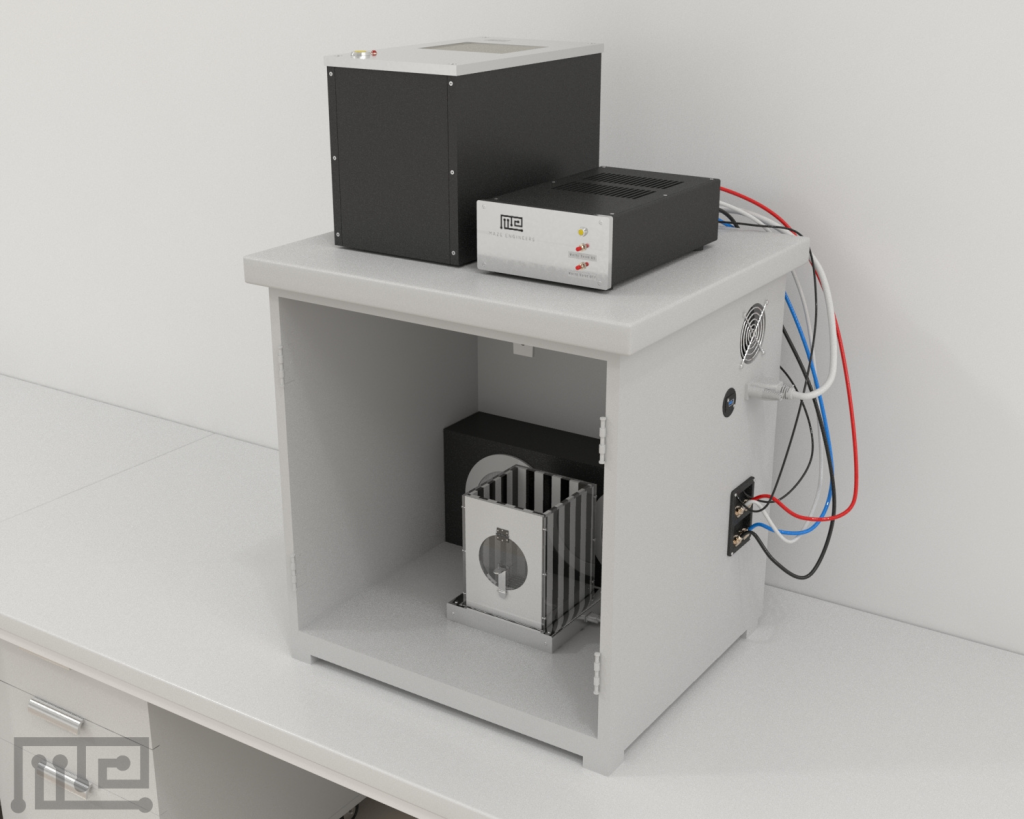 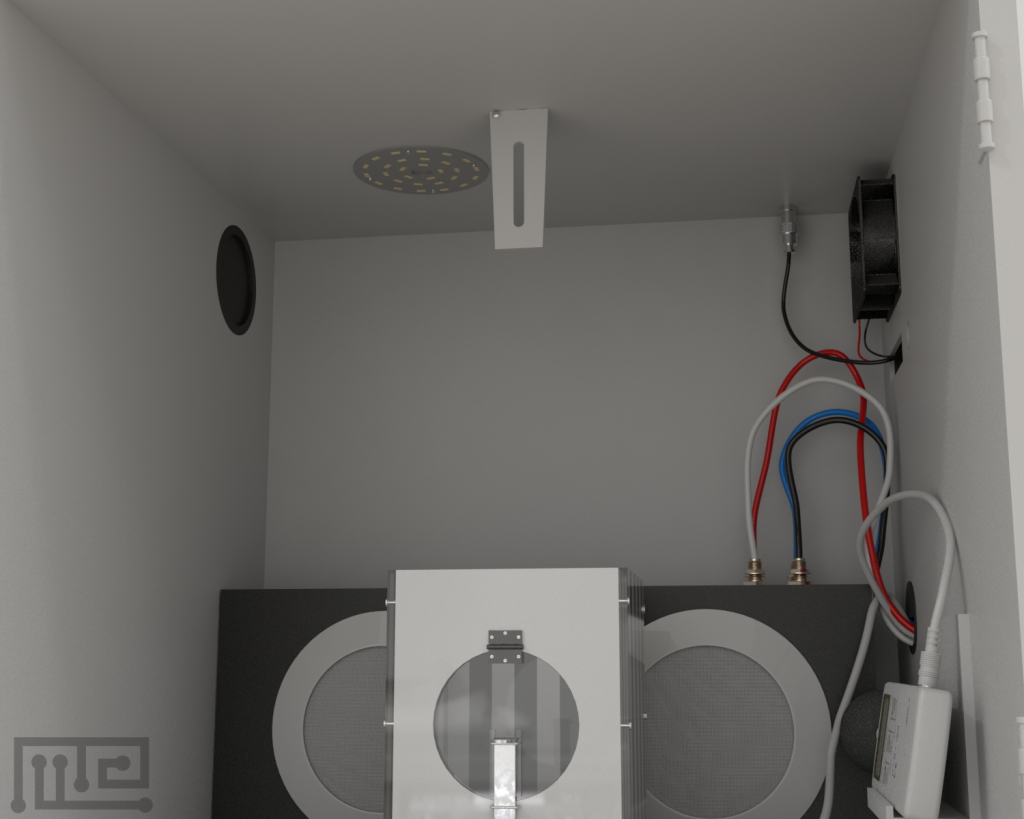 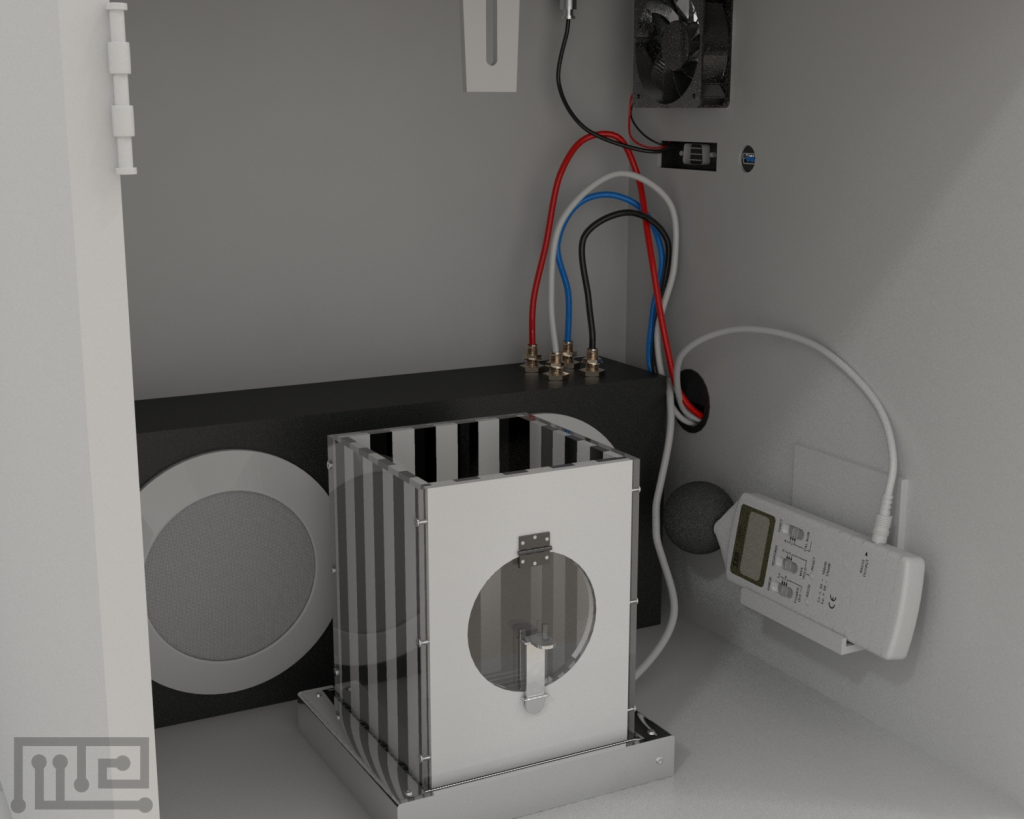 The Fear Conditioning Chamber is a behavioral task widely used in neuroscience to assess associative learning. We have carefully designed our chamber to allow new scientific avenues and to allow easy data collection and experimental execution. 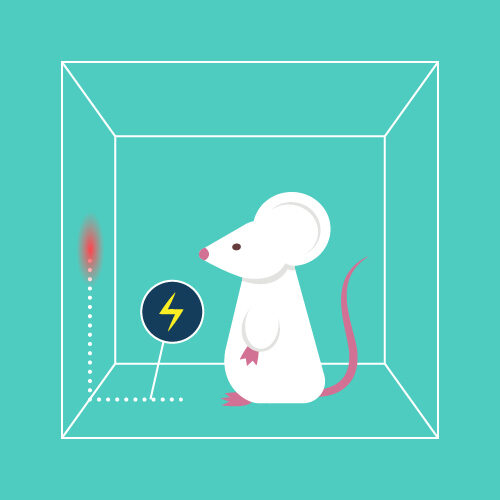 The Fear Conditioning Chamber test is based on the fact that the delivery of an unpleasant unconditioned stimulus (US), such as a foot shock, paired with a conditioned stimulus (CS), such as a particular context and/or an auditory cue, will lead to a learned association between the two stimuli. The animal will learn that the context (the testing environment) is unpleasant and that the auditory cue predicts a shock in the near future. When presented to the same CS, the animal will expect an unpleasant stimulus and will react by freezing (Curzon et al, 2009). This freezing response is the behavior assessed in this test.

There are different types of conditioning that can be assessed through this test:

Cued (delay) fear conditioning takes place when the aversive stimulus is presented at the end of or immediately after a cue (the CS), and is thus paired with the aversive stimulus (the US). When assessing cued fear conditioning, the context must be distinguished from the cue, so that it is not a confounding factor in assessing whether the animal learned the US. Separation of context and cue is ideal to establish and understand what the animal is learning (Rudy et al, 2004). This can be done by changing the properties of the context (area, color, lighting, or odor).

In trace fear conditioning, there is a time interval (trace) between the cue (the CS) and the aversive stimulus (the US). As the trace interval increases, the association becomes more difficult to learn. This increases the complexity of the test, requiring the formation of a temporal relationship between stimuli, thereby recruiting additional brain regions in order to establish the response.

Backward trace conditioning can be used as a control test to establish that freezing reflects learning of the association and is not arbitrary. In this paradigm the cue (CS) is presented after the aversive stimulus (US) has already been presented, so that it does not predict the foot shock. If the animal freezes to the tone when it has been trained in the backward trace conditioning, it suggests that the freezing is not due to associative learning.

The ability to determine what, and if an animal learns when exposed to novelty is an important tool for behavioral neuroscience. The major brain areas shown to be involved in contextual and cued fear conditioning include the amygdala, hippocampus, frontal cortex, and cingulate cortex. This test allows, for example, to evaluate the effect of lesions to these areas (or other manipulations) on learning.

The test apparatus consists of a chamber with an electrifiable grid floor, a shock generator, a sound generator, and a video monitoring system. Cued tests can be performed in another chamber with different properties from the conditioning chamber, or the same chamber may be modifiable such as to allow to change the sensory cues as much as possible so that the animal perceives it as a new context unrelated to the conditioning chamber.

The apparatus used for the conditioning and context test consists of an acrylic chamber with an electrifiable grid floor, a calibrated shock generator, and a sound source. The size of the chamber is not critical and various chamber sizes are used (33 cm x 25 cm x 28 cm, for example, Shoji et al, 2014), also depending on the species to be tested. The properties of the chamber allow for it to be easily cleaned and to easily monitor the animal.

Generally, a differently shaped chamber is used. If the same chamber is to be used for both contextual and cued conditioning, it is made adaptable to make the context distinctly different when changing from contextual to cued conditioning. The chamber can be made different by changing the floor (e.g., from steel bars to a solid plastic), and/or changing the interior dimensions by adding a diagonal divider or a transparent cylinder, for example.  Additional plates are included in order to allow this transformation.

In addition, different lighting and/or olfactory cues should also be provided to the mouse; the odor can be changed by using a diluted food essence, for example. The auditory cue is the same as that provided at the time of conditioning.

Animals can be monitored either visually (live or through the use of a video system) or by incorporating a movement monitoring system to reliably measure freezing behavior. Each chamber can be equipped with a video monitoring system paired with the Noldus EthoVision© XT software for automatically detecting freezing states. Recording the test has the advantage of enabling the researcher to review and reanalyze an experiment. The white noise/sound cue and foot shock generators can also be automatically controlled.

Pre-training for the fear conditioning chamber

The apparatus should be placed in a soundproof or quiet room to minimize external noise during the tests; animals should also be housed in a different room. This prevents the animals that are not being subjected to a test from hearing an auditory cue or the vocalization of the test animals.

Animals should be calm before the test. A long habituation period (60–90 min) to the new environment should be allowed if the location of animals is changed before testing.

If more than one chamber is being used simultaneously in the same room, the stimuli must be synchronized so that any noise leakage and response to shock will not affect the other animals’ behavior.

When possible, it is preferable to run a set of animals from a single home cage all at once. This prevents previously tested animals from affecting the behavior of cage mates. Therefore, if four training boxes are available in the conditioning room, animals should be housed four per cage.

Before starting, and between animals, the apparatus should be cleaned, always with the same solution (e.g. 70% ethanol) to allow all sets of animals to experience the same odors. The chamber should be continuously illuminated during testing.

Allow a 2 min habituation period before beginning the trials so that the animal can explore and take in the aspects of the chamber.

A tone (auditory) cue is then presented (15–30 sec). If only contextual fear conditioning is to be assessed, the tone (CS) is not presented during conditioning.

A mild foot shock is administered during the last 2 sec of the tone presentation and co-terminates with the tone (1–2 sec).

After the shock presentation, an interval (60–210 sec) precedes a second identical trial.

Following the final shock presentation, remove the animal in a 30–60 sec time period after the last trial. Animals should be handled gently due to the fact that they have had a stressful experience and to avoid influencing the consolidation process.

The contextual conditioning testing should be conducted as similarly to the training session as possible to maximize context conditioning. This includes odor, lighting, time of day, etc. The testing chamber should be cleaned out as in the conditioning session. No tone cues are presented.

Place the animal in the chamber for 3–5 min; its behavior is monitored for the presence or absence of freezing responses.

Animals should be removed promptly at the end of contextual testing and returned to the original home cage.

If cue testing is being carried out in the same chamber, it should be altered to be different in size, lighting intensity, background, floor texture, and odor. It is important to clean the chamber thoroughly.

For the cued conditioning trial, place the animal in the chamber and allow it to habituate for 3 min. The same intensity tone cue used in the conditioning session is then presented for the next 3 min. One additional minute of monitoring without the cue is taken before the animal is removed.

Trace conditioning is carried out similarly to delay conditioning, but with the foot shock being administered after the tone presentation has ended (trace interval, 2–60 sec).

Trace conditioning requires more trials (e.g. five trials) for the animals to associate the CS with the US. A variable interval time should be used between trials to minimize the expectation of a new trial.

Day 2 testing for freezing to the context and cue are carried out as in delay conditioning.

The use of backward conditioning is an appropriate behavioral control to show whether the learning taking place is a true measure of either delay or trace conditioning.

Modifications frequently applied to the Fear Conditioning chamber are designed to fit the species used and the experimental needs.

These include changes in the interval between the CS and the US in trace conditioning, for example. As the trace interval is increased from very short intervals of 1–2 sec to 15, 30, or 45 sec, the degree of associative cue learning is reduced (Curzon et al 2009).

The type, intensity, and duration of the US may also be adapted, thereby determining how aversive it may be.

If video monitoring is used, the chamber can be opaque, decreasing the influence of possible visual stimuli on the test.

The data obtained from the Fear Conditioning Chamber is generally visualized by graphing the duration of the freezing response, expressed as the percentage of freezing time. It may last for seconds to minutes depending on the strength of the aversive stimulus, the number of conditioning sessions, and the degree of learning achieved by the animal. This measurement can be compared across the control and disease or intervention groups to assess the rate of acquisition and/or effect of drug treatment in the conditioning session. 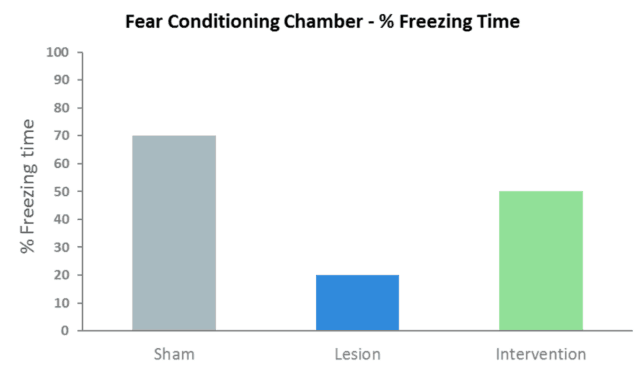 Using graphs similar to this to compare the freezing time between different disease or treatment groups allows for easy visualization of the effect on associative learning. Animals with lesions or pathologies affecting brain structures involved in learning will spend less time in freezing behaviors due to a poorer associative learning ability. The use of effective drugs or interventions can induce an increase in freezing behaviors.

The main limitation of the Fear Conditioning Chamber is its sensitivity to a stressful environment or handling. This can be overcome by minimizing stressful factors. For example, animals must be disrupted as little as possible when moving them in and out of the room or the testing chamber; the apparatus should be placed in a soundproof or quiet room to minimize external noise during the tests; animals should also be housed in a different room to prevent them from hearing the auditory cues or vocalizations from the test; when multiple chambers are used simultaneously, stimuli must be synchronized;  when possible, a set of animals from a single home cage should be tested simultaneously;  variations in sensory stimuli must be avoided as much as possible and tests should be performed always at the same hours.