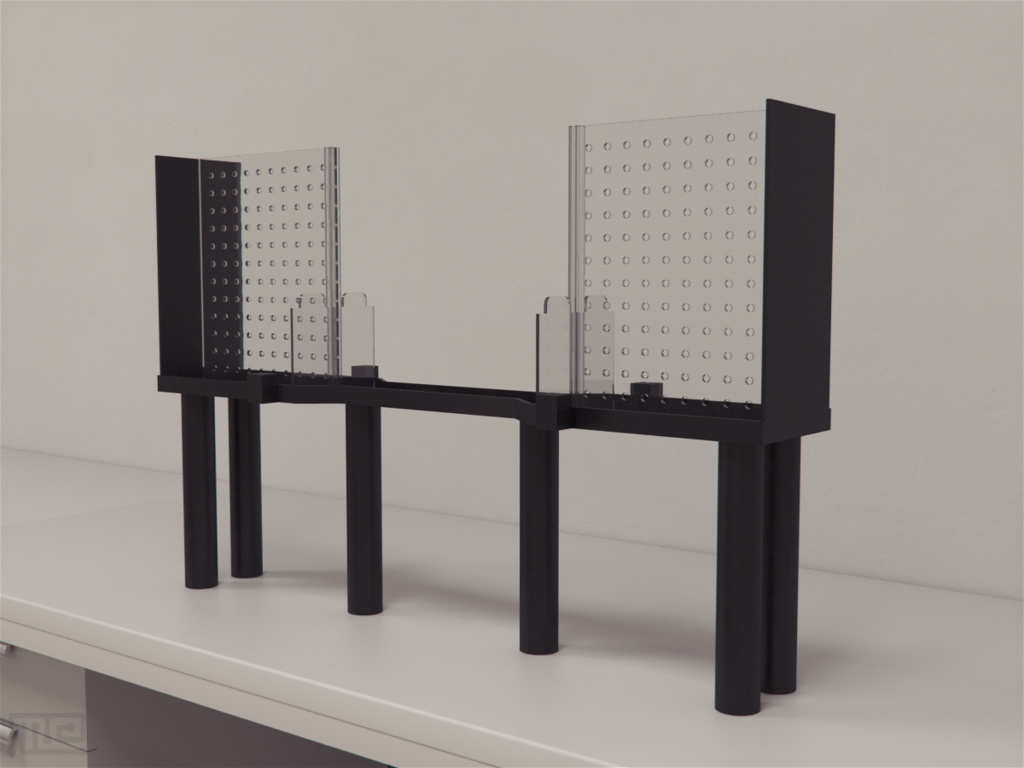 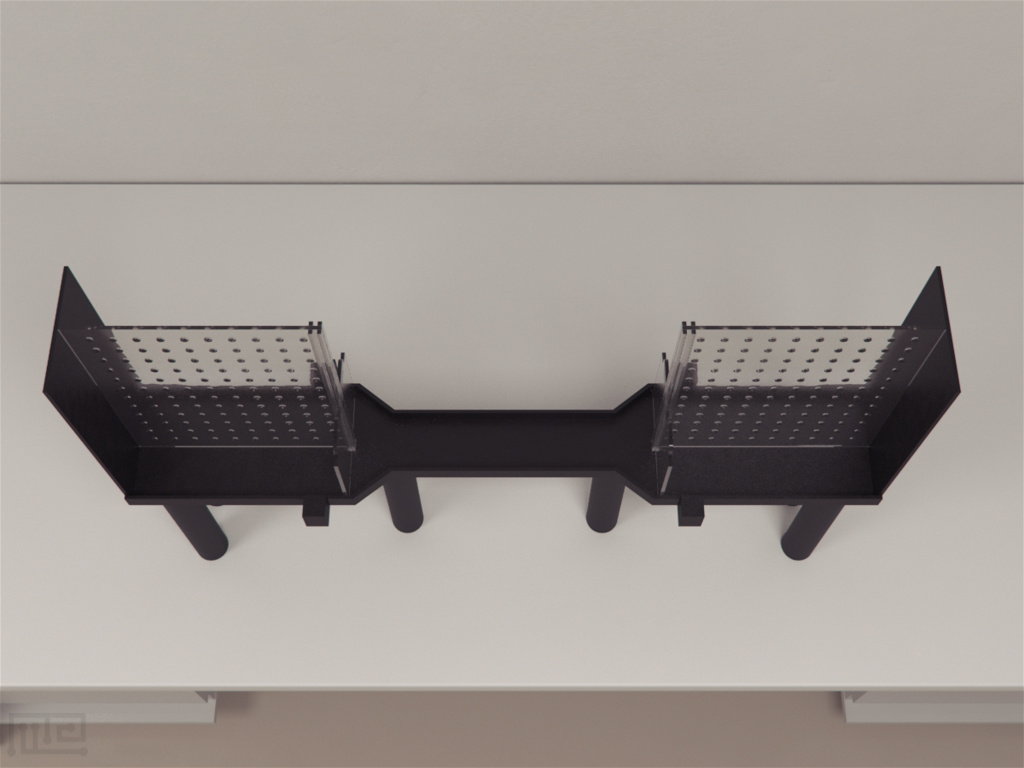 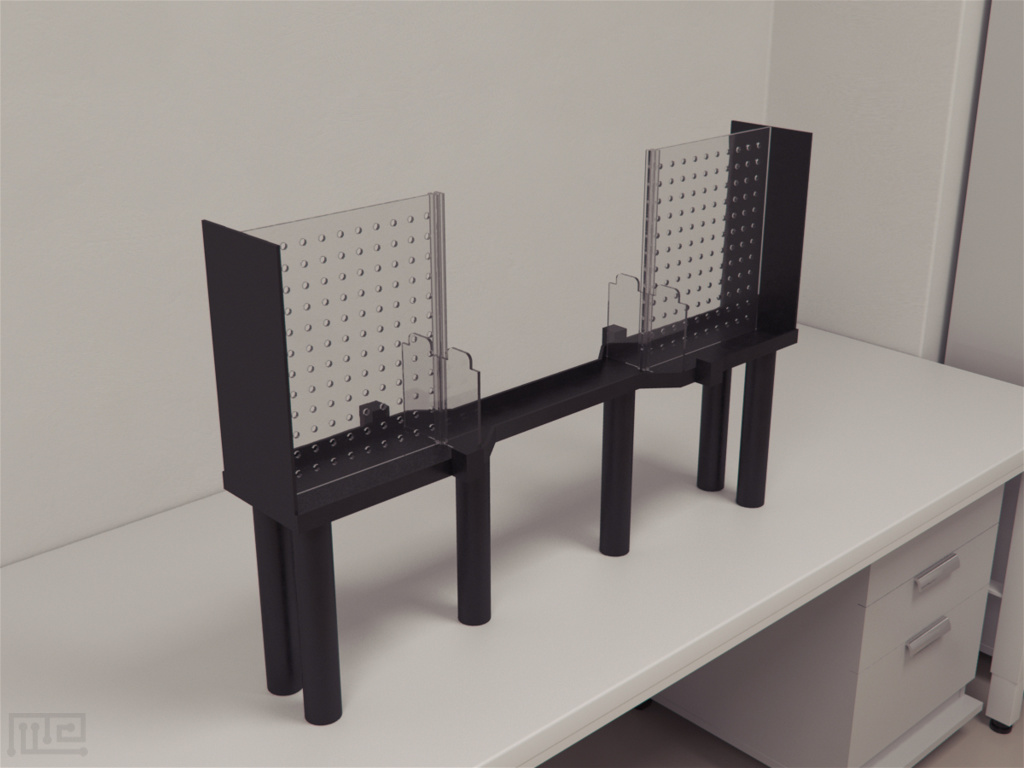 Fictive Reward Maze is a learning task that involves studying and observing surroundings and making adaptive future choices accordingly. It tests learning capability of the subject to analyze and compare reward and punishment without actually experiencing them.

The maze is linear, elevated and consists of two start boxes and goals respectively. At the start of the test session, the subject is placed in the start box, and auditory sounds are ringed. The number of sounds reflects the magnitude of the reward. The subject leaves the start box and arrives at the chosen target to receive the actual reward. The fictive reward is served in the unchosen goal that is visible through the transparent wall.

The purpose of this task is to assess the cognitive ability of non-primate animals, such as rodents, to adjust future behavior on the basis of past learning. This phenomenon is widespread in the animal kingdom and requires advanced cognitive aptitude.

Fictive Reward Maze is developed by Ko-Un, Namjung, Yunsil, Daeyeol, and Min (2015). Researchers were keen to study whether fictive reward induced regret in the animal and forced it to modify future decision for personal gains. They found that while rodents unequivocally possess and demonstrate the behavioral modification, the effect is transient with fictive reward.

Fictive reward maze is an elevated liner track that has dimensions of 100cm x 16cm x 30cm. It has a central track (40cm x 8cm) and two start and goal boxes (30cm x 8cm). Each box has a sliding door and a photobeam sensor. A transparent acrylic wall (0.5cm x 35cm) separates each box from the other. The wall contains 117 holes (diameter 0.6cm). The entire maze track is bordered by walls (2cm) that increase in height at the ends (35cm).

The subjects are kept in their home cages with ad libitum food and water supply. A 12/12 light-dark cycle is maintained in the room. Training and behavioral task sessions are carried out in the dark.

Only one start box is used per session; the door of the other is kept closed. Both goal doors remain operative throughout the task. All doors are automated. The subject movement is monitored by photobeam sensors and Noldus EthoVision® XT. The reward is one, three or five sucrose pellets that are delivered with auditory stimuli (1-9KHz), i.e., 1, 2 and 3 bells for 1, 3 and 5 pellets.

Behavioral pre-training comprises placing the subjects in the maze to explore it for 5-9 days fully. Following acclimation, the animals go through shaping period which involves getting reward with auditory notes, i.e., initially at start box (for 5-7 days of pre-training), then at goal box (for 10-14 days). At first, the animals are forced to move to a randomly chosen goal post; later trained to pick either of the goals themselves. Pre-training involves 90 trials per day and spans 10-14 days. The training goes on until more than 70% of the subject choices are based upon the anticipation of larger reward.

The food supply is then gradually curtailed over the next seven days in order to reduce and maintain the weight at 80-85% of original body weight.

When the subject reaches the goal, all doors are closed, and the reward is delivered; first at the unchosen goal (fictive reward), then at the chosen goal (actual reward).

After one second, the three operating doors are re-opened allowing the subject to move back to the original start box. The return to point zero concludes the trial.

Each animal receives 90 sessions in total (2 sessions per day); each session has 30 trials; each trial one second apart.

Fictive Reward Maze is an instrumental learning task that evaluates the ability of non-primates to learn not just from experience but also by observing the reward or punishment. This practice improves learning and decision making and provides value-guided future choices. (Ko-Un et al., 2015)

Little research has been done to investigate the neural mechanisms mediating the behavioral choices. Fictive Reward Maze can be a useful paradigm to study neurons in the anterior cingulate cortex that preside the actions, their consequences, and subsequent behavioral changes. Hayden, Pearson, and Plat (2009) employed a behavioral choice task and found that ACC neurons play an important role in relaying information about fictive reward and outcomes of action not taken.

Steiner and Redish (2014) studied “regret” behavior in rats in a “wait or skip choice” task. Rats that chose economically high-cost reward regretted and looked back toward the missed opportunity. Neuronal monitoring revealed activation of the ventral striatum and orbitofrontal cortex in rats experiencing regret. In humans, the same neuronal pathway is activated during expression of regret, but patients with damage to orbitofrontal cortex do not express regret.

The maze can provide useful insight into neuronal disorders in humans and subsequent surgical or therapeutic intervention.

Ko-Un et al. (2014) employed Fictive Reward Maze to study choice behavior across test sessions. The subjects were seven rats 9-11 weeks old, housed initially in home cages, then trained in the maze. The tasks were based on auditory cues and carried out in the dark in a way that only the peculiar number of sounds guided navigation from the start box to goal.

The analysis of test sessions revealed that animal’s choice was influenced by the magnitude of reward. The rats were quick to learn and able to modify future choices based on the comparison of actual and fictive reward. However, the effect of the fictive reward was temporary and evaporated quickly. The effect of the actual award was long lasting and evoked value learning system in the brain.

The findings of the present study are consistent with earlier studies in humans and primates. It is a well-established fact that human behavior is largely determined by the actual or fictive outcome. Studies have shown that nonhuman primates with advanced intellectual aptitude, such as monkeys and chimpanzees, are chiefly drawn towards targets that promise large fictive awards. (Hiroshi & Daeyeol, 2011)

Hayden et al. (2009) found that the ability to make a rational decision is not unique to humans and primates only. Other species, incapable of highly-advanced cognitive capacity, such as rodents, also exhibit observational and analytical decisions and make behavioral modifications accordingly.

Following choice behaviors are observed during each test session:

The probability of stay is plotted against the run-length, i.e., the number of consecutive choices for the same goal.

The layout of the maze is simple prompting rats to acquire knowledge quickly. It is closest to natural settings allowing the animal to choose the best option by considering all possible outcomes.

The pathway is wide and allows free run without fear of tripping and falling, particularly when training and behavior tasks are performed in the dark. The walls, bordering the entire length of the track, provide additional security.

The plain color scheming of the apparatus permits quick acclimation without inciting fear or anxiety in subjects.

The apparatus is linear and straightforward facilitating easy handling. It does not require repeated and rigorous cleaning after every test session.

The transparent wall between two goal locations allows full view of the reward the subject might have received (fictive reward) if it made the alternate choice. This view influences the future choice of the animal both in training and test sessions and helps calculate results with more accuracy.

Animal training is lengthy and requires weeks before test sessions can be carried out. Over-engaging over multiple days can stress and tire the animal.

The tasks require food deprivation and weight reduction. In behavioral studies, food deprivation is a routine practice to produce motivation to eat. However, studies suggest that weight loss may not prompt animals to feed in all cases (Silke, Katarina, Heidrun, Jan, & Jörg-Peter, 2016). Deprivation-induced anxiety and stress can affect the performance and results.

The test sessions are carried out in the dark cycle only. Flexibility in design and conditions will allow investigating rodent learning behavior in the light cycle.