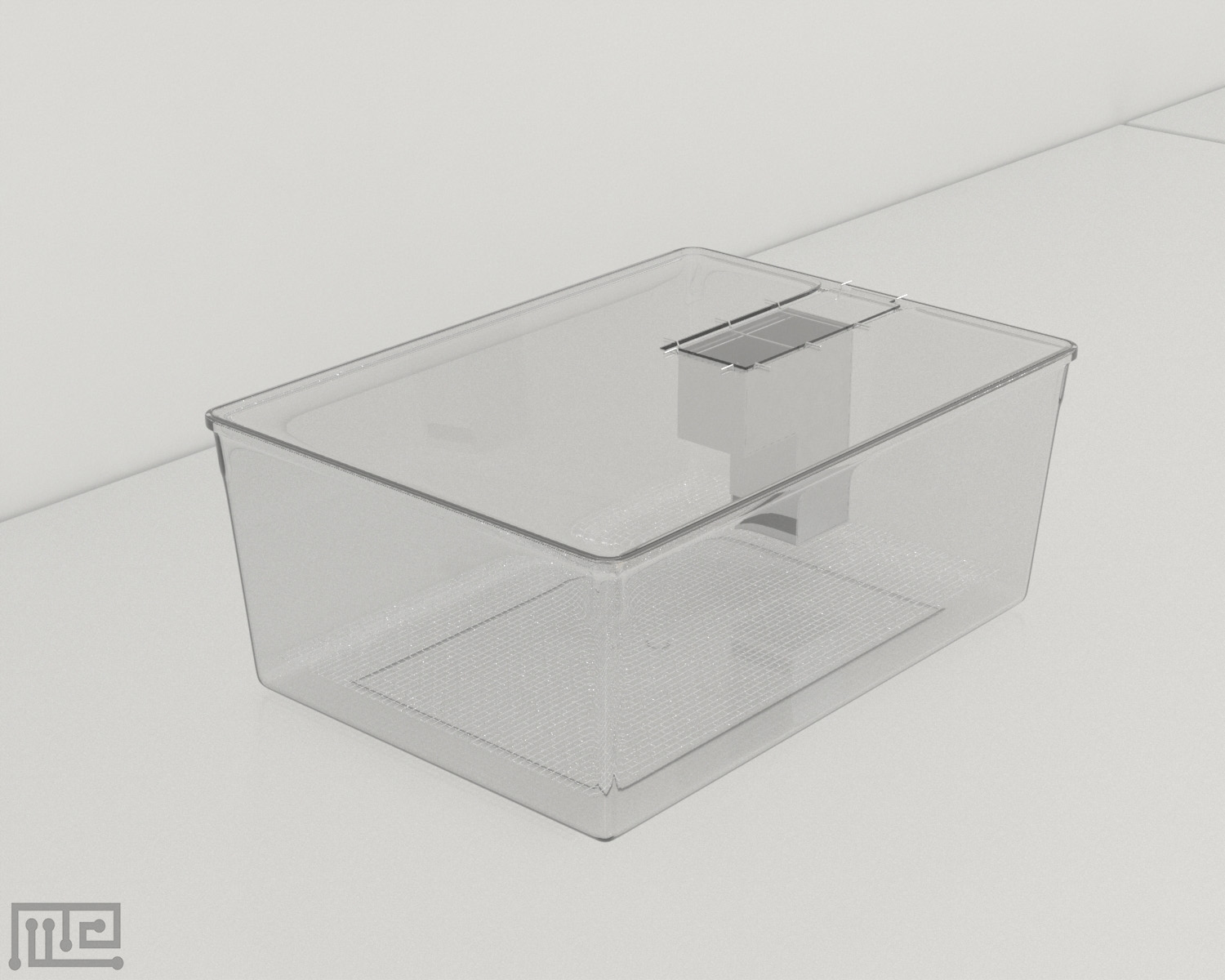 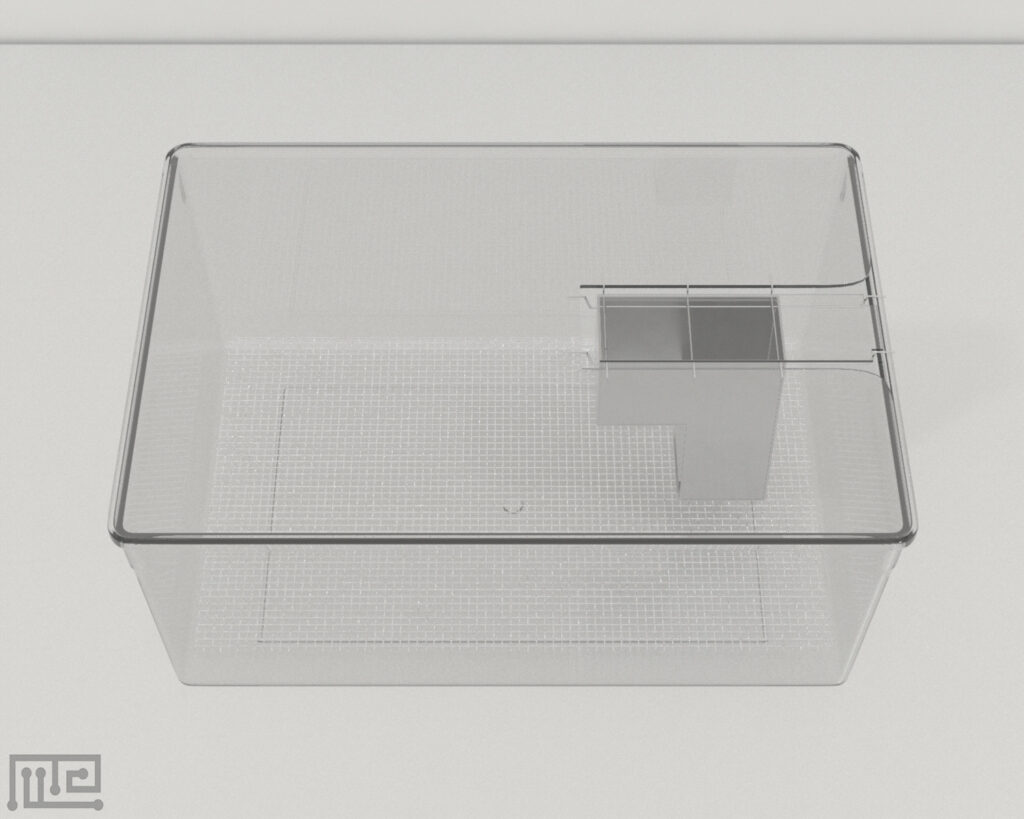 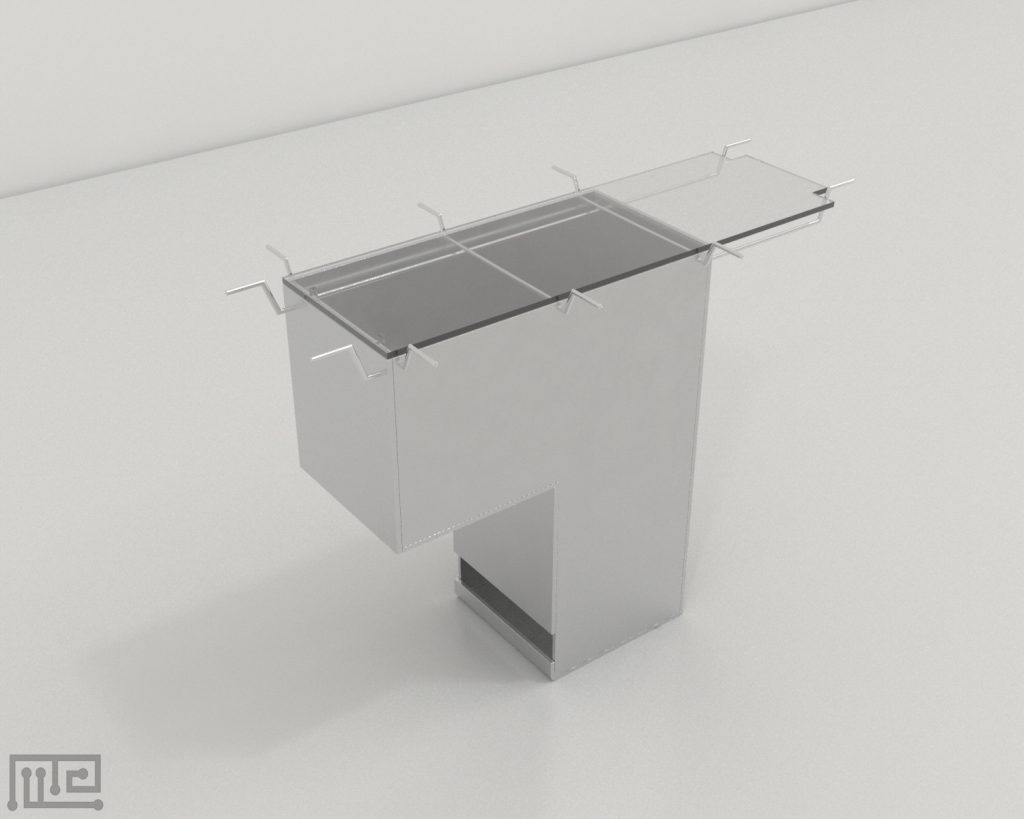 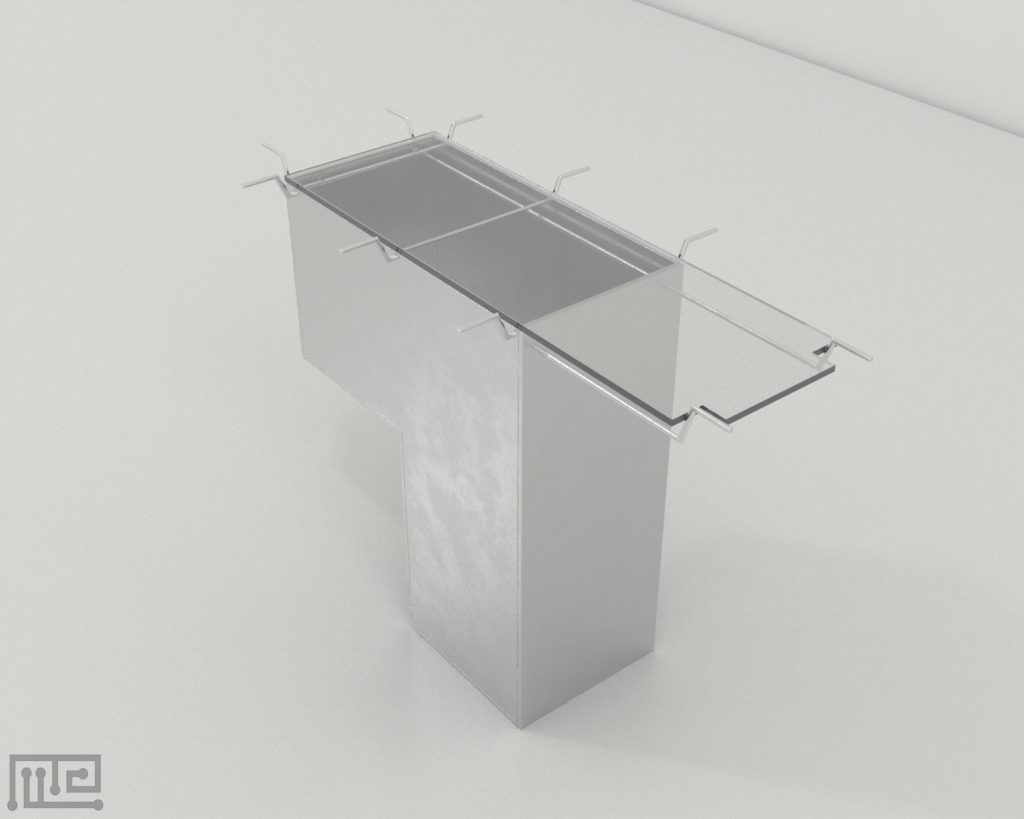 The Food Hopper was used by Spiteri, Nello J. (1979) to behavioural effects of oestradiol in the female rat.

Rats were housed individually in plastic cages. Coprophagia was prevented by a removable galvanised wire grid above the bottom of the cage.

Dry, powdered food (Rat and mouse maintenance diet No. 1, BP Nutrition , Witham) was available in a metal food hopper, which was attached to the top of the cage, but easily removable. The bottom of the hopper was above the metal grid .

The Food Hopper is used to measure food intake and monitor the feeding patterns of rodents. The rodents differ in their feeding patterns, and their food consumption can be affected by the administration of several food inhibitors and food stimulators such as appetitive suppressants and peptide hormones (Naef & Woodside, 2007; Wellman, 2008). The Food Hopper can effectively and easily be used to measure food intake in rodents by weighing it before and after food ingestion trials. It is made of metal and shaped like an upside-down “L.” Since spillage also contributes to the weight of the food, the particular L-shaped design helps keep spillage down to a minimum. Furthermore, the Food Hopper also comes with a plastic cage that is designed to help collect spillage. A galvanized wire grid is placed 2 cm above the bottom of the cage, and the Food Hopper is placed 1 cm above the wire grid. Any spillage falls beneath the wire grid and can easily be collected and weighed. Even though the Food Hopper comes with a cage, it can easily be removed to deprive subjects of food according to experimental needs or be attached to any other cage.

Apart from measuring the effects of different substances on food intake, the Food Hopper can also be used to measure food preferences in subjects, which is an important factor that can affect many experiments (Vento, Swartz, Martin, & Daniels, 2008). Different types of food can be placed in the Food Hopper to observe differences in food consumption and feeding pattern behaviors in the subjects. Moreover, the Food Hopper can also be used to observe the effect of brain lesions, pharmacological manipulations, and diseases and disorders on feeding behaviors.

Other apparatuses used to study rodent behavior include the Linear Maze, the Dig Task, and the Puzzle Box.

Routinely fill the Food Hopper halfway. Appropriately light the cage. A tracking and recording system such as the Noldus Ethovision XT can be used to assist with observations.

The following is a sample protocol used to measure the amount of food consumed after a period of food deprivation in rats.

Investigation of the effect of mazindol on food intake in rats

Wellman (2008) investigated the suppressive effect of mazindol on food intake in rats. Ten male Sprague-Dawley rats were used in the experiment and housed in individual cages that contained a Food Hopper. The Food Hopper contained 110 grams of soft pellet diet and was weighed at the start and end of a 3-hour food intake period. The food intake of the subject was monitored using 12 feeding modules that consisted of a Food Hopper, a load cell, and hardware/software. As the subjects consumed food, movements of the Food Hopper was detected on the load cell. A software program then analyzed the subjects’ meal pattern data. The subjects were acclimated to the colony room seven days before testing. On days 5-7, the subjects received daily sham injections (IP) of 0.9% saline (1 mL/kg), 10 minutes before food ingestion. The experiment was performed over six days in which the subjects received a different dose of mazindol (0, 0.25, 1.25, or 2.5 mg/kg) on the four drug test days. The subjects received continuous access to food and water for 21 hours after testing, which served as the two inter-trial test days where eating and drinking were recorded without drug administration. During drug test days, injections were administered 10 minutes before food ingestion trials, and testing was performed for 3 hours. The results of food intake and water intake by the subjects indicated that mazindol produced a dosed –dependent suppression over the 3-hour food intake period. The food intake at each of the mazindol doses was significantly different from the 0 mg/kg mazindol dose. The water intake at each of the mazindol doses also significantly decreased relative to that of the 0 mg/kg mazindol dose. Furthermore, mazindol administration also produced a dose-dependent suppression in average meal size.

Spiterri (1979) investigated the anorexic effect of oestradiol benzoate on food intake in ovariectomized female rats that had been food-deprived. Sixteen female hooded rats that were 120 days old were ovariectomized a month before starting the experiment. The rats were equally divided into two group cages and were transferred to individual plastic cages two weeks after ovariectomy. The rats were housed in reverse lightroom that has a 12 hour light and 12-hour dark cycle. The experiment was then performed over two weeks, in which the subjects were divided into control and experimental groups. The experimental group was treated with oestradiol benzoate using Arachis oil as the vehicle for injection, while the control group was only treated with Arachis oil. The subjects’ food intake was measured a day before food deprivation. On the food deprivation day, the Food Hopper was removed from their cages at 14.00 hours. The subjects were then injected with either 0.5 µg oestradiol benzoate in 0.1 ml Arachis oil or 0.1 ml Arachis oil. On the next day, the subjects were reinjected with the same substances at 9.00 hours. The Food Hopper was placed back into the cage at 14.00 hours, and the subjects’ food intake was measured over 24 hours. The subjects’ received no treatment over the next seven days for the hormones to eliminate from their bodies. After the seven days, the experiment was repeated; however, the treatment was reversed between the two groups such that the experimental subjects were now the control, and vice-versa. The results indicated that the control group consumed more food than the experimental group. The suppressive effects of estradiol benzoate on food intake were even seen after 24 hours of food deprivation.

The following can be observed using the Food Hopper:

Factors such as age, gender, and strain of the subject may affect task performance. Food preferences and food quality may affect food intake by the subjects.