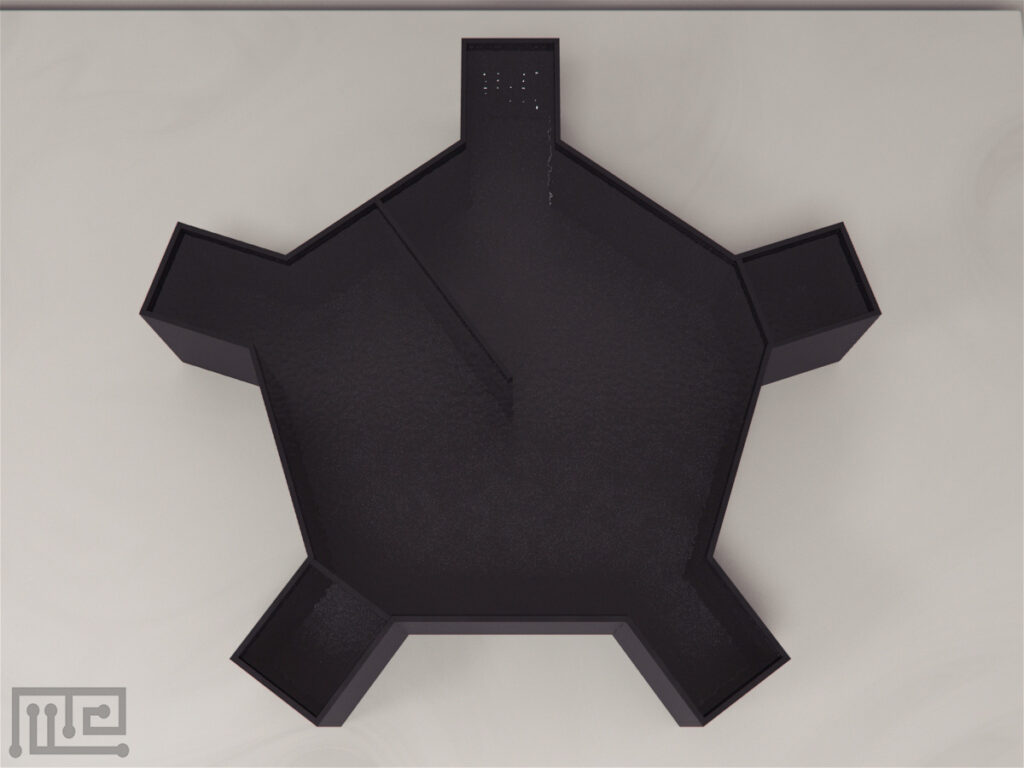 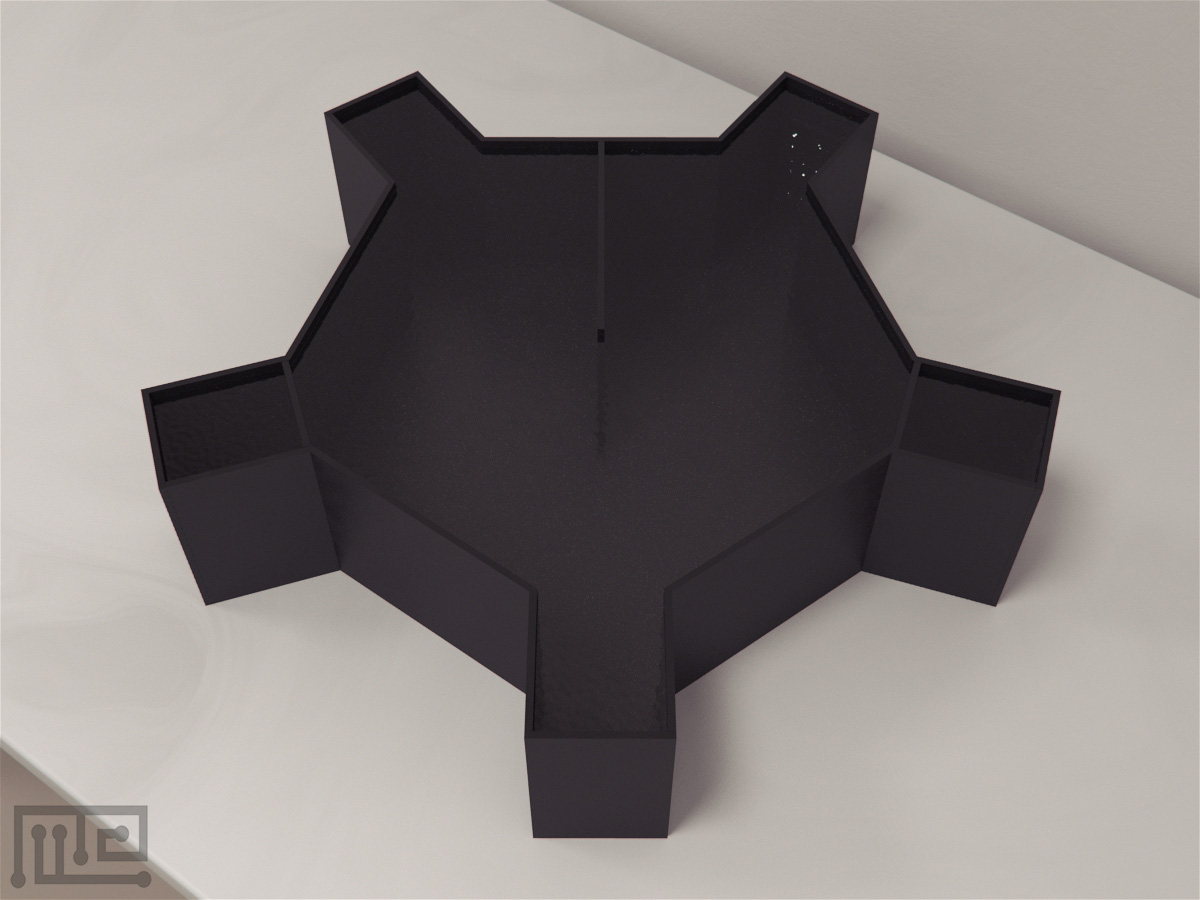 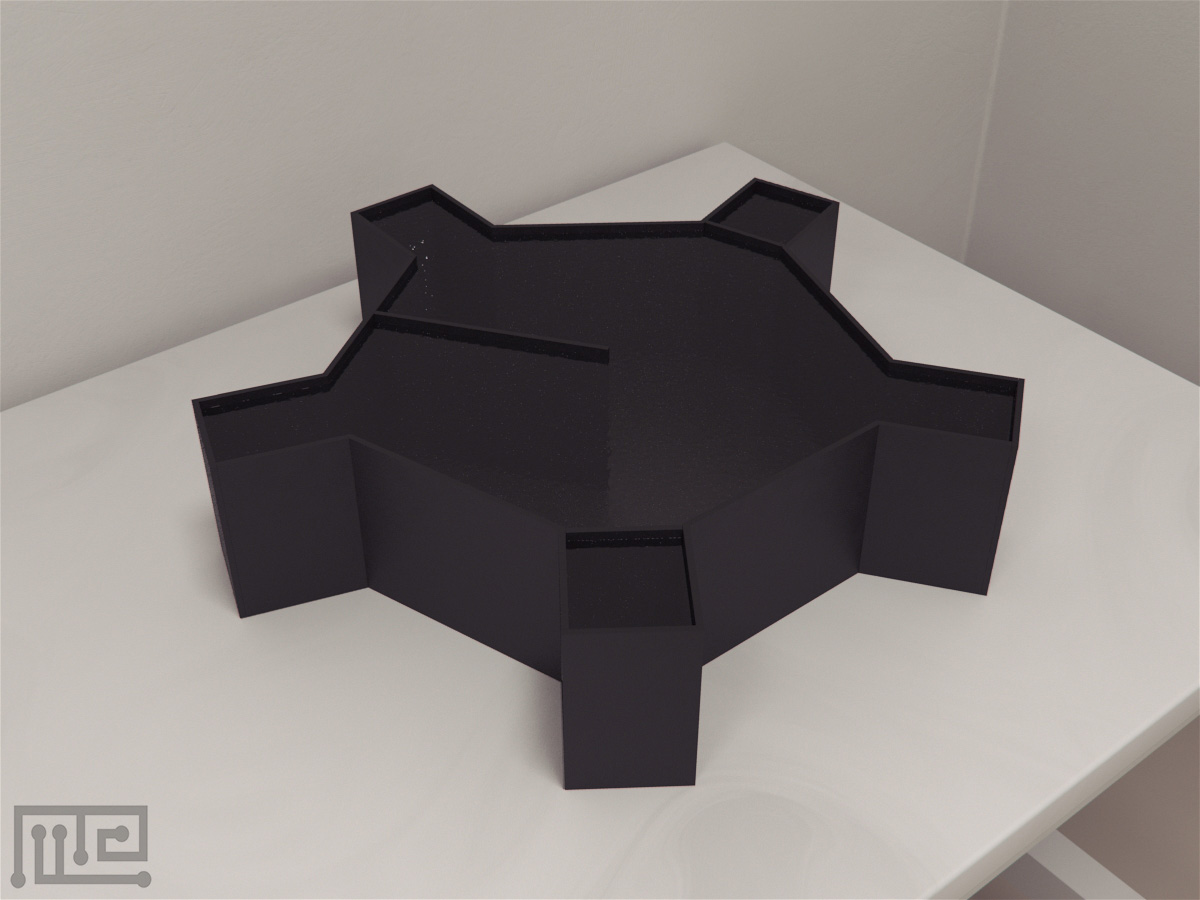 The Forced 2-Choice Maze is used in a behavioral task to train rodents to overcome their natural aversion of light. It was used in an experiment by Benjamin M. Gaub et al. (2015), to test the functionality of rhodopsin for vision restoration in the rd1 mouse.

The Forced 2-Choice maze was modified from a Radial Arm maze by blocking two of the five arms of the maze and adding a divider to separate the two potential ‘escape arms’.

One arm termed the illuminated arm, is lit by LED arrays; the other, called dark arm, remains unlit.

Mazeengineers offers the Forced 2-Choice Maze for both mice and rats. Custom coloring and customization  are available upon request.

Forced 2-Choice Maze is a behavioral task that is used to train rodents to overcome their natural aversion of light by associating it with reward. It involves injecting opsin into the blind rodent’s retina. Rhodopsin expression restores vision and innate light avoidance in blind subjects. The rodents are then lowered into a forked-shaped maze where cues of light indicate the reward platform. Swimming toward reward platform proves active vision and overcoming of light aversion.

Forced 2-Choice water maze is developed by Gaub, Berry, Holt, Isacoff, and Flannery (2015). It is a Y-maze modification of Morris water maze and consists of a forked environment where blind mice are tasked to swim to the escape platform. A right choice leads to the illuminated arm associated with reward; a wrong choice leads to the dark arm or delays.

The maze is used to assess optogenetic gene therapy in rodent models and can provide valuable information for retinal dystrophies such as choroideremia, Stargardt’s disease neovascular AMD, Usher syndrome type 1B, and Leber congenital amaurosis type 2. The pre-clinical testing and optimization data have applications for gene replacement or augmentation therapies.

Forced 2-choice water maze is similar to radial arm maze except two of the five arms of the maze are blocked. A divider (dimensions: 25cm x 25cm) separates the two escape arms. The light intensity at the divider is maintained at 0.1 mW/cm2 – 1 mW/cm2.

Clean and illuminate the maze. Fix Noldus Etho Vision® XT at the top to record and analyze the movement and performance. Divide subjects into three groups; wild-type (WT) mice, rhodopsin-treated retinal degeneration 1 (rd1) mice and control (sham-treated) mice. Habituate all groups to the maze for 2 days. Acclimation comprises free swimming and searching for the hidden platform in the maze.

Inject rhodopsin into the retinal ON-bipolar cells to evoke vision-guided behavior and instill innate light aversion in the subjects. Rhodopsin is a biological pigment that provides vision acuity in low lights. It is found in the retina and G-protein coupled receptors (GPCRs).

Gaub, Berry, Holt, Isacoff, and Flannery (2015) housed blind mice on a 12/12 LD cycle with ad libitum supply of food and water. The mice were anesthetized, their pupils dilated and injected with adeno-associated viruses (rAAv), i.e., the 2µl volume contained 5×1011 of viral genomes. The tip of the injection needle was left in the eye for >60 seconds to permit homogenization of drug with fluids and reduce the chances of efflux.

The mice were tested on Forced 2-Choice Maze. Control mice could not reach the threshold required for passing the test (70%); Rd1 mice showed improvement after 4 days and reached learning threshold on day 7 of training; WT mice quickly improved performance and mastered task by day 4.

The mice were further tested to distinguish between static and moving light patterns by conditioning them to associate a marching bar of LEDs (cue) with electric foot shocks. The mice had to distinguish the marching light from the static decoy stimulus consisting of a still LED bar. Mice were acclimated to the chamber, conditioned and tested for memory. Conditioning connected a mild foot shock with a dynamic light pattern; memory testing involved the same light pattern without electric foot shock. The mice movement was recorded, and freezing behavior was scored. Of all rodent groups, RD1 mice showed the best performance in term of detecting and distinguishing patterned from nonpatterned light.

All mice were later euthanized and their eyes extracted. The researchers removed cornea, incubated it for 2hours and applied primary and secondary bodies. The excised retina was mounted on a slide with the nucleus stained. The images were taken with microscopy in the recording chamber. The cell responsiveness and firing rates of neurons were monitored.

Based on animal behaviors, the following choices qualify for task success or failure:

The Forced 2-Choice maze task provides easy training for rodents, particularly those with compromised vision. Despite lacking the ability to see clearly, various species of rodents can master the maze within a fortnight.

Since the task tests vision acuity of the animal, it does not hold food and water supply. Although food and water restriction is often used as a promoting factor, Pieter, Sandra, Annet, Tobias and Mark (2018) have shown that diet restrictions can affect animal wellbeing, performance, task acquisition, and activity patterns.

Since Forced 2-Choice maze is a variant of Morris water maze, it qualifies for a reliable tool to assess scores. Morris water maze is one of the most widely used and reliable mazes in behavioral neurosciences. The innate tendency to escape the aquatic environment serves as the natural promoter of performance in the rodents.

The small size of the platform allows a quick escape from the stressful water environ. The escape platforms provide sufficient space to stand and rest. Also, pre-training involves practicing in clear water in which the platform is visible. On the test day, the memory helps a great deal in quickly locating the safe zone.

The aquatic environment of the maze is stressful for the animal. Stress can be physically and mentally fatiguing and ultimately result in compromised performance.

Maintaining water temperature is vital in such tasks to ease the stress of the animals. Too cold or too hot water can be equally damaging for the animal and its performance.

Forced 2-Choice water maze needs to be further tested in other strains of rodents with blindness because a number of factors such as strain, age, gender can affect the performance.