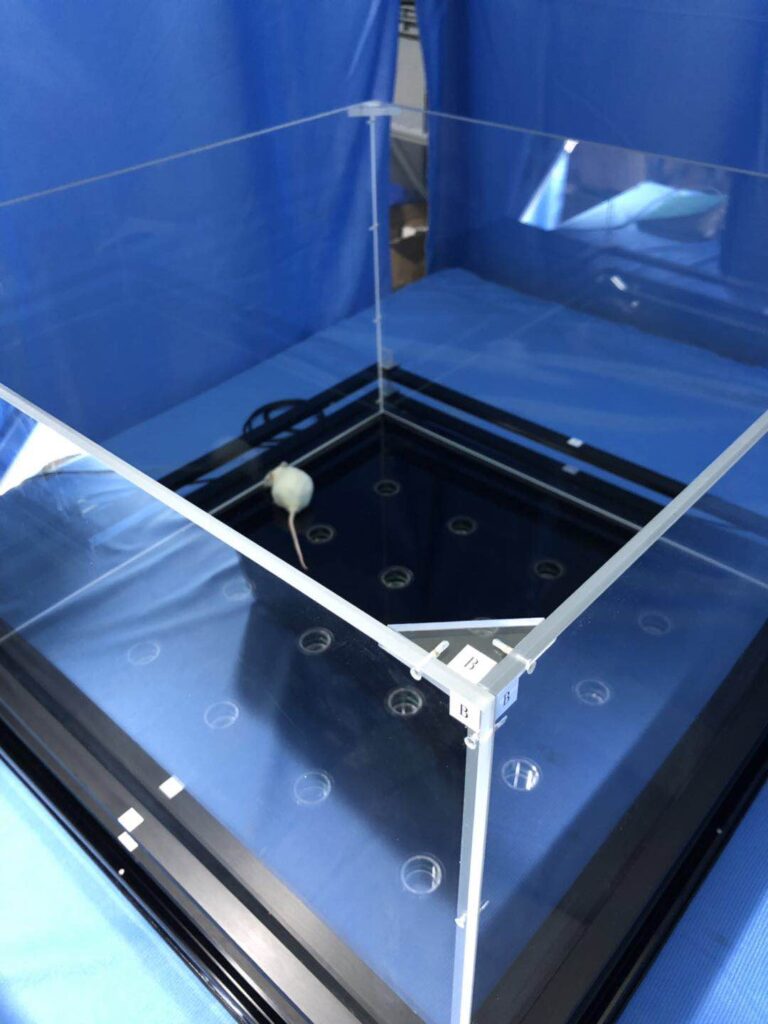 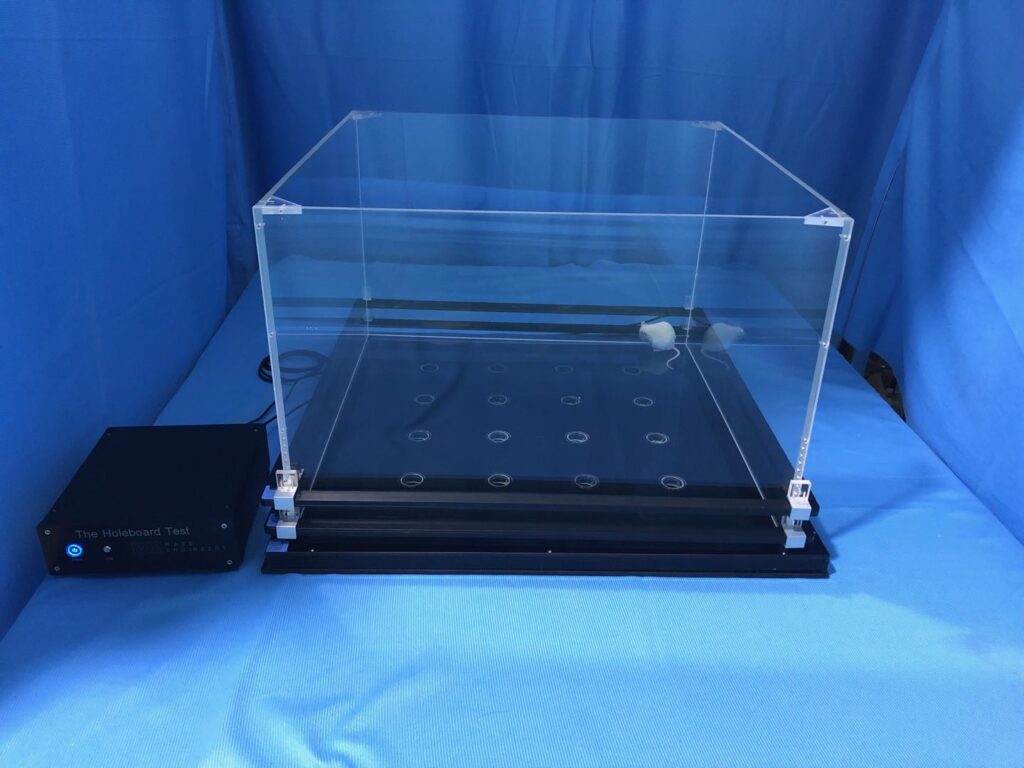 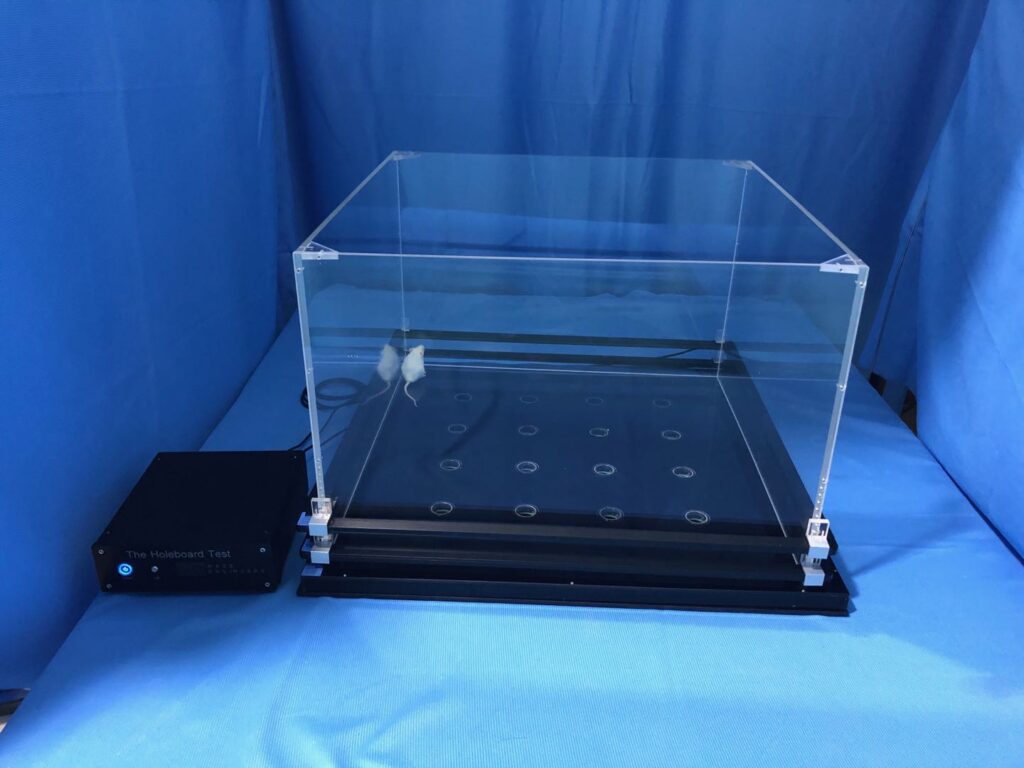 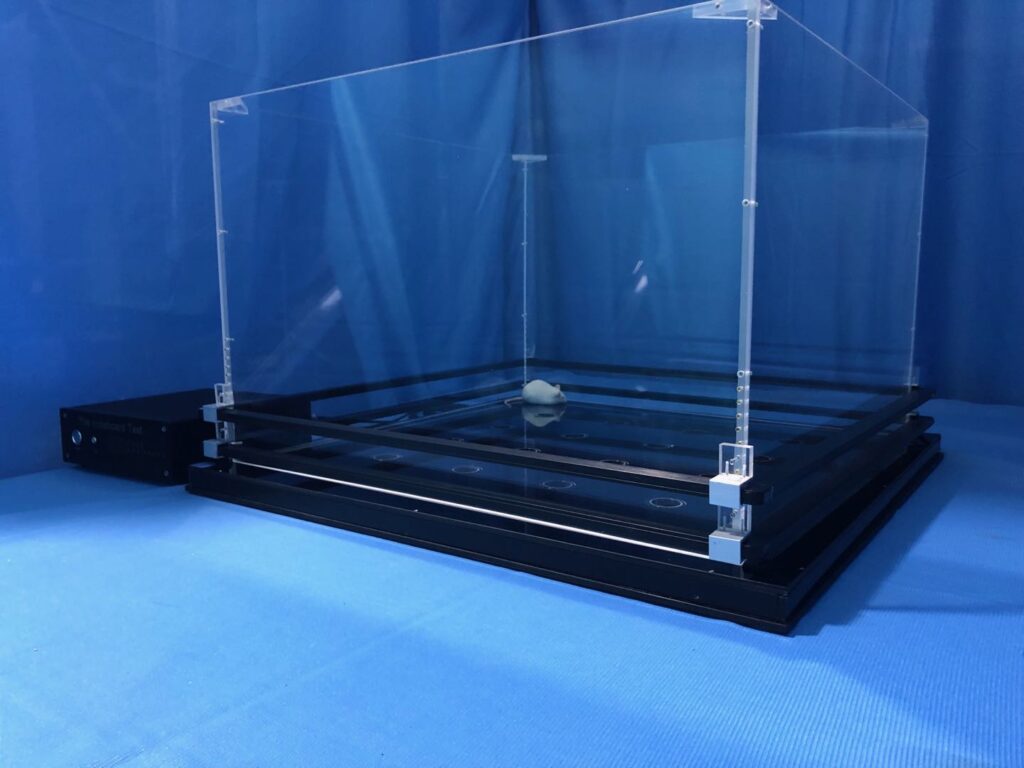 The General Rodent Activity System is an automated system used to observe, record, and analyze rodents’ locomotor and behavioral activity levels. The Activity System consists of an open field box, surrounded by an outer area divided into quadrants with the activity integration that reports the animal location. It is an adapted version of the Open Field arena and Hole Board apparatus and also includes sensors for recording and software for analyzing rodents’ behavior.  It can measure the subject’s locomotion, behavioral activity levels, for behaviors associated with anxiety, exploration, thigmotaxis, and working and reference memory.

The system includes the Activity Hole Board.

Tracked paths in real-time and throughout the experiment. A visualization of the path made by the animal subject is observed within the software under activity data using X and Y coordinates (see the image below ).

Users can choose a time interval post experiment and draw an activity chart indicating the location, number, and timing of jumps as time, and count points. For example, (10,4) indicates 4 jumps within 10 seconds. The following results are recorded:
When a jump occurs
When the animal moves without a jump
When the animal moves while in the jump position
Number of times the animal jumped during a given duration

Number of nose pokes, locations, sequence of, and time taken for a head dip are recorded. Time stamps in milliseconds record which hole a head dip begins and when it ends to create head dip duration. The following activities are recorded:
The location of the hole in which the subject dipped its head
The sequence of head dips
Duration of the head dip

The Activity System is an automated system used to observe, record, and analyze rodents’ locomotor and behavioral activity levels. The system is an adapted version of the Open Field arena and Hole Board apparatus and also includes software for analyzing rodents’ behavior. It can report the animal’s location and records when an animal moves with a jump and without a jump. Moreover, the experimenter can set a time interval for recording the number of jumps in a given time period, which is illustrated in a “Jump Chart”. The software also provides a visual illustration of the animal’s locomotion during each trial.

The open-field arena is a widely used apparatus for assessing rodents’ locomotion, exploratory behavior, and anxiety. The hole board apparatus is also used to assess exploratory behaviors in rodents but also assesses working and reference memory. The activity system combines both apparatuses and includes software for analyzing and measuring rodents’ behavior, which helps save time from manual observation and analysis. The holes in the activity system floor also include sensors to record which hole the subject pokes its nose, and the duration of the nose pokes.

The activity system can effectively be used as an in vivo locomotion assay for various experiments. It can be used to assess the effect of age on locomotion behavior, neuromuscular abnormality of genetically modified animals, anxiety-related behaviors on behavioral activity levels, neurodegenerative diseases on working and reference memory, and the effect of therapeutic interventions on locomotion and behavior.

It also includes software to measure and record the animal’s location and make a visual drawing of the activity data.

Installation of the software is simple and easy with standard download and installation steps.

The Activity box can easily be connected to your computer using a standard USB cable. Connection occurs once your PC has recognised the apparatus.

The user interface is easy to use with configurable parameters.

Maze Engineers support and troubleshooting is provided throughout your experiment and set-up.

Analysis of Locomotor Activity in Rodents

Zhang, Li, and Han (2020) analyzed the locomotor activity of mice using an activity system. The system comprised an open field, a webcam, and a computer with software. The distance traveled, velocity, and thigmotaxis of the animals were readily obtained using the apparatus.

Aragão et al. (2011) analyzed locomotor activity in rodents using an automated activity system. The system consisted of an open field with 30 cm high walls. It utilized digital images captured under infrared red of freely moving rodents to measure their activity. Moreover, videos of the rodents were analyzed using the software. Fifteen male Wistar rats were used in the study. The distance traveled, average speed, average potency, time spent immobile, number of stops, and length of stay in the area of the subjects within the apparatus were recorded. The animals were evaluated on multiple postnatal days to investigate the study’s reproducibility. The results indicated that all parameters were effectively measured using the system. Moreover, development changes in the patterns of movement in the subjects were also observed across postnatal days.