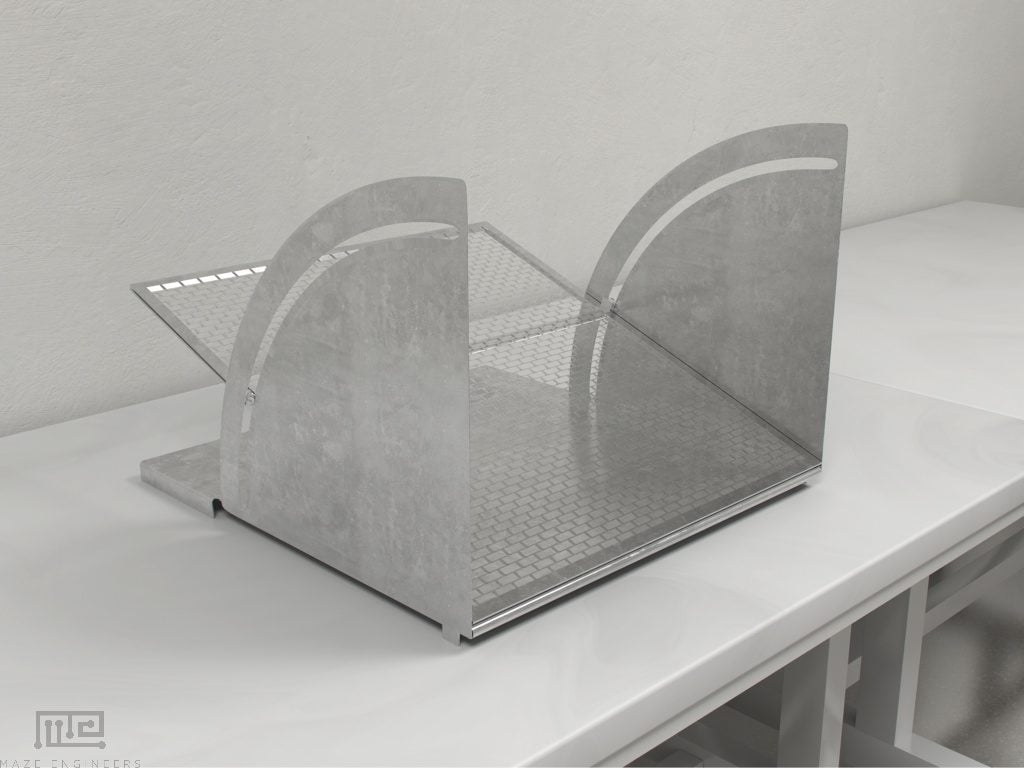 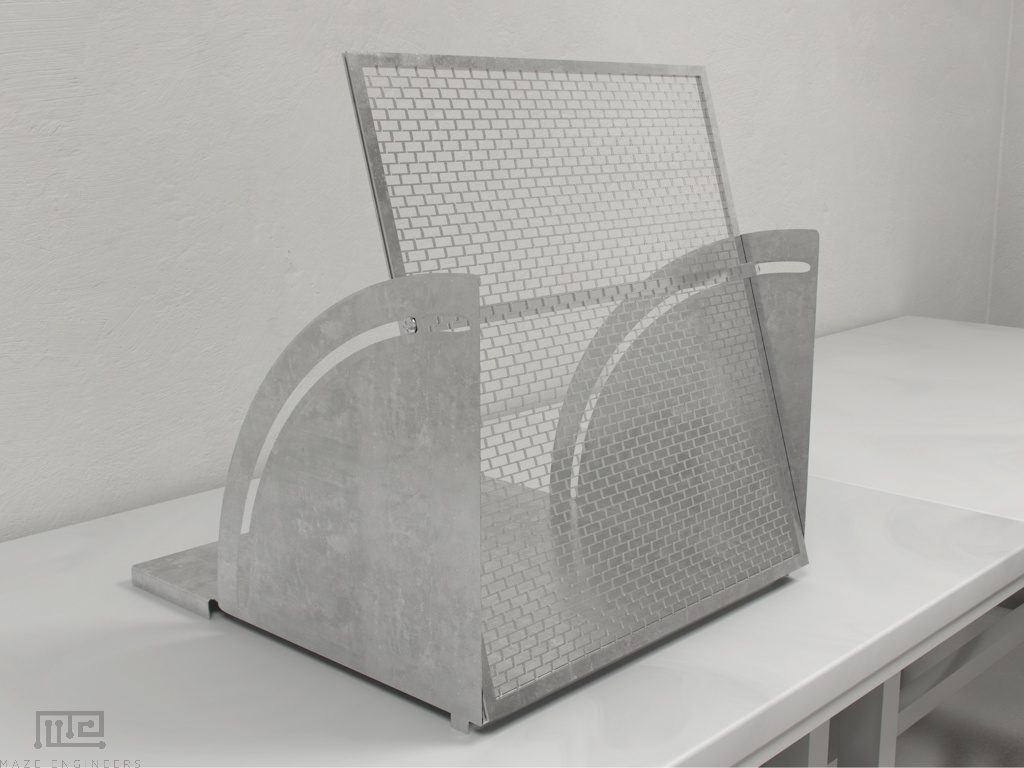 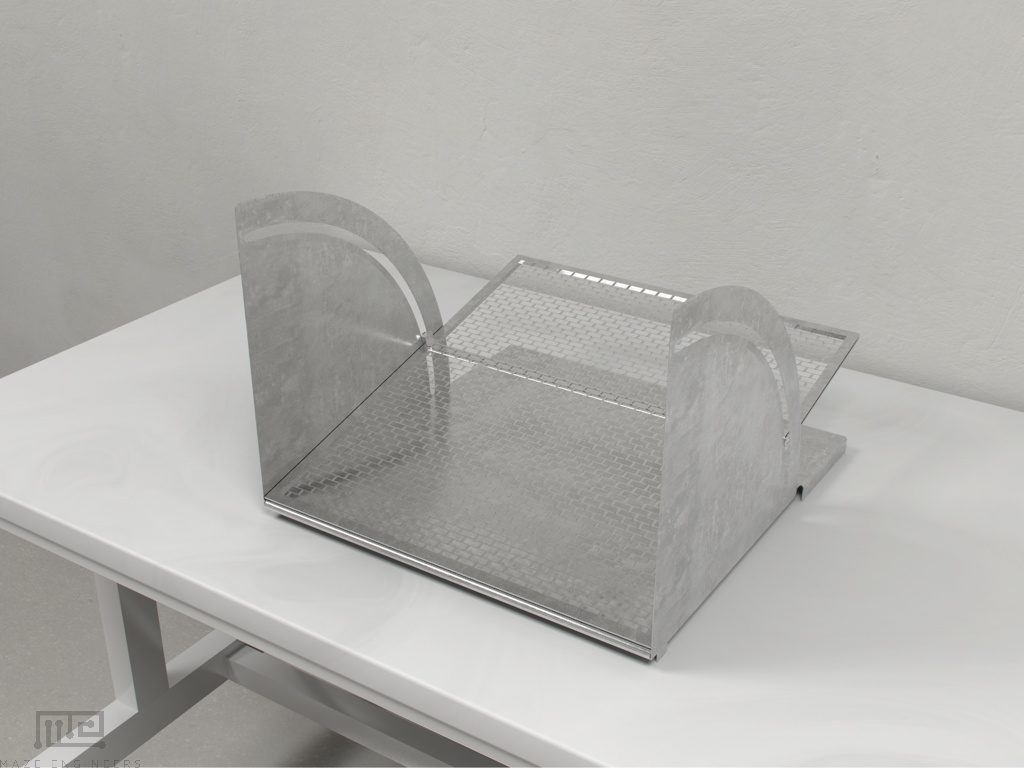 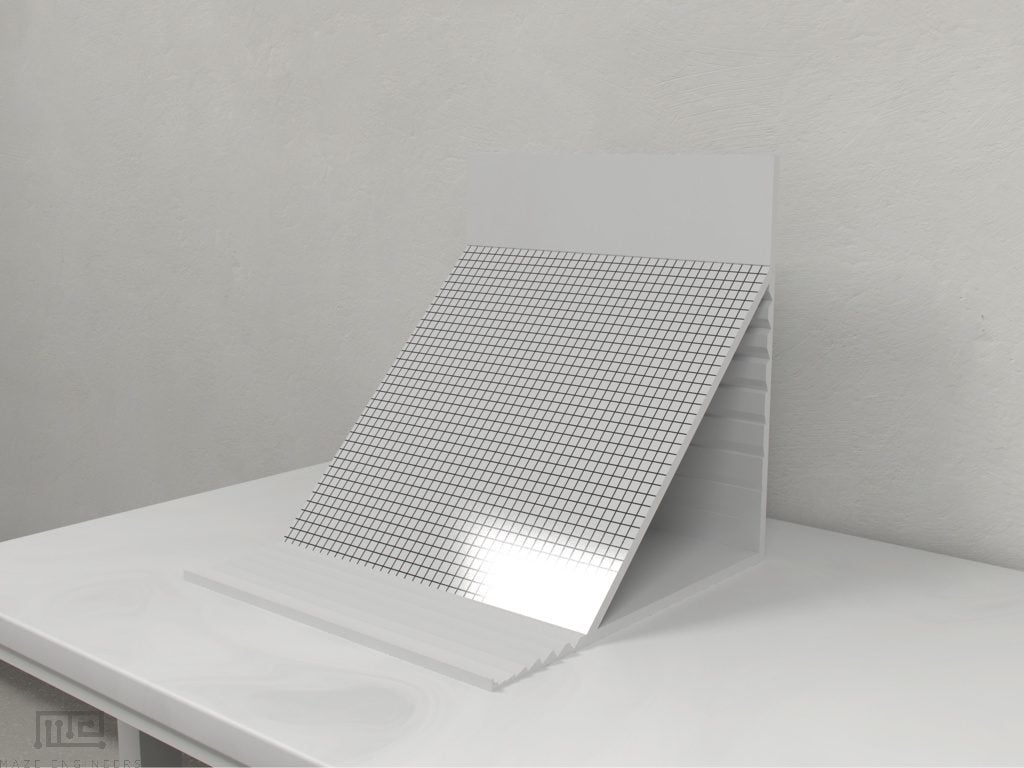 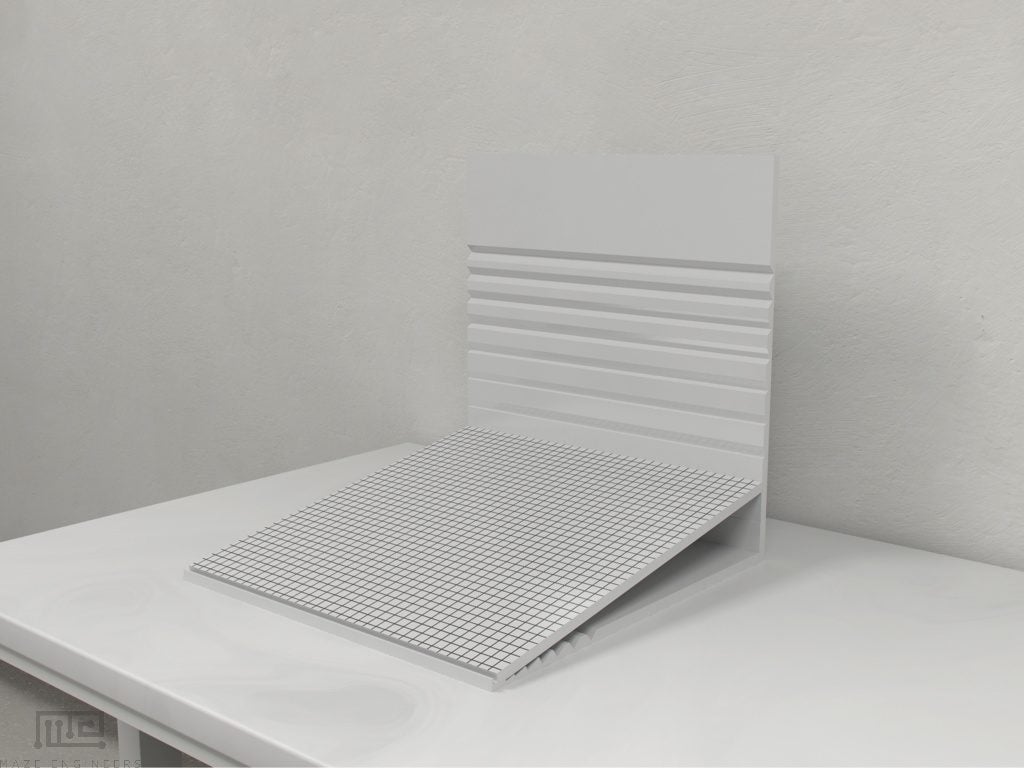 The geotaxis test is used to investigate motor coordination and vestibular sensitivity in rodents. The rodent is usually placed in an inclined grid in the head downwards position. The grid allows for grip and allows for the rodent to reorient itself towards an upwards position. Both acrylic and stainless steel versions are available through MazeEngineers. The larger angle creates a more difficult barrier towards reorientation. Shallower angles allow for easer geotaxis.

Other apparatuses used in assessing rodent motor function include the Grip Strength test, the Balance Beam, the Parallel Bars, the Catalepsy Bar test, the Static Rods Test, the Gait Test,  the Parallel Rod test, and the Pole test.  See our activity range here.

The innate postural response of rodents to rotate 180° from the head-down position to the head-up position on an inclined plane is called negative geotactic movement. This response appears as early as the second week of life in the normal pups (Rodríguez-Fanjul J et al., 2017). The negative geotaxis task is believed as a gold standard test for the evaluation of reflex development (developmental milestone) in pups (Heyser, 2004), motor skills, vestibular labyrinth and cerebellar integrity (Altman and Sudarshan, 1975). The negative geotaxis test is currently employed in the novel research as a leading test to evaluate behavioral functions in animal models of brain injury (Fan et al., 2010), stroke and ischemia (Rodríguez-Fanjul J et al., 2017; Lubics et al., 2005).

By applying Geotaxis test to young rodents, assessment of their motor coordination and vestibular sensitivity is determined based on natural, unlearned reflexive responses. Understanding these reflexive responses enables identification of sensory receptors and tracing of different pathways from receptor to behavior. This behavior assaying plays an important role in applications such as toxicology, teratology and phenotype screening that require measurement of the functional status of subjects.

The test is usually performed under two scenarios; the first scenario includes the usage of mesh that allows the subject to hold onto the grid holes and the second involves using a smooth, high friction acrylic substrate to eliminate the influence of the grid holes on the behavior of the subject. In both the scenarios, the subjects are tested for their response to gravitational stimulus at varying inclinations of the angled platform (Kreider and Blumberg, 1999).

The basic construction of the Geotaxis test apparatus includes an inclinable platform on which the subject is placed to determine its intrinsic response to the incline. The apparatus is available in metal and acrylic designs.

The metal model is equipped with a metal mesh of 1cm x 1cm grids pivoted on a metal frame that allows lockable inclinations ranging from 0º to 90º. The platform measures 35cm x 35 cm.

The acrylic apparatus is built with grey non-reflective opaque acrylic. The dimensions of the acrylic model’s base, wall and angled-platform are 35 cm x 35 cm. Nine horizontal notches each on the base and wall platform permit 5º angle increments ranging from 5º to 45º. Etching of 1cm on the anterior portion of the angled-platform allows easy grip.

For Geotaxis testing, neonatal animals are used as they reliably express innate behaviors which are true reflexive responses. The subjects aged between 12 to 14 days are maintained in a 12:12-hour light-dark schedule.

Before every trial, the apparatus is cleaned with ethyl alcohol to remove any odor trails to ensure the behavior of the subjects is not influenced. The subject is chosen at random and gently held at the start position for 5 seconds before being released on the inclined plane. Each test lasts for at least 30 seconds, or until the subject touches the side or base platform, or falls off the apparatus. The tests are recorded with the aid of an automated video tracker such as Noldus Ethovision XT.

Data is scored based on the orientation of the subject, the percentage of time spent orienting, and the time spent to rotate from a head-down to head-up position. The orientation of each subject is determined by comparing its longitudinal body axis to a clock face that is divided into 12 parts. The quadrant of the clock face is denominated by the four possible orientations; up (11 to 1 o’clock), right (2 to 4 o’clock), down (5 to 7 o’clock) and left (8 to 10 o’clock).

Determination of Geotaxis on the wire mesh and acrylic model

The subjects are placed in one of the four start positions– head-up, head-down, facing left, facing right– at an inclination of either 30º or 45º. The grid holes allow the subject to cling onto the mesh while they orient themselves.

Unlike in the mesh model, the subjects do not have any grids to cling on to on a smooth substrate platform. The use of substrate model eliminates the influence of grids on the behavioral response of the subject. The tests are performed at inclinations of either 30º, 35º, 40º or 45º at one of the start positions– head-up or head-down.

The longitudinal body axis of the subject is compared to the clock-face divided into quadrants to determine its orientation. The data is then scored for the orientation of the subject for every second of the experiment.

Percentage of time is calculated for every orientation position assumed by the subject under different start positions.

The Geotaxis test is a simple and inexpensive way of determining the geotactic behavior of subjects at varying levels of inclination. The capability of the model to determine the instinctive behavior of the subjects allows advancements in the field of behavioral teratology to assess the damage of toxins or chemical agents in developing animals. The model also serves as a way to provide useful quantitative measures of integrative, locally adaptive behavioral responses.

Training of young subjects can pose a challenge and affect the timely development assessment. Young subjects also tend to have limited sensory and motor capabilities and are often fragile and prone to fatigue. Their immaturity may also lead to inconsistent responses to standard challenges such as water or food deprivation. It is also important to take into consideration the influence of the substrate used in the behavioral response of the subjects.