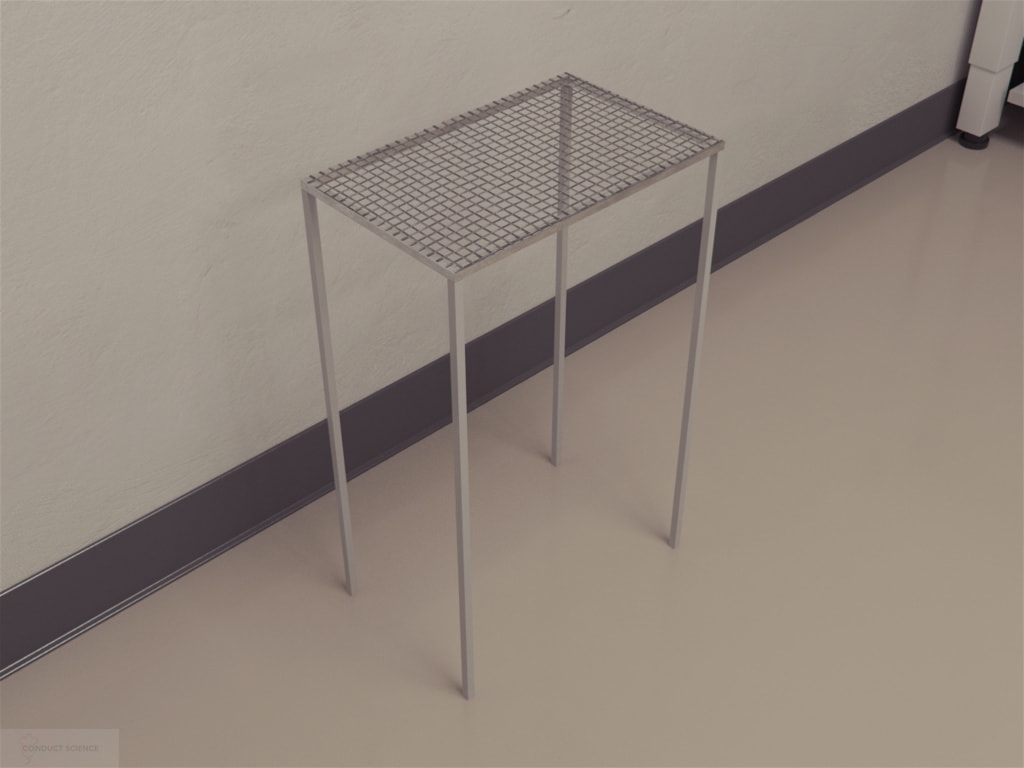 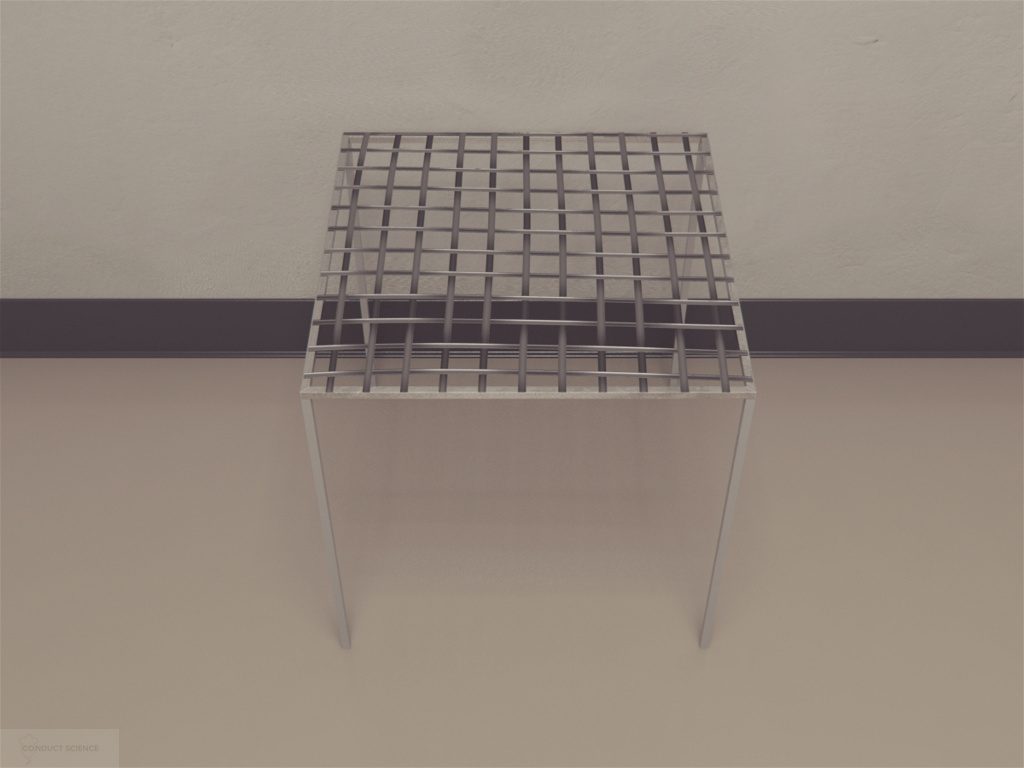 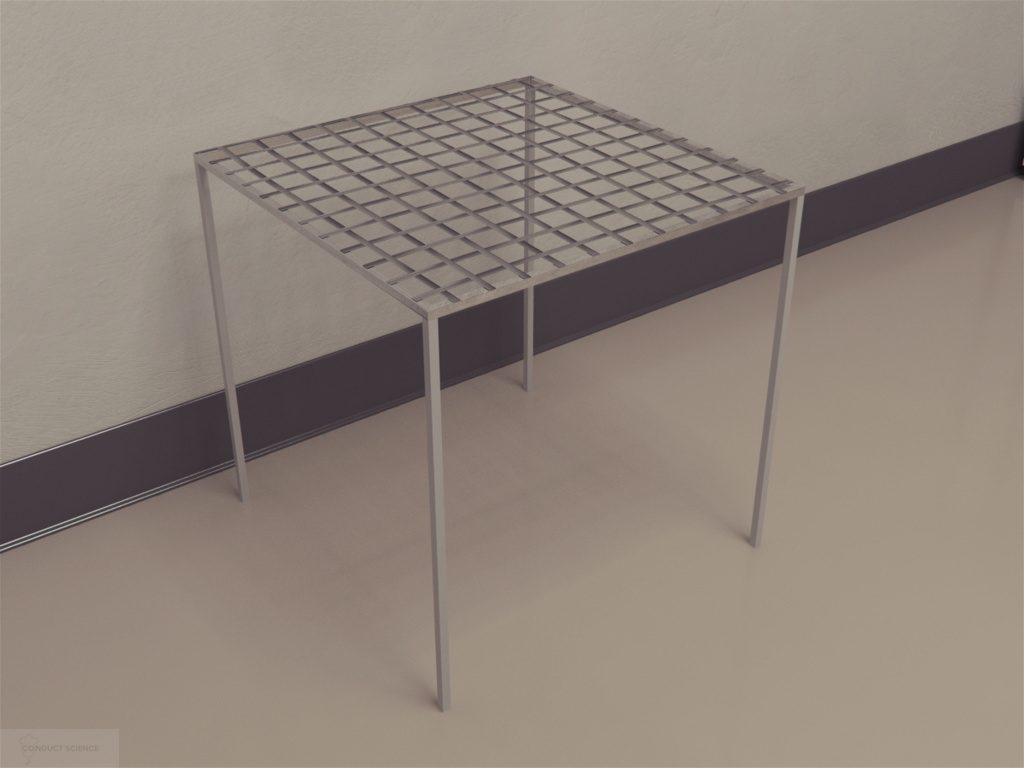 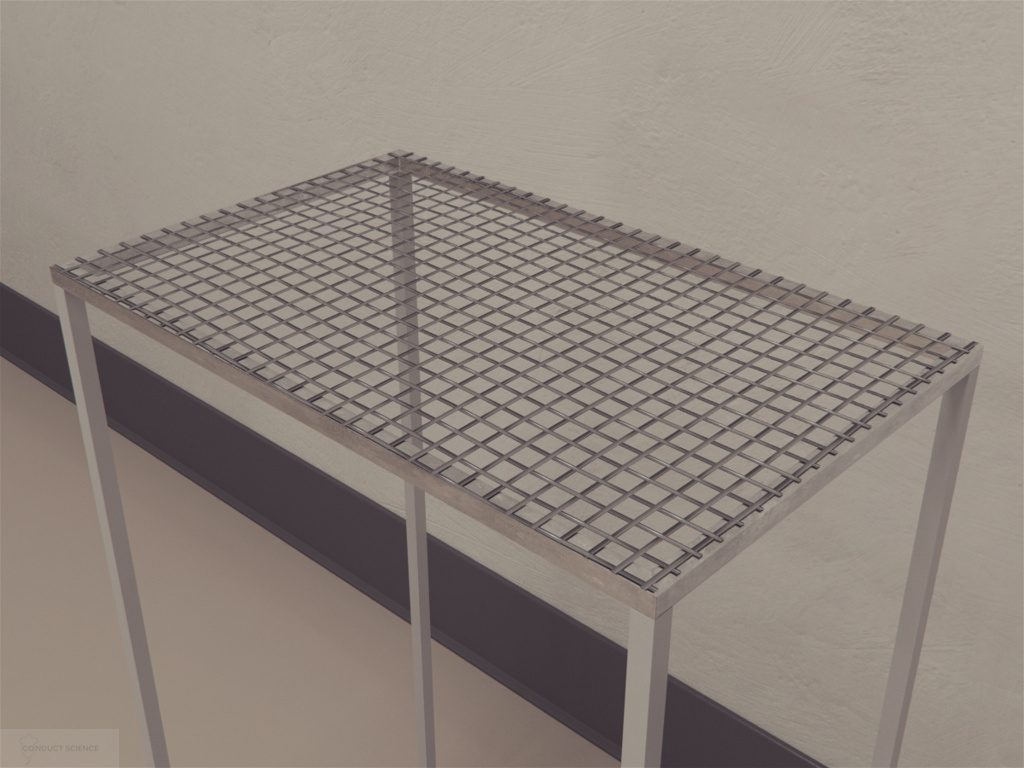 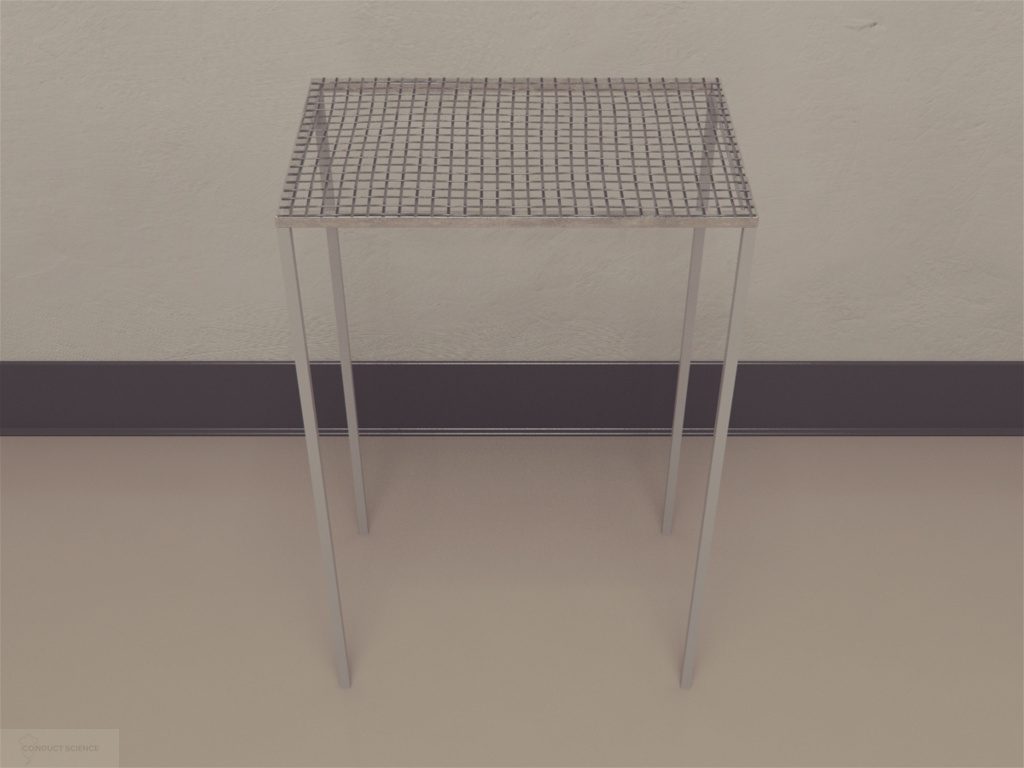 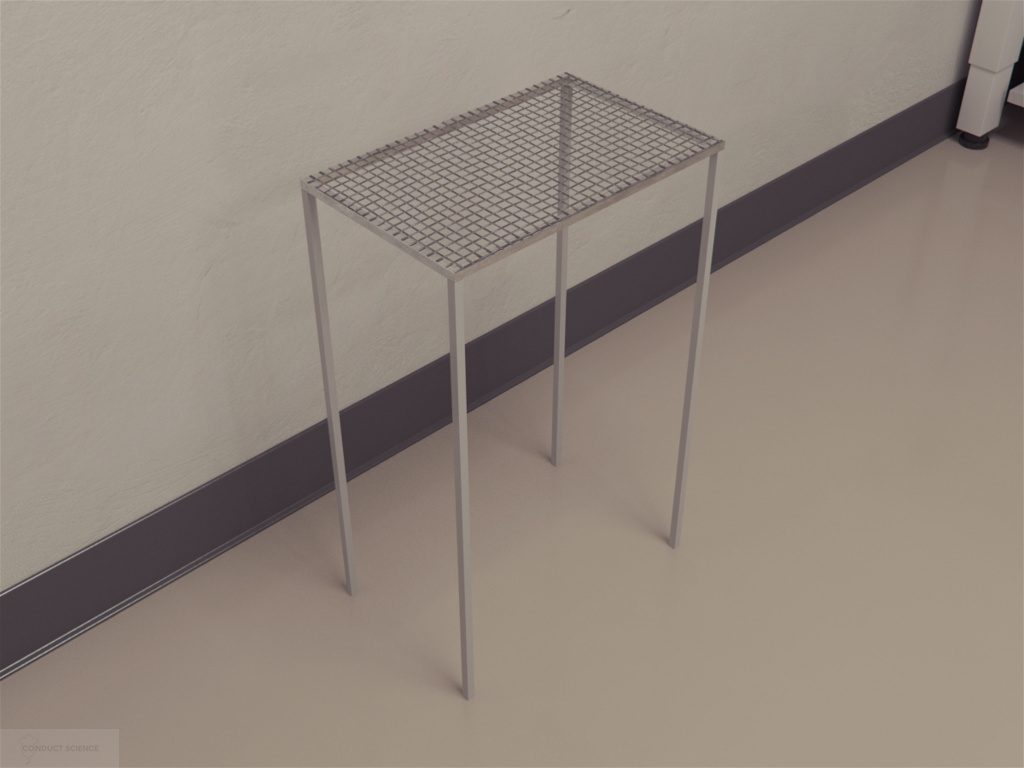 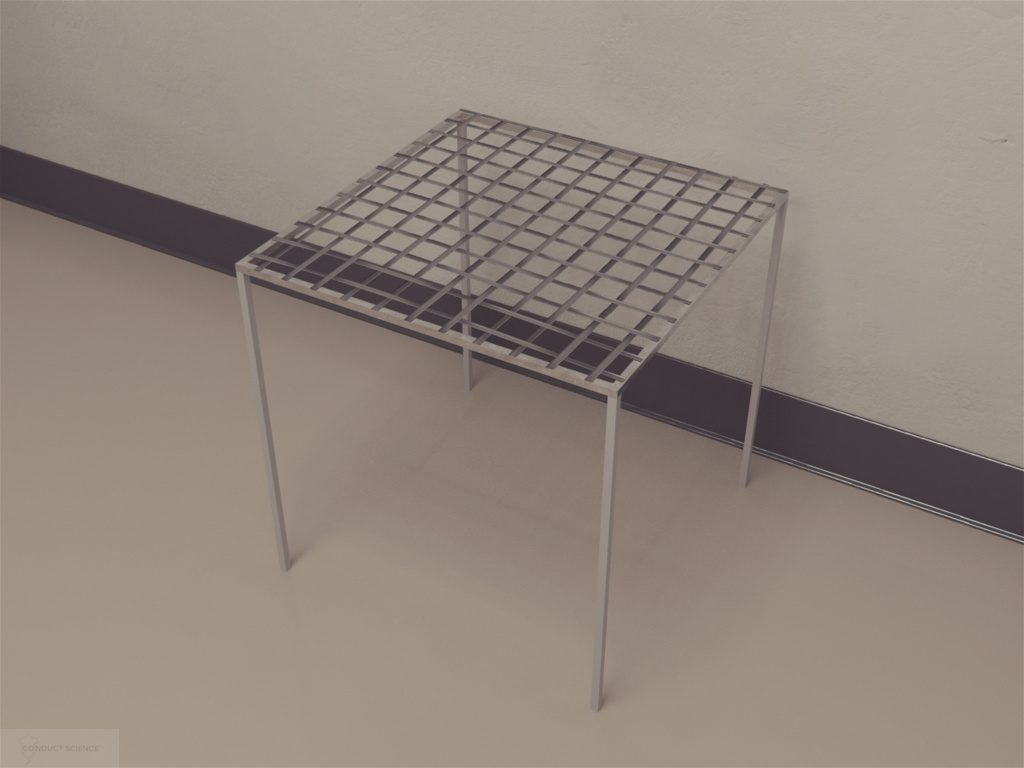 The grid test is a simple, widely used, and inexpensive test that measures long-term behavioral deficits in mice, especially in the parkinsonian literature. Multiple variants have been described, and modifications are available to ensure video grading compliance. MazeEngineers offers the regular grid test with two variations, a vertical grid test variant, and a horizontal grid test variant. 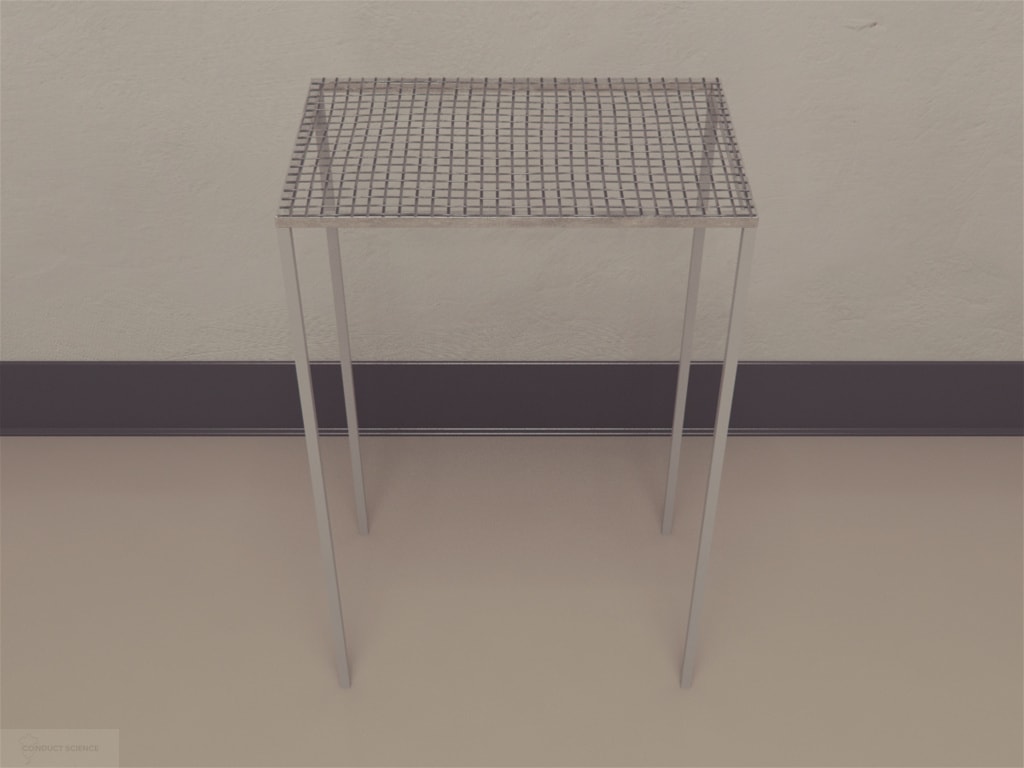 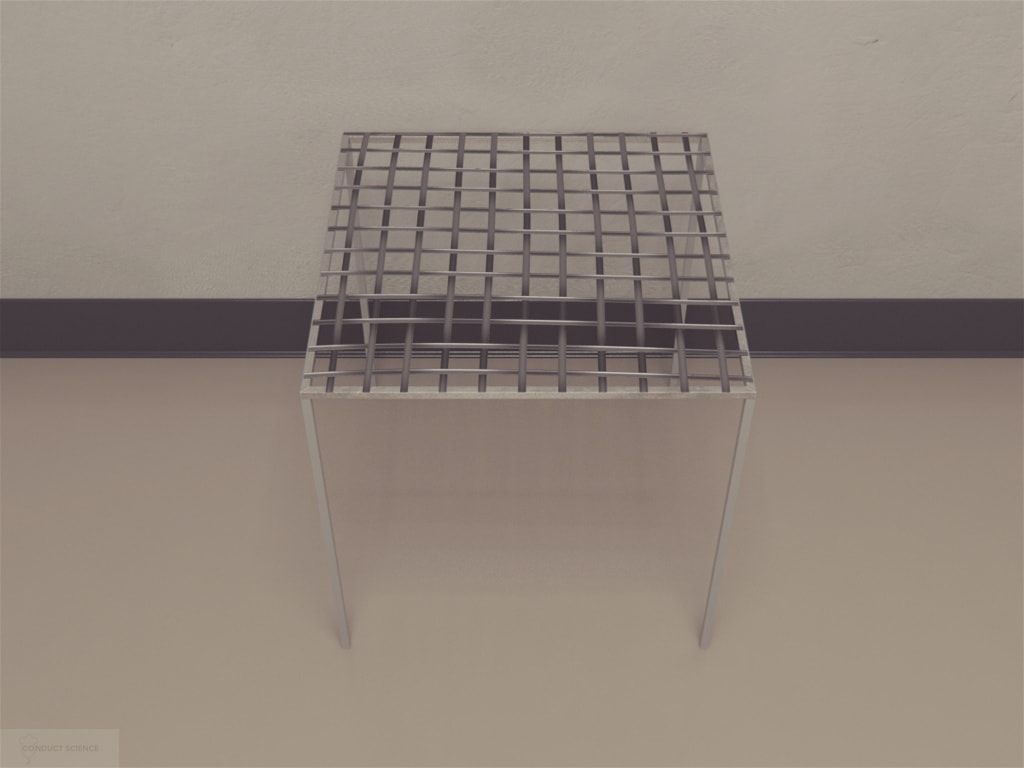 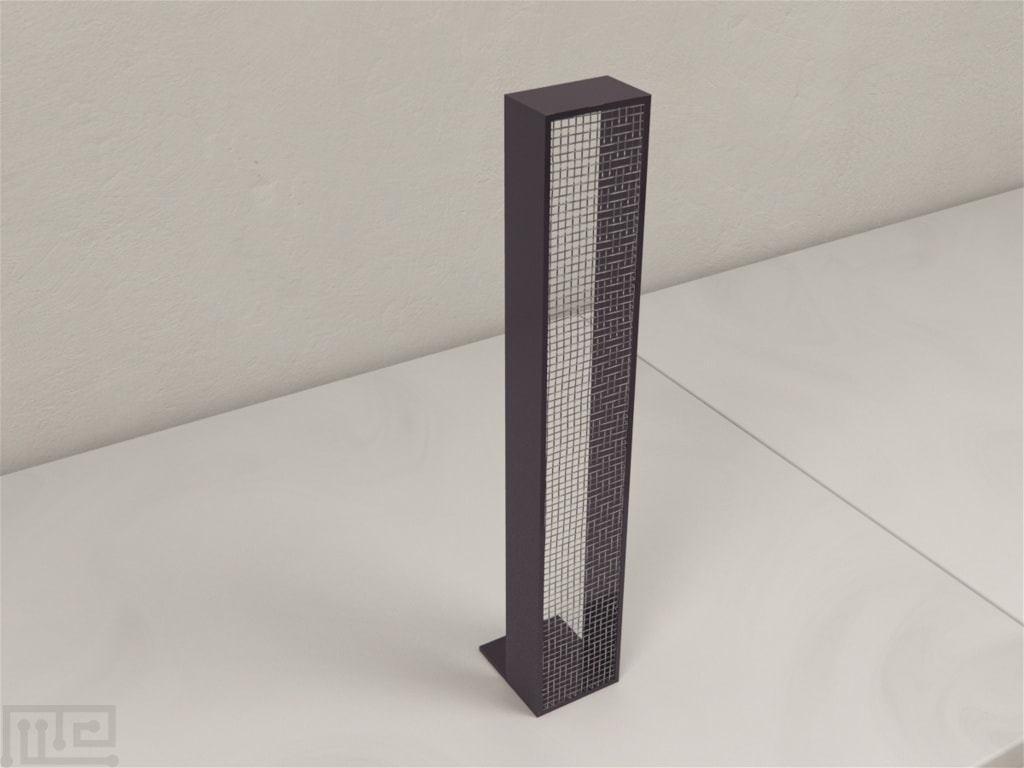 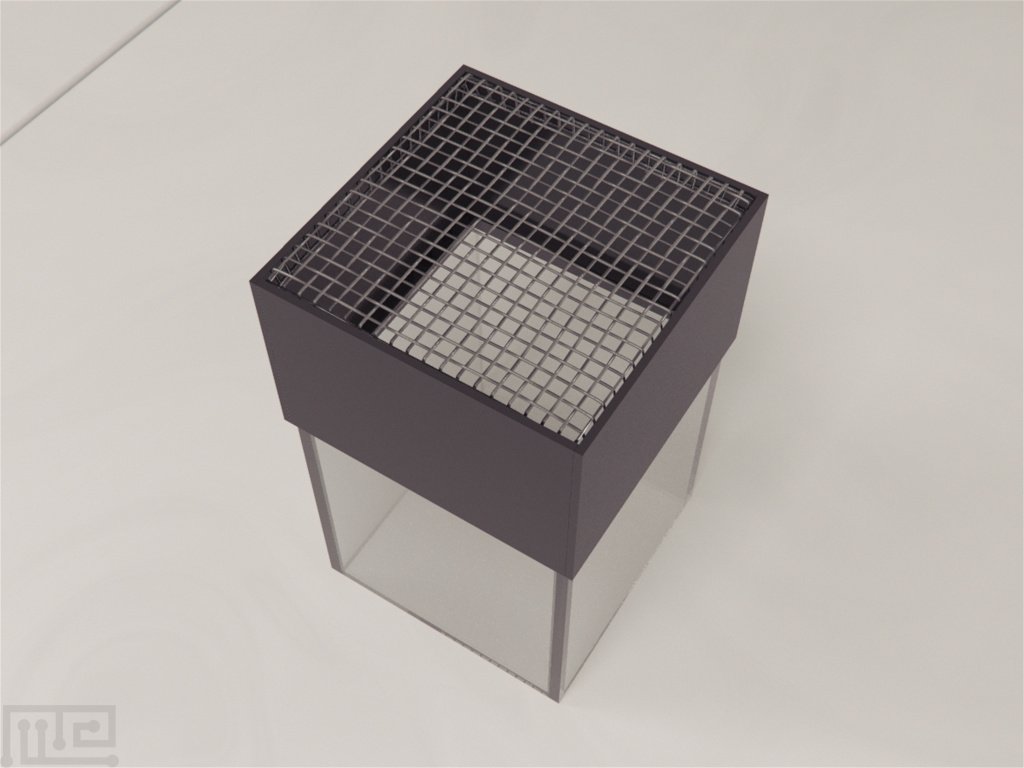 The Grid test is used in the evaluation of neuromuscular strength and coordination in rodents. The test is often used along with other tests such as the Rotarod and Gait test. The earliest use of the Grid test was by Tillerson et al., 2002 to study motor deficits in the murine model of Parkinson disease. The original apparatus was modified by Kim et al., 2010 to replace the rods of the original apparatus with clear plexiglass to allow easy scoring of data. The Grid test has two different variations; the Vertical Grid test and the Horizontal Grid test. These two variants use fixed angles of 90-degree parallel to the surface, grid mesh positions, respectively.

The Grid test allows the demonstration of muscular strength, by testing the ability of the rodents to hang on the inverted mesh, and motor coordination skills, by observing its locomotion in the inverted position. Motor deficits are one the behavioral symptom of Parkinson disease. The Grid test allows observation of subtle behavioral dysfunctions in rodent models of Parkinson disease.

The Horizontal Grid apparatus (Tillerson et al., 2002; Tillerson and Miller, 2003) consists of a 12 x 12 cm mesh grid having 0.5 x 0.5 cm grid openings. The mesh is raised 20 cm above the surface to discourage the subjects from jumping off the grid. Walls 3-inch high made of sturdy, opaque material (plexiglass) surround the grid in a manner that does not disturb the performance of the subject. A bar transects the width of the grid at the center and is attached to poles on either side that allow rotation of the grid.

The Grid test apparatus is cleaned before and after every experiment. The apparatus is well-lit. Automated tracking and recording software such as Noldus Ethovision XT can be used to assist with the scoring.

The task requires no pre-training. The general procedure involves lifting the rodent by its tail and placing it at the center of the grid. The tail is released when the rodent has gripped the mesh successfully with all four paws. The mesh grid is then inverted. The subject is observed for 30 seconds as it hangs from the grid. Trials are repeated as necessary.

The subjects were administered L-DOPA post 28 days of either 7.5 or 15 mg/kg MPTP injection, and their performance was evaluated on the Horizontal Grid test. A significant improvement on step distance scores for both MPTP dosages was observed in comparison to the pre-L-DOPA scores. Further, a significant decrease in percentage wall time was also observed on treatment with L-DOPA. (Tillerson and Miller, 2003)

The subjects were administered either 7.5 or 15 mg/kg MPTP injections and their behavioral performance was evaluated on the Grid test. A sustained decline in step length of the MPTP subjects was observed over the course of 30 days. In comparison to the controls, the MPTP treated subjects showed an overall increase of percentage wall time and an increase in forepaw faults on the grid (Tillerson and Miller, 2003).

The following data can be collected during the Horizontal Grid test.

The following sample graphs show the comparison of Grid Test measures of subjects treated with different doses of MPTP before and after administration of L-DOPA, 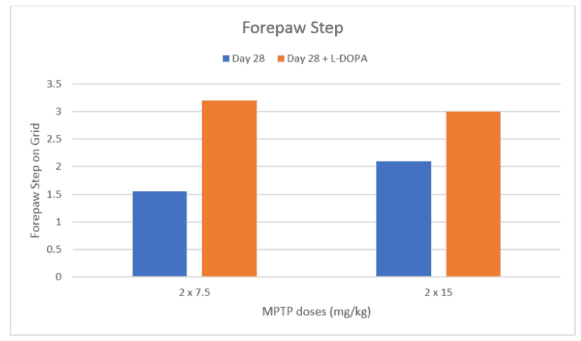 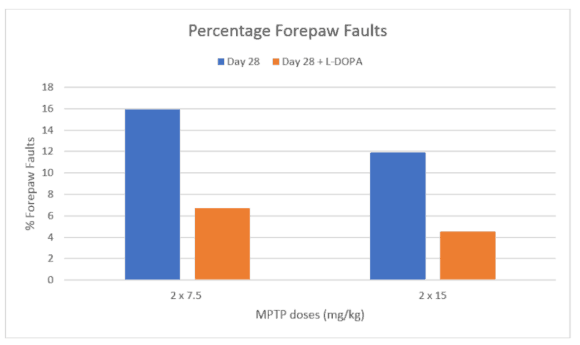 The following sample graph shows the variation of Percentage Contact Wall score across the test days. 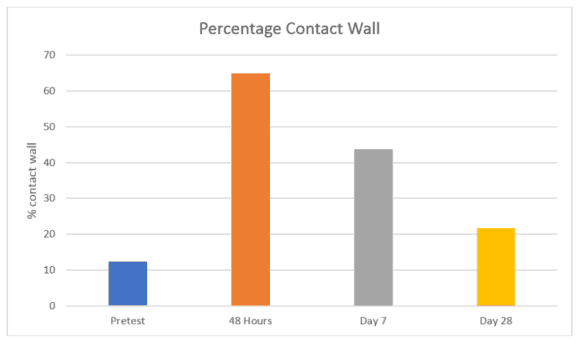 The sample graph below shows the Percentage of the Successful Hangtest score of two groups treated with two different dosages of MPTP and saline-treated subjects. 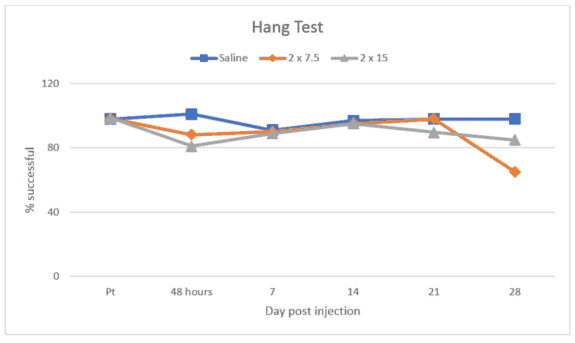 The Grid test is ideal for the assessment of neuromuscular strength and motor coordination in rodent models of Parkinson disease. The test can also be used in assessing motor behavioral performances of other rodent models. The Grid Test allows a wider range of inclination as compared to Vertical Grid Test and Horizontal Grid Test. The Grid test is beneficial in demonstrating muscular dysfunction and in evaluating drug effects. The test can also be extended to age-related neuromuscular decline to probe nerve regeneration/damage.

Repeated trials on the Grid test will result in muscle fatigue in the subjects. The subject’s performance is also dependent on its weight. Thus, it is important to have a large cohort of similar weights to obtain reliable results. It is important to allow rest periods between each trial. Factors such as the age and sex can also affect the performance. The transecting rod across the grid may cause difficulty in motor deficit scoring.