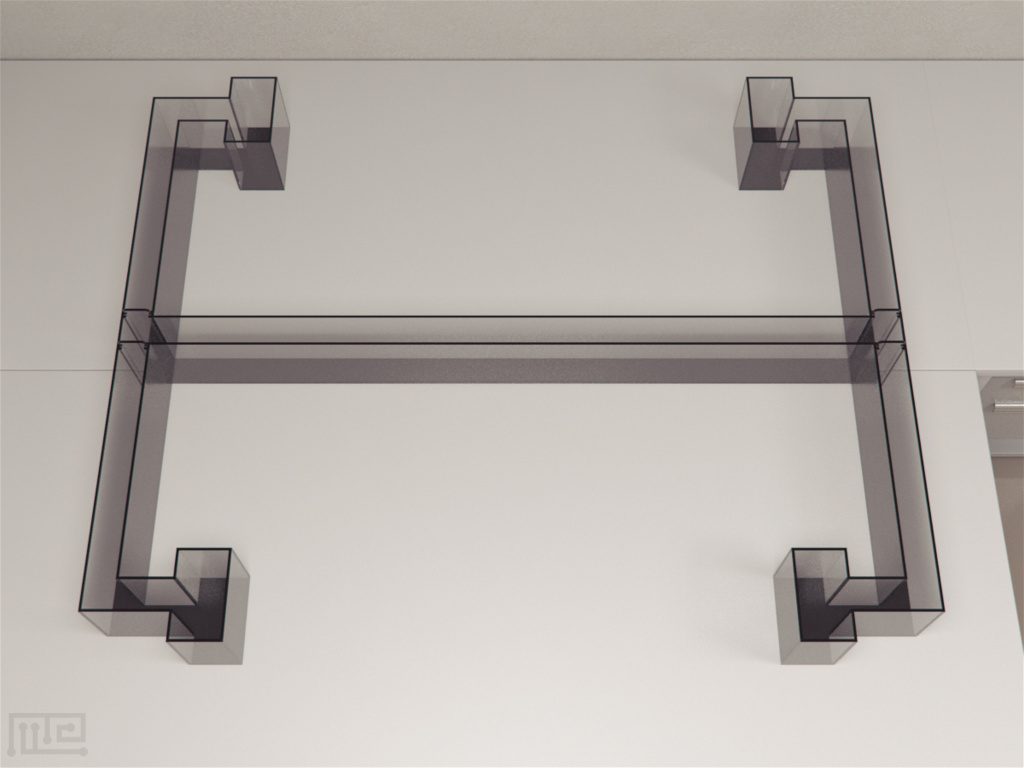 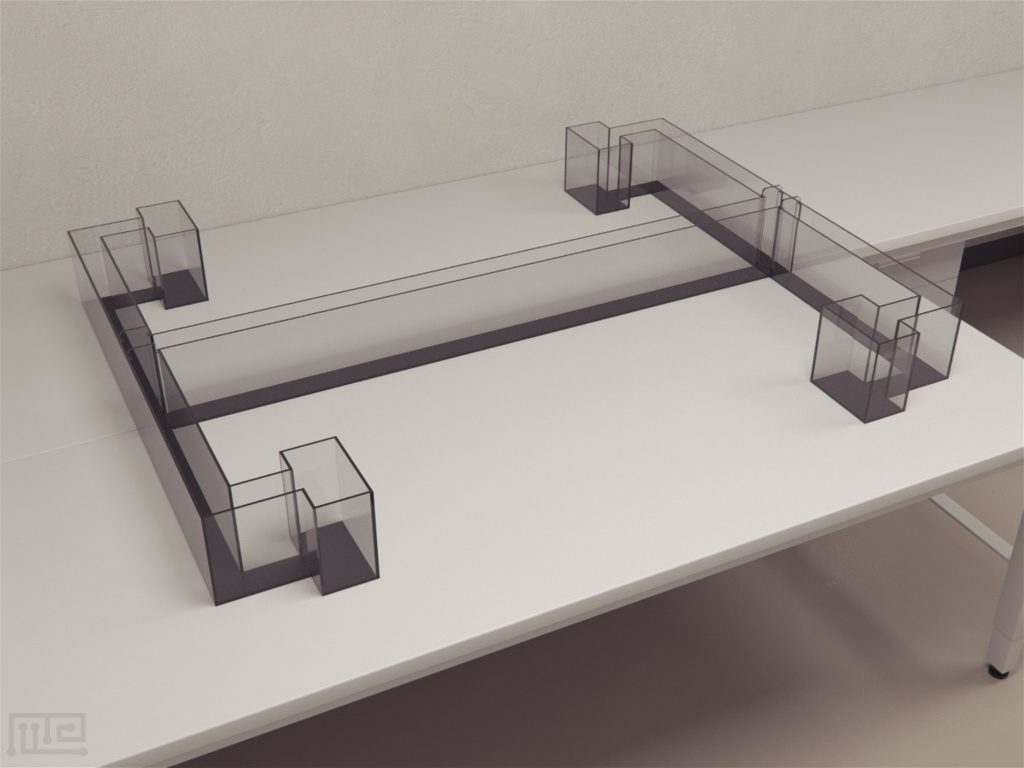 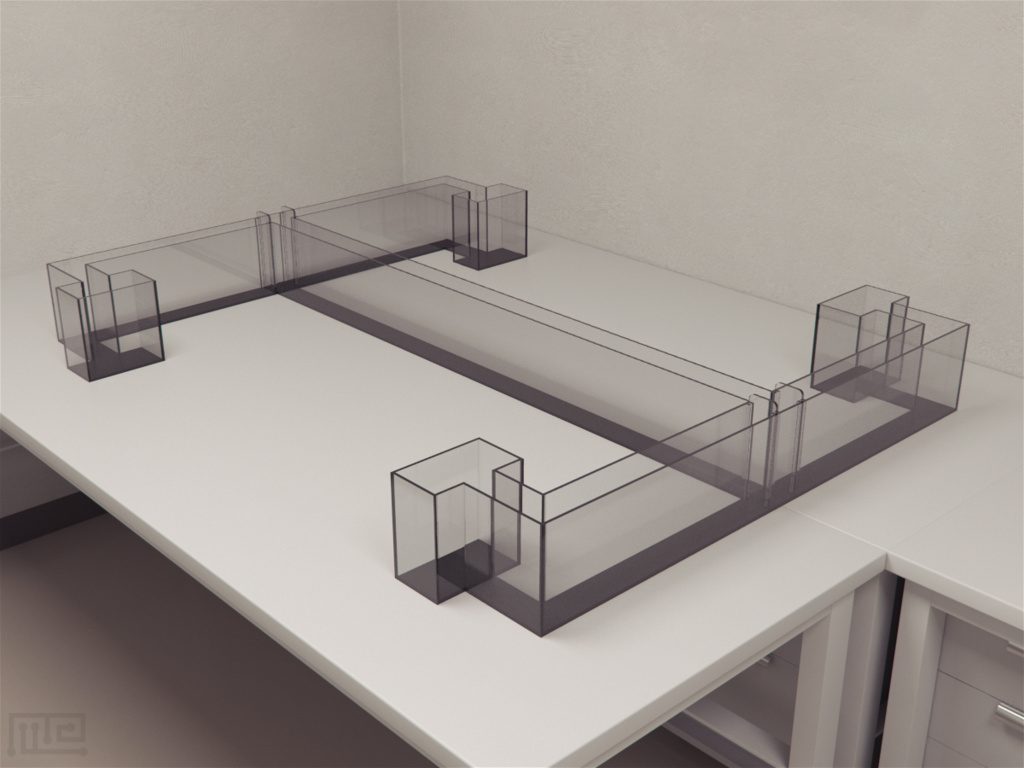 The H Maze is a track consisting of two T-mazes placed end-to-end to form an ‘H’ shape. Each end of an H has a reward chamber.  The initial use in the literature of the  H maze was in the study of hippocampal theta rhythms as a spatial navigation task. 4 guillotine doors are included in the order. Sizing available for mice and rats. Multiple colors and variants available.

The Olfactory H-Maze is a novel apparatus developed by Del’Guidice and team (2009) to evaluate spatial learning, memory, and cognitive flexibility. The Olfactory H-maze evaluates the performances of the subjects using a delayed reaction paradigm. The delayed reaction paradigm allows investigation of the brain functions involved in learning and memory. In the Olfactory H-Maze, the testing paradigm consists of three learning rules, delayed alternation, non-alternation, and reversal tasks, applied consecutively to assess the cognitive functions of the subjects.

Cognitive dysfunctions, such as learning deficits and poor cognitive flexibility, often accompany neuropsychiatric disorders, such as ADHD, and neurodegenerative illnesses, such as Alzheimer’s disease. Similar cognitive deficits can also be observed in brain lesion models. Deficits in cognitive functions result in the inability to infer the applied rules in the Olfactory H-Maze and apply them to obtain the reward. Apart from investigating disease models and injury models, the maze can be used to evaluate the effects of pharmacological manipulations and other treatments on cognitive functions.

The Olfactory H-Maze is a capital ‘H’ shaped maze. The maze consists of two testing chambers that are attached perpendicularly to straight tubes on either end via cubes. Each end of the lateral tubes is equipped with ports for water, air, and odor. Other apparatuses also used in the evaluation of learning, memory and cognitive functions include the T-Maze, the Y-Maze, the Barnes Maze and the Morris Water Maze.

The apparatus is made of plastic and is shaped like a capital ‘H.’ There are 2 testing chambers that are linked by a tube which is 5 cm in diameter and 23 cm in length. The ends of the test chambers are connected to empty cubes (sides 6 cm) that are equipped with inverted fans to eliminate olfactory stimuli air from the outside extremities of the tubes. At the end of each of the testing tubes, there are water, air and odor ports. The size of the H-Maze is such that it allows for easy movement of mice, rodents and other primates. Photoelectric cells are located 5 cm from the end of the tubes. These cells help to detect the movement of animals inside the maze. The apparatus is usually kept at least 160 cm above the floor.

The Olfactory H-Maze is kept on a square table, at least 160 cm above the floor. Tests using this apparatus are done under an overhead light of constant intensity and regulated temperature. Neutral air is passed through the entire maze to eliminate pre-existing odor cues from hampering the performance of the test subjects. Clean the apparatus before use.

Place the animals one at a time in the H-Maze so that they can explore it for at least 10 minutes. On the first day, let them run around the maze without any constraints so that they become familiar with the maze. Once the animals are familiar with the maze, deprive them of water. On the next day, inject odor in one of the chambers and introduce the animal into the maze. When the animal successfully follows the odor to the correct chamber, reward it with water. Repeat process with the second chamber. Odor injection should be set to last for five minutes.

The next day, inject the odor randomly from one end of the testing chamber. Reward the rodent if it is able to follow the cue and reach the correct end. If the rodent enters the incorrect end, reward it only when it reaches the correct extremity. After this, inject odor at random from any of the other three ends of the testing chambers. This will ensure that the test subject will not move according to a pre-set pattern. This should also continue for 5 minutes.

Inject neutral air before injecting odor in the other testing chamber.

The task uses a fixed arm to reinforce with the reward. After the test subjects perform the Delayed Alteration Test successfully, inject the odor into the selected arm of the maze. For this trial, the rodent is expected to choose the same arm every time to reach the reward. Continue the process until the rodent achieves a pre-determined success criterion.

On completion of the Delayed Non-Alteration Test successfully, release the odor from the opposite arm to the one used in the previous test. This task essentially evaluates the subjects spatial working memory.

Del’Guidice et al. (2009) observed the effects of prefrontal lesions on the cognitive function of adult male Balb/C mice using the H-maze task. Subjects were divided into 3 treatment groups. Subjects underwent surgery and received unilateral lesion in the dmPFC (Fr Cx) or unilateral lesions in the somatosensory cortex (S Cx). The remaining underwent sham surgery (SHAM) and served as controls. It was observed that the SHAM and S Cx mice performed the delayed alteration task better than the Fr Cx group of mice. In the delayed non-alteration task, the results were similar. The S Cx mice reached the reverse task criterion at the fastest pace, whereas the Fr Cx took the longest and many mice were not able to complete the tasks. The lesions resulted in lower memory retention and a reduced ability to learn new things as evident from the difficulty in following an already learned rule by the lesion group.

The following parameters can be observed using the olfactory H-Maze:

The Olfactory H-Maze is an automated maze that reduces the margin of human error. The photocells can help record the progress of movements in real time. The ports allow for instantaneous changes in variables whenever needed. The tests are simple, not extremely time-consuming and easy to conduct.

The Olfactory H-Maze can be time-consuming given the time required for pretraining and fulfillment of the success criterion. Any visual, auditory and olfactory interferences can disrupt the experiment and lead to inaccurate results. The subjects’ own state can hamper the experiment and tamper with the results. If the subjects are overtrained, it can lead to misleading results.