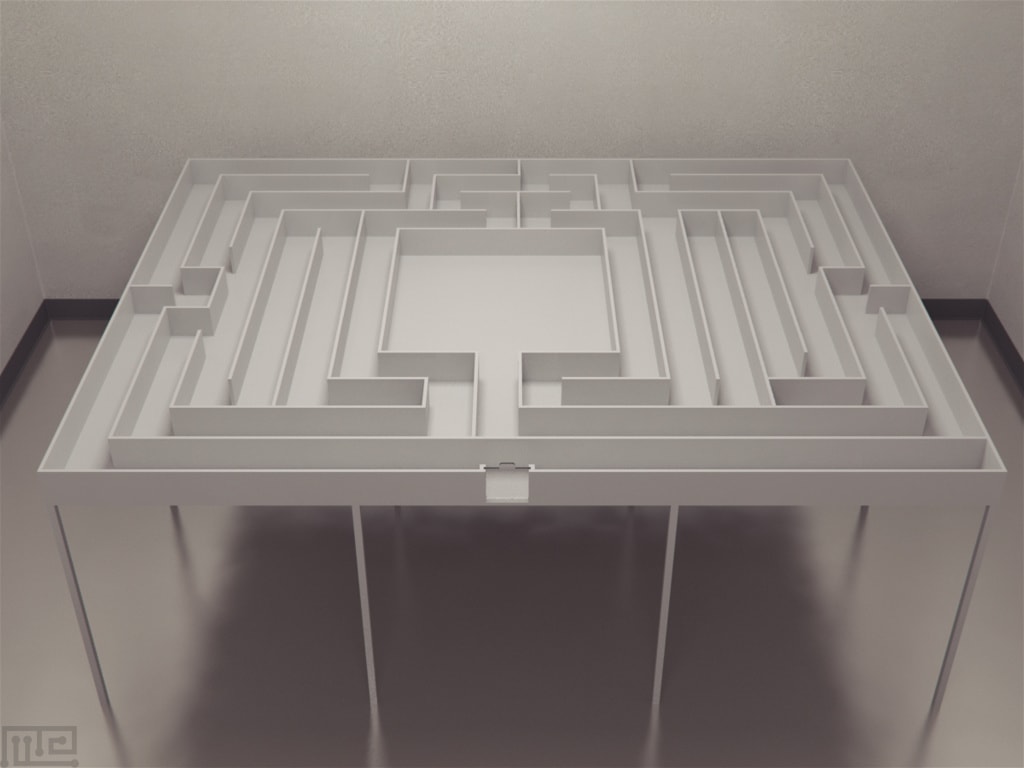 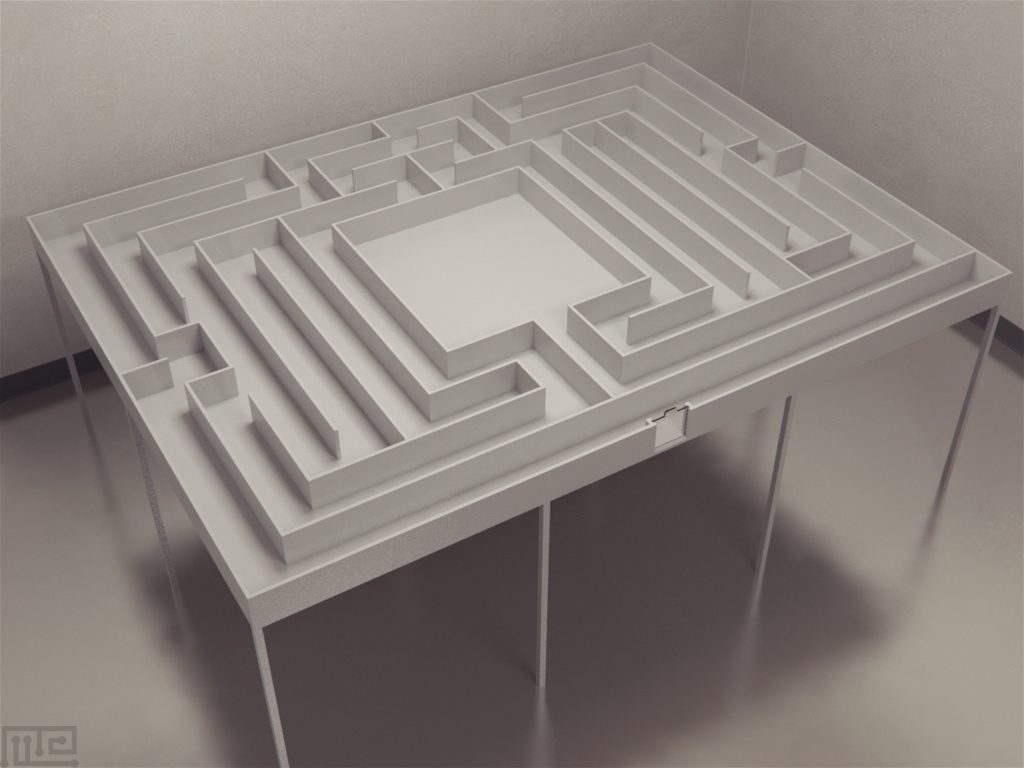 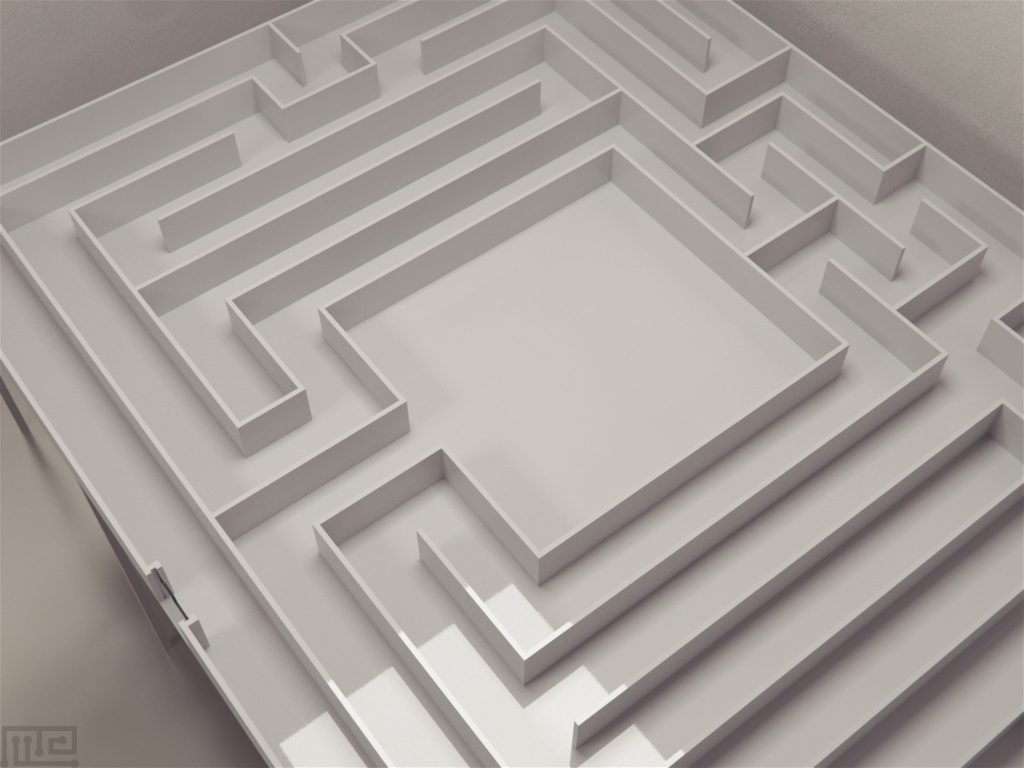 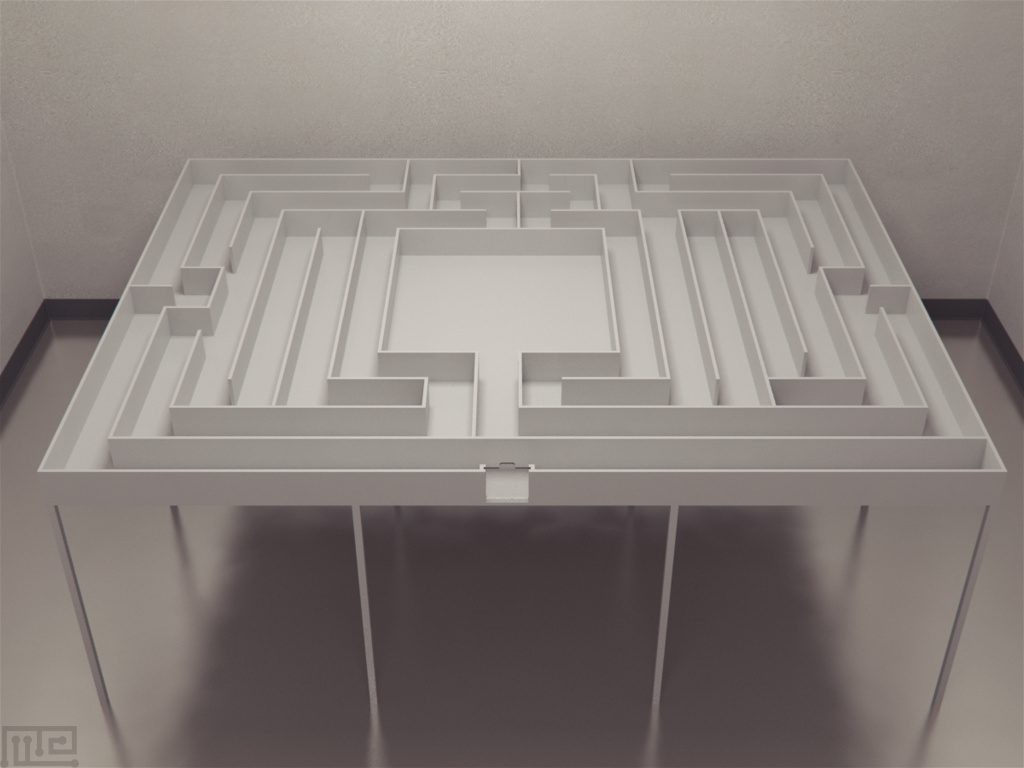 The dimensions are 6 feet x 8 feet constructed of modern acrylic (the classical version was made of wood). All the rest: top, sides, and partitions between galleries were of wire netting. Wall height is 4 inches and alleyway width 4 inches.  In the center is a large open space. The original description by Dr. Small was the following: “The aim in these experiments, as indicated above, was to make observations upon the free expression of the animal’s mental processes.”

The simplest definition of the term “maze” is a web of paths and turns designed as a puzzle to be solved. Fittingly, the use of mazes in the history of behavioral research began with such a scheme, inspired by a real-life network of paths and hedges in the Hampton Court in England, a popular tourist site at the turn of the 20th century. Due to the observation that rats, by nature, lived in maze-like, underground tunnel systems (Small, 1901), the Hampton Court maze’s design made a huge impact in the study of comparative psychology, mainly in the learning behavior of rats. Scientists sought to examine how rats behave when faced with “real-life” learning tasks, such as their ability to learn how to navigate their way through new and unfamiliar maze tunnels. The Hampton Court maze (Small, 1901) as used in laboratory research is one of the first maze ever invented to observe, understand, and predict learning patterns in rodent behavior.

Though different mazes and maze styles have greatly evolved to study different aspects of rodent behavior using more sophisticated and detailed methods, the Hampton Court maze still remains a reliable tool in animal research. The simplicity of its design is straightforward, easily applicable, and clearly illustrates the widely studied automatic nature of rodent learning in any maze. 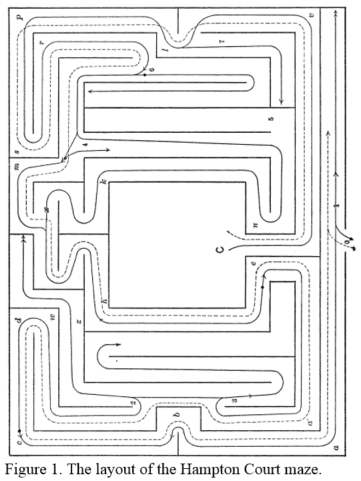 The Hampton Court maze is a rectangular apparatus of 6 by 8 feet in dimension, with acrylic boards for a base, and top, sides, and partitions made of wire netting designed to mimic the naturalistic feel of rodents’ tunnel environments. The maze walls are 4 inches in height, and the width of the passages are also 4 inches in width. At the center of the Hampton Court maze is a large, open space, and before the rodents can find their way to the center where the food reward is usually located, they run the risk of ending up in any of the 7 blind alleys. See figure 1 for the ground design of the Hampton Court maze.

At the start of trials, rodents are kept in a holding cage with a sliding door that opens to the entrance of the Hampton Court maze. Food is placed in the central enclosure as a reward for escape. The rodents are food deprived to motivate the exploration of the maze.

The Hampton Court maze makes use of simultaneous training and testing trials. For each of the recommended ten trial run, rodents are given a specific amount of time to explore and navigate the maze. The first trial is for training and exploration, and rodents are given 15 minutes to navigate the maze freely. For the next trials, rodents’ performance at each critical decision point, as well as their speed measured via the time it takes for them to reach the center, are all noted as a measure of spatial learning and behavior. The rodent’s performance is, therefore, measured based on these two variables, through an observed change in (1) speed and (2) error or hesitation at the maze’s critical points. Spatial learning may be tracked across trials with the use of a Noldus Ethovision XT.

The Hampton Court maze has been used to compare the nature of spatial learning and behavior across rodent species. In Small’s (1901) iconic pioneer study on animal behavior, the performance of wild rats on the Hampton Court maze was compared with those of domesticated white rats. Substantial qualitative evidence from that study suggested a number of differences, but ultimately proved the generality of automatic improvement in navigation across trials in both rodent species. The Hampton Court maze has also been successful in comparing the performance of normal versus blind rats, as an analysis of the role that the different senses play in rodent spatial learning and behavior. The apparatus continues to be a landmark invention today, offering many different applications through simple methodology.

The sample data is represented by plotting the mean percentage of time spent completing the maze by lesioned and non-lesioned rats, across the ten performance trials. As seen from the graph, the control group had a higher learning curve compared to the lesioned group. This relatively impaired performance suggests that lesioned rats faced greater difficulty learning the maze and solving each critical point. These results imply that lesions had a detrimental effect on the rats spatial learning or memory. 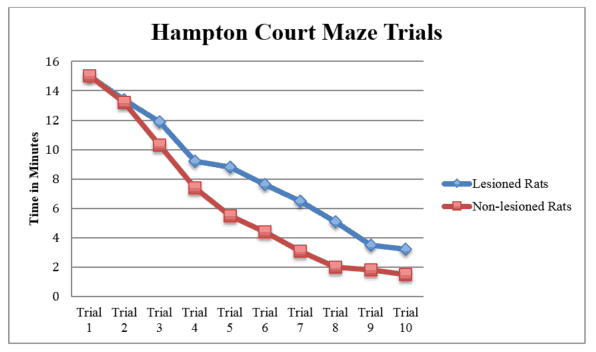 The key strength of the Hampton Court maze lies in the simplicity of its design. This apparatus has been around for more than a century, and as a classic laboratory apparatus for rodents, it effectively represents the straightforward concept that drives animal research and comparative psychology as a science–analyzing the determinants of behavior at a choice-point in a maze.  (Tolman, 1937 as cited by Goodwin, 2012).

Goodwin, C.J. (2012). A-mazing research: a look at the origins and continued use of the maze in psychological research. American Psychological Association. Retrieved from http://www.apa.org/