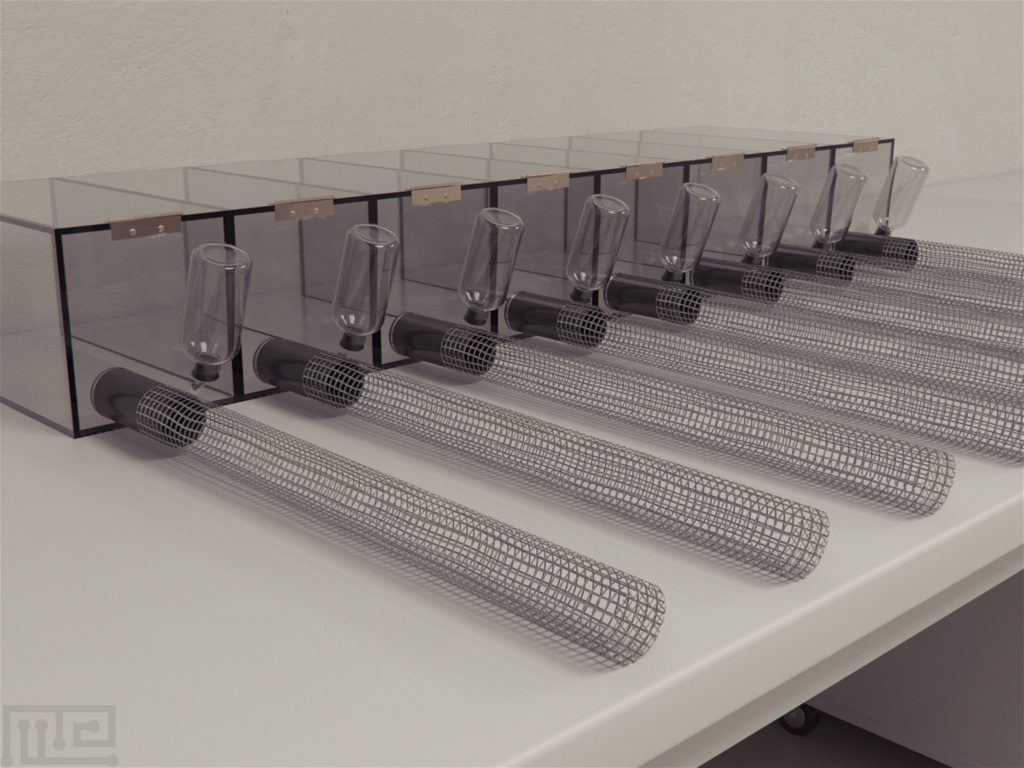 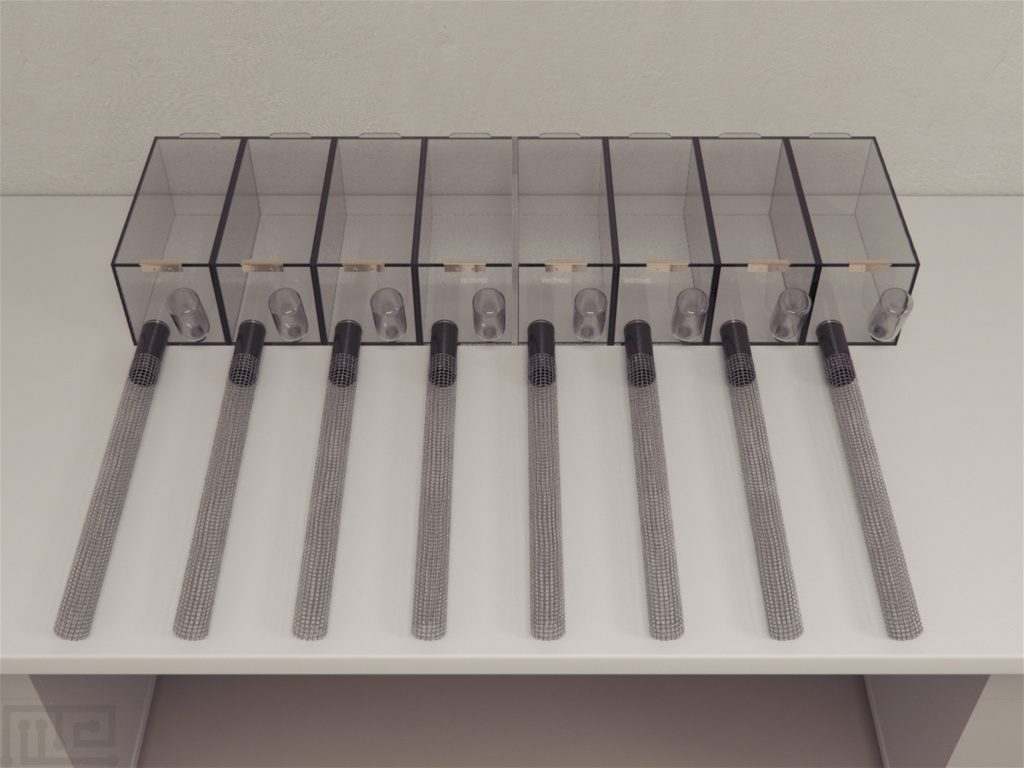 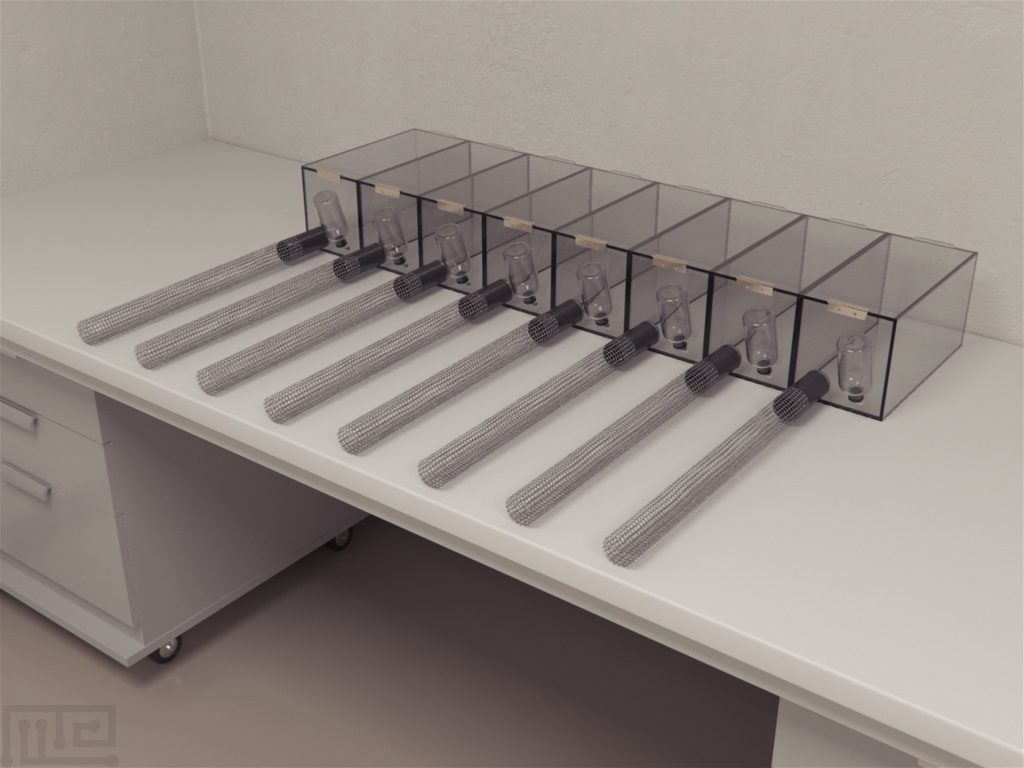 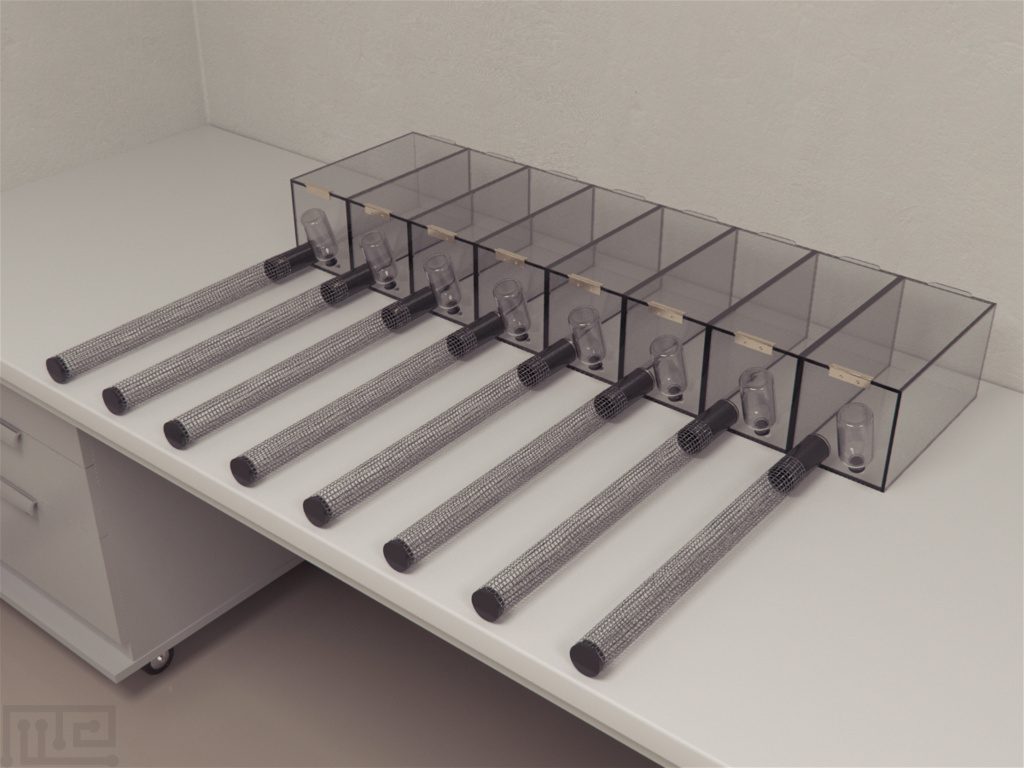 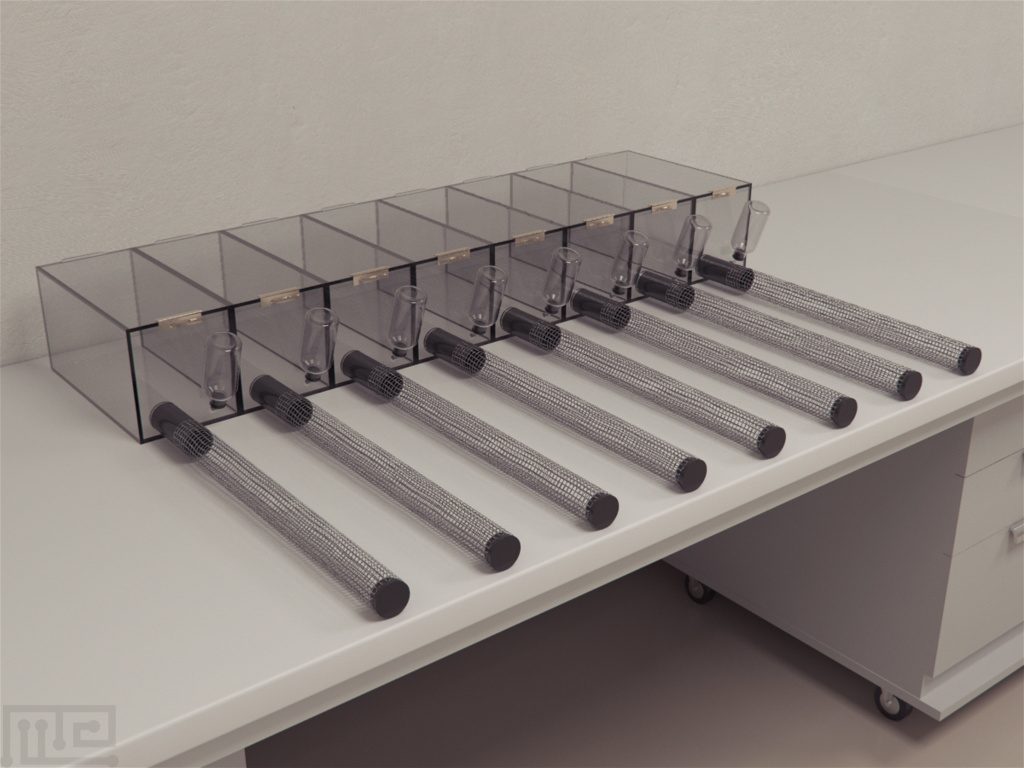 Hoarding behavior has been described in many places in the literature, however this variant reviewed by Deacon (2012) is the standard offered by MazeEngineers. It consists of 8 rows with a removable clear lid, with an acrylic tube connected to 8 separate wire mesh tubes with a removable end. Sizing for mice and rats. Multiple colors available.

Hoarding apparatus is used to study a species-typical behavior manifested by transferring the food to secure place for later consumption. In nature, animals either hide food underground like squirrels and birds or near home base in burrows like rodents. Hoarding behavior is considered useful for animals in situations like extreme weather changes or when hiding from predators. Hoarding food rather than consuming and storing it as fat is thought to be more energy efficient because fat storage can increase body mass, decrease ambulation and increase chances of predation. Factors like spoilage or theft of food can affect the hoarding behavior. (Keen-Rhinehart et al., 2010).

One Device
Request a Hoarding Apparatus

Craig et al., first described food hoarding while describing behaviors involved in eating, drinking, and reproduction. One of the behaviors described was ‘appetitive ingesting behavior’ which is a species-specific motivated behavior towards achieving a certain goal object. Food hoarding is one of the appetitive ingestive behaviors. Rats are not natural hoarders and only carry food from one place to another to consume it. In laboratory settings, however, rodents depict hoarding behavior when the access to food is restricted or completely stopped. Wolfe et al., conducted one of the first studies to show food hoarding, then described as food-storing behavior in laboratory rats and how this behavior is affected by habits and diet. Later on Morgan et al., stated a deficit hypothesis that animals show hoarding behavior when they reach a certain threshold of energy deficit. They tested this hypothesis by observing how food deprivation and satiation affects food hoarding in rats. Deacon ., described a simple and easy to use apparatus to assess hoarding in mice which is one of the standard protocols used at present to study hoarding in rodents.

The subjects are housed in groups of 3–5 in plastic cages with wood chip bedding in rooms with a 12-hour light-dark cycle. Before starting the test, clean the home chambers and hoarding tubes to remove the presence of any unwanted stimuli from influencing the performance. Transfer some of the soiled wood chip bedding from group cages into the home chamber and plug the proximal end of the hoarding tube.

Repeat the test multiple times for the subjects to become habituated. The test is then repeated as described above after administration of the treatment under study.

Evaluation of food-deprivation and hoarding in rats

Morgan et al., carried out first of its kind experiments with rats to observe the influence of food-deprivation and satiation on food hoarding behavior. Four different experiments were conducted with increasing hours of food deprivation. The observations made during the study showed that the rats when deprived of food for 24 hours with only 1 hour to eat, did not show any immediate hoarding behavior, but once the behavior was shown, the duration of food-deprivation did not affect the intensity of hoarding. There was a circadian rhythm to the hoarding behavior in rats. It was concluded that the aim was not to collect food pellets but instead to carry out the hoarding activity.

Herberg et al., applied electrical stimulation to lateral hypothalamus, specifically areas that stimulate feeding. It was observed that non-hungry rats showed intense hoarding behavior when electrically stimulated. This behavior is also shown by rats when they are deprived of food for longer time periods. The study suggests that hypothalamus is involved in producing hoarding behavior as a result of long-term nutritional deficiency.

Deacon et al., studied hoarding behavior in mice using a simple and easy to build apparatus. The study concluded that hoarding is a species-typical behavior which can be used to observe effects of brain lesions and different pharmacological treatments in multiple strains of genetically modified mice.

Deacon., continued their work with further developing a hoarding paradigm to characterize “activities of daily living” (ADL) in mice which can be used to understand the neurodegenerative diseases like Alzheimer’s disease (AD) further. The study used female C57BL/6 genetically modified mice that underwent stereotaxic surgery to produce hippocampal and prefrontal cortex lesions. It was observed that the mice with hippocampal lesions did not show hoarding behavior as compared to mice with prefrontal cortex lesions that had a very little effect on hoarding behavior.

The following data is collected from the experiment

The data obtained from the apparatus is mostly non-parametric.