A test for Exploration 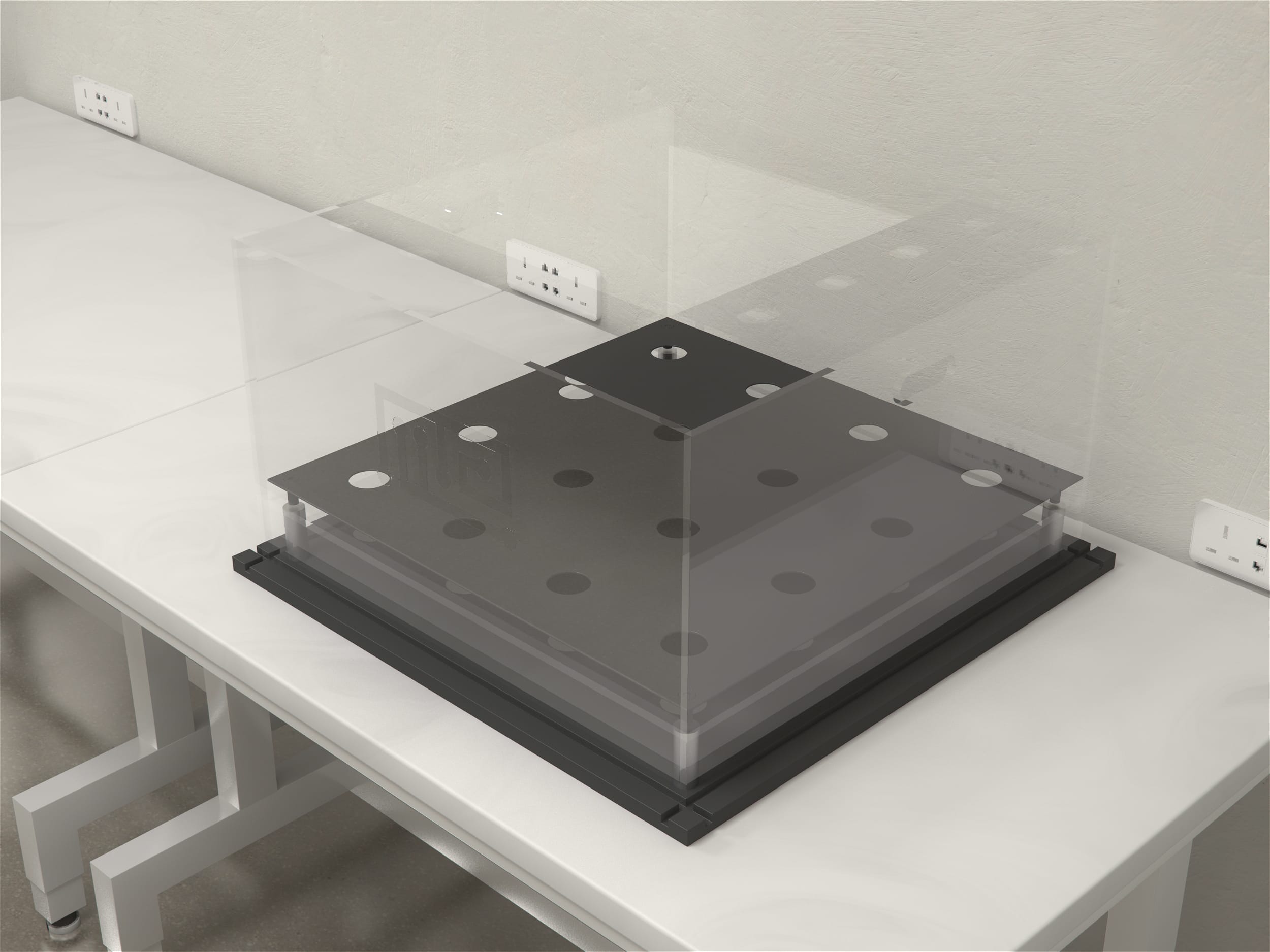 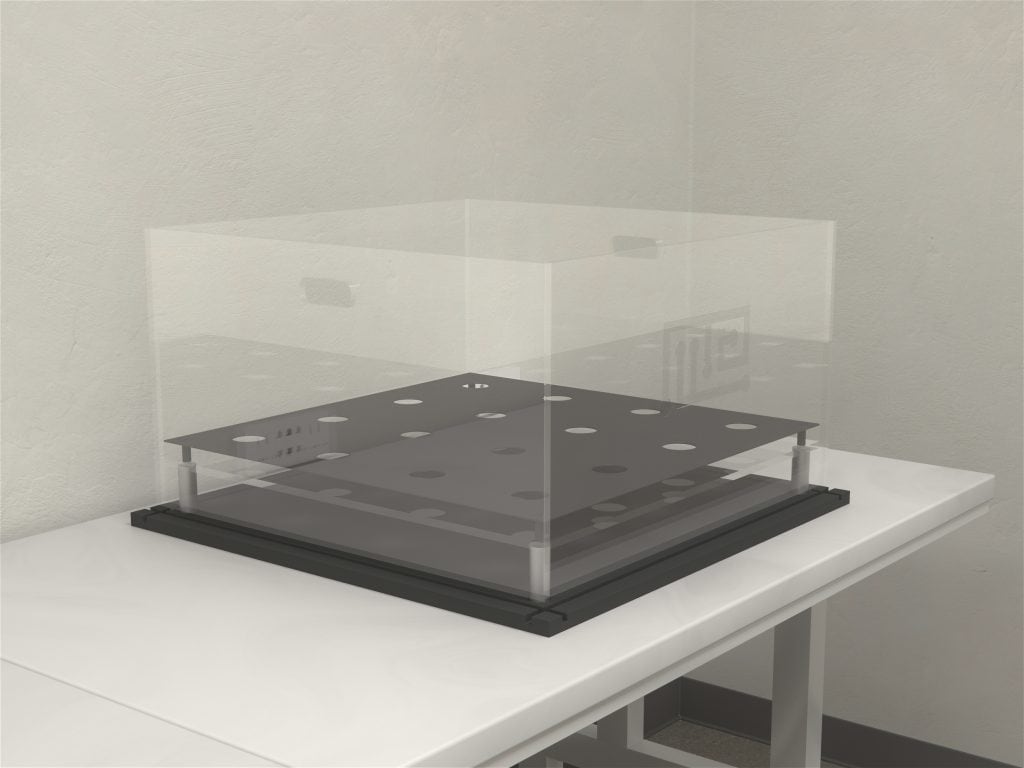 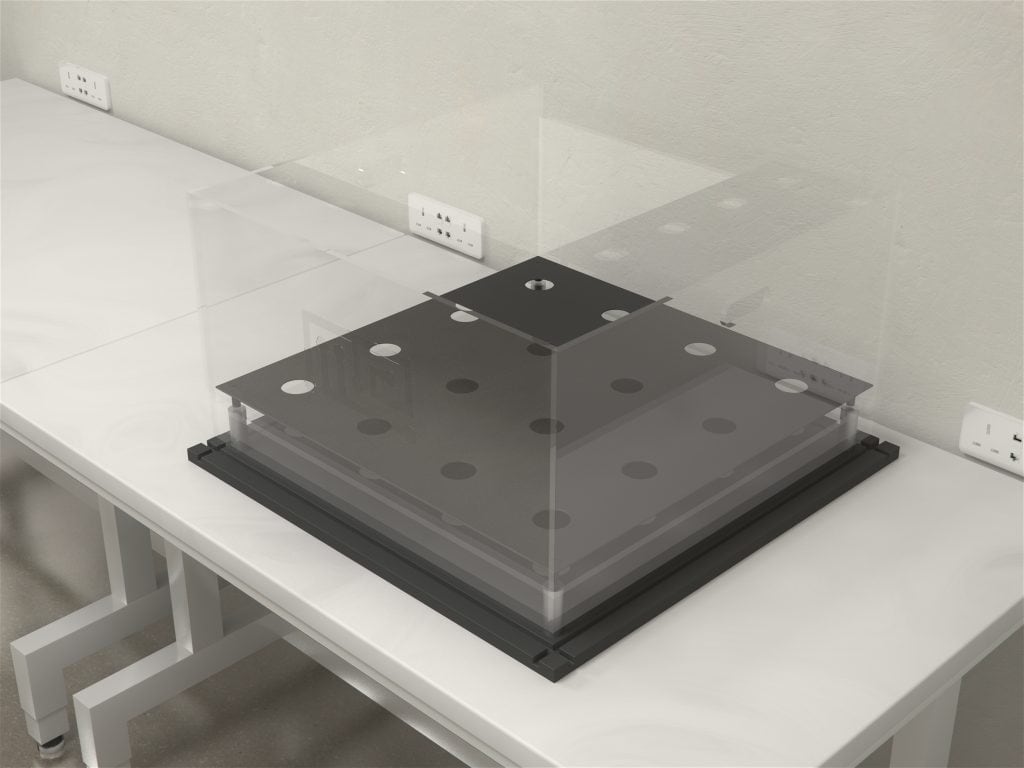 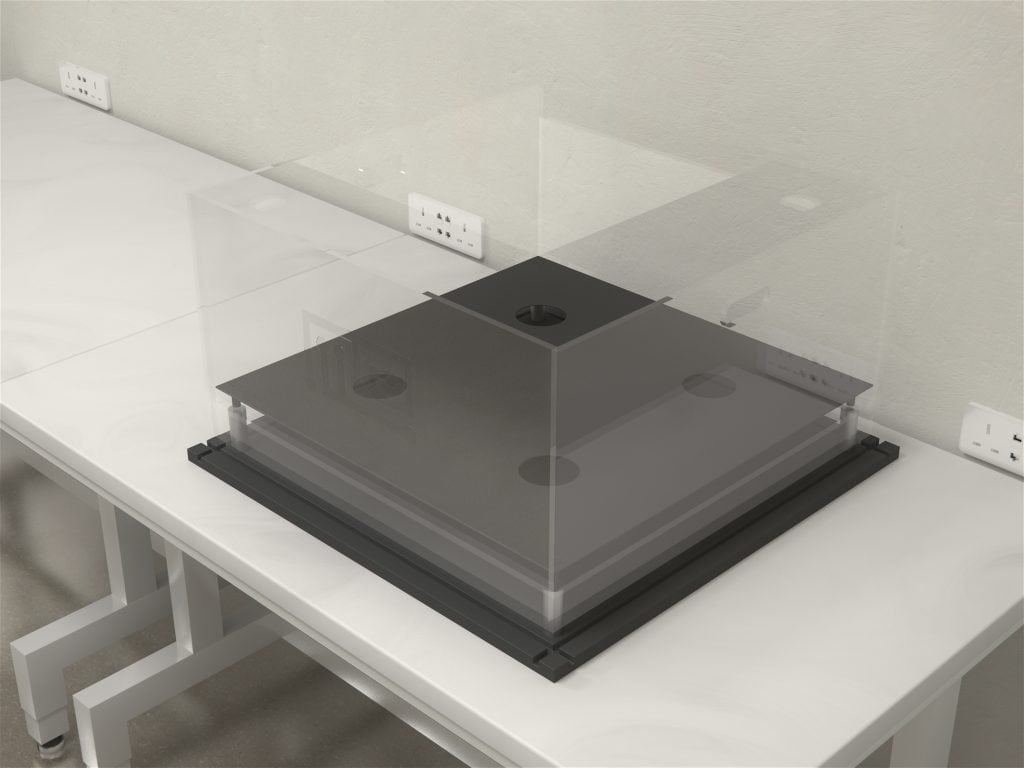 The modified Hole Board is a behavioral test used in neuroscience to assess multiple aspects of unconditioned behavior, cognition and social interaction. The MazeEngineers Hole Board comes with inserts of either 16 or 4 holes. The inserts are easily removable and can be used as an open field chamber for secondary experiments. The entire wall apparatus can be removed for easy  cleaning.

The modified Hole Board is a behavioral test used in neuroscience to assess multiple aspects of unconditioned behavior, cognition and social interaction. The modified Hole Board combines features from the traditional Hole Board, originally designed to investigate exploration in rodents (File & Wardill, 1975), and from the Open Field test, designed to evaluate exploratory behavior and anxiety (Hall & Ballechey, 1932); it has been designed to simultaneously measure multiple dimensions of unconditioned behavior in small laboratory mammals, mainly in mice and rats (Ohl et al 2001).

Unlike most behavioral tests, which measure a single behavioral parameter, the modified Hole Board is based on the concept that rodents show their full behavioral spectrum only in a rich testing environment that allows more complex behavioral observations. This test is therefore an alternative to using a behavioral test battery, since a broad spectrum of an animal’s behavioral profile can be investigated in one single test.

The test apparatus consists of an open field box whose central area contains a hole board, made up of small cylinders placed in three lines; the hole board is surrounded by an outer area divided into quadrants. A group compartment where the group mates of the experimental animal can be placed during the testing period is annexed to the box; by allowing the experimental animal to maintain social contact with its group mates during the test, the modified Hole Board minimizes stressful social isolation (Kim & Kirkpatrick, 1996).

A number of unconditioned behaviors, such as avoidance behavior, risk assessment, arousal, exploration, locomotor activity, habituation, and social affinity, can be observed using this apparatus.

This test can be combined with a food intake inhibition test, or with a novel object recognition test, for example, to allow the assessment of a wider range of behaviors. Cognitive skills, such as working and reference memory, can also be assessed by baiting and cueing some of the cylinders on the board.

The modified Hole Board was originally described in 2001 by Ohl and colleagues, having been validated for the assessment of drug sensitivity in both mice and rats (Ohl et al 2001). Since then, it has been used to perform comprehensive behavioral analysis in rodents, to determine the behavioral phenotype of potential animal models that mimic a psychopathological condition, and for pharmacological screening.

The standard modified Hole Board apparatus consists of an opaque experimental box (100 x 50 x 50 cm) separated from an additional compartment (50 x 50 x 50 cm) by a transparent, perforated partition; the group mates of the experimental animal can be placed in this additional compartment during the testing period. If the presence of group mates is unwanted or if individually housed animals are tested, the transparent partition can be replaced by an opaque partition.

The hole board is an opaque board (60 x 20) with 23 holes placed in three lines. All holes on the board can be covered by movable lids of the same material. The board is placed in the middle of the box, thus representing the central area of an open field. The outer area is divided by white lines into 12 quadrants: 10 rectangles (20 x 15 cm) and 2 squares (20 x 20 cm).

The Noldus EthoVision® XT video tracking system can be included for the monitorization of the box.

The purpose of the modified Hole Board is to perform complex behavioral observations by assessing multiple aspects of unconditioned behavior, cognition and social interaction in a control vs. disease model/intervention group.

By combining features from the traditional Hole Board and Open Field tests, the modified Hole Board allows the assessment of multiple behaviors. These include, for example: avoidance behavior, representing anxiety, through the measurement of the percentage of time spent on the board, the latency to the first board entry, and the number of board entries; exploration-related behavior, by assessing hole exploration, rearings on the board, and rearings in the box; risk assessment behavior, by analyzing stretched body posture; locomotor activity, by counting line crossings in the box, social affinity toward group mates, by determining the latency to the first group contact; physiological arousal, by assessing grooming, urination and defecation (Ohl et al 2001).

The protocol of the modified Hole Board can be adapted to the experimental needs.

Pre-training for the modified Hole Board

Two weeks prior to behavioral testing, animals should be transferred to the testing room and be kept there for habituation and to avoid possible effects of transportation to a testing location. All testing equipment should be installed before arrival of the animals in the facilities, to allow habituation to the presence of the equipment. The same person performing the behavioral experiment should handle the animals during the training period for habituation to the experimenter.

For group-wise testing in the modified Hole Board, all animals belonging to one social group (i.e., group mates) should be placed in the group compartment. After 30 min of habituation, each animal is placed into the experimental box for 5 min. For individual testing, each animal is transferred directly from the home cage to the experimental compartment. Training should be performed at the same time as the testing.

Evaluation of behavior using the modified Hole Board

Behavioral testing should be performed in the room where the animals are regularly housed and during the animals’ most active phase. Each animal is placed at the start position in one corner close to the group compartment facing the board and is tested for 5 min. All tests can be monitored by the Noldus EthoVision® XT video tracking system. An experienced observer can also live-score the behavioral parameters using a behavioral scoring software.

The experimental box should be cleaned after every test in order to avoid a bias based on olfactory cues.

Below are a few examples of some behavioral assessments that can be performed with the modified Hole Board (Labots et al, 2015).

Behavioral testing without the presence of group mates

1 – Transfer the animal from the cage to the start position in the box.

2 – Allow the animal to freely explore the box for 5 min, recording its actions with the video tracking system.

Behavioral testing in the presence of group mates – the interaction with the experimental animal and its cage mates during testing is measured.

1 – Place the group mates in the group compartment 10-30 min before testing of the experimental animal, to allow their habituation to the compartment.

1 – Familiarize the animals with an object in their home cage for 2 days before the experiment.

3 – Measure the time the animal takes to approach the novel and familiar object.

1 – Familiarize the animals with a reward (e.g., a piece of almond) for 2 days before the experiment, in their home cage, by offering it with tweezers and making sure they eat it.

2 – Scent all cylinders with an odor animals are attracted to (e.g., vanilla) and bait them with the reward beneath a grid, so the animals cannot remove it.

3 – Cue three cylinders with a colored ring contrasting with the color of the box and bait them with the reward.

4 – Stage 1: For each animal, perform four daily trials with a constant interval (e.g., 30-60 min) until all three rewards have been collected.

– Stage 2: Cue and bait three different cylinders and place the animals in the setup for four trials to test the reversal learning ability.

The data obtained from the modified Hole Board can be visualized by graphing any of the multiple behavioral parameters this test measures.

Below is an example of a few behavioral phenotyping parameters of two strains of mice using the modified Hole Board. Strain A is prone to anxiety, whereas strain B is not. Measurements of anxiety (time on board), exploratory behavior (holes explored) and physiological arousal (self-grooming) are presented.

Using graphs similar to these allows for easy visualization of an effect on unconditioned behavior. Animals prone to anxiety will decrease the time spent on the hole board area, will explore less holes and will spend less time self-grooming.

The modified Hole Board allows a significant reduction in the number of animals and the time needed to perform behavioral phenotyping.

The simultaneous analysis of multiple behavioral parameters avoids the possible effect of testing order when performing a behavioral test battery.

Unlike most behavioral tests, for the modified Hole Board, animals do not need to be food deprived to increase their motivation to solve the behavioral task (Hanell & Marklund, 2014).

The behavioral bias induced by social isolation is circumvented by placing group mates in an annexed compartment that allows visual, auditory and olfactory contact.

File SE, Wardill AG. Validity of head-dipping as a measure of exploration in a modified hole-board. Psychopharmacologia, 44(1):53-9 (1975).

Request a Hole Board