1
Dual pellet dispensors allow for rewards in the IDED set shifting task
2
The IDED interaction area comes with the following apparatuses per side: 2 textile cues, a nose poke hole, and an olfactory stimulus
3
An automatic door separates the two IDED chambers with an IR detection mechanism. The automatic door slides and opens with Conductor software control
4
A house light comes with each chamber 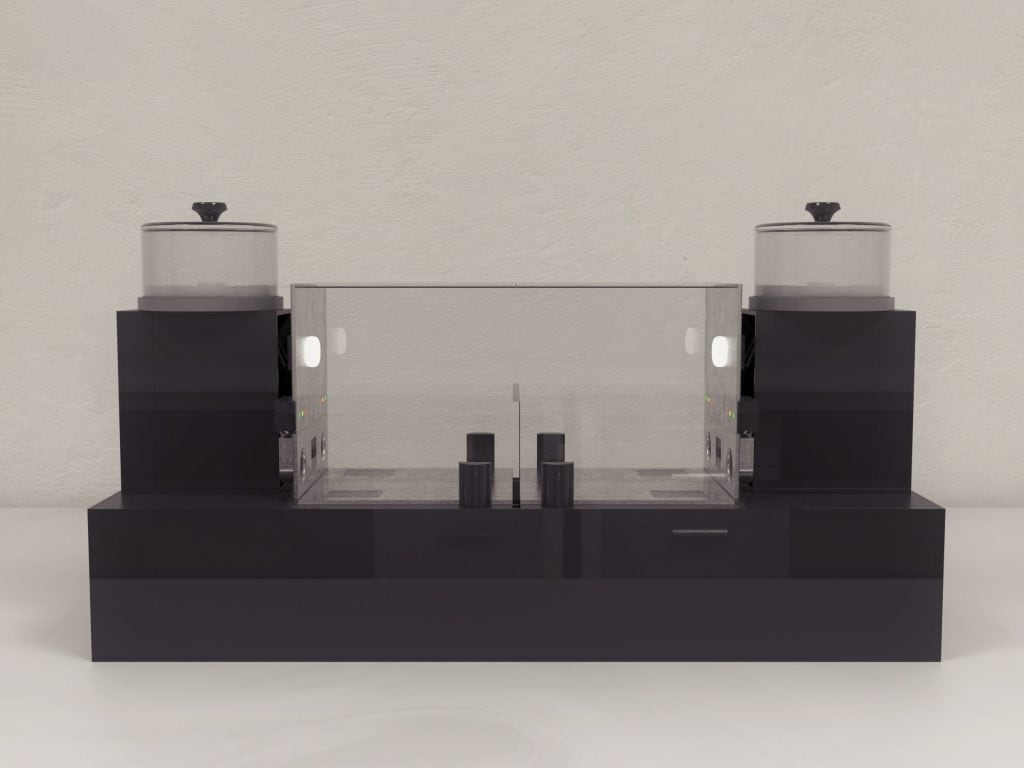 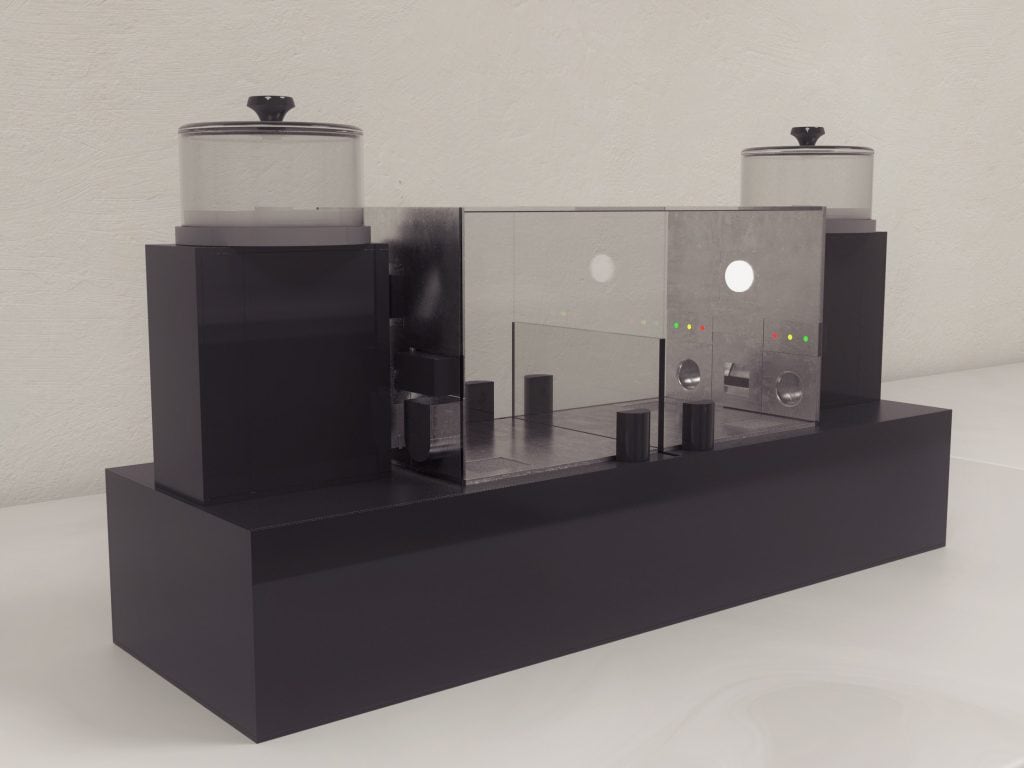 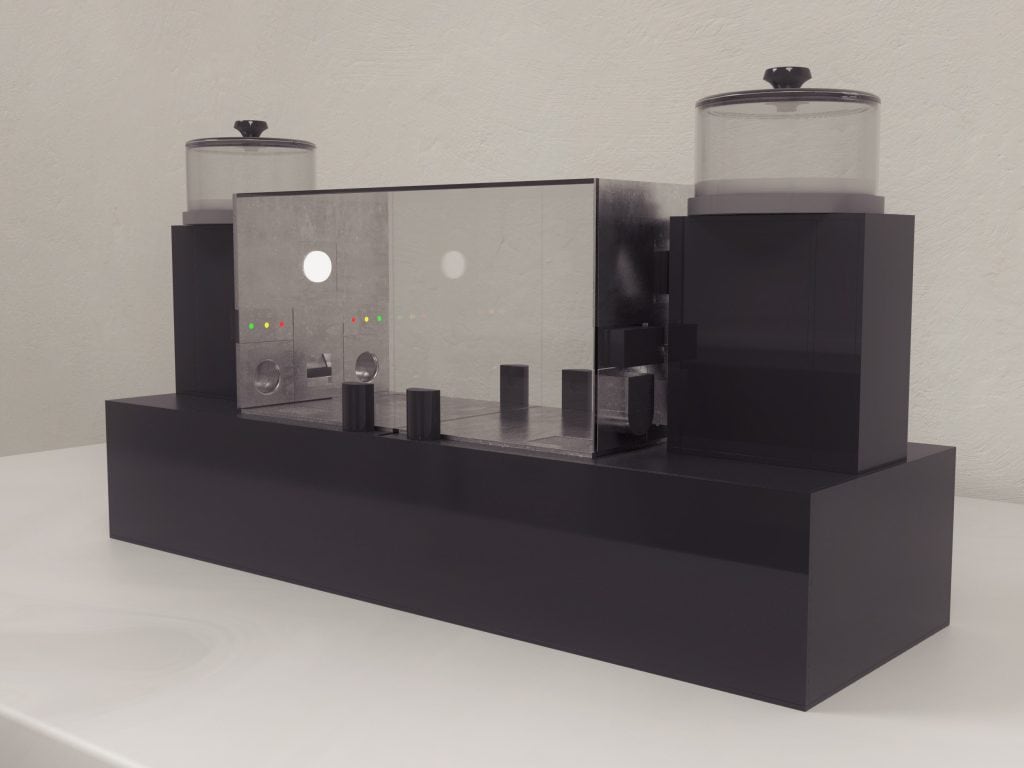 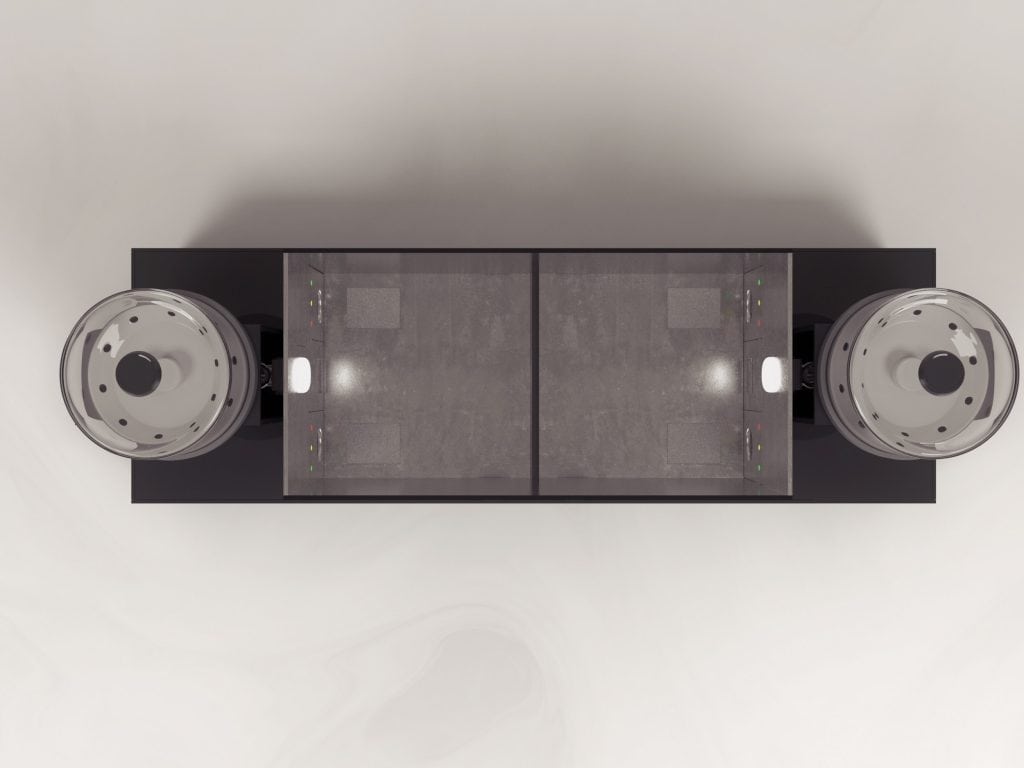 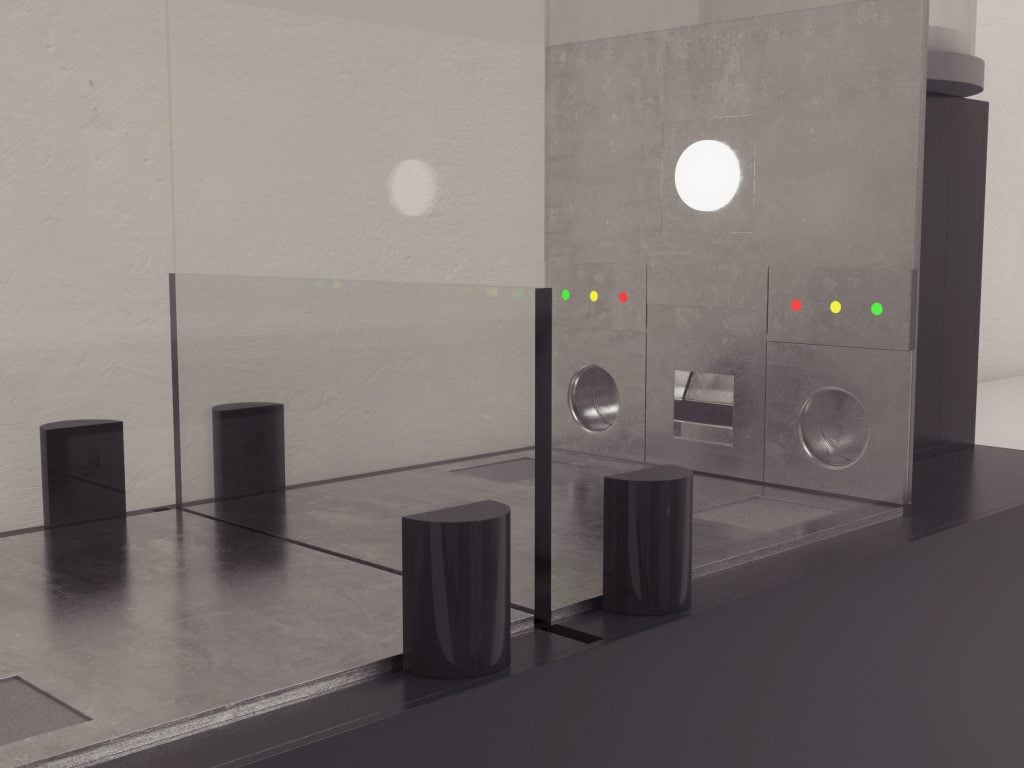 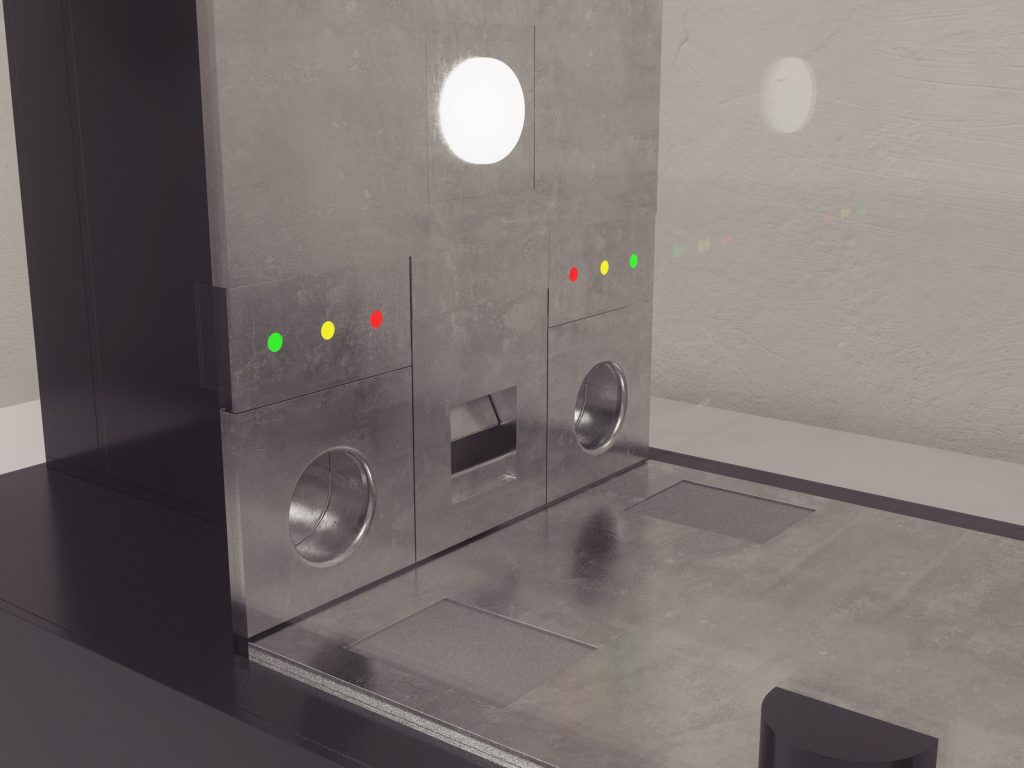 The Operant IDED set shifting task chamber from MazeEngineers includes the following parts per chamber as listed below. Controlled using the Conductor software. The software collects and logs data while simultaneously allowing you to control the operant chamber and set up easy to configure experiments. Easy save for each experimental module you set up in Conductor, with integration to Ethovision and Neuralynx, and Pulsepal. Easy to modify for all future scenarios as well.

The Operant Intra- and Extra-Dimensional Set-Shift Task is a behavioral test used in neuroscience to study executive function by assessing cognitive flexibility. Executive function refers to high-level cognitive processes including rule generation, behavioral selection, and strategy evaluation, and is primarily regulated by areas in the frontal cortex (Lie et al, 2006).

The Operant Intra- and Extra- Dimensional Set-Shift Task measures cognitive flexibility and executive function through the assessment of multiple cognitive abilities, including discriminative learning, reversal learning, attentional set-formation and attentional set-shifting, both within the same dimension (intra-dimensional shift) and between different perceptual dimensions (extra-dimensional shift). These abilities are used as a measure of (Keeler and Robbins, 2011). Response latencies can also be used as an index of speed of information processing, decision-making and problem solving (Robbins, 2002).

This test is a preclinical research version of the intra- and extra-dimensional attentional set-shifting (ID/ED), of the Cambridge Neuropsychological Test Automated Battery (CANTAB), used in humans to identify specific cognitive dysfunctions in a wide range of neurological and psychiatric disorders (Roberts et al, 1988).

Likewise, the Operant Intra- and Extra- Dimensional Set-Shift Task can be used to assess cognitive function in the context of neurological and psychiatric disorder models, as well as for drug and/or genetic screenings relevant to cognitive function with high relevance to translational medicine.

Rodent versions of these attentional set-shifting tests for primates have been previously generated (Birrell and Brown, 2000), but with several limitations, namely being manually run and therefore highly labor-intensive and difficult to standardize. This automated version overcomes those major limitations and increases the throughput of testing.

The apparatus consists of two identical chambers separated by a transparent dividing door that can be automatically controlled to allow the animal to move between chambers. Each chamber has two nose-poke holes with infrared photo beams, and, between them, a food receptacle with photo beams where a pellet dispenser delivers the food reinforcement.

Each nose-poke hole can be equipped with multiple changeable stimuli varying in three perceptual dimensions (odor, sight, tact). To deliver olfactory stimuli into the nose-poke holes, a dilution olfactometer is used to automatically control the presentation of pairs of scents to the nose-poke holes. For visual stimuli, light-emitting diodes (LED) are placed on top of each nose-poke hole. For tactile stimuli, changeable floor textures can be mounted on a sliding support in front of each nose poke hole. A camera is placed on the top of the apparatus in order to record basal alternation and locomotor activity. The presentation of the stimuli and data collection can be performed using the Noldus EthoVision® XT software.

The purpose of the Operant Intra- and Extra-Dimensional Set-Shift Task is to assess executive function and cognitive flexibility in rodents in a control vs. disease model/intervention group, by assessing strategy shifting and/or reversal learning.

There are several versions of protocols to be used with the Operant Intra- and Extra-Dimensional Set-Shift Task, depending in the specific behavioral assessment to be made.

Below are examples of protocols that allow the assessment of different aspects of cognitive flexibility, as described for mice. A more detailed version of these protocols can be found in Scheggia and Papaleo F, 2016.

Animals can be housed individually or in groups, depending on the experimental needs. Single housing should be used for experiments requiring food-restriction, such as to allow a better control of food intake.

After a few days of habituation to the testing facilities, without handling or food restriction, animals should be handled daily for around 5 min, and for at least 3-5 days before beginning behavioral testing.

The animals’ weight should be recorded on the first day of handling, when food restriction begins. Over the days of handling, animals’ daily food intake should be gradually reduced to bring them to a target weight of 85-90% of their initial weight. At the end of each handling session, 10-20 reward pellets should be placed in the animal’s cage to habituate them to the reinforcement that will be used in the tasks.

Each animal should always be tested at approximately the same time of day.

Training 1 (day 1) – Place the animal in the apparatus with the dividing door open for 40 min; use only neutral stimuli (see Table 1) for all different dimensions; each nose-poke in any nose-poke hole results in a pellet delivery in the food receptacle.

Training 2 (day 2) – Place the animals in the apparatus with the dividing door closed; use only neutral stimuli for all different dimensions; each nose-poke in any of the nose-poke holes results in a pellet delivery in the food receptacle; when the mouse retrieves the reward, open the dividing door to give the mouse access to the other chamber for the next trial; repeat for 40 min.

Training 3 – Train the animals to perform two simple discriminations (SD1 and SD2; e.g., peach vs. sage; velcro vs. film; light cue on vs. light cue off) to a criterion of 8 correct responses out of 10 consecutive trials. The animal must learn to choose the nose-poke hole where the correct stimulus is presented. Do not use the same stimuli again during the next phases of the test.

In the stuck-in-set paradigm, three different perceptual dimensions are manipulated; all sessions start by placing the animal in a chamber with neutral stimuli. Before the beginning of a trial, the stimulus cues are switched on in the opposite chamber. Then the dividing door is opened to give access to the other chamber where the stimulus cues are on. A “relevant dimension” is the one containing the correct option.

The two-dimension paradigm is another condition to measure attentional set-shifting. In this case, only two perceptual dimensions are used throughout the test.

Table 1 – Examples of stimuli used in the operant intra- and extra- dimensional set-shift task. From Scheggia and Papaleo F, 2016; originally published in Scheggia et al 2014. Selected stimuli should elude any confounding factor and/or bias due to avoidance or preference. Five pairs of stimuli for each dimension allow a within-subject testing of all shifts, with novel stimuli at every shift.

Image 1 – Example of the stuck-in-set and two-dimension paradigms. From Scheggia and Papaleo F, 2016, as adapted from Scheggia et al 2014. 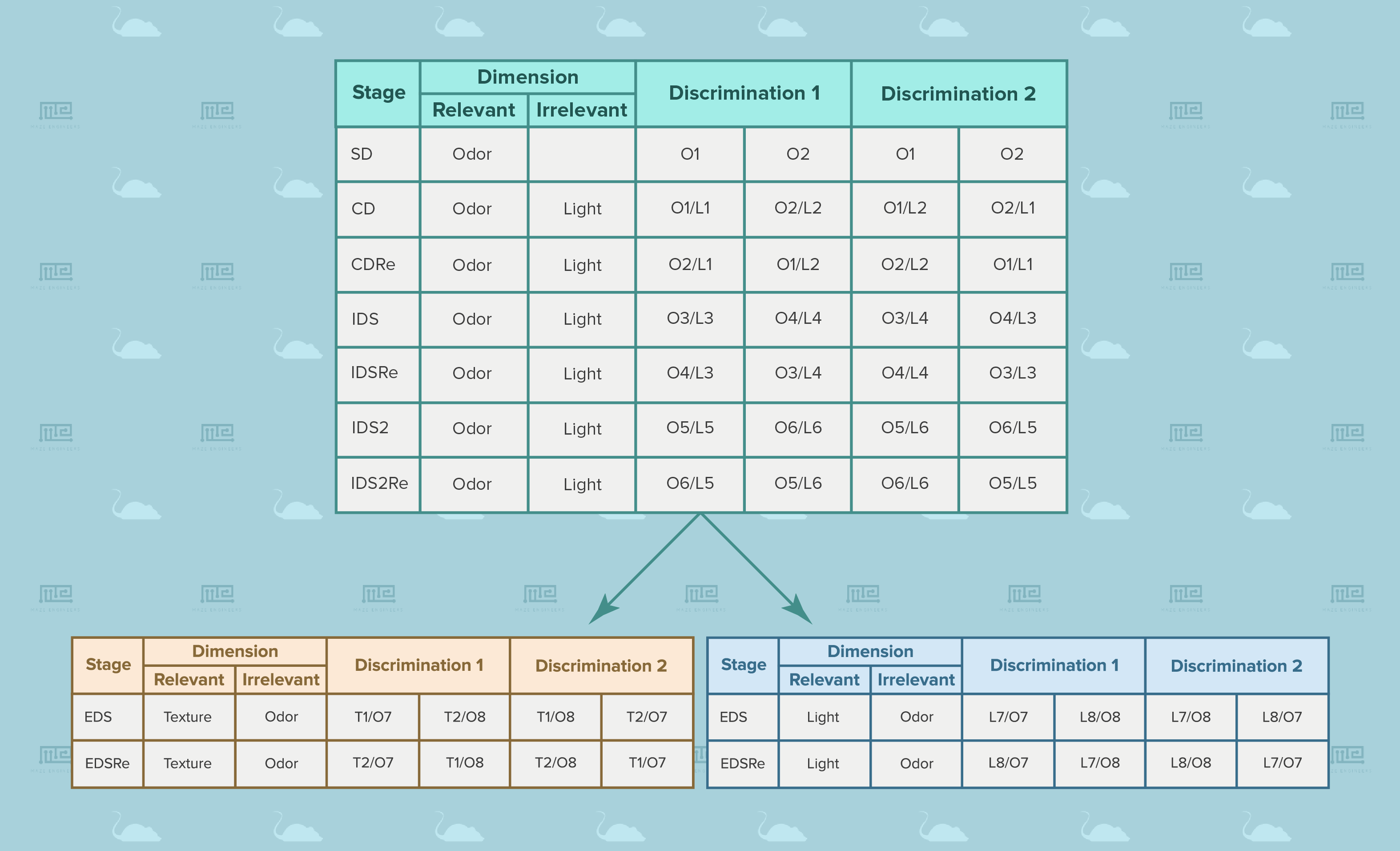 Different versions of the Operant Intra- and Extra-Dimensional Set-Shift Task have been used (e.g. Birrell and Brown, 2000), but with several limitations, namely being manually run and therefore labor-intensive and difficult to standardize. This automated version overcomes those major limitations and increases the rate of data collection and throughput.

The data obtained with the Operant Intra- and Extra-Dimensional Set-Shift Task can be visualized by graphing, for each stage, trials to criterion, time to criterion, or latency to respond.  Below are presented example graphs showing the effect of a disease model on those behavioral measures. Further examples can be found in Scheggia and Papaleo F, 2016 or in Scheggia et al, 2014. 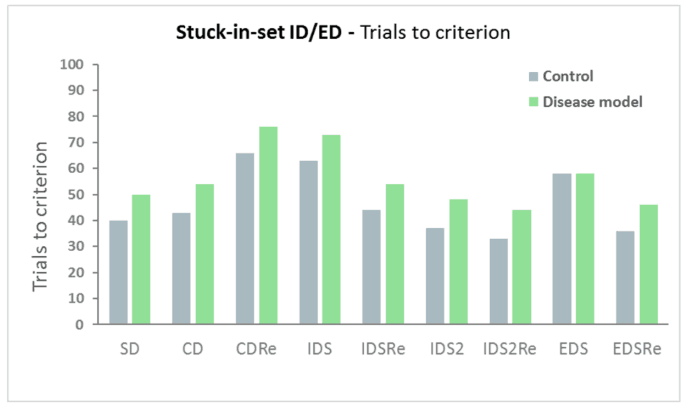 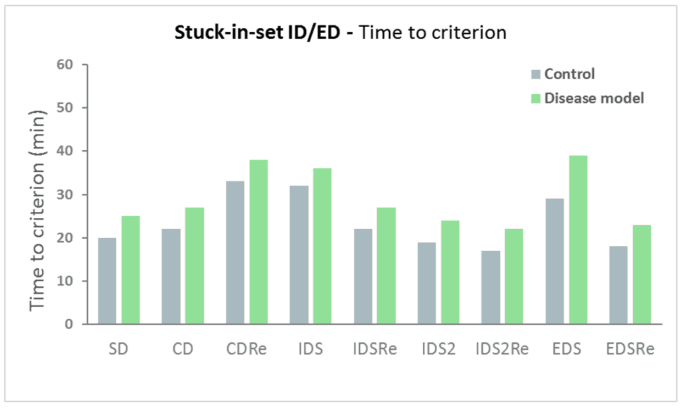 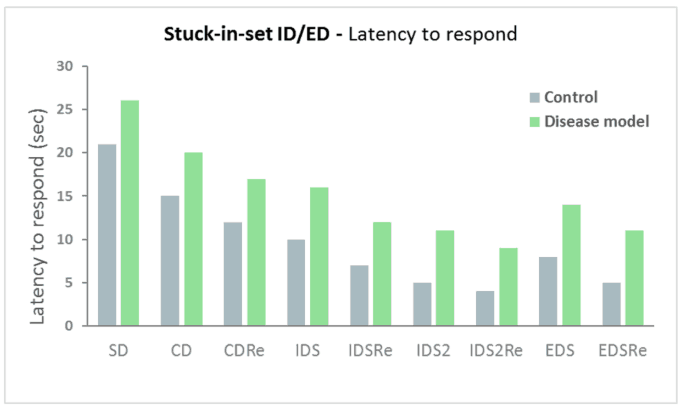 Using graphs similar to these to compare behavioral flexibility between control and disease or treatment groups allows for easy visualization of the effects on executive function. Animals with impaired cognitive flexibility (due to a neurological disorder, for example) may take longer to reach criterion and have a higher response latency.

The main strength of the Operant Intra- and Extra-Dimensional Set-Shift Task is the possibility of performing multiple behavioral assessments associated with cognitive function. This automated version of the task dramatically improves the rate of data collection and throughput and eliminates subjectivity in the analysis.

Keep in mind that experiments entailing food restriction may require specific approval of an institutional regulatory body before any procedures may begin.