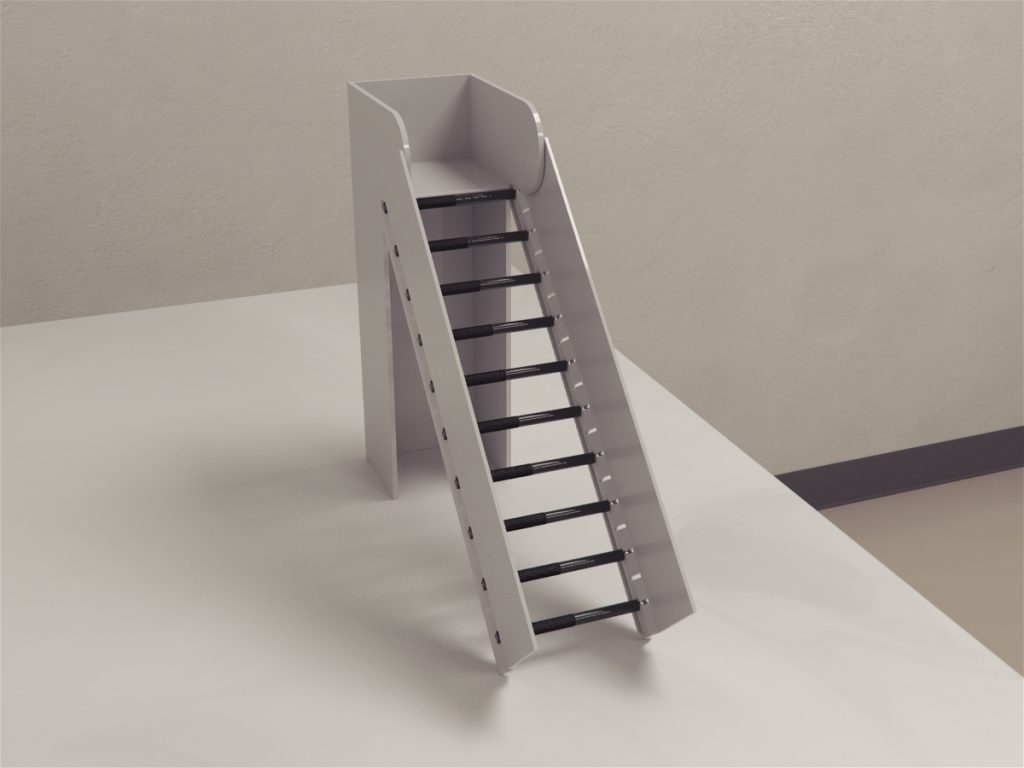 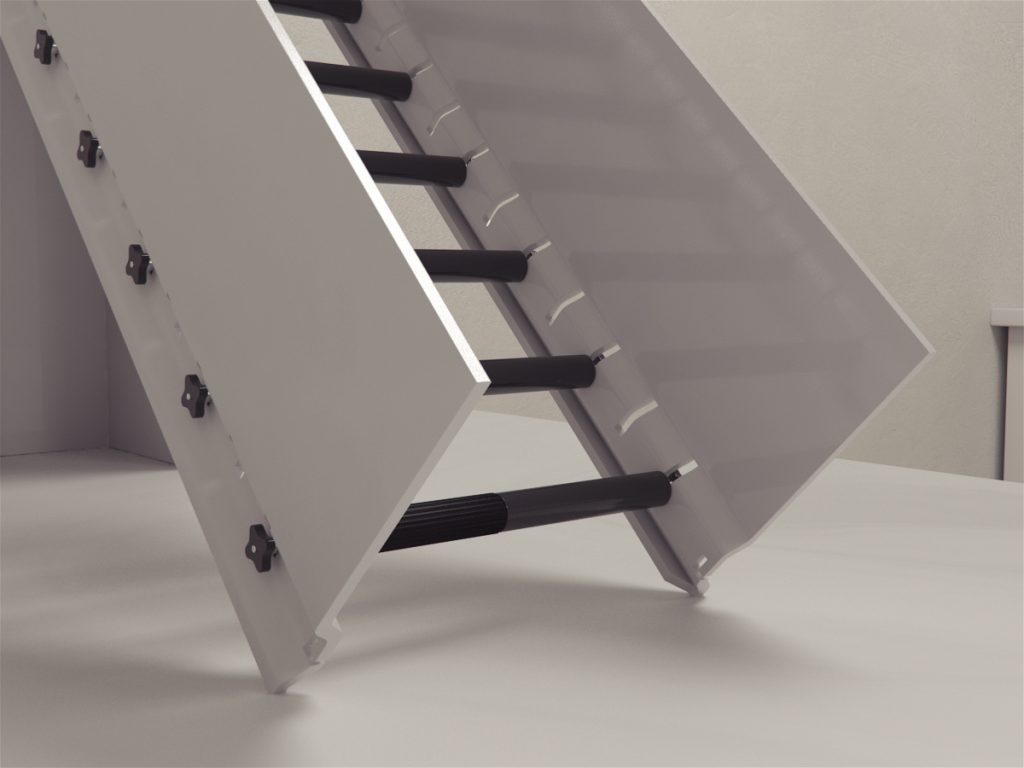 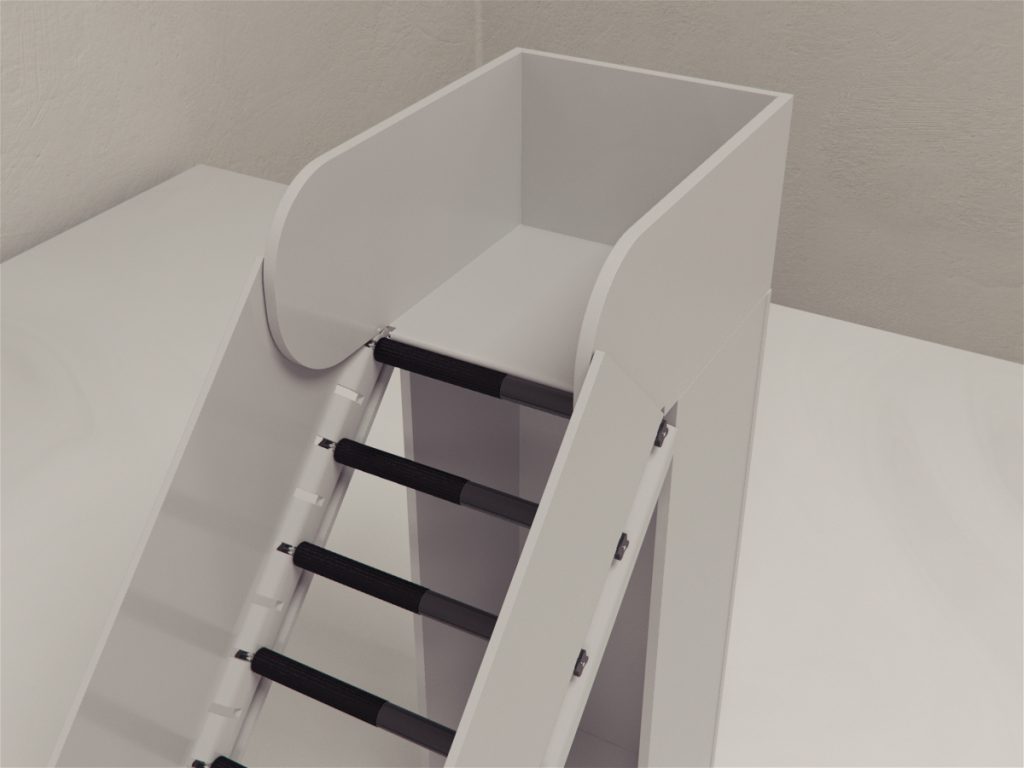 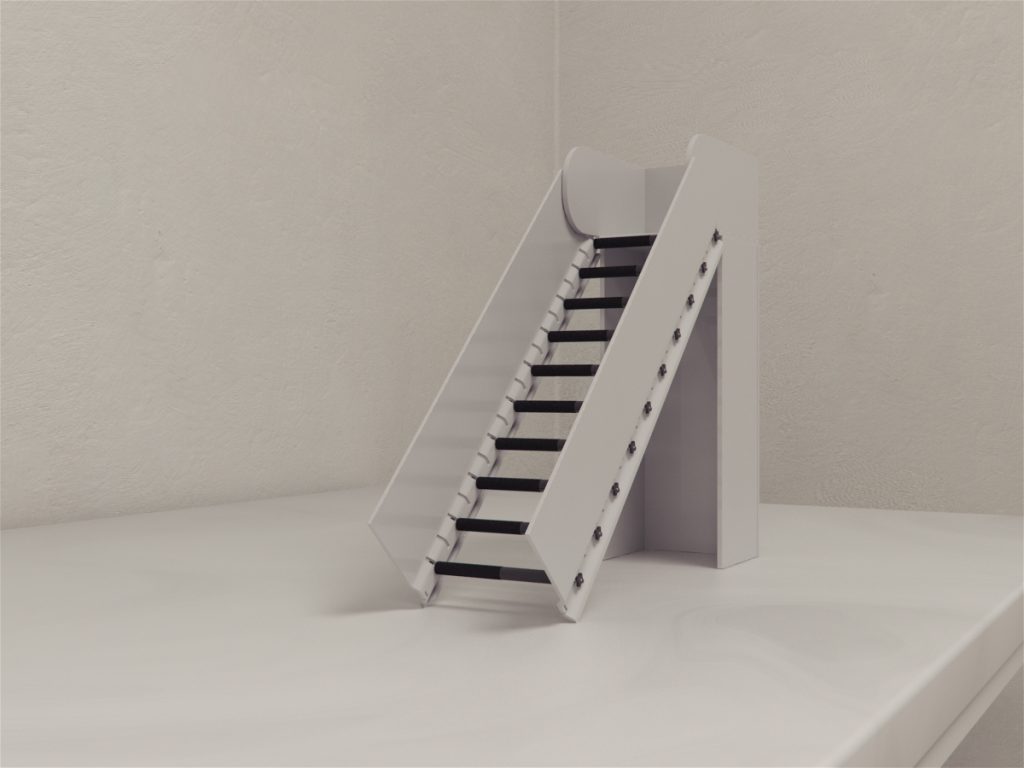 Incline rolling ladder is made up of a ladder opening to a platform, set at an angle of 45 degrees with rungs that have an immobile textured part, and a movable rolling smooth part. The subjects are allowed to climb the ladder to reach the platform. The data is collected about the number of successful steps, the number of slips, and the parts these occurred from.

Incline rolling ladder test is a novel test sensitive to tactile and proprioception sense. Fagoe et al. developed incline rolling ladder test to study functional deficits in rats with dorsal column (DC) lesions. The dorsal column is one of the ascending pathways in the posterior spinal cord carrying sensory afferent nerve fibers for tactile information, discriminatory touch, vibration, and proprioception to the brainstem, so tests for detecting changes in the functions due to lesions in DC should be sensitive to these stimuli.

Lesions of the spinal cord in experimental studies generally results in mild functional deficits that are short-term and difficult to detect as time passes. An ideal functional test should be able to detect such transient deficits and any improvements after experimental treatments. The incline rolling ladder test was inspired by the testing paradigms for texture discrimination used by Vierck et al., in monkeys which concluded that texture discrimination could be detected in the long-term after an injury. Later a study by Ballermann et al., in rats using tactile discrimination further provided evidence for using rat models for testing sensorimotor deficits after spinal cord injuries.

Incline rolling ladder is made up of a ladder opening to a platform, set at an angle of 45 degrees with rungs that have an immobile textured part, and a movable rolling smooth part. The subjects are allowed to climb the ladder to reach the platform. The data is collected about the number of successful steps, the number of slips, and the parts these occurred from.

The incline rolling ladder consists of a 34 cm long ladder attached to a platform for landing at the top of the ladder. The ladder is set at an angle of 45 degrees. The ladder has 9 adjustable rungs. Each rung has a half smooth and mobile surface, and half textured and immobile surface.

The subjects are housed under standard conditions with food and water available at all times, and a 12 hour light/dark cycle. Before starting the training, the entire apparatus should be cleaned to remove the presence of any unwanted stimuli from influencing the performances. The tests should be performed in a well-lit sound isolated area. The tracking and recording of the trials can be performed using tracking and video system such as the Noldus EthoVision XT.

Subjects are trained every day for 2 weeks before getting baseline test measurements, which will be followed by the subjects being given treatment or undergoing a procedure as per the experimental question. The test is repeated every week after the treatment/procedure to observe the changes and any recovery for 8-12 weeks.

Set up the incline rolling ladder on a flat surface. Place one subject at the foot of the ladder and allow it to climb to reach the platform. Each subject is put through three trials per day, randomly changing the orientation of the ladder rungs with respect to smooth/mobile and textured/immobile surfaces in every trial.

Spinal cord lesions induced during such studies show significant functional deficits early on, but these effects attenuate quickly, so most of the tests are not sensitive enough to detect small deficits as time goes on. The incline rolling ladder test was found to be sensitive to detect deficits over 6-7 weeks after injury consistently. The study concludes that the incline rolling ladder test may prove useful in research involved in monitoring functional recovery in spinal cord lesions and their treatment.

The data collected from the test is based on the number of successful steps, number of slips and the type of rung (smooth or textured) from which these occurred. The data is divided into two measurements:

The incline rolling ladder is relatively new and so far tested mostly in rats, so it needs more research not only in rats but other animals to further prove its sensitivity. The apparatus can be modified by adding more rungs to the ladder or developing a protocol with an increased number of trial-runs during testing to further increase the sensitivity of the test.