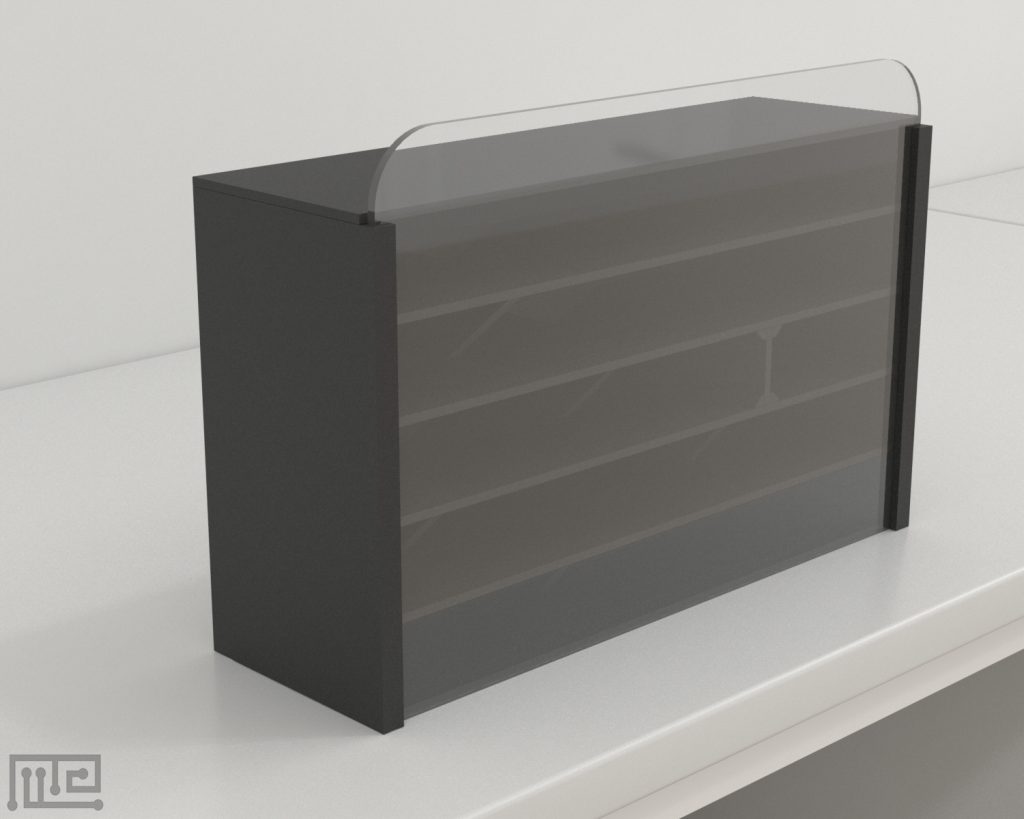 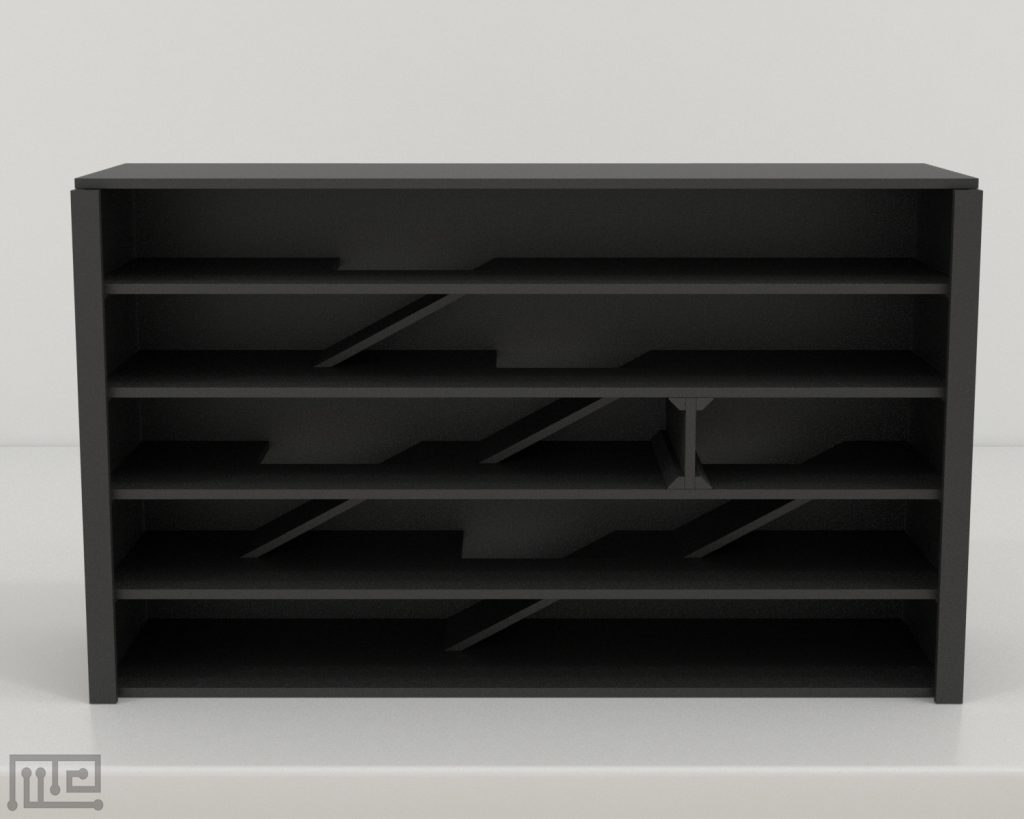 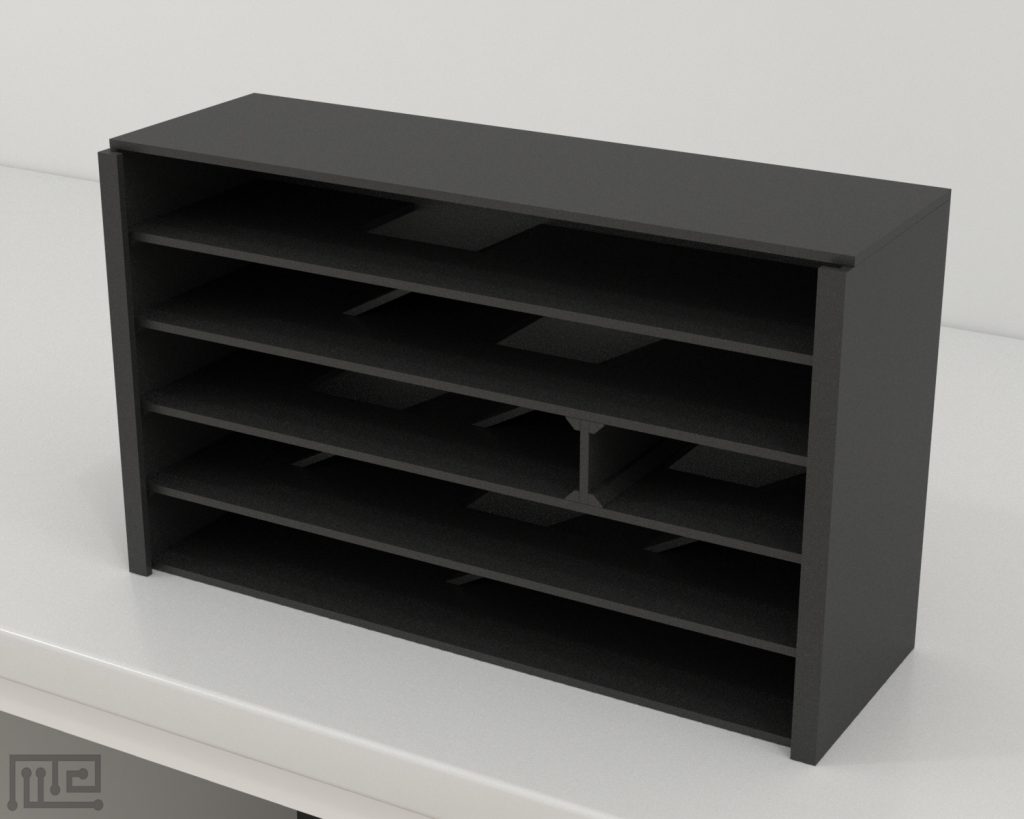 The Inclined Plane Maze was used in a study by Bingham, W. E., & Griffiths, W. J. (1952) to determine whether rearing animals in very different environments during infancy would measurably affect learning, emotionality, or susceptibility to sound-induced convulsions during adulthood.

The inclined-plane maze consisted of five levels, and in order to reach the goal box the rats had to traverse the maze from lower to upper levels.

An error was counted each time the subject failed to traverse the appropriate ramp to reach the goal.

The Inclined Plane Maze is used to study spatial learning and memory in rodents. It consists of a rectangular-shaped box that contains five levels that are connected by ramps. It also contains a removable front cover that inhibits the subjects from leaving the apparatus.

Rodents housed in enriched environments have been shown to demonstrate greater learning and memory abilities as well as reduced anxiety-related behaviors in various experimental paradigms. Among popular experimental paradigms such as the Sucrose Preference Test and the Forced Swim Test, the Inclined Plane Maze has also effectively been used to observe the effect of different living conditions on rodent behavior (Morano, Hoskins O, Smith, & Herman, 2019; Bingham & Griffiths Jr., 1952). In the Inclined Plane Maze, the subject is required to traverse from the lower levels of the maze to the upper level using the ramps. If the subject continuously chooses the right ramp at each level, it reaches the food reward, while an incorrect choice leads to a dead end. The food reward is used as positive motivation, which reduces the effect of stress on task performance.

Other apparatuses used to observe rodent behavior include the Incline rolling ladder, the Geotaxis test, and the Tilt ladder.

The Inclined Plane Maze is a rectangular-shaped apparatus that consists of five levels. Each alley measures 4 x 4 x 24 inches. One or two inclined plane boards are present at each level that measures 1 x 4 x 60 inches with one end rested on the floor, and the other end rested on a 5 x 8 inches platform. A swinging door that measures 3 x 5 inches in dimension is also present that opens into a 4 x 12 inches food compartment. The apparatus comes along with a removable, transparent front cover that prevents the subject from leaving the apparatus.

Clean the maze before and after trials to eliminate any olfactory cues from previous trials. A tracking and recording system such as the Noldus Ethovision XT can be used to assist with observations.

Place the food reward in the goal box. Place the subject in the apparatus and allow it to traverse from the lowest level of the maze to the topmost level to reach the goal box. Conduct five trials a day until 40 trials are completed.

Investigation of the effect of different housing conditions on rat behavior

Bingham and Griffiths Jr. (1952) investigated whether rats housed in different environments during infancy would have differences in learning, emotionality, and susceptibility to sound-induced convulsions during adulthood. Forty-eight inbred albino rats were divided into three groups of 16 rats, with each group having eight males and eight females. The subjects were placed in their respective environments when they were 21 days old. Group 1 was placed in a 6 x 9-ft room that was lined with sheet metal; Group 2 was placed individually in 2 x 5 x 4-inch “squeeze” boxes and Group 3 that was used as the control group was placed in 14 x 9 x 9-inch living cages. Group 1 was also subjected to three feeding situations of 10-day duration each that included food access from alleys, inclined planes, and swinging doors. Group 1 and Group 2 were removed from the experimental environments at 51 days old and were individually placed in standard cages for 14 days. Following the 14 days, behavioral testing was performed. The subjects were first familiarized with the Warner-Warden Maze from 78-81 days of age. The maze consisted of 12 pathways arranged into right and left alleys, 12 dead ends, and included start and goal boxes. After familiarization, the subjects were tested on the apparatus at 82 days old, where they were required to navigate from the start box to the goal box. At 102 days of age, the subjects were tested on the Inclined Plane Maze, where they were required to traverse from the lower level of the maze to the upper level to reach the goal. The subjects were required to perform five successful trials per day until 40 trials were completed. After the Inclined Plane Maze trials, the subjects were then tested on the Lashley Jumping Apparatus. The subjects were required to walk or jump from a distance of 11, 13, and 17 cm through each open window of the apparatus for ten times. The open window contained a black card, which was used as a positive stimulus, while the closed window contained a white card. In addition to a food reward, a 6-volt electric foot shock was also administered from the foot of the jumping stand of the apparatus for motivation. Results indicated that no differences in performances were observed between the subjects housed in “squeeze” boxes and laboratory cages in all the tests. Moreover, no significant differences were found between the experimental and control groups on the discrimination test, emotionality test, or test for susceptibility to sound-induced seizures. A supplementary experiment was also performed using a group of 10 Wistar-King inbred rats that were placed in an identical experimental room as Group 1 subjects at 21 days of age. In addition, the second group of ten littermates was also used and placed in an experimental room that included a broken chair, a box, and a broken cage. At 78 days old, the subjects were tested on the Warner-Warden Maze. Results indicated that no significant differences in task performance were seen between the two groups. However, subjects reared in the experimental room with the broken chair, box, and broken cage had significantly greater maze learning performances than subjects reared in laboratory cages.

The following parameters can be observed using the Inclined Plane Maze:

The Inclined Plane Maze is used to evaluate learning ability and memory in rodents. It provides the opportunity to explore whether the spatial learning and memory abilities of rodents differ depending on different environmental conditions. The Inclined Plane Maze allows easy acquisition of data. It utilizes food rewards as positive motivation instead of aversive stimuli.

The subject’s explorative drive is an important factor in obtaining reliable results. Proper handling of subjects is essential to inhibit stressful responses. The presence of unnecessary stimuli may affect the way the subject performs the task. Tasks may also be influenced by the age, gender, and strain of the subjects. Since the task utilizes food reward as positive motivation, variability in food quality and quantity may be essential for proper task performance.