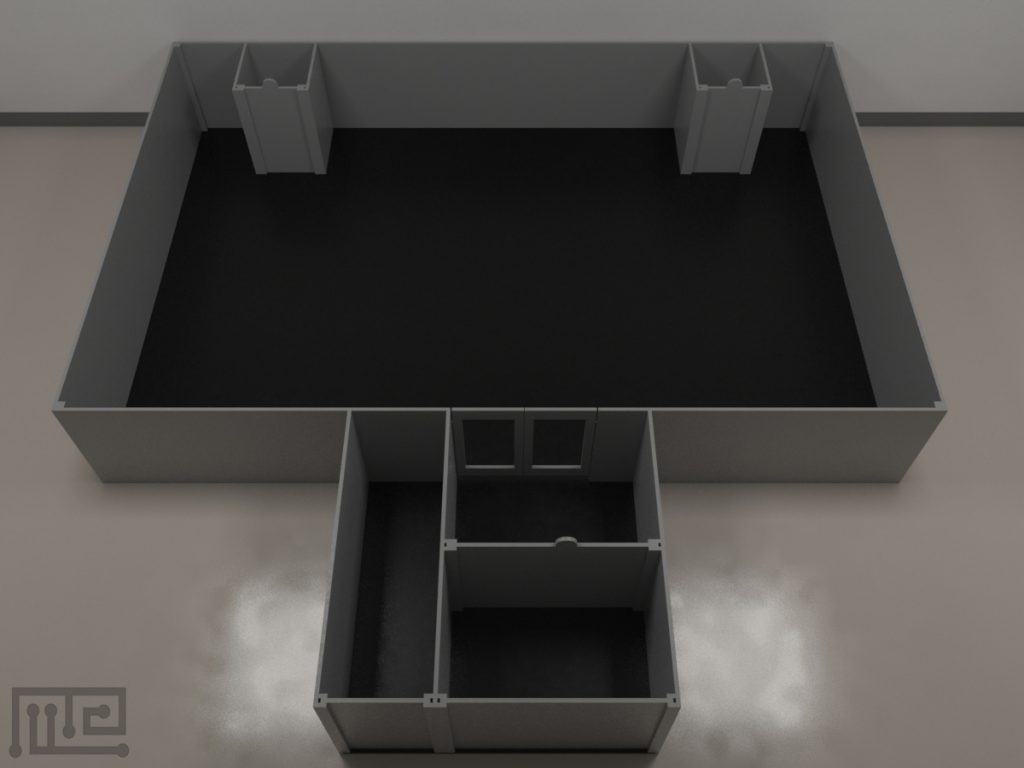 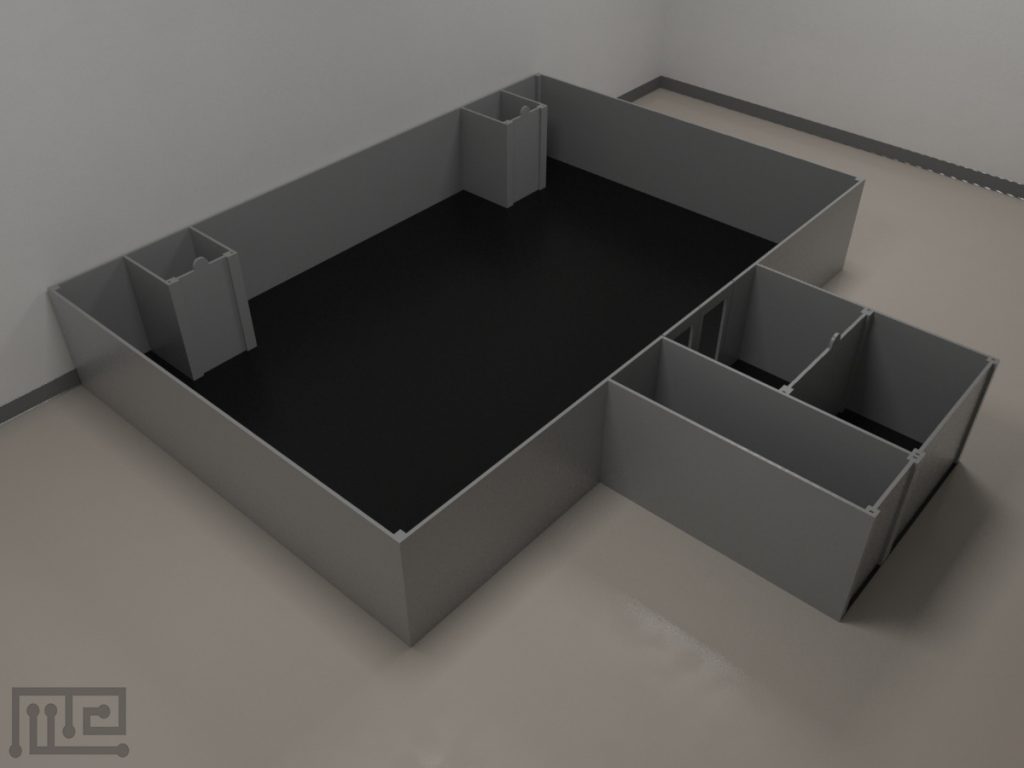 The Judgement Bias Apparatus is one of the two apparatus used by Roelofs S. et al. (2017), to assess female and male pigs’ performance in a spatial holeboard and judgment bias task.

The apparatus consists of a rectangular arena connected to a start box via an antechamber. Entrance of pigs from the start box to the arena is controlled by a guillotine door, operated by a rope and pulley system.

Goal-boxes where the pigs could obtain rewards are situated at the back wall of the arena, near the corners. Each goal-box can contain a food bowl. Goal-boxes could be opened and closed using guillotine doors which could be operated from outside the apparatus by rope and pulley systems.

The Judgement Bias Apparatus is used in the assessment of the affective/emotional states of pigs. The emotional state of animals can be influenced by the way they interpret stimuli. Emotional state can also influence how animals cognitively process different cues (Roelofs, Boleij, Nordquist, van der Staay, 2016). Since animals are incapable of verbally reporting their feelings, judgement bias testing helps identify their emotional state and obtain an objective measure of their cognitive performance.

The Judgement Bias Apparatus uses association based learning to investigate the influence of judgement bias on decision-making behaviors. It consists of an open arena that has two goal boxes placed at the back wall. The task relies on the subjects learning an association between positive and negative cues with larger and smaller rewards placed in each goal box. Ambiguous stimuli that are different from the trained reference cues are then introduced. The animals that have a positive affective state are more likely to display optimistic choices towards the ambiguous stimuli. In contrast, animals that have a negative affective state are more likely to display pessimistic choices.

Different training protocols can easily be applied to the Judgement Bias Apparatus. The pigs can be subjected to various treatments that manipulate their emotions to study the effects they have on judgement. For example, subjects that are housed in enriched environments tend to have a positive affective state (Douglas, Bateson, Walsh, Bédué, and Edwards, 2012). Understanding the emotional state of pigs is a crucial step in improving their welfare. Therefore, the Judgement Bias Apparatus can effectively be used for animal welfare research studies. Additionally, the Judgement Bias Apparatus can be helpful in the development of novel therapeutics for diseases and disorders that affect the emotional state of individuals to improve their quality of living.

The judgment bias apparatus consists of a rectangular arena that measures 3.6 x 2.4 m. The start box measures 1.2 m2 and is connected to the arena via an antechamber. A guillotine door allows entrance from the start box to the arena. Inside the arena, goal boxes (40 cm wide), which contain food bowls, are placed at the back wall, near the corners. The goal boxes also contain guillotine doors, which allows them to be opened or closed.

Clean the apparatus before and after every trial to prevent the influence of any odor cues from previous trials. Rinse the apparatus if the subject soils it during testing. Appropriately light the apparatus. A tracking and recording system such as the Noldus Ethovision XT can be used to assist with observations.

The following is a sample protocol to observe judgment bias in pigs in response to ambiguous tone cues:

Placed a subject into the apparatus and allow it to explore and habituate with the environment. After habituation, perform forced trials. Place a reward in one of the goal boxes and keep it open. Place the subject into the start box. Open the guillotine door and allow the subject to enter the arena and retrieve the reward. After the subject retrieves the reward, close the goal box, and allow it to return to the start box. Conduct four sessions of 12 consecutive trials.

Conduct open choice trials. Place a reward in the goal box associated with the negative cue and keep it open. Place a subject into the start box and allow it to wait for it to open. Allow the subject to enter the arena and retrieve the award. After the subject retrieves the reward, close the goal box, and allow it to return to the start box. Conduct two additional trials, one positive and one negative, in random order.

Next, conduct positive and negative free trials. Keep both of the goal boxes open and place a reward in the correct goal box. Place a subject into the start box and play the tone cue associated with the reward. Open the door and allow the subject to enter the arena and choose a goal box. If the subject chooses the incorrect goal box, make it wait in the main chamber for a 90-second time-out before allowing it to return to the start box. If the subject does not choose a goal box within 30 seconds, apply the 90-second time-out punishment. Conduct 5 negative and five positive free trials in a daily changing pseudorandom order. Conduct trials until the subjects reach a learning criterion of at least four out of 5 correct choices for both positive and negative free trials in three consecutive sessions. Replace the first three positive and first three negative free trials with open choice trials during every fifth session.

Roelofs, Nordquist, van der Staay (2017) investigated whether male and female pigs would differ in their cognitive performance when tested on the Holeboard apparatus, and the Judgement Bias Apparatus.  Ten pairs of male and female piglets were socially housed in an enriched environment and used in the study. The subjects were first tested on the Holeboard apparatus to test their spatial learning and memory. Chocolate candies were used as rewards and placed in the baited holes. Observation of the order of visits and revisits to the baited holes allowed the evaluation of the subject’s working memory and reference memory. The results indicated no sex differences in working memory and reference memory scores. However, the female subjects had a higher total number of visits to the holes, a higher average number of locations visited, and a higher number of rewards found in some trials as compared to the males. In the Judgement Bias Apparatus, the subjects were trained to associate positive or negative tone cues that consisted of 1000 Hz (high) and 200 Hz (low) tones with either a large (four candies) or a small reward (one candy). The subjects were then required to performed discrimination trials in which both goal boxes were kept open. If the subjects chose the incorrect box or took more than 30 seconds to choose a box, it received a punishment. The subjects were required to perform discrimination trials until they reached the learning criteria in a maximum of 30 discrimination sessions. The results indicated that out of the 20 piglets tested, one female and one male did not reach the learning criteria. In the remaining piglets, no differences were found in the average number of trials performed to reach the learning criteria. During Judgement bias testing, three ambiguous trials were introduced, which consisted of using an ambiguous tone that was different from the learned positive and negative tones. The ambiguous tone consisted of either a near-negative ambiguous tone (299.07 Hz), an intermediate ambiguous tone (447.21 Hz), or a near positive ambiguous tone (668.74 Hz) depending on the value of the high and low reference tones. During ambiguous trials, the goal boxes did not contain bait. If the subjects chose the goal box that would have contained a larger reward during training, it indicated an optimistic choice. The results indicated that the cue type affected the number of optimistic choices made, where a greater number of optimistic choices were observed with the near positive ambiguous tone. However, the number of optimistic choices decreased with repeated testing. No effect of sex was seen in the number of optimistic choices made.

Investigation of Judgement Bias in conventional pigs and Göttingen minipigs

Murphy, Nordquist, and van der Staay (2013) investigated judgement bias in seven conventional female pigs and eight female Göttingen minipigs using the Judgement Bias Apparatus. The subjects were trained to associate a positive tone cue with a large reward in one goal box and a negative tone cue with a smaller reward in the other goal box. Ambiguous tone cues, different from the learned positive and negative tones, were then introduced, and the choice of the positive or negative goal box was recorded. The ambiguous tones consisted of a near-negative ambiguous tone, an intermediate ambiguous tone, and a near positive ambiguous tone. After a four week break, testing was repeated. However, the subjects were restrained in a mini crate for 15 minutes before and after trials to induce a negative emotional state. After a two week break, testing was repeated on the Judgement Bias Apparatus; however, the subjects were not restrained in the mini crate. The results indicated the all the subjects reached the learning criteria in a maximum of 16 sessions. No effect of the breed was seen in the number of optimistic choices made to any of the ambiguous cue types. The number of optimistic choices decreased with repeated testing for both breeds.

The following can be observed using the Judgement Bias Apparatus:

The Judgement Bias Apparatus can be used to test the effects of the emotional state of pigs on their decision-making behaviors. Different rewards can easily be placed in the goal box in the apparatus. In addition, different positive and negative cues can also be used. The goal boxes contain guillotine doors that can easily be opened or closed to allow or restrict access to rewards based on experimental needs. The pigs can be subjected to various treatments that alter their moods to test the effect of treatment on their judgement. The Judgement Bias Apparatus can also be used in animal welfare research to improve their welfare by understanding their emotional needs.