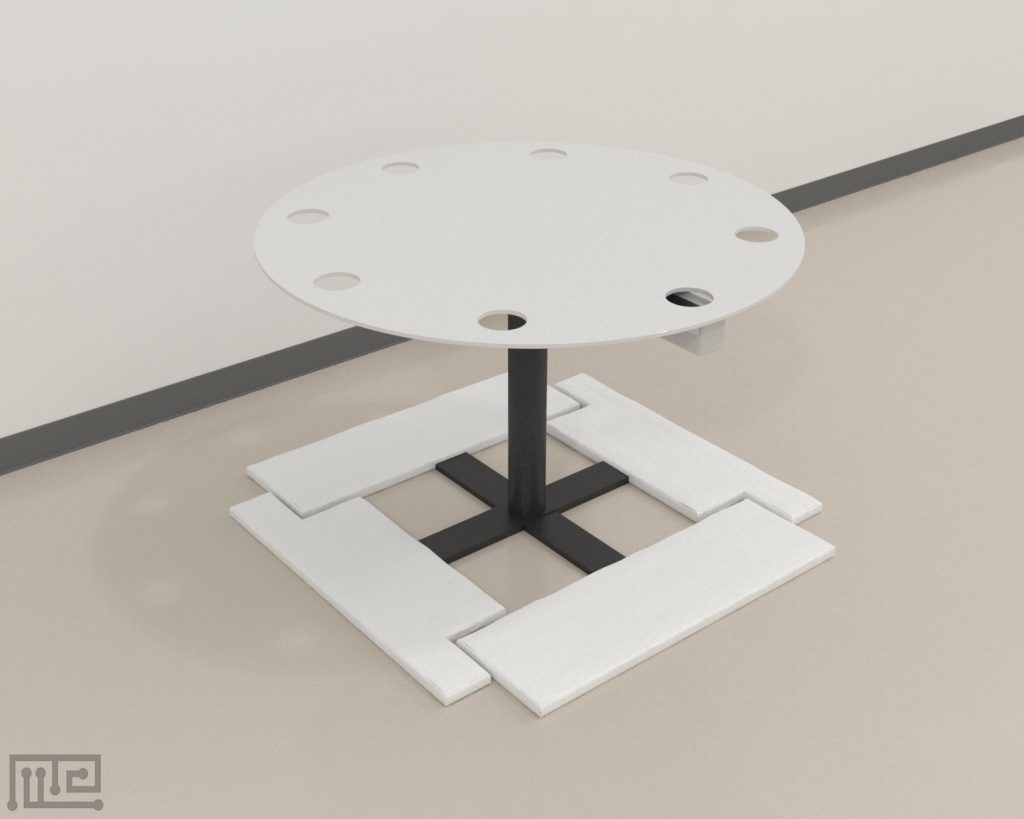 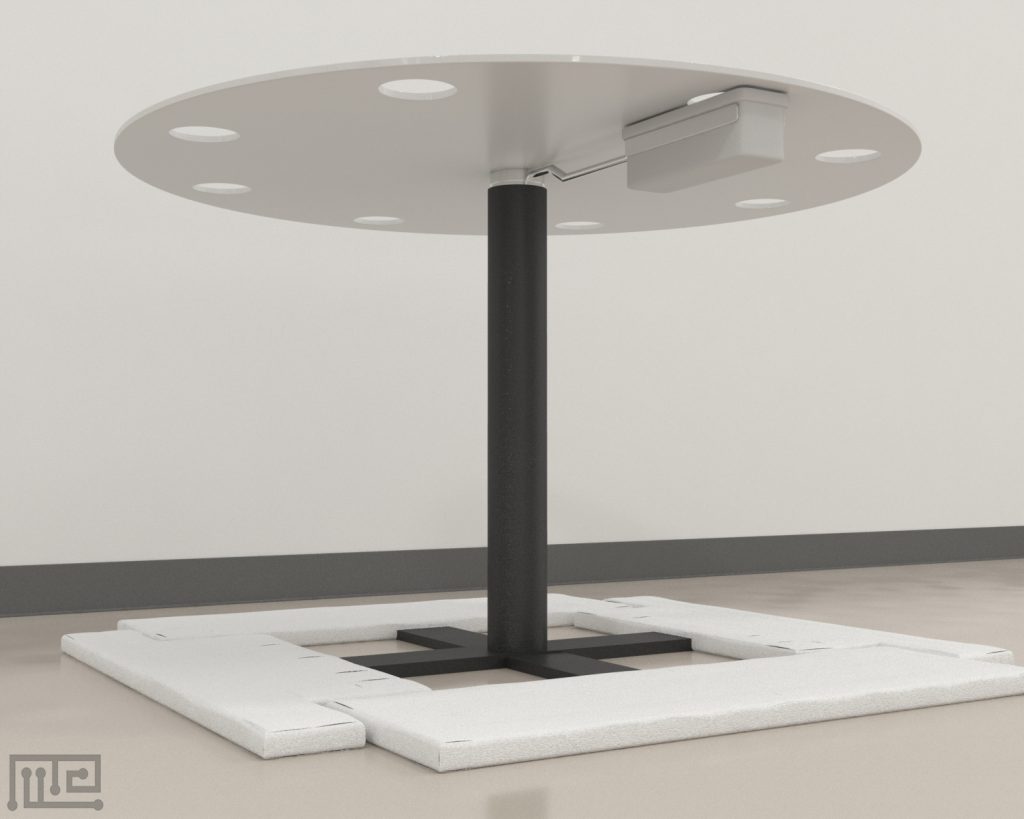 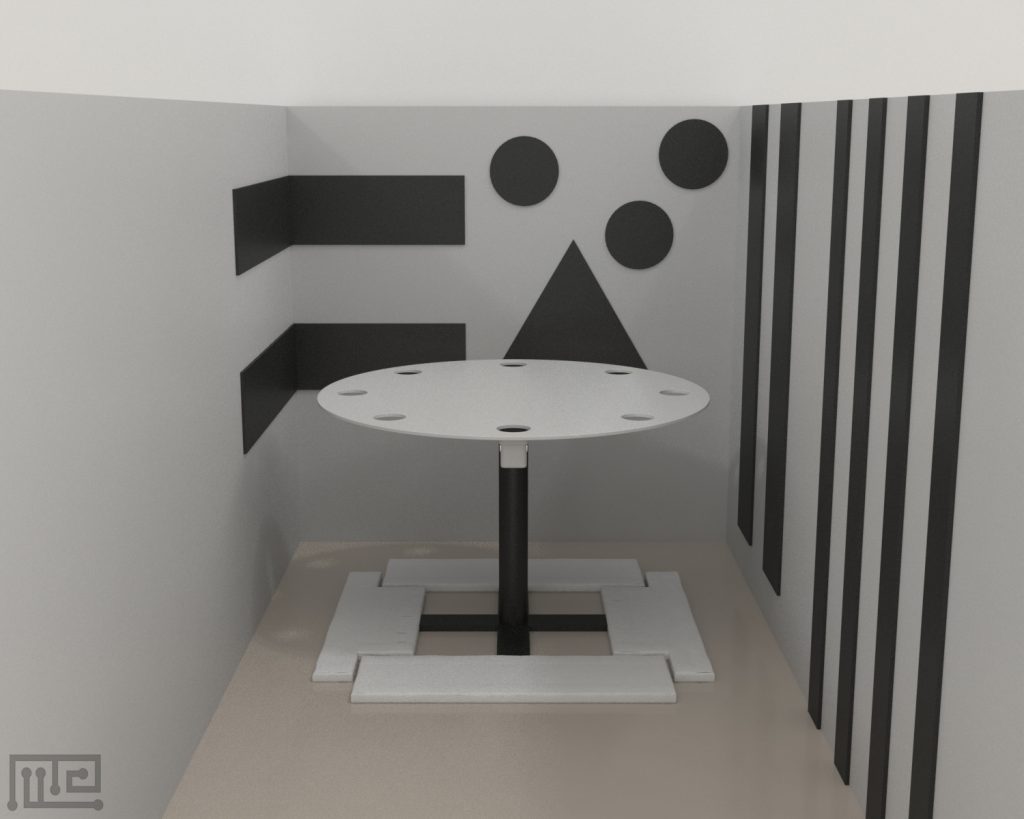 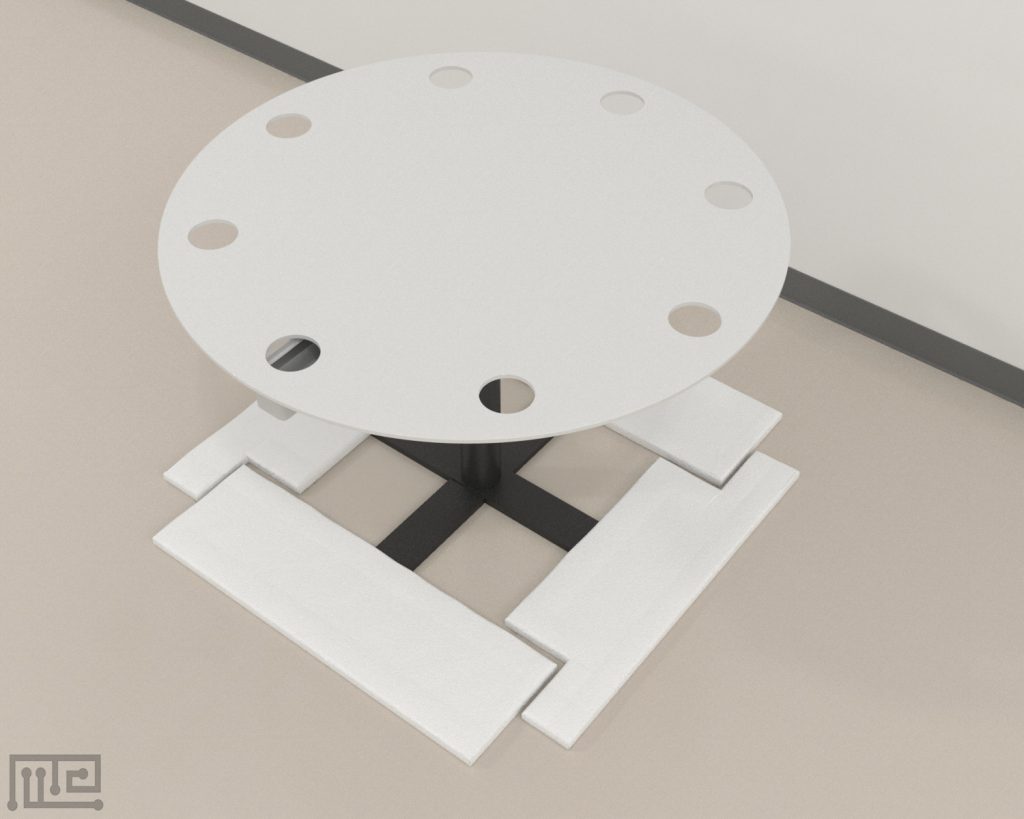 It has recently been shown that a Barnes maze adapted for juvenile rats can be used to assess the maturation of spatial learning and memory, as spatial navigation ability first emerges around the end of the third postnatal week (McHail et al., 2018).

The maze adapted for juvenile rats consists of a round white platform that is smaller than the adult maze with eight evenly spaced holes around the perimeter, a reduced number of perimeter holes compared to the adult apparatus. Distal visual cues (extra-maze contextual cues) are placed around the maze and used by the animal to determine the spatial location of an escape box hidden underneath one of the perimeter holes. These spatial cues are enlarged to allow better visualization for the younger animals.

The Juvenile Barnes Maze is a smaller version of the Barnes Maze that is specifically designed for the assessment of spatial learning and memory in juvenile rodents. Compared to the alternate Morris Maze test, the Juvenile Barnes Maze does not impose water and temperature stress on the subjects (Albani et al., 2014). The maze consists of a white circular platform with eight equidistant holes around the boundary. The subject locates the hidden end box situated beneath the end holes by utilizing the distal visual cues. The subject utilizes aversive behavior towards brightly lit light to find the location of the dark end box (McHail, Valibeigi, & Dumas, 2018; Valibeigi, McHail, Kimball, & Dumas, 2018). The juveniles Barnes maze can effectively assess hippocampal development and maturation in juvenile rodents. It can also be used for the assessment of memory impairment with aging.

Other variants of the Barnes Maze used to study spatial learning and memory in rodents include the Randomized Barnes,  the Radial Arm Barnes Maze, the Delayed Matching to Place Barnes Maze, and the Labyrinth Barnes Maze.

The Juvenile Barnes Maze is composed of a circular platform (1.2 m in diameter) with eight equidistant end holes (10 cm in diameter) around the boundary. The end holes are 5 cm away from the edge of the platform.  The platform is elevated 0.75 meters above the ground with the help of a PVC stand. The maze is also provided with rectangular escapes boxes, each measuring 9.19 inches in length and 3 inches width. A rotating PVC bar is placed below the circular platform to change the location of the end box as required. Foam cushions are provided to allow cushioned falls; they are placed around the maze’s circumference in the ground. The maze is also provided with four curtains with different geometric shapes:  horizontal rectangle (163 in length x 25 cm in width), triangle (55 cm base, 64 cm in height), circles (25 cm in diameter), vertical rectangle (25 in length x 147 width cm), stripes (8 cm in width x 163 cm in length). These shapes provide visual cues for the subject.

Clean the maze before each trial. Setup the maze by placing the visual cues (four curtains) around the maze in four directions. Keep them unaltered throughout the experiment. Rotate the maze between training blocks by keeping the escape location relative to the direction of the visual cues. Apply background white noise to mask the auditory cues.

Conduct pretraining of the subjects for three days. On day 1, place the home cage of the subject in the testing room for 15 minutes before exposing the subject to the maze. After habituation, pre-train the subjects in dim light. Setup the maze by placing the cushion foams in the ground around the circumference of the maze. Place dime-sized droplets of liquid formula equally over the face of the circular platform with the help of an injection. Carry the subject from its home cage and place it in the center of the circular platform. Allow the subject to explore the maze for 15 minutes. In the case of fall, place the subject back to the center of the platform and allow it to explore.

On days 2 and 3, pre-train the subjects in bright light.  First, habituate the subject by placing the home cage of the subject in the testing room for 15 minutes. Now set up the apparatus by allocating each end hole an alphabet from A to H in a clockwise fashion. Allocate one end hole with an escape box and attach it to the rotating arm beneath the hole. Divide the maze into four quadrants and assign four starting positions. Randomly select a start location and place the subject in the starting location in such a way that it faces the center of the maze, and its paws align with the left and the right end hole. Release the subject, hide behind the curtains, and observe the subject’s movement on the screen.  Allow the subject to search for the escape hole for 60 seconds. If the subjects couldn’t find the escape hole within 60 seconds, then guide the subject by moving its paws towards the escape hole. Conduct training in blocks where each block consists of four trails. Keep an inter-block interval of 15 minutes. Conduct 5 bright light training blocks on day 2 and 5 blocks on day 3.

After 5 training blocks on both day 2 and 3, conduct an immediate probe to test the subject’s ability to recall the escape hole location. Remove the escape box and place the subject in a start position that comes in front of the end hole previously used as an escape hole. Allow 60 seconds to locate the escape hole.

Conduct a 6th block (a refresher block with four trails)  similar to the 5 bright light training blocks after immediate probe on day 3 only to keep the subjects motivated for the task.

After 24 hours of final bright light training trial, conduct the long term spatial memory task. Remove the escape box and place the subject in a start position that comes in front of the end hole previously used as an escape hole. Allow 60 seconds for the subject to locate the escape hole.

The Juvenile Barnes Maze is smaller than the Barnes Maze. Therefore, it allows to test spatial navigation in young rodents. Task performance is easy and requires less time. The maze does not allow water and temperature stress on the juvenile rats, unlike the Morris Maze. The presence of cushion foams allows cushioned fall that prevents injury of the subjects during task performance. The provision of large visual cues provides better visualization for juvenile subjects. The maze is efficient in measuring in-vivo electrophysiological recordings.

Barnes, C. A. (1979). Memory deficits associated with senescence: a neurophysiological and
behavioral study in the rat. J Comp Physiol Psychol 93(1): 74-104.