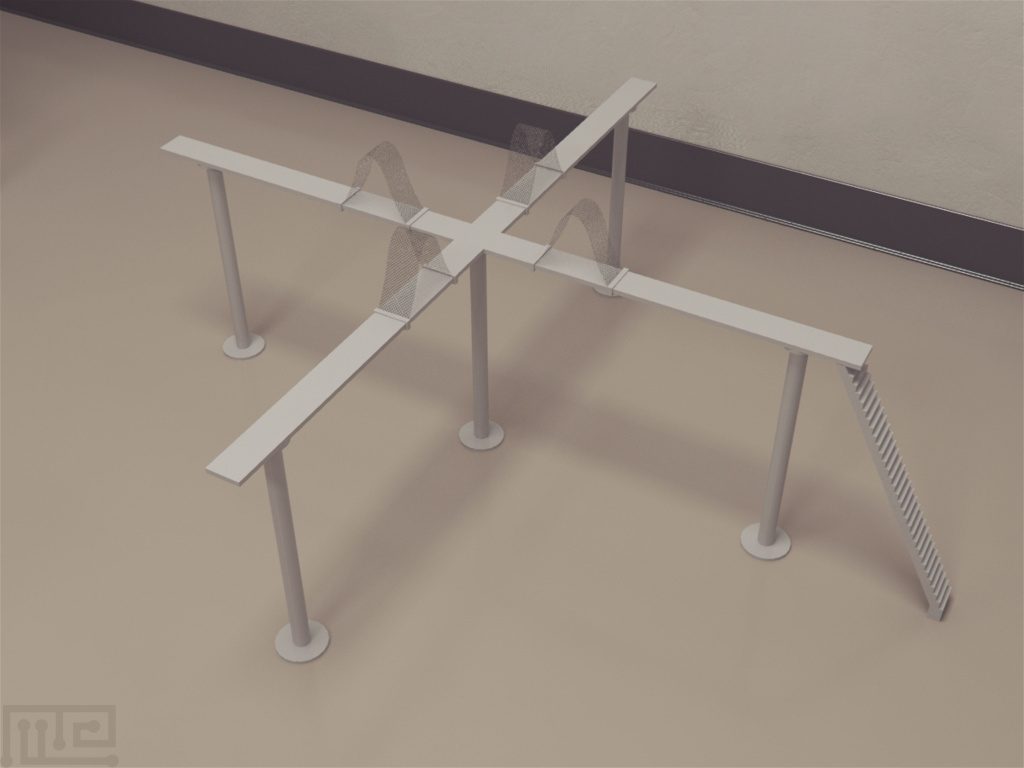 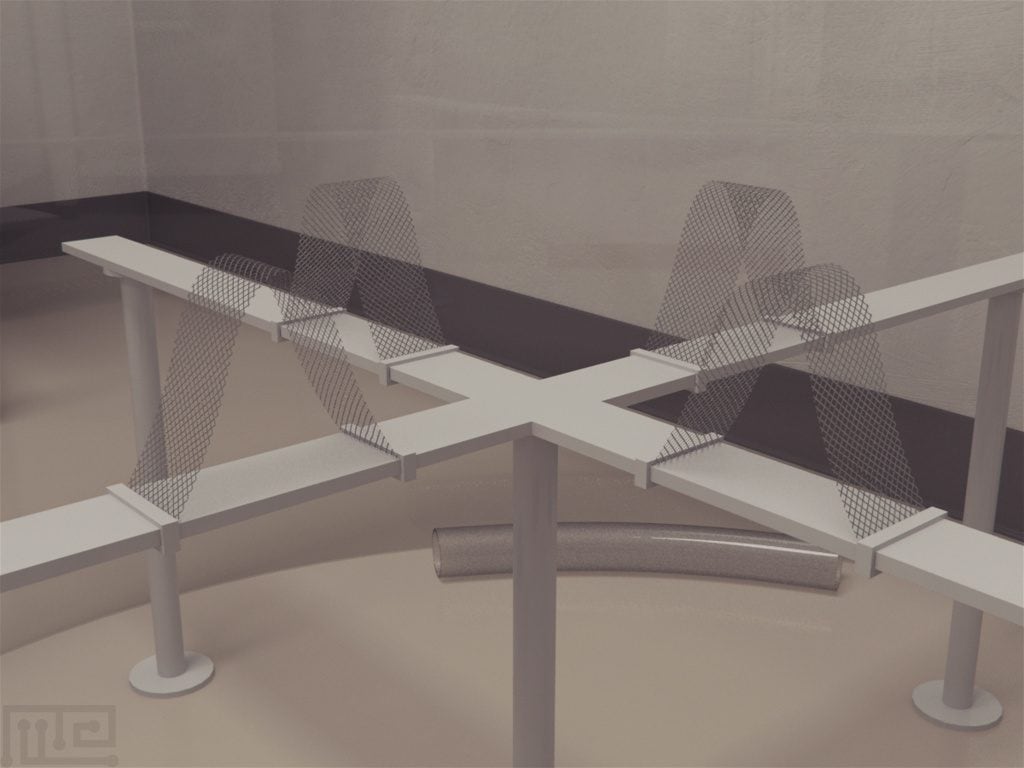 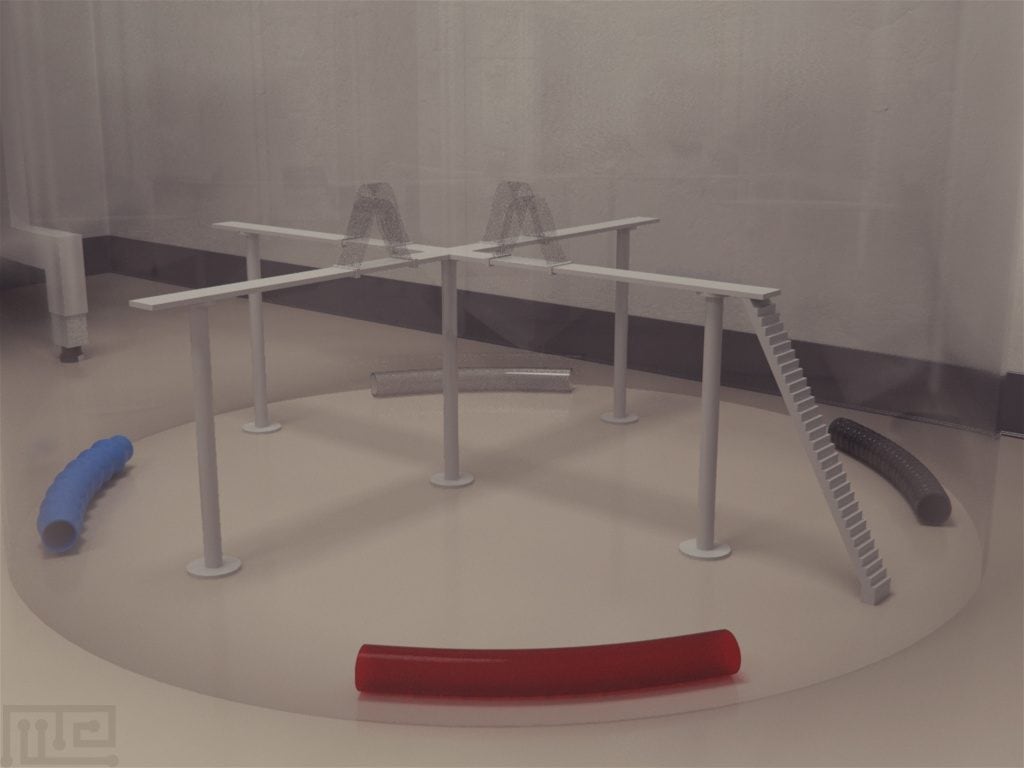 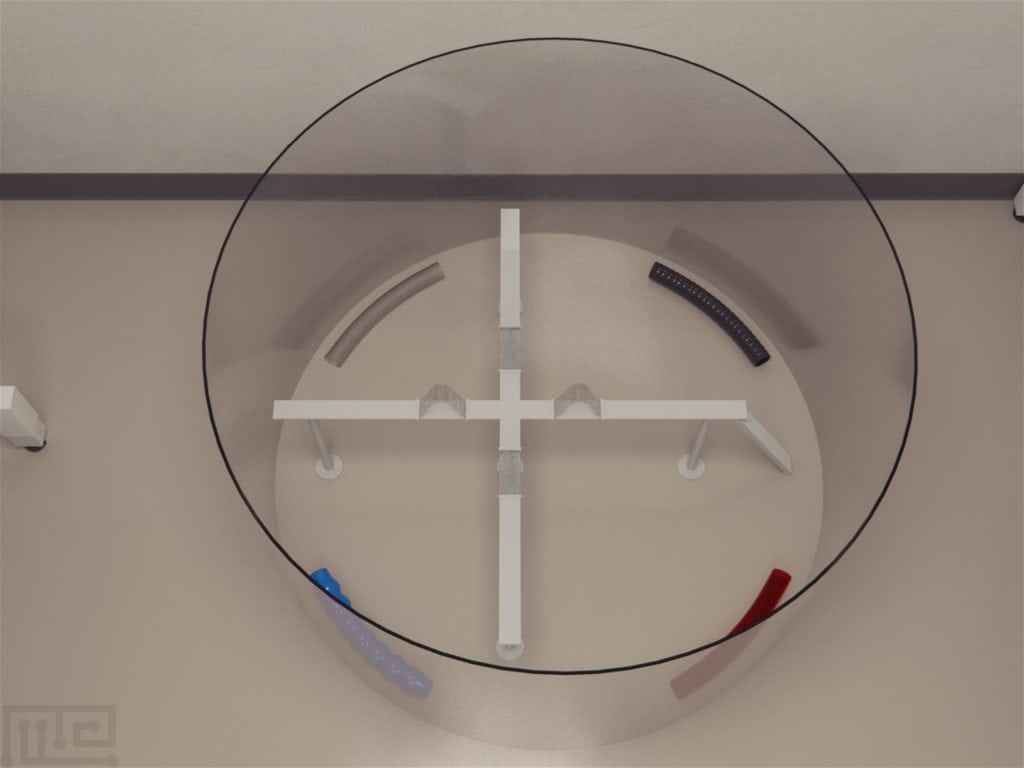 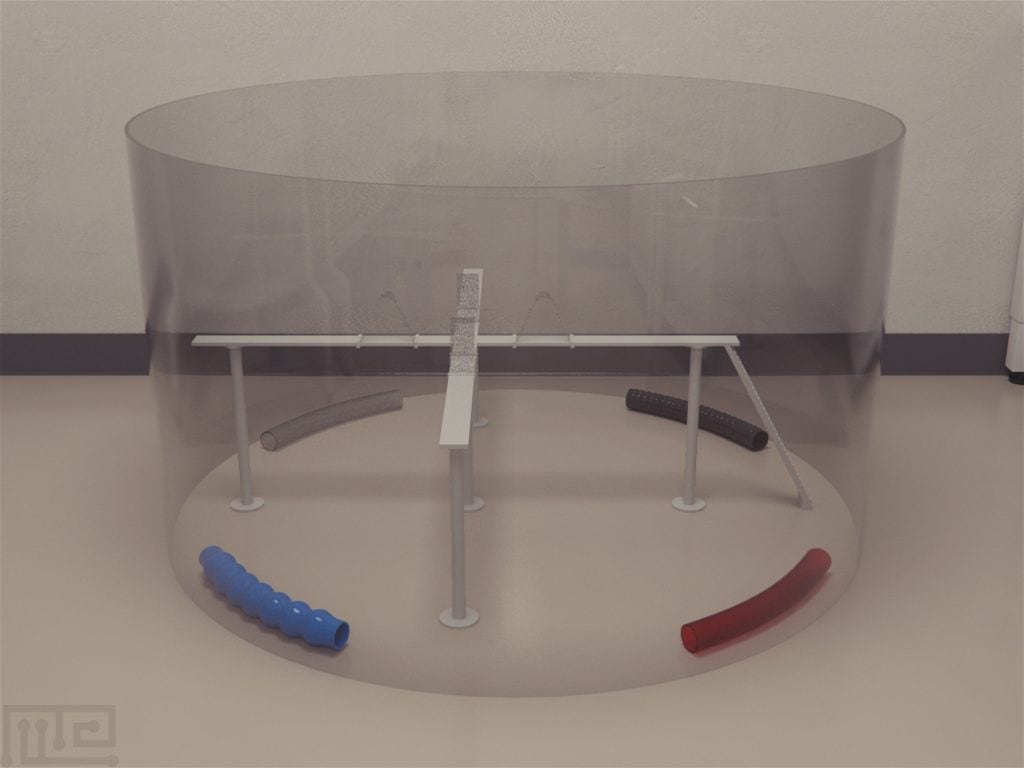 The Ladder variant of the Elevated Plus Maze was originally described by Bettis Et al (2009). In the ladder elevated plus maze, each arm comes with a wire mesh ladder that functions like a speed bump to increase the energetic cost to choosing an arm. A ladder is included on one arm to allow escape into an environmentally enriched area.

In the original protocols, a surrounding environment is included to encourage movement off of the elevated plus maze. This includes four plastic tunnels with different in color and textures (5 cm diameter × 14 cm length) and a round barrier of transparent acrylic (70 cm high, 122 cm diameter). Other environmental enrichments include artificial flowers, colored foam, a hula hoop, and hard plastic shapes.  This is not included in the base price but can be ordered separately.

Per Month
Request a Ladder Rewarded Elevated Plus Maze

The Ladder Rewarded Plus Maze consists of an elevated ‘+’ shaped maze with unwalled arms. Each arm is equipped with a wire mesh bump that the rodent must cross to reach the end of the arm. Of the four arms, one arm is equipped with an invisible ladder that leads the rodent to the unexplored area below. As a reward for finding the correct goal arm, the subject is given novel objects, such as tubing, to explore. The entire maze and the exploration area are enclosed within a barrier to prevent the subject from exiting the test area. Visual cues such as geometric shapes and plastic flowers are often attached to this barrier to be visible from the arms of the maze.

The Ladder Rewarded Plus Maze consists of an elevated plus maze with ‘speed bump’ structures. The arms are perpendicular to one another and are of the dimension 45 x 4 cm. Each arm has a U-shaped wire mesh of height 8 cm attached to it, to increase energetic cost of choosing the arm. The entire maze is at an elevation of 31 cm above the floor. The maze and the exploration area (floor) is enclosed within a 70 cm high and 122 cm diameter transparent acrylic barrier. One of the arms is attached with an invisible ladder made of latticed plastic (1 x 1 cm cubes) to allow access to the floor (exploration area).

The Ladder Rewarded Plus Maze and the exploratory area is cleaned before and after every trial to avoid unnecessary stimuli from influencing the performance of the subjects. Intra-maze cues are attached to the circular barrier in an offset position from the arm directions. Extra-maze cues are also used, which can be masked by white curtains to surround the maze area. The entire apparatus is well-lit. For tracking and recording, software such as the Noldus Ethovision XT can be used.

Pre-training for each subject is carried out to habituate to the subjects to ascending and descending the mesh ‘speed bumps’ and the ladder. Four trials, two trials familiarize with descending on ladders and two for climbing the mesh, are performed. An inter-trial interval of 20 seconds is maintained. The sample arm (equipped with the speed bump) and the ladder led to the subject’s home cage.

Training on the Ladder Rewarded Plus Maze

The arms are labeled (North, South, East, and West) for the ease of tracking and recording. The exploration area consists of tubes as a reward for the correct choice. The subjects are assigned either the East or West arms as the goal arms and are released from one of the non-goal arms chosen pseudo-randomly. Each training session consisted of 3 trials, with inter-trial interval lasting between 60 to 90 seconds. During the interval, the maze is rotated to minimize association of odor cues or symmetry imperfections with goal arm location.

When the subject chooses the correct arm by climbing to the top of the speed bump, it can descend the ladder to the exploration area. The exploration area consists of tubes that the subject is allowed to explore, as a reward, for 20 seconds (Bettis and Jacobs, 2009) . The training and testing last between 3 to 5 hours and is conducted on the same day.

Probe 1: All intra-maze cues including the tubes from the maze and the exploratory area.

Probe 2: Extra-maze cues are masked using a white curtain around the maze area.

The goal arms and start arms are counterbalanced across the trials to eliminate side-turning bias effect. The measure of performance is limited to the first choice the subject makes. (Bettis and Jacobs, 2009)

The Ladder Rewarded Plus Maze is a novel adaptation of the Elevated Plus Maze. The maze eliminates aversive conditioning and food deprivation often associated with an Elevated Plus Maze. The place learning task employed is reward based that exploits the natural tendency of rodents to explore novel environments and novel objects. The ‘speed bump’ feature on the maze arms adds an energy cost factor to arm exploration. The Ladder Rewarded Plus Maze is also a good maze to assess spatial strategies used in cognitive mapping.

The Ladder Rewarded Plus Maze can be time-consuming with each session lasting over 3 to 5 hours every day. The performance of the subjects in the maze could be influenced by the type of reward or their handling. It is important to rotate the maze between trials to avoid the influence of any odor trails or asymmetry in the maze from affecting the performance. Other factors that could potentially affect the performance include auditory and olfactory cues surrounding the test area.