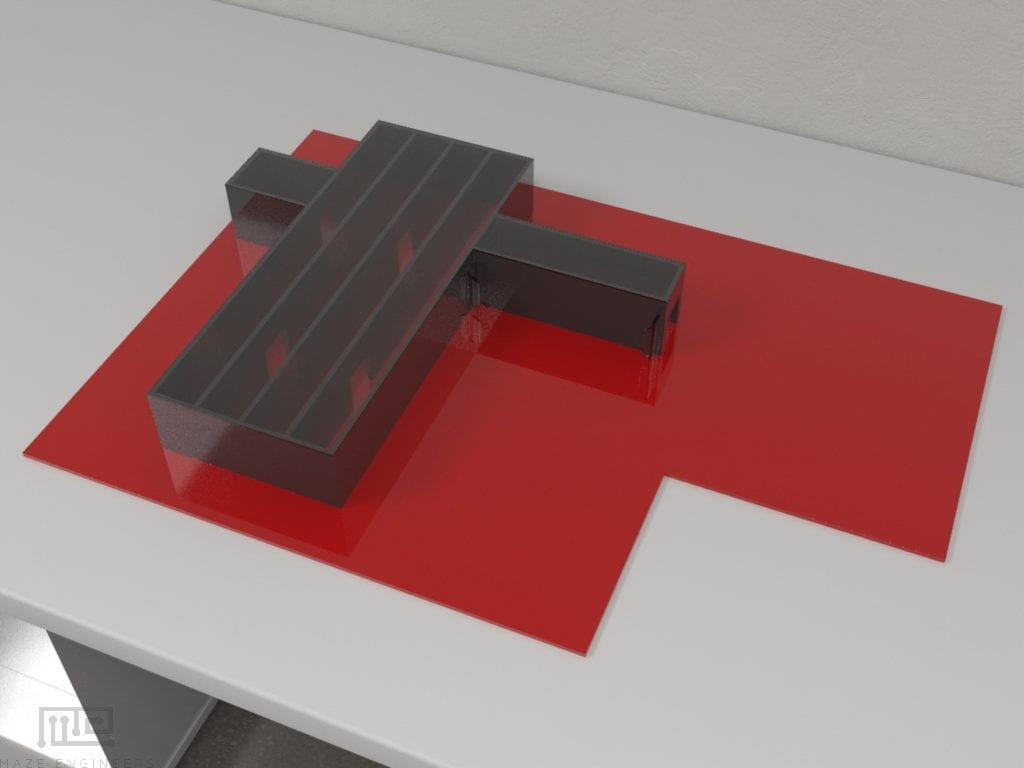 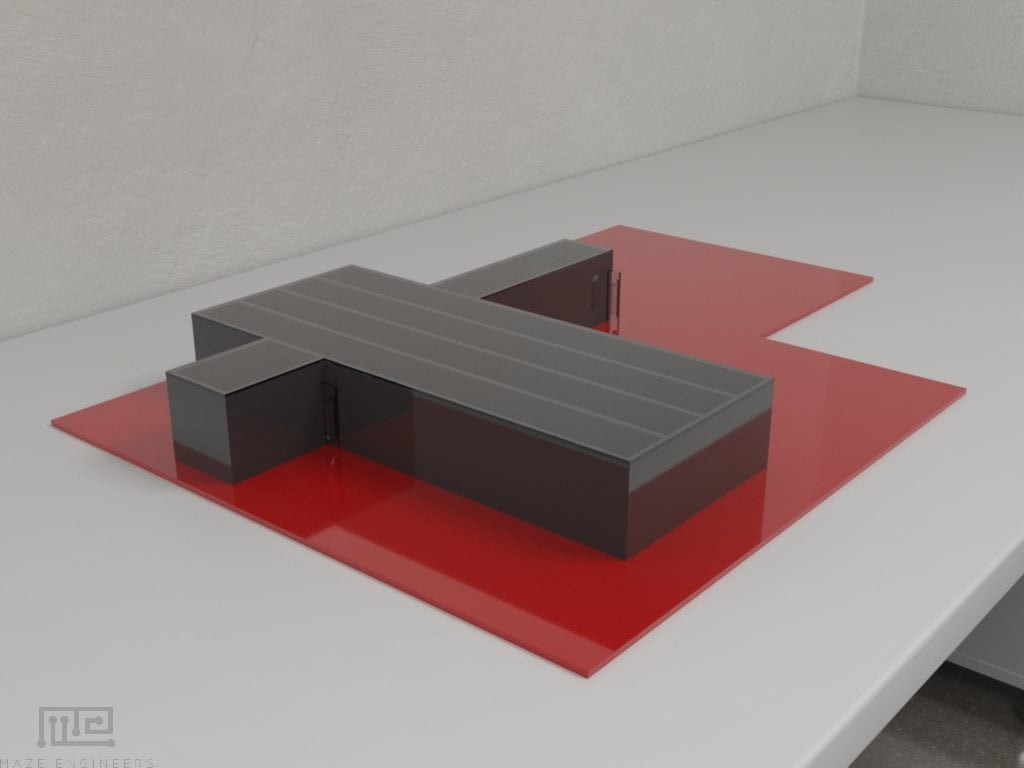 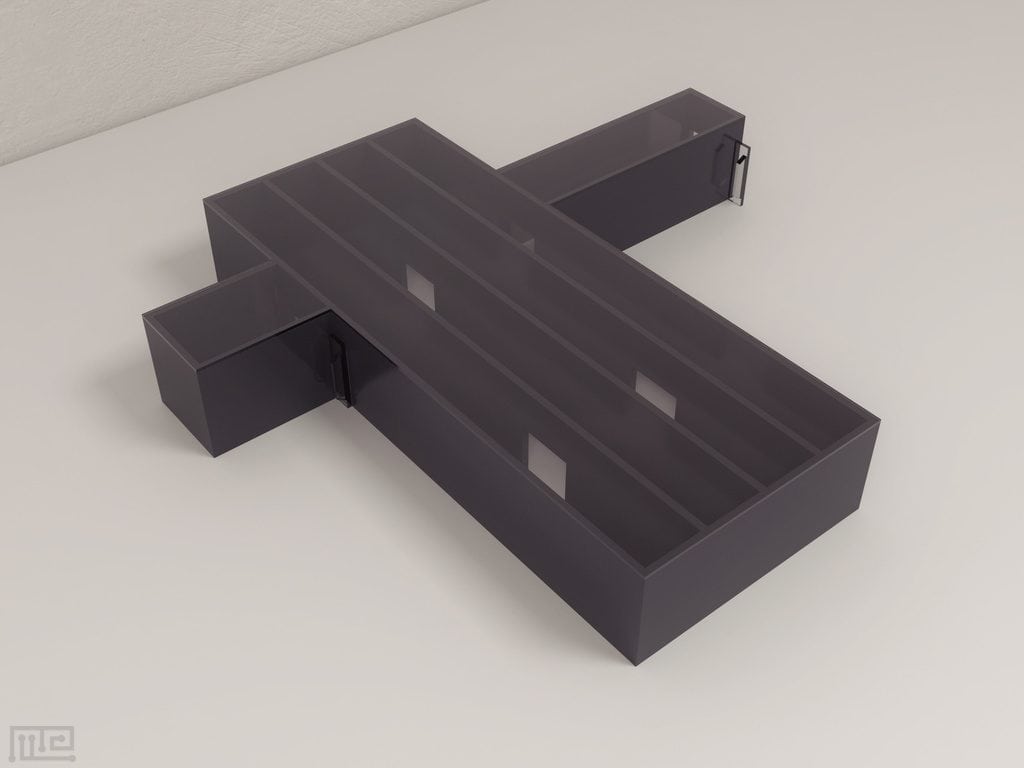 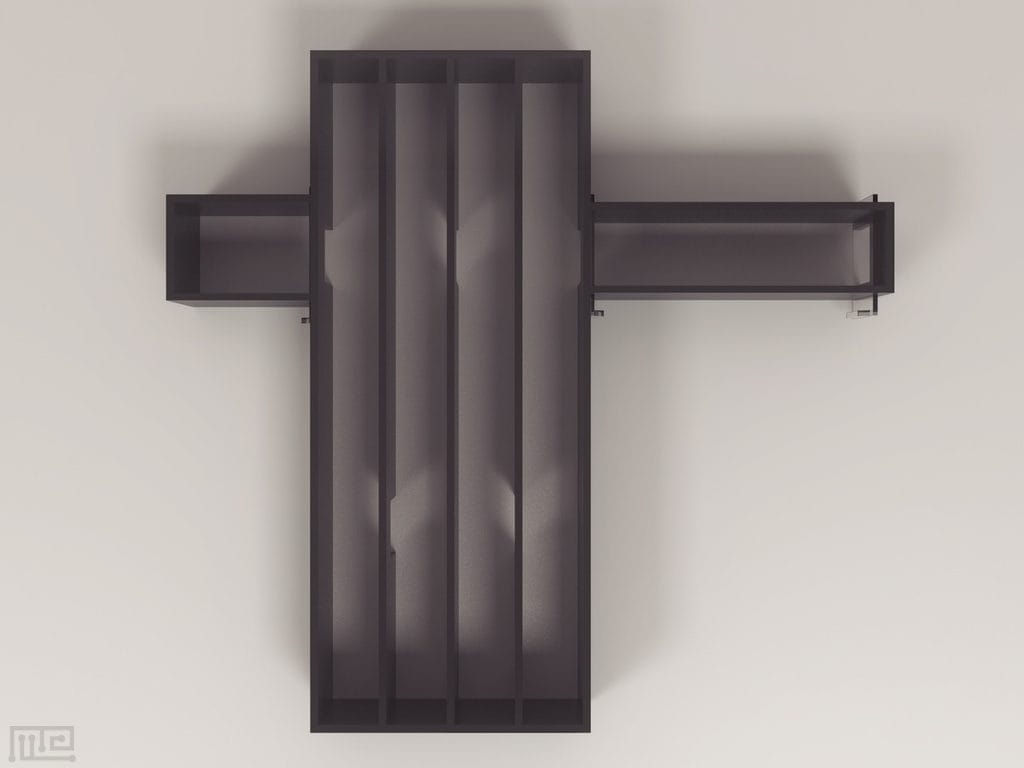 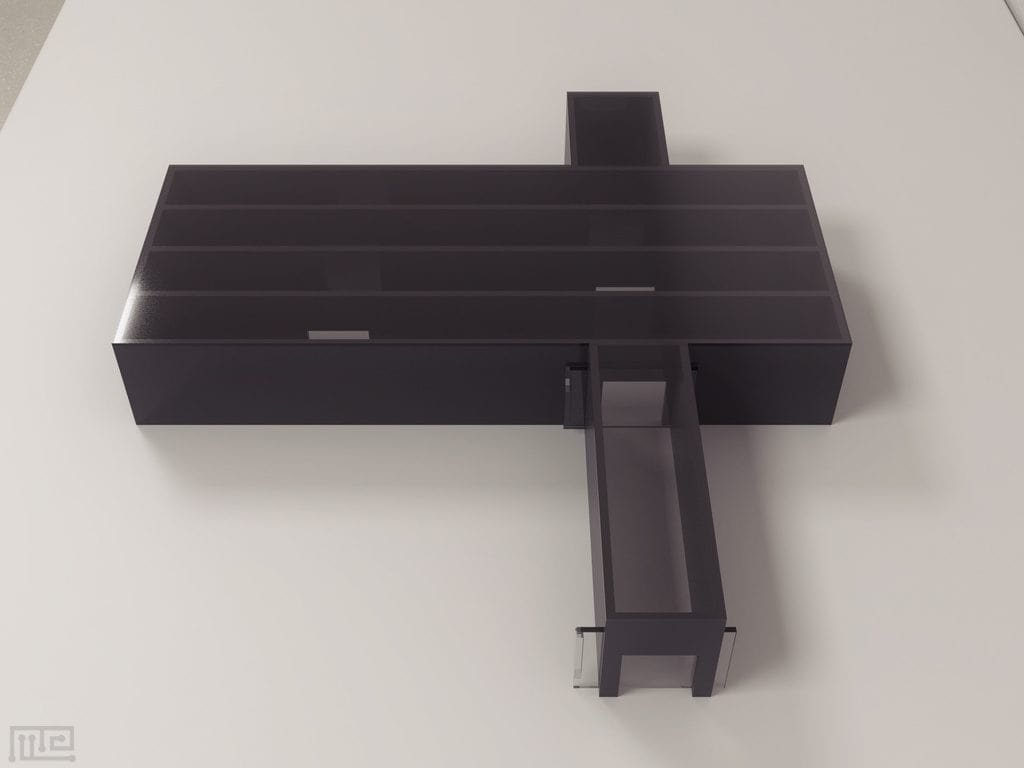 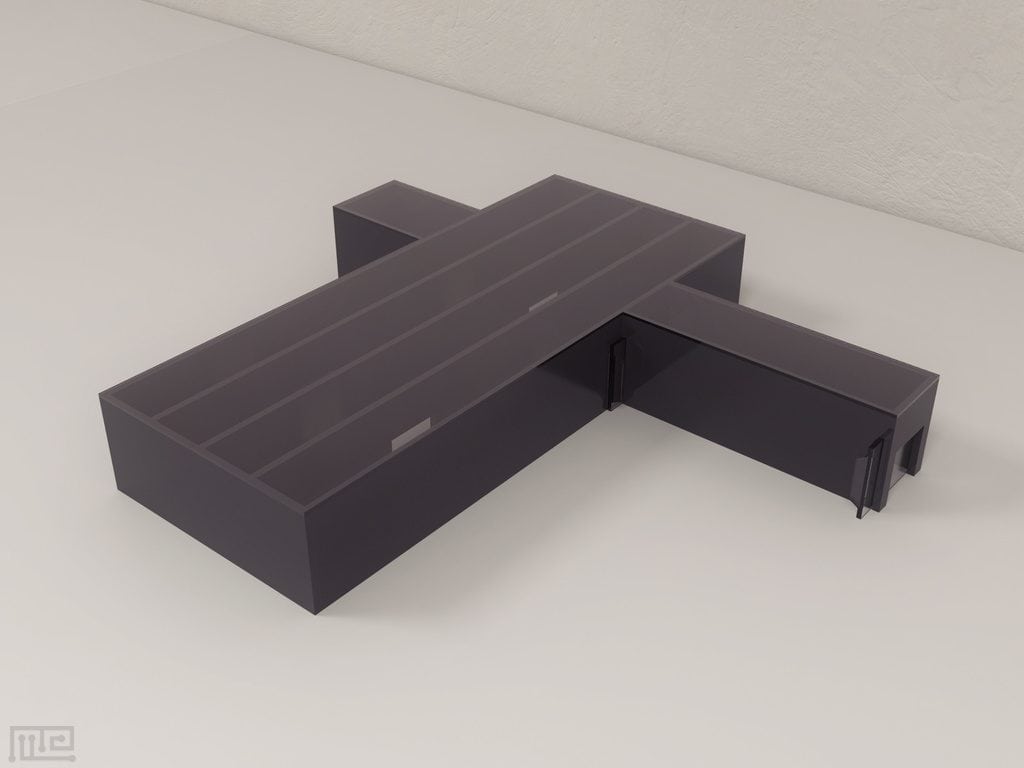 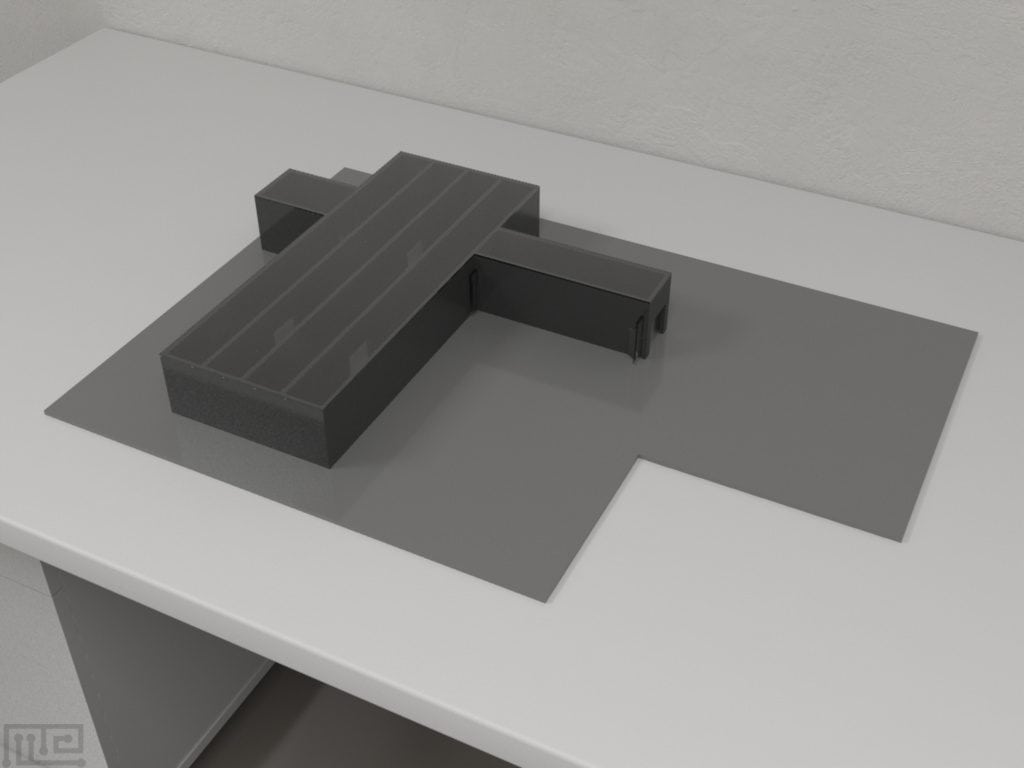 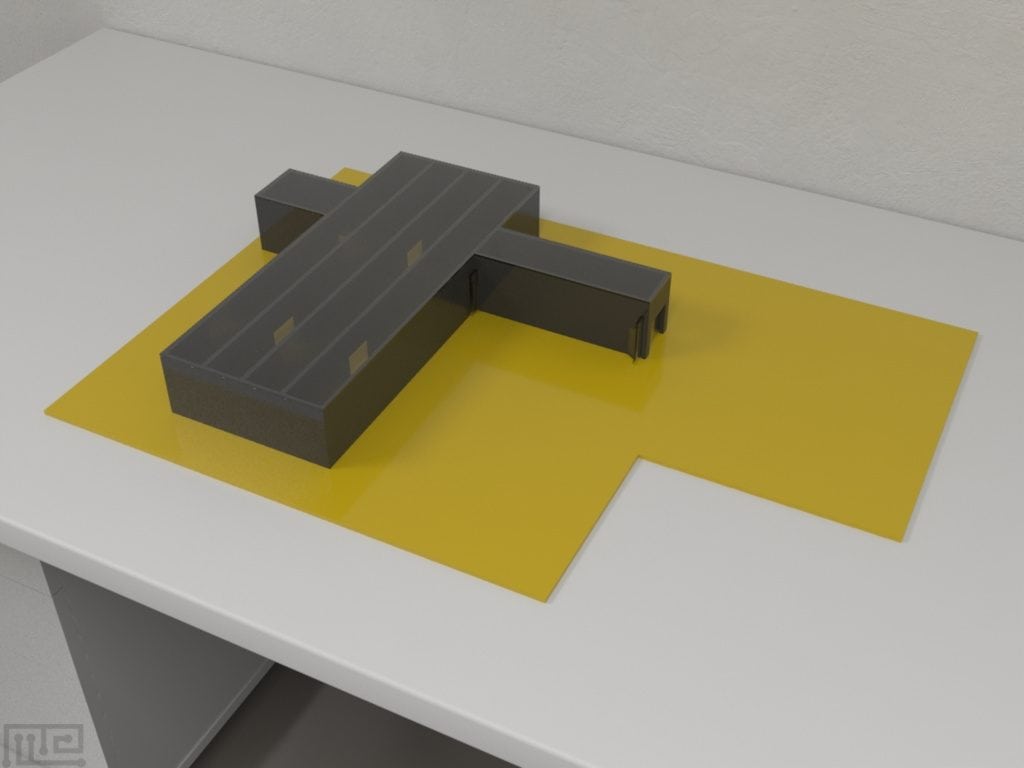 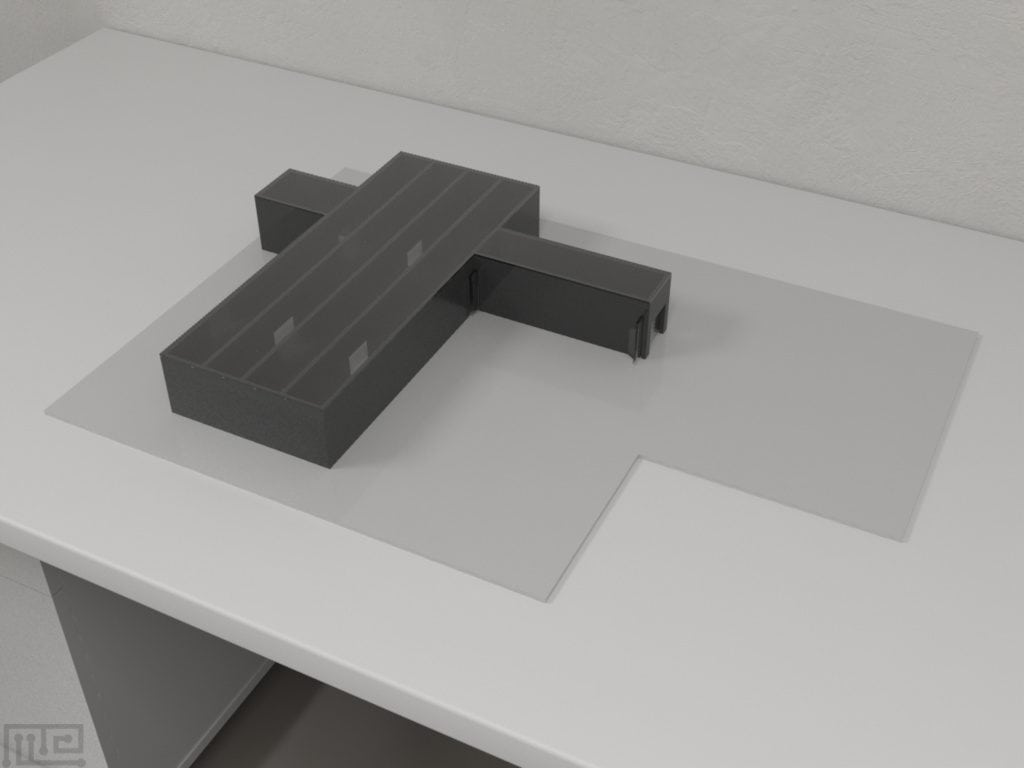 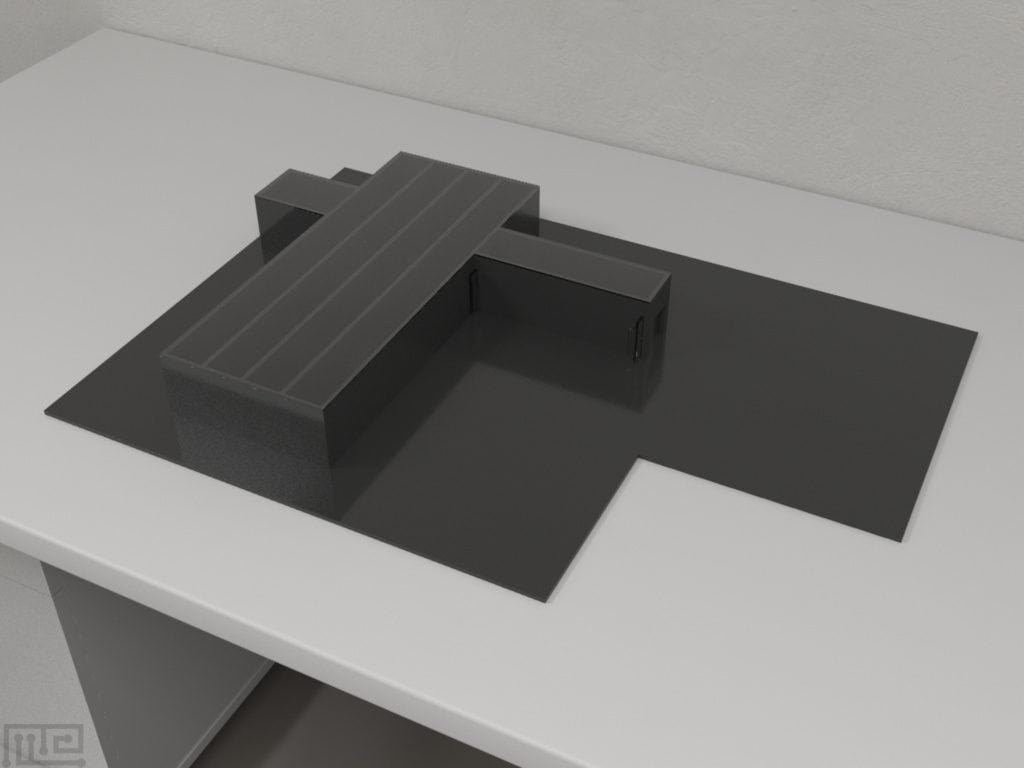 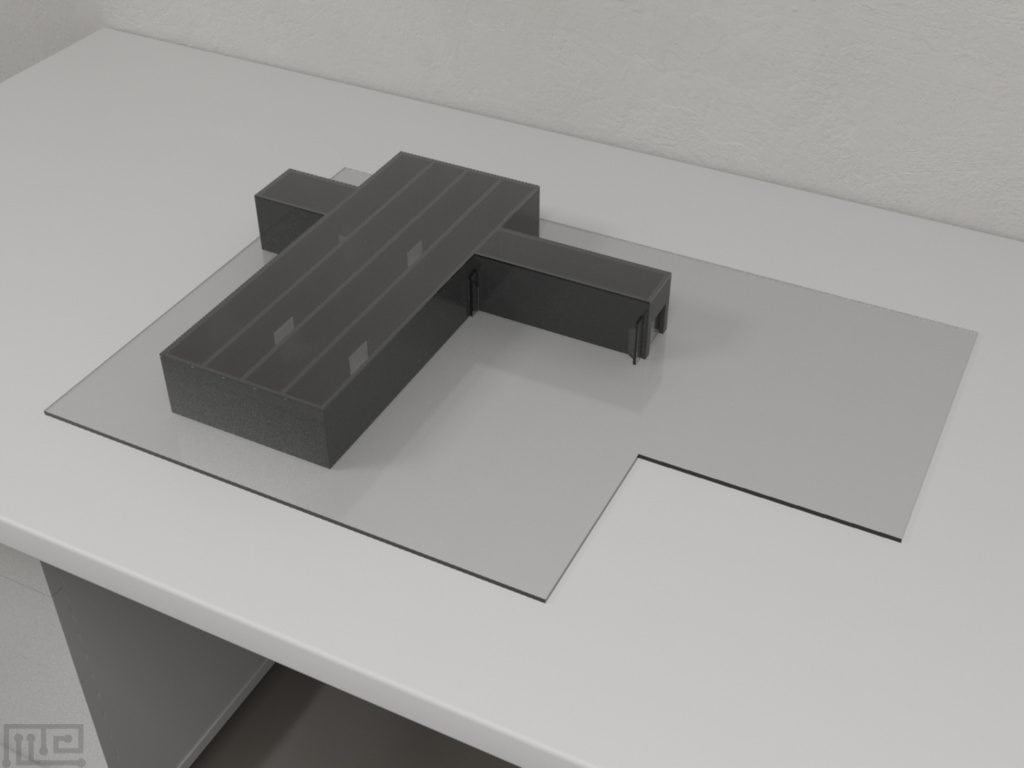 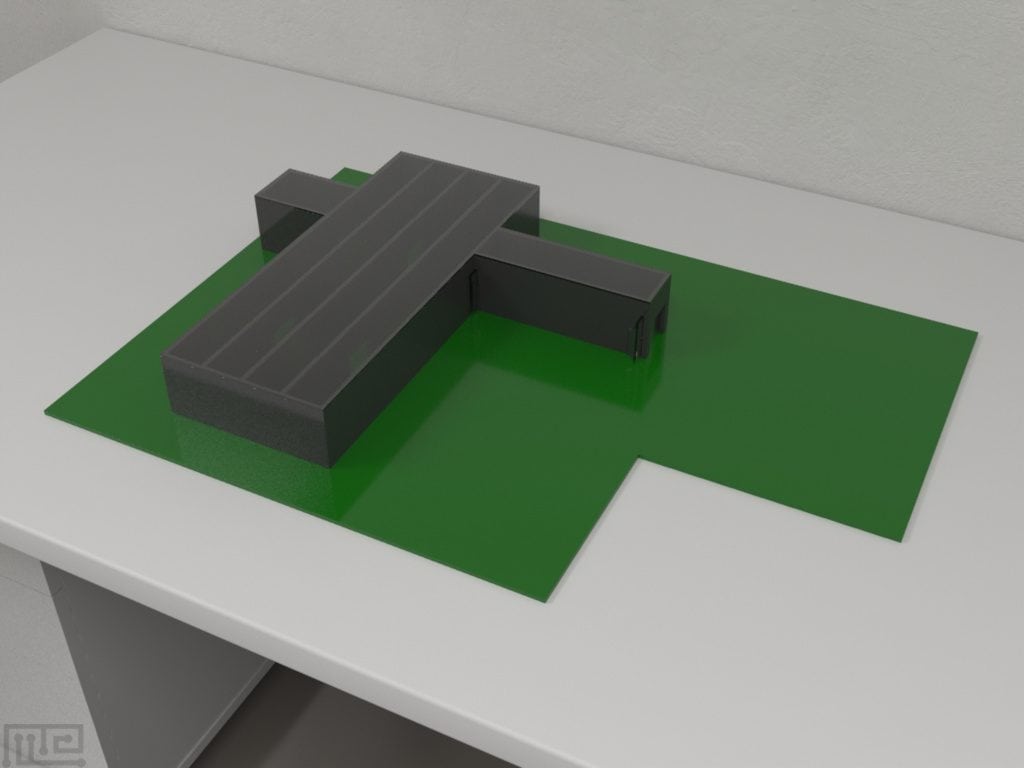 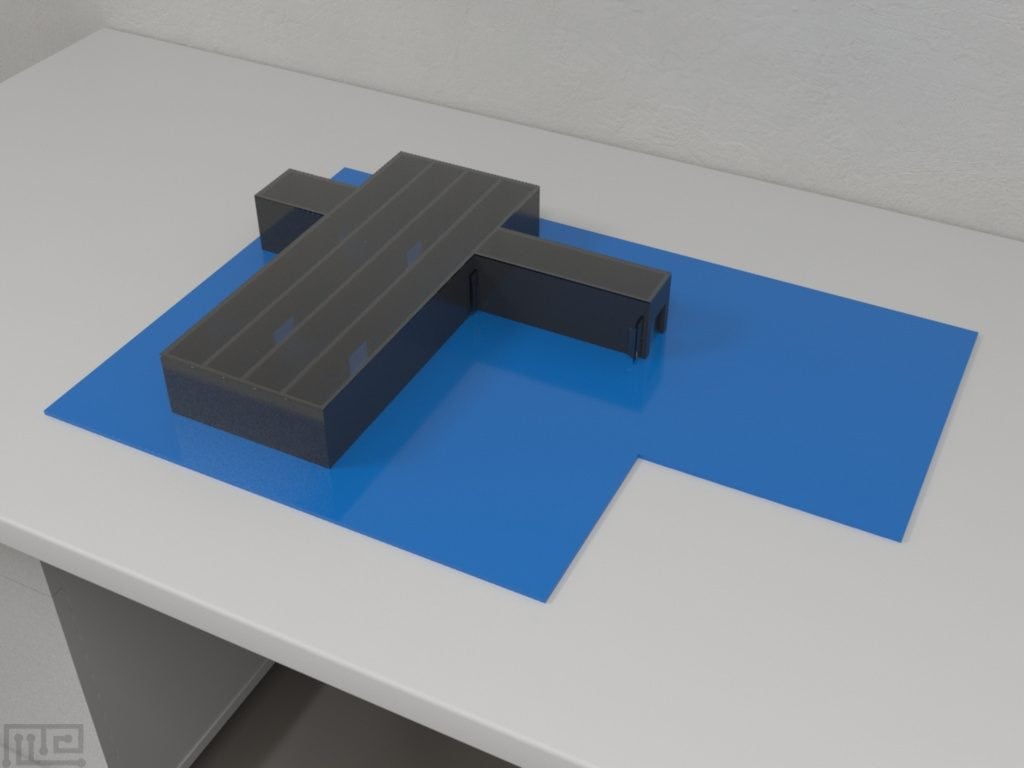 The Lashley III maze is a test used for learning and memory. It utilizes a low stress environment and looks into route learning of a maze under repeated trials. In typical protocols, no stress, food deprivation, or other stimuli are used. A start box, a maze body, and a goal box are contained in the MazeEngineers apparatus. The goal box can be filled with bedding similar to a home cage for reward for mice to motivate completion of the task. A large red base is not included in the order, but can be ordered upon request.

Lashley III is a widely used alternation task to evaluate learning ability and memory in rodents. It relies on route learning in which subjects learn to explore a maze through repeated exposure. The apparatus was developed by Karl Lashley in 1929. He utilized the apparatus to discover memory engram within the cortex using the cortical lesioning techniques. This paradigm relies on low-stress conditions such as dark phase and no aversive stimulus until the subjects reach the goal box from the start box.

The apparatus consists of an integrated start box, a four-arm maze, and a goal box. In the modified versions, there is an addition of a pseudo-home cage at the end of the goal box. This pseudo-home cage consists of the same bedding as that of the subject’s original home cage and is kept specific for each subject during the entire course of the experiment. This supplemental home cage provides ample motivation to the subjects to learn the routes in Lashley III maze (Blizard et al. 2006)

Karl Lashley conducted the protocol relying on food cues for motivation, whereas later the food cued stimuli were changed with the pseudo home cage as it provides almost the same degree of motivation. Some investigators have also utilized a food pellet reward to encourage route learning in Lashley III maze (Matzel et al. 2003).

The Lashley III maze is constructed of black acrylic covered by separate Plexiglas lids for every section to facilitate low light to simulate dark phase environment. The acrylic walls of the apparatus are non-transparent whereas the lids are transparent in nature. It consists of a start box, four maze arms with five decision points, eight blind alleys, and a goal box. However, the apparatus can also be augmented with a pseudo-home cage. The modular configuration of the apparatus not only assists in the easy cleaning of the apparatus, but it also assists to modify the apparatus as needed.

In general, the maze arms are approx. 45 cm long, 7 cm high, and 5 cm wide. The decision point doors are approx. 4 x 4 cm positioned approx. 11 cm from the outer walls of the apparatus. The start box and goal box are approx. 8 cm x 9.5 cm x 7 cm and 19.5 cm x 7 cm x 5 cm in dimensions respectively. The transparent Plexiglas lids not only allows the easy visualization of the subjects as they progress in the maze but also prevents the subjects to escape the maze. The maze usually lies on a red Plexiglas base that can hold the apparatus with the added pseudo-home cage approximately the same size as the subject’s standard home cage.

First, the maze should be thoroughly wiped with 70% ethanol solution. Initially, the doors of the start box leading to the maze arms should be kept closed. Then the subjects should be carefully placed in the start box, and the top lid is firmly secured to restrict the subjects from leaving the apparatus. Then the door leading to the maze arms should be opened, and stopwatch should be started. The pathway followed by the subject should be recorded either manually or through a video tracking software such as Noldus Ethovision XT. The latency to enter every arm, and the number of errors made should be properly documented.

Every time the subject enters the dead end or travels to the maze arm already traveled is taken as an error. These errors are referred as forward and backward errors respectively. The number of errors made by the subjects should be properly recorded. The manual recording of data is prone to human error; therefore the use of an automated video tracker such as Noldus Ethovision XT limits this problem efficiently.

Evaluation of the learning and retention domains

Evaluation of aging in rodents

The effect of aging on the learning ability of the rodents can also be evaluated in the Lashley III maze. Bressler et al. 2010 slightly modified the apparatus to evaluate the factor of age in achieving the learning criterion.

The configurational modularity of the Lashley III permits the experimenter to test different characteristics of learning retention. Once the learning criterion is achieved, the Lashley III apparatus can be rotated to make the doors and choice points opposite to where they were before. Now the subject needs to learn the new route to establish learning criterion for this configuration.

The Lashley III maze can also be modified by adding odor cues or noise stimuli that serve as an additional driving force for motivation to encourage the exploration of the maze. In order to determine the state dependent learning and memory, aversive stimuli such as restraints can also be employed.

The sample data can be visualized by comparing the time spent to achieve learning criterion in subjects with respect to age. It is evident from the graph that with the increasing age, the sensory capabilities are decreased; therefore, the older subjects spend more time to meet the learning criterion. Figure 1.

Another sample data can be visualized by comparing the retention deficit domain of anteromedial lesioned subjects with sham group. Figure 2

The most exceptional advantage of the Lashley III maze is the modular nature of the apparatus. It can be simply rotated to make the choice points and doors opposite to where they were during the first acquisition phase.

Another advantage is its ability to evaluate the effects of aging on learning and memory. Although, Morris water maze is more efficient in determining learning and memory domains, lashley III evaluates the changes in the performance of the subjects more efficiently, especially when aging factor is under consideration. Other tests usually provide confounding results in aging rodents.

The duration of the training interval can prove to be detrimental for some subjects if they are over-trained. Over-trained subjects tend to show abnormal behavior in the maze which is manifested by the increased number of errors per trial, and prolonged durations to reach the learning criterion.

Lashley, K. (1929). Brain mechanisms and intelligence: A quantitative study of injuries to the brain. University of Chicago Press, Chicago.