A test of Anxiety 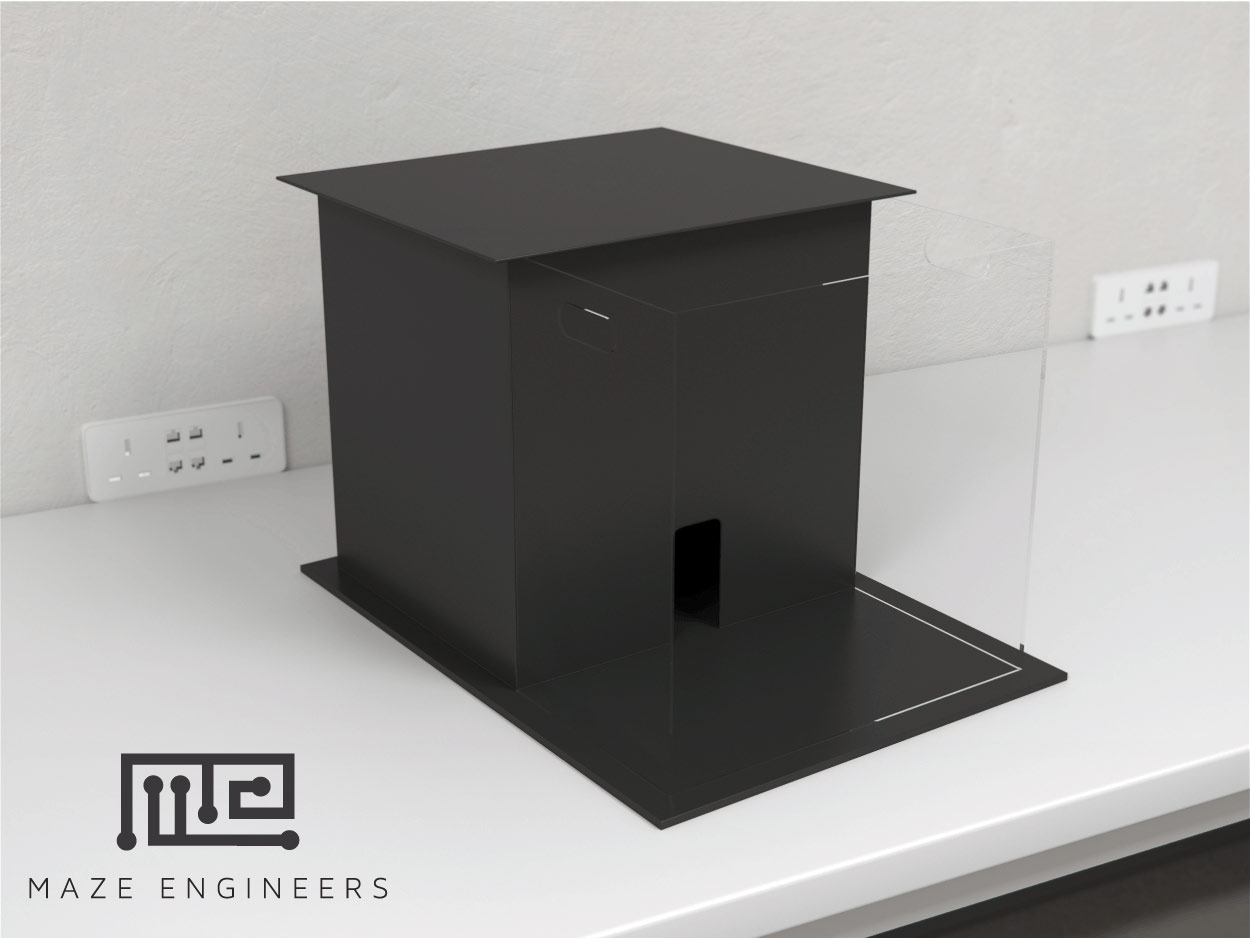 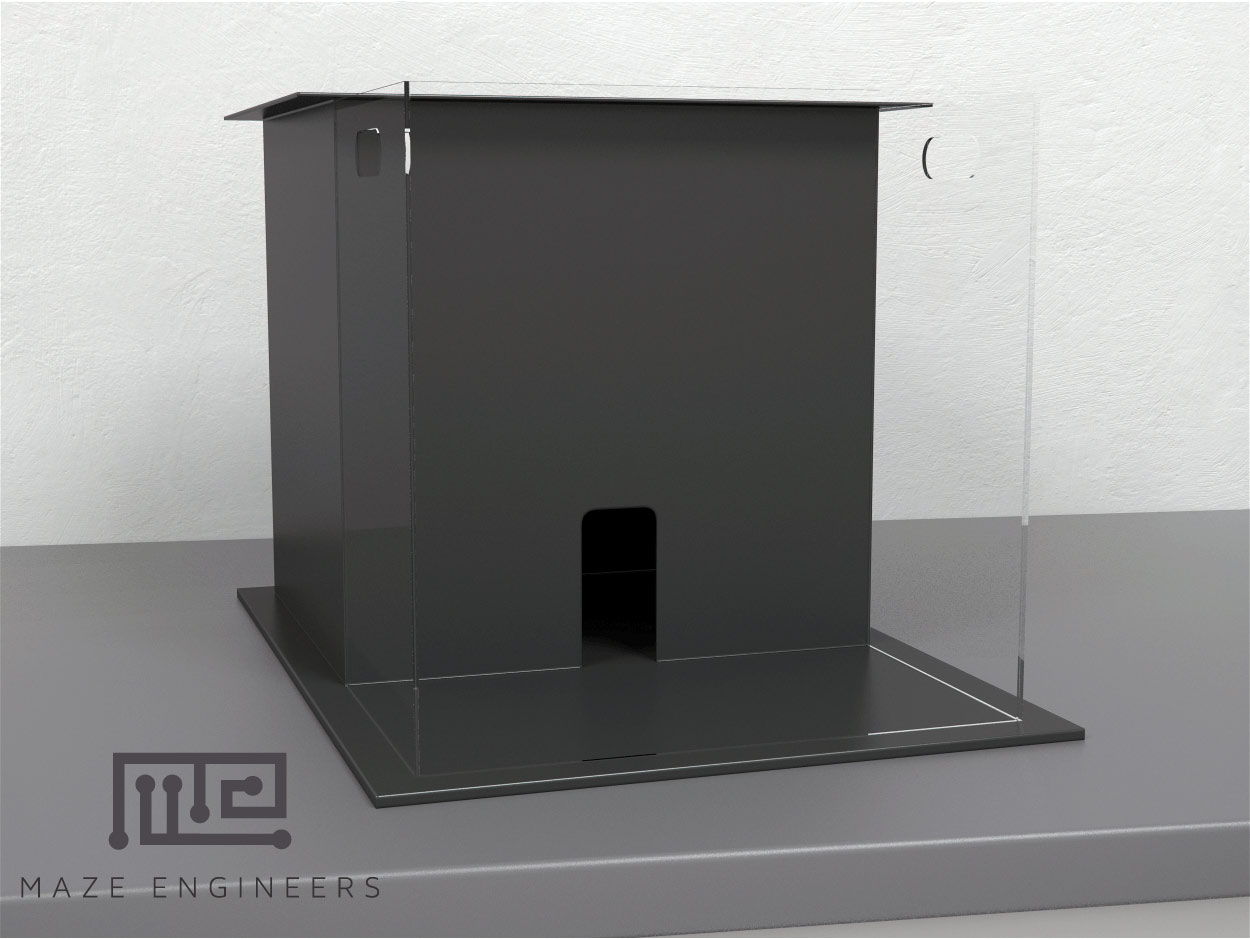 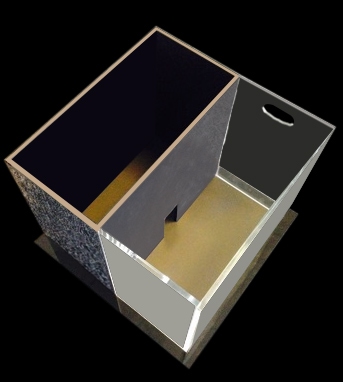 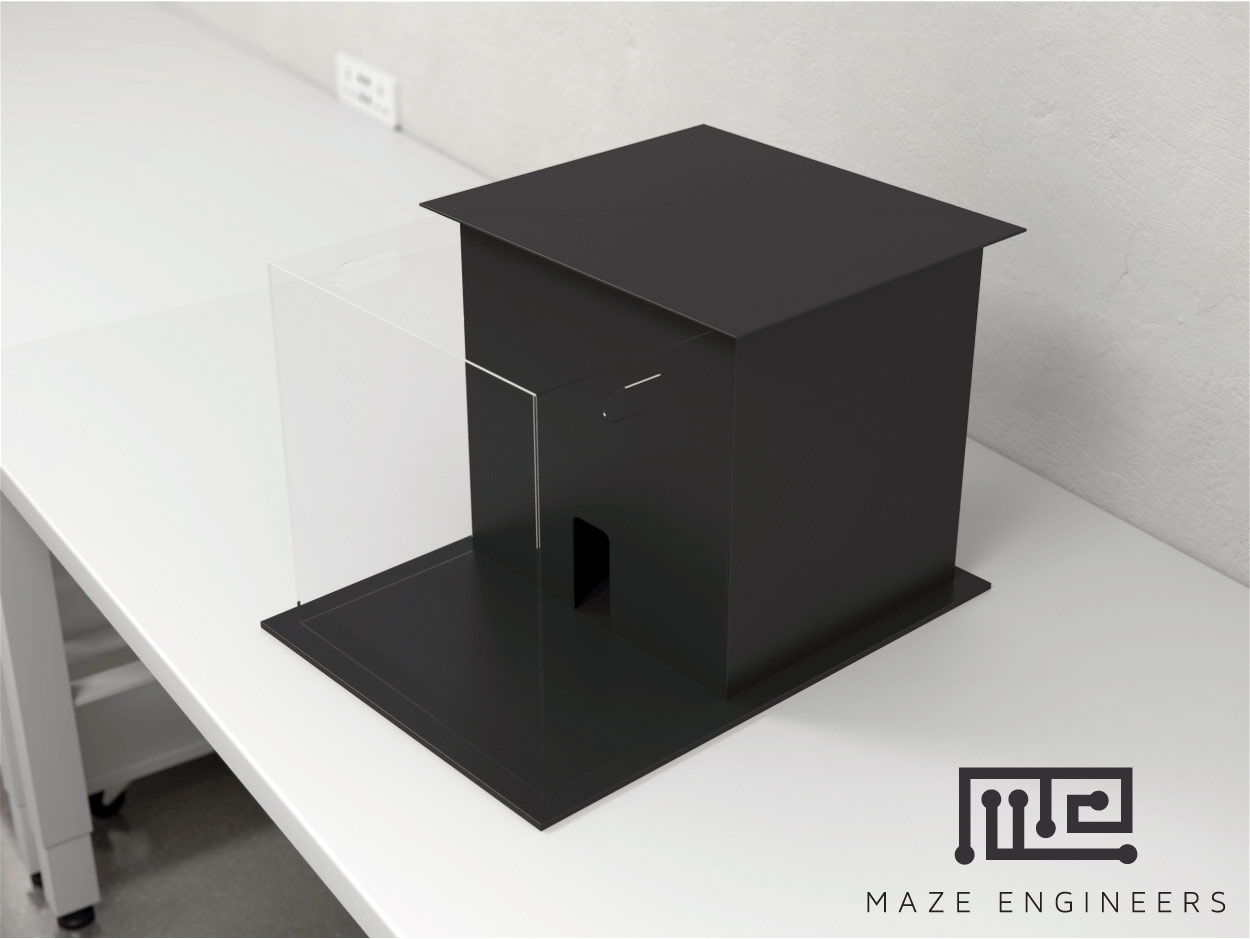 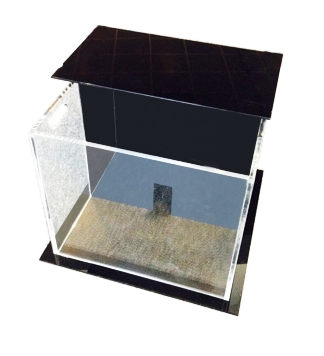 The Light/Dark box is extensively used to test anxiety-like behavior in rodents by assessing an animal’s reaction to the aversive and anxiety-prone context of being in a brightly illuminated area.

Animals in anxiety models spend less time in the bright chamber, while in comparison, animals receiving anxiolytic treatment show an increase in the time spent in the bright area.

The maze has been used to study anxiety and the effect of diseases and treatments on anxiety while different studies have adapted this apparatus in order to collect data regarding different aspects of anxiety-like behavior.

Maze Engineers offers the Light Dark Box. For customisations, please specify when asking for a quote below.

Control shock within the context of the light dark. Fit to size.
0.1-4.0mA in 0.1mA steps
DC Current.
Removable Grid

The Light/Dark Box is a widely used behavioral task in neuroscience to assess anxiety-like behavior in rodents. Anxiety is deﬁned as a negative emotional state associated with the perception of potential or ambiguous threat (Ennaceur and Chazot, 2016). The Light/Dark Box test is based on the fact that rodents have natural spontaneous exploratory behaviors in new environments, as well as an innate aversion to brightly illuminated areas. When an animal is placed in a new environment, a conflict occurs between the tendency to explore and the tendency to avoid the unfamiliar or the aversive. Its exploratory activity reflects the balance between these tendencies in new contexts and is influenced by its levels of anxiety.

The test apparatus consists of a dark black chamber and a brightly illuminated white chamber connected by a restricted opening. Animals are allowed to move freely between the two chambers.

Since rodents naturally tend to avoid the stress-inducing bright chamber, the time spent in the light is regarded as a good index of anxiety-like behavior – when their anxiety levels are higher, they tend to avoid the bright areas and spend more time in the dark chamber of the box (Crawley, 1996).

The distance traveled in each chamber, the total number of transitions between chambers, and the time spent in each chamber can be measured and are regarded   as indices of bright-space anxiety. However, it has been suggested that the most consistent and useful measurement is the time spent in the bright chamber, since this parameter provides the most consistent dose-effect results in pharmacological evaluations (Hascoët and Bourin, 1998).

The light/dark transition test was originally described in 1980 by Crawley and Goodwin (Crawley and Goodwin, 1980). Since then, it has become one of the most widely used tests to measure anxiety-like behavior in mice (Ennaceur and Chazot, 2016).

The apparatus used for the Light/Dark Box test consists of a cage divided into two chambers divided by a partition with a door. One chamber is brightly illuminated with a lamp, whereas the other chamber is dark. The size of the box can vary depending on the animal to be tested. The relative size of each chamber is also variable; the most commonly used proportions found in the literature are either equally sized chambers, or 1/3 dark 2/3 light areas.

The box can be monitored by infrared beams and by the Noldus EthoVision® XT video tracking system.

The purpose of the light/dark transition test is to assess anxiety-like behavior in rodents in a control vs. disease model/intervention group, by assessing their spontaneous exploratory behavior in new environments, as well as their aversion to brightly illuminated areas.

Typically, when placed in a new environment, rodents will tend to explore it, but they will also tend to avoid aversive contexts, such as a brightly illuminated area. Their exploratory activity will reflect the balance between these tendencies and will be influenced by their levels of anxiety. Therefore, the latency to first enter the light chamber, the distance traveled in each chamber, the total number of transitions between chambers, and the time spent in the each chamber are recorded. A decrease in exploratory behaviors and in the time spent in the bright chamber will be indicative of anxiety.

There are several versions of protocols to be used with the Light/Dark Box, varying mainly in the initial placement of the animals and in the duration of the test.

Pre-training for the Light/Dark Box

Since this test is used to assess anxiety-like behavior, all anxiety-inducing variables should be controlled. Therefore, the animals are ideally kept on the same facilities were the test will take place for at least a week before the beginning of the test, so that they become habituated to the environment of the testing facilities. Animals should be kept in those same facilities throughout the whole experimental period.

Animals should also be habituated to the experimental room for at least 30 min before the beginning of the test.

The test should be conducted in a soundproof experimental room after 30 min of habituation to the room. After the habituation period, the animal is placed in the box. Animals can be placed either in the middle of the lit chamber (Costall et al 1989; Holmes et al. 2003) or of the dark chamber (Heredia t al. 2014; Müller et al. 2003; Oitzl et al. 2001).

Since the latency to enter the light chamber can be used as index of anxiety-like behavior, a door between the chambers can be used so that the animals do not enter the light chamber immediately due to their motivation to escape from the experimenter (Takao and Miyakawa, 2006). In this case, animals are placed in the dark chamber of the Light/Dark Box and the door opens automatically 3 seconds after the mouse is detected by an infrared camera that monitors the dark chamber.

After their placement in the chamber (or after the door opens), mice are allowed to move freely between the two chambers with the door open for 10 min. The latency to first enter the light chamber, the distance traveled in each chamber, the total number of transitions between chambers, and the time spent in the each chamber can be recorded.

The box can be monitored by the Noldus EthoVision® XT video tracking system. This software allows the automatic recording of the animal’s activity and movements, including the number of entries in each chamber, the time spent in each chamber, and the distance travelled in each chamber.

After each trial, all chambers should be cleaned such as to prevent a bias based on olfactory cues.

In the original version of the Light/Dark Box test, as described by Crawley and Goodwin in 1980, mice were allowed to run free in a two-chambered arena, where two-thirds were illuminated and one-third was darkened. The two chambers were separated by a partition equipped with photocells, and the entire box rested on an activity monitor. Transitions between the light and dark chambers and total locomotor activity, as an indication of exploratory activity, were measured for 10 min. The original version also had no ceiling and the walls of the light chamber were transparent (Crawley and Goodwin, 1980). This, along with the larger area of the bright chamber, allowed for the simultaneous detection of bright-space and open-space anxiety.

Since then, many authors have used it with several modifications (Bourin and Hascoët, 2003), namely in the duration of the test, the relative size of each chamber, and the material of the light chamber.

Using opaque white plastic for the ceiling and walls of the light chamber, as well as two equally sized chambers, can make the Light/Dark Box test more specialized for measuring bright-space anxiety. (Takao and Miyakawa, 2006).

The data obtained from the Light/Dark Box test is generally visualized by graphing the time the animal spends either in the dark or in the in the light chamber. The time spent in the light chamber can be easily graphed and compared across the control and disease or intervention groups.

The latency to first enter the light chamber, the distance traveled in each chamber, and the total number of transitions between chambers can also be presented. However, since the time spent in the bright chamber is regarded as the most consistent and useful measurement in dose-effect pharmacological evaluations (Hascoët and Bourin, 1998), we present that measurement in the example graph on the right

Anxiety may manifest itself in different ways. In the Light/Dark Box test, using opaque walls and ceiling and equally sized chambers can make it is more specialized for detecting bright-space anxiety; using transparent walls and a larger bright chamber will include an open-space anxiety-like behavioral component. Other manifestations of anxiety may be better determined by other tests. Open-space anxiety-like behavior, for example, can be assessed using the Elevated Plus Maze test.

Differences in procedures between laboratories can make it difficult to replicate or compare results. It has been shown that even when the apparatus, test protocols, and environmental variables are rigorously standardized, systematic differences in behavior can occur across different laboratories.  Nevertheless, within the same laboratory, a strict standardization of those variables can render the test sensitive enough to detected behavioral differences between strains (Crabbe et al., 1999).