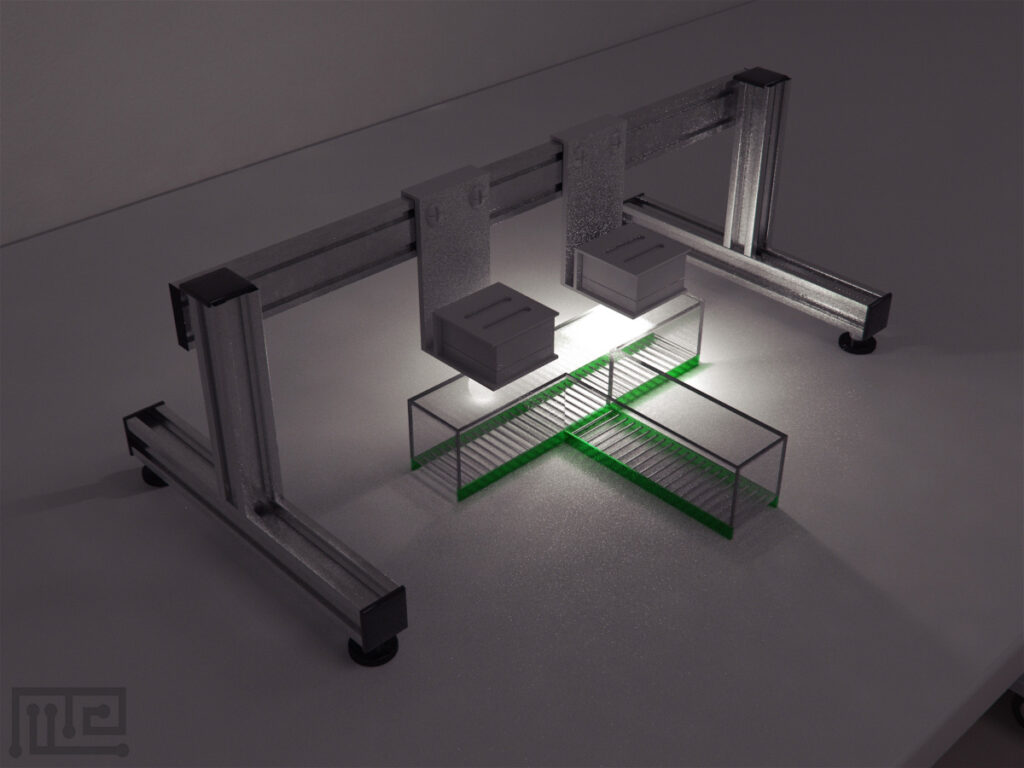 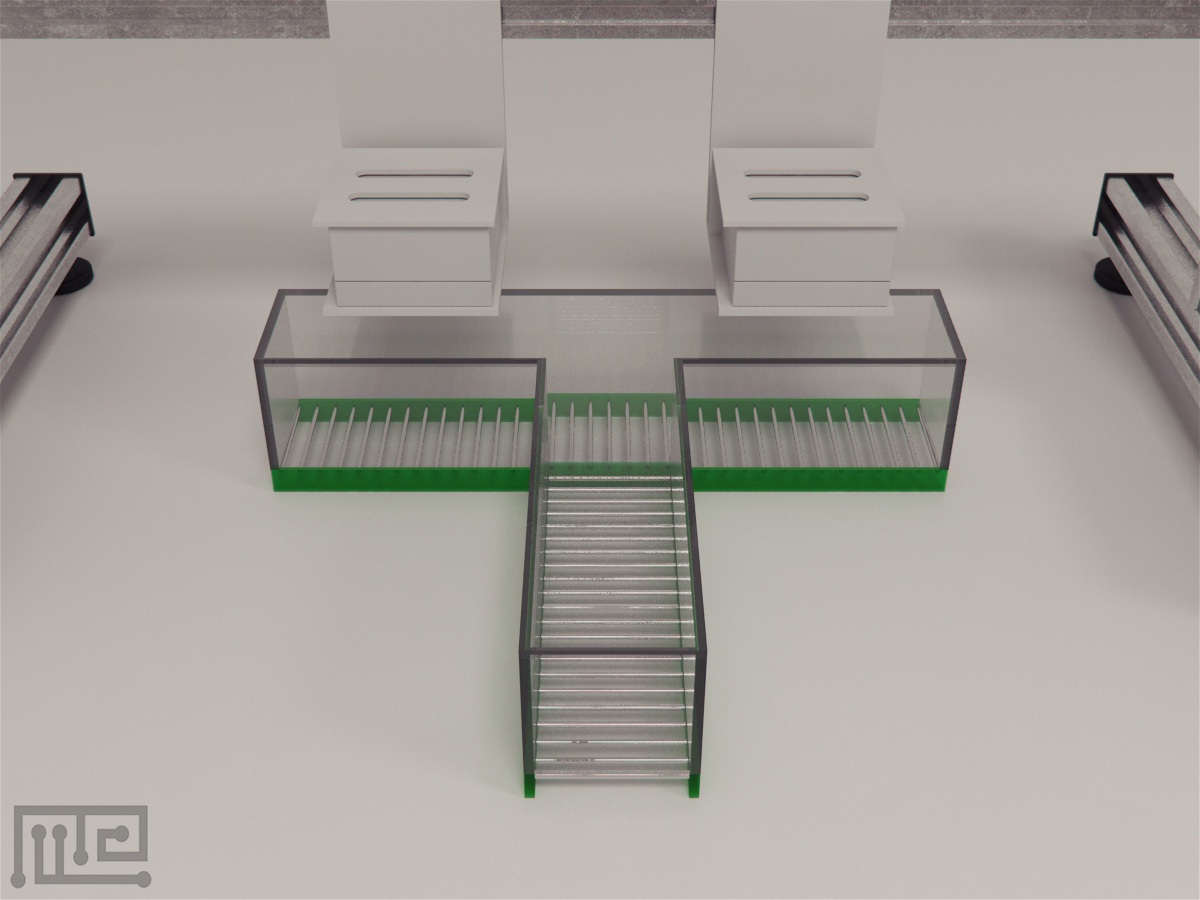 The Light Dark T-Maze was used by Patrice Venault et al. (2006), to assess the differences in the learning abilities of two strains of mice which were selected, one for sensitivity (BS), and one for resistance (BR) to a convulsive dose of Methyl–carboline-3-carboxylate (-CCM).

The learning task required discrimination between lit and a dark arm in the T-maze which consists of a long start arm and two arms to choose from. The walls and ceiling of the maze were made of transparent plastic. The floor was a metallic grid and could be electrified. Each of the three arms could be electrified separately.

Mazeengineers offers the Light Dark T-Maze for both mice and rats. Custom coloring and customization are available upon request.

The Light/Dark T-maze is used to study learning and memory behaviors in rodents. The maze is a variation of the conventional T-maze, in which either or both the choice arms can be lit-up. In addition to the bright light feature, the maze also incorporates a metallic grid flooring that can separately electrify each arm, including the start arm. Essentially, the Light/Dark T-maze combines the T-maze learning task with the anxiety assessment protocol applied in the Light-Dark box.

Rodents tend to prefer dark, enclosed spaces over brightly lit spaces though they are curious explorers. The Light/Dark T-maze challenges these preferences by providing the subject with a lit and a dark choice arm. The subject is trained to choose an arm by using foot shocks, thus allowing the subject to learn an association between the incorrect arm and the aversive stimuli. Learning deficits reveal themselves as poor ability to learn the aversive stimulus association with the wrong arm in the Light/Dark T-maze. Subjects with learning and memory impairment would show a slower learning curve and overall increased escape time.

The maze can also be extended to evaluate the effectiveness of anxiety-related treatments by providing a conflict to choose the lit arm of the maze. Additionally, the Light/Dark T-maze also provides the opportunity to test the effects of drugs, brain lesions, and diseases and disorders on learning, memory, and anxiety-like behaviors. Other similar apparatuses used in the evaluation of learning, memory, and anxious behaviors in rodents include the Circular Light-Dark box, the Elevated plus maze, and the Elevated Zero maze.

The Light/Dark T-maze is a ‘T’ shaped maze containing 4.5 cm x 4.5 cm metallic grid sections that can electrify the three arms separately. The maze has a long departure alley, which is 15 cm long and two choice alleys that each measure 10 cm in length. A 25-W electric bulb is present on the ceiling of the two choice arms.

Clean the apparatus thoroughly before starting the trial. A tracking and recording system such as the Noldus Ethovision XT can be used to assist with observations.

Evaluation of strain-related difference in memory processing abilities of mice

Venault, Beracochea, Valleau, Joubert, and Chapouthier (2006) investigated the difference in memory processes in two strains of mice that were either sensitive (BS) or resistant (BR) to a convulsive dose of Methyl- β -carboline-3-carboxylate (β-CCM). In addition to the Light/Dark T-Maze, the learning behaviors of mice were also evaluated in the 8-arm radial maze and the 4 hole board apparatus (see Hole Board apparatus). In the Light/Dark T-maze, wherein the mice were trained to choose the dark arm, the BR mice were observed to make more mistakes than the BS mice and showed a slower learning curve. Further, the BS mice made fewer errors than the BR mice in both the radial arm maze and the 4-hole board task. Overall, the BR strain was more anxious than the BS strain, and the observed performances suggested strain selection based on β-CCM sensitivity resulted in memory processing differences.

Raffalli-Sebille, Chapouthier, Venault, and Dodd (1998) investigated the effect of Methyl- β -carboline-3-carboxylate (β-CCM) on the performances of Swiss male mice in the Light/Dark T-maze. The experiments involved two sets of treatments either with only one drug (β-CCM or diazepam) or a combination (β -CCM and Ro 15-1788, β -CCM and vehicle of Ro 15-1788, Ro15-1788 and vehicle of β -CCM, or both vehicles) administered 10 minutes prior to testing (first 3 sessions only). Since the mice had a preference for the lit arm, they were trained to choose the dark arm of the maze. As opposed to diazepam that impaired performances, β -CCM was seen to improve learning both during the sessions with the drug treatment (first three sessions) and sessions without the drug treatment (last three sessions). Further, it was observed that Ro 15-1788 alone also led to performance improvements. However, simultaneous administration led to the suppression of the positive effects on β-CCM on the maze performances.

The following parameters can be observed using the Light/Dark T-maze:

The Light/Dark T-maze is used to test learning and memory associated with anxiety-like behaviors in rodents. The bright light feature of the maze can be used to study bright-space anxiety in rodents. The shock grids offer the opportunity to apply associative learning protocols. The maze can be easily adapted for different investigatory needs using simple modifications such as guillotine doors or using different protocols. The maze can also be used for drug testing and treatment evaluation for different diseases and disorders affecting learning and memory. Assessment of learning and memory behaviors resulting from brain lesions and pharmacological manipulations can also be evaluated in the apparatus. The Light/Dark T-maze allows for easy acquisition of data.