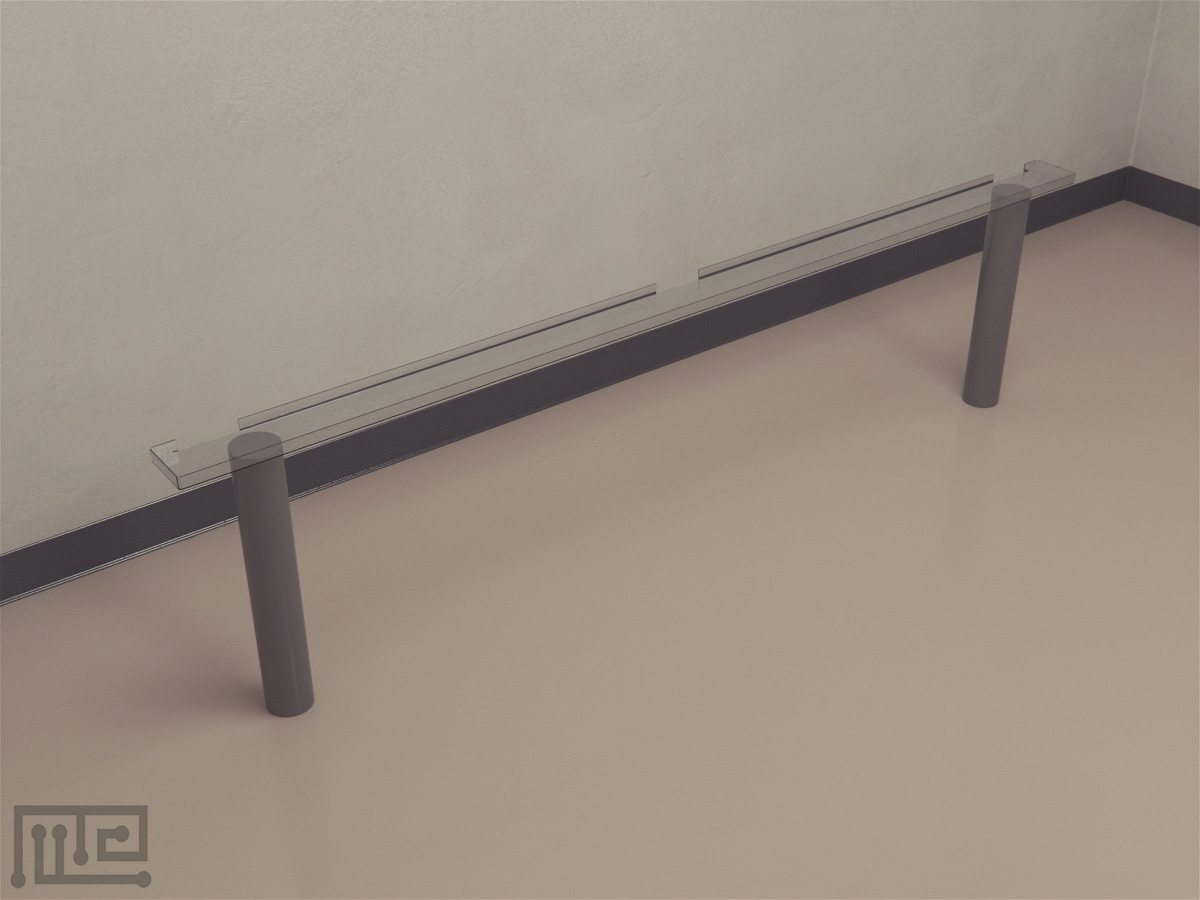 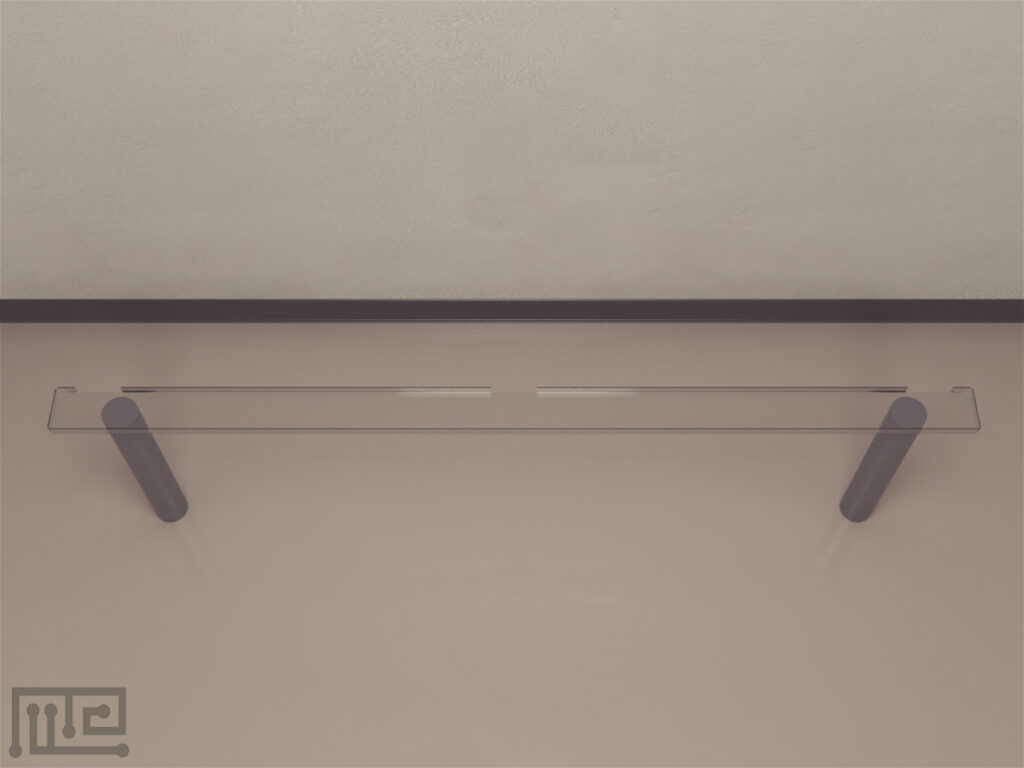 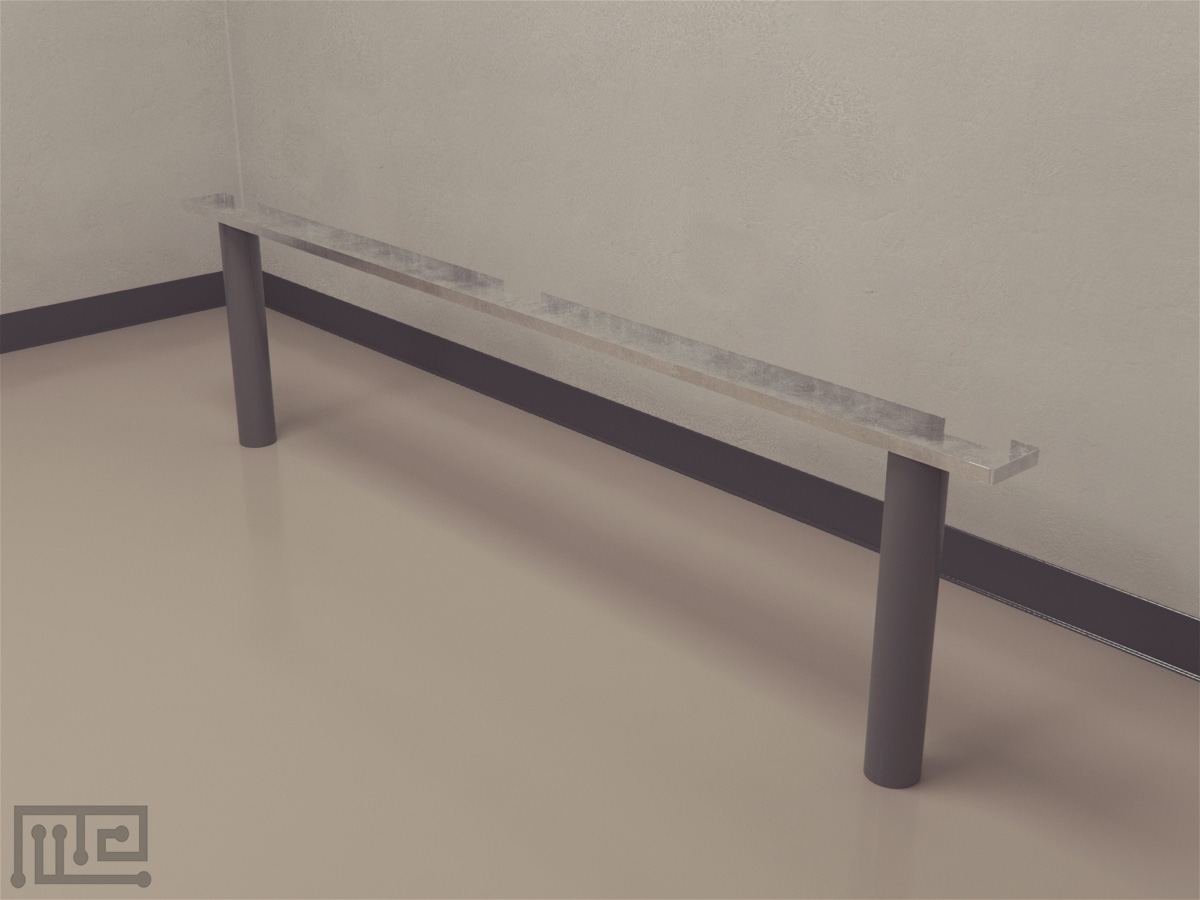 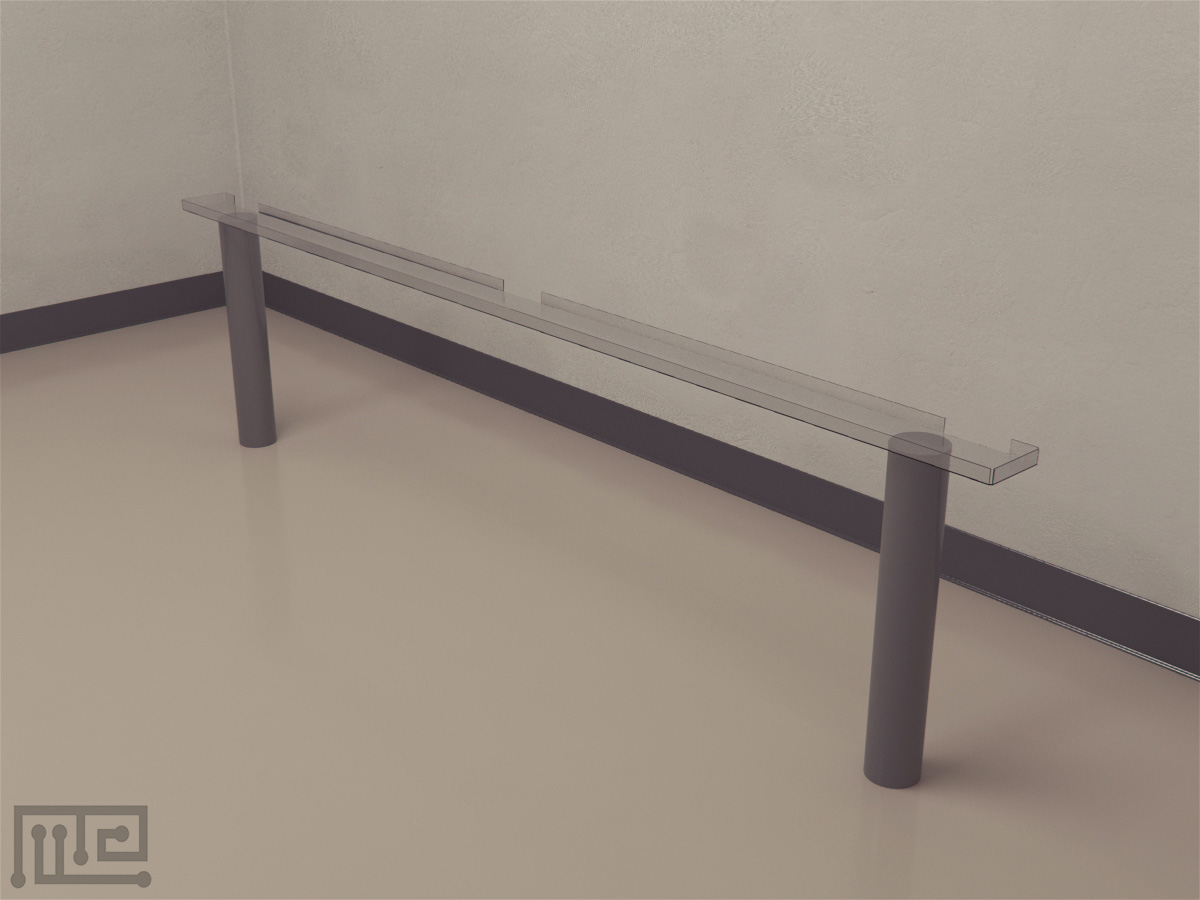 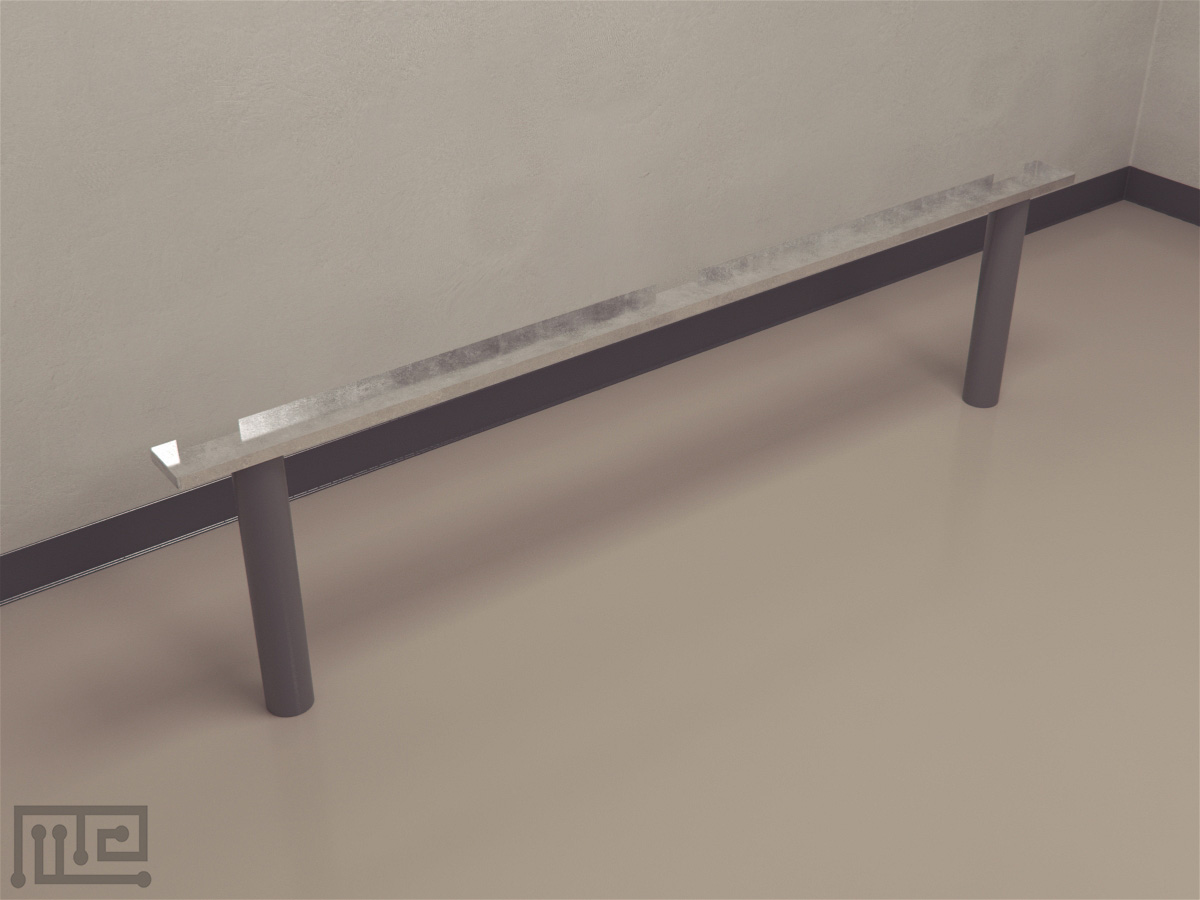 The Linear Maze was used in an experiment by Xiang Mou et al. (2016), to explore the neural basis of local enhancement effect of social observation in obtaining useful knowledge in rats.

The maze is a 2-m long linear track made of galvanized steel or “acrylic”.

They monitored the hippocampus place cells in observer rats as they stayed in a small box with three opaque sides and only one open side toward the track. This is used as an observation box where observer rats watch a demonstrator rat running on the linear track. Later, observer rats run the same linear track themselves.

Mazeengineers offers the Linear Maze for both mice and rats. Custom coloring and customization are available upon request.

Linear maze is a socio-behavior task that tests local enhancement theory (LET) in rodents – belief that the presence of conspecifics enhances social learning in an animal. An animal can get a better understanding of the unexplored environment by merely observing social subjects in its surroundings.

Social learning is acquired by observing or interacting with others. Many species utilize “local enhancement” as a means of social learning. In the presence of social subjects, the animal acquires environmental attributes such as food availability and safety (Zentall, 2006). Such companionship impacts the animal’s spatial processing in the brain. Spatial information of an environment is processed in hippocampal place cells. Place cells become active at specific locations called place fields.

Linear Maze studies and questions how an observer’s place cells are influenced by another social subject navigating in a physically different environment. It involves placing rats in a small box and allowing them to observe a demonstrator rat run on a nearby linear track. Later, the observers are also allowed to run on the track while their place cell sequence is monitored before and after running. Results show that the observer’s place cell sequence during observation of a demonstrator matches the sequence during track running.

The apparatus consists of a linear track made of galvanized steel, a small box (25cm x 25cm x 40cm) with three sides opaquely-walled and one side open toward the track, and a rest box (60cm x 60cm x 100cm) placed 1 meter away from the track. Located at the center of the rest box is a flower pot (30cm tall) with a ceramic plate (20cm diameter) placed at the top to house observer animal.

A curtain separates the apparatus from the recording apparatus and the experimenter. Red and green LEDs are mounted over the animal’s head to record hippocampal relays. A ceiling camera is fitted at the top.

Milk wells are placed at both ends of the linear track for reward delivery.

House animals in groups for 7 days. Following acclimation, partially food-deprive demonstrator rodents to 85-90% of their baseline body weight. Meanwhile, train them to run on the linear track for milk reward. Training should continue for 20 minutes per day for 2-3 days.

Simultaneously, surgically implant hyperdrive with movable tetrodes and a reference electrode in the non-trained rats to target the hippocampal CA1 region. When rats recover from surgery, restrict dietary intake to 85-90% of the baseline weight.

The experiment begins after 3-4 weeks of tetrode implantation when sharp-wave ripple signals are observed. Recording can be done with a ceiling camera (Noldus Etho Vision® XT).

Local Enhancement Training in the Presence of Social Subjects

Divide implanted rats into two groups. Place one rat from each group in the observation box for 15-30 minutes every day for 2-3 days. For one group (A), allow a well-trained demonstrator rat to run on the linear track, for the other (B), leave the track empty.

Assessment of LET in Rats with Pre- and Post-Box Sessions

After 6-12 days of pre- and post-box sessions, record the following conditions;

For group B implanted rats, repeat the same process of pre- and post-box sessions but without demonstrator rat for the first day. For the rest of the days, all sessions are repeated with a demonstrator.

Impact of Social Subjects on Spatial Processing of Observer

Mou and Ji (2017) recruited 3-6 months old healthy male rats, and after habituation, acclimation, and surgical implantation subjected them to pre-box, track, and post-box training sessions. They tracked the animal’s position and behavior using LED mounts on their heads. They found that watching a well-trained demonstrator helped the observer rat acquire LET, using which it improved learning of the environment it had not physically inhabited or explored. Observer rats who did not watch the demonstrator rat during the pre-recording training phase did not demonstrate good spatial learning of the unexplored surrounding.

Observer rat’s behavior is quantified by:

The linear maze is a novel tool to test untested LET in rats. By combining a series of tests, it successfully covers behavioral and electrophysiological aspects of the local enhancement theory. The design protocol has an array of tests to provide ample opportunity for the animal to observe and learn about its surroundings without being physically present.

The maze provides a unique opportunity to observe environmental attributes that animals acquire with the help of LET. These include inherent alertness to stay safe and determine food resources to sustain life.

The maze can measure exactly how animals benefit from and make the most out of their environment in the presence of social subjects.

The protocol design is complicated and lengthy. Animals require lengthy acclimation, followed by training sessions lasting about 12 days. Even though the training sessions do not exceed 15-30 minutes a day, the lengthy duration of the task can complicate the scoring and tire the animal by excessive engagements. Stress and over-handling of the animal can alter the results.

The maze design looks archaic and makeshift. Animals have to be repeatedly moved from one box to another in order to accomplish the task.  The maze design needs to be more flexible to overcome this challenge. Moreover, the flower pot used to perch the observer can accidentally topple and disturb the experiment.

Another drawback of the Linear maze is that in order to measure hippocampal relays, it requires surgical implantation of tetrodes. The incision takes weeks to heal, delaying the onset and execution of the experiment.