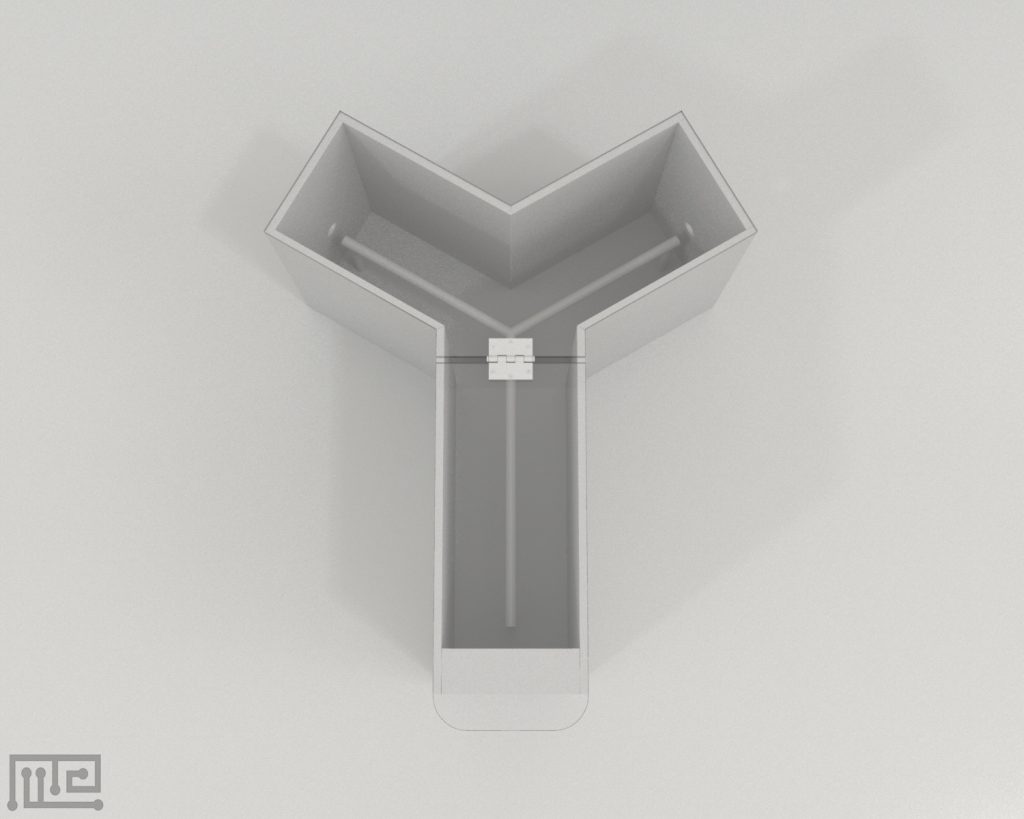 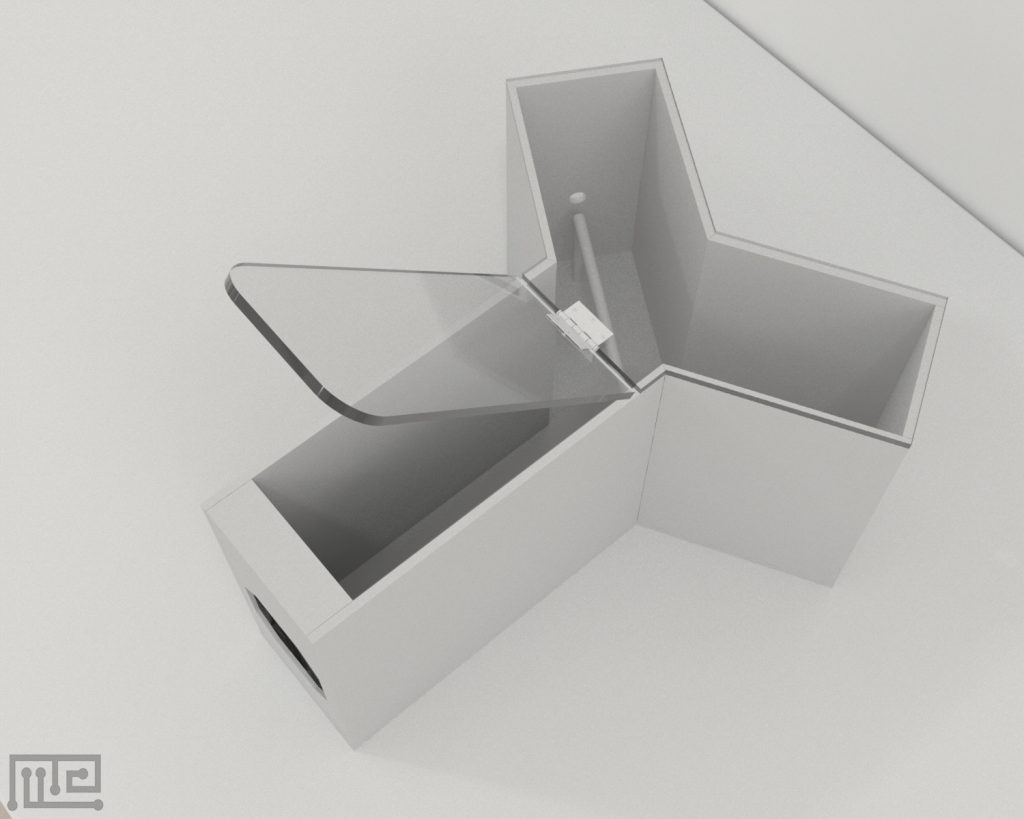 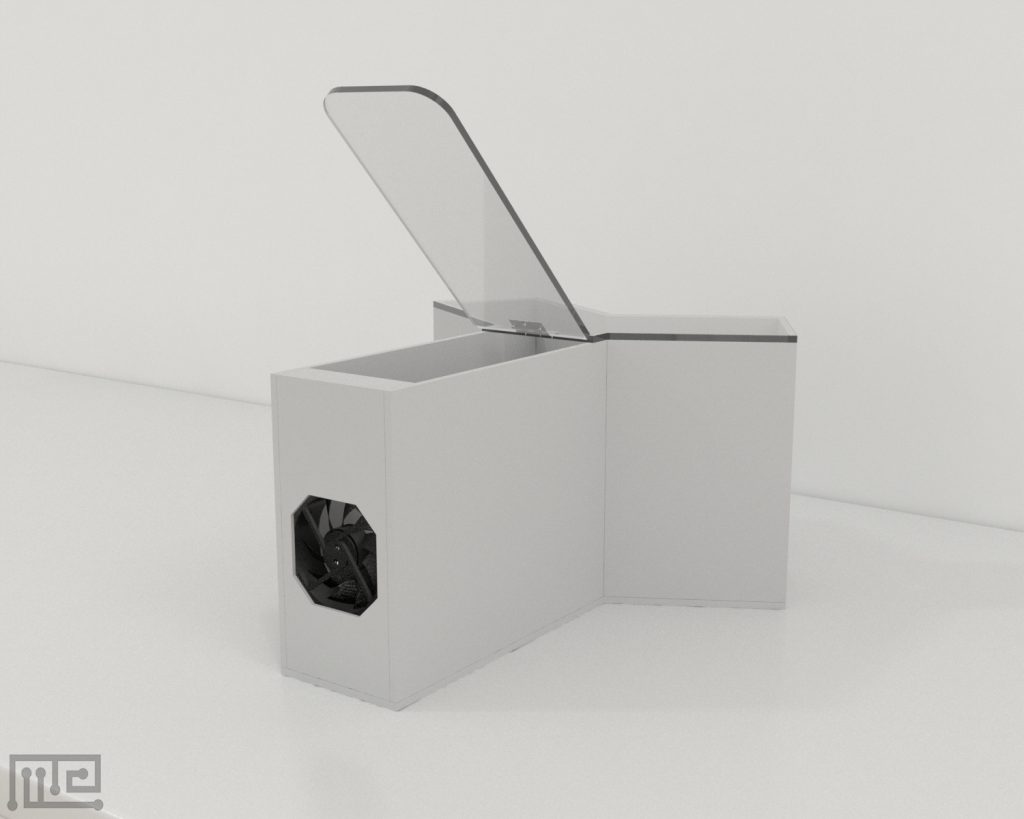 The Locust Y-Maze is a two-arm Y-maze containing a raised wooden Y-shaped rod. It was used by Patrício Simões et al. (2011), to assess associative olfactory learning in the desert locust.

The two arms of the Y-maze are separated by 90deg and the top is covered with transparent plastic, providing a clear view of the animals throughout the test. Access to the Y-maze is by a lid in the top of the maze.

In the experiment, desert locusts secured in plasticine received a constant flow of blank air directed to the antennae. Odours were delivered using a timer-controlled air pump, which also switched on the LED during the odour presentation. The LED is hidden from the locust’s view. A video camera recorded both the locust’s behaviour and the LED.

Locust Y Maze is a classical conditioning paradigm used to assess associative olfactory learning responses in the desert locust Schistocerca gregaria. A Y-maze is a modified form of T maze similar to rodents Y-maze. Locust Y-maze arena is an acrylic Y shaped apparatus occupied with a Y shaped rod. It consists of two arms separated from each other at an angle of 90o. The top is covered with a transparent lid, providing a clear view of the subject throughout the test.

Locust Y-maze is usually used to evaluate olfactory learning behavior in desert locusts. In the experiment, locusts secured in an acrylic box are starved for 24 hours and then subjected to trials involving an unconditioned stimulus (US) paired with a conditioned stimulus (CS). Later on, the animals are allowed to pass through the test arena in the presence of stable airflow (directed towards their antennae) and a light source. Stable airflow is provided by an air pump and extraction lamp, whereas LED is used as a light source. The conditioned olfactory responses of locusts are monitored and recorded with the help of a video camera such as Noldus Ethovision XT.

Another form of Y-maze is a long arm Y-maze used to assess rodent’s inherent ability to explore new places.

Locust Y-maze arena consists of a main arm (24cm long) and two decision arms 15cm each. Two arms of the maze are separated by an angle of 90o. The acrylic maze is 22cm high and 10cm wide. It is occupied with a Y shaped rod in the center. This rod is elevated 11cm above the floor of the maze and has a circular cross-section of 2.5cm diameter. The main arm of the rod is 21cm long, and the length of two decision arms is 13cm each. Gregarious animals are allowed to walk only along the rod occupying the central area of the maze. A lid provides access to the inside of the maze on the top. The lid is made of acrylic glass to enable a clear view of subjects throughout the test. The end walls of decision arms have a hole (1cm in diameter) in the center to facilitate the passage of odors into the maze. These odor entrances are connected to odor containers.

An air pump is used along with an extraction fan to maintain stable airflow inside Y-maze. The airflow is directed from decision arms towards the long arm. A 100W heat lamp is used as a light source above the junctions of the arms of the maze.

Before subjecting to the Y-maze test arena, locusts are exposed to olfactory conditioning. The pre-training involves the following steps:

After pre-training, locusts are subjected to the Y-maze test arena. Perform a single odor preference test in the Y-maze conditioning paradigm at the following intervals after training: 10min, 1hour, and 24hours. The test should be conducted as follows:

Note: The locusts who fail to choose or fall of the rod are discarded.

Dillen et al., 2015 performed an experiment to determine whether the foraging behavior in desert locusts is visually oriented or not. Furthermore, feeding-dependent regulation of Schgr-sNPF transcript levels was studied. The insects were subjected to the training arena consisting of a rectangular cage. This cage had two smaller cages at the far end, and these smaller cages were lined with green or yellow laminated paper on the inside. Later on, the subjects were exposed to the Y-maze test. The effect of short neuropeptide F on visual memory of locusts could not be demonstrated. However, they succeeded in establishing an experimental assay to demonstrate the efficiency of learning and memory in Schistocerca gregaria.

Simões et al., 2012 studied how post-ingestive aversive memories enable desert locusts to make appropriate olfactory decisions in a Y-maze. They observed the effect on associative memory of these insects when subjected to odor and toxin-free food accompanied by toxin nicotine hydrogen tartrate (NHT) injections. It was concluded that locusts could form specific long-lasting aversive olfactory associations which they use to abstain from toxic food when they are foraging.