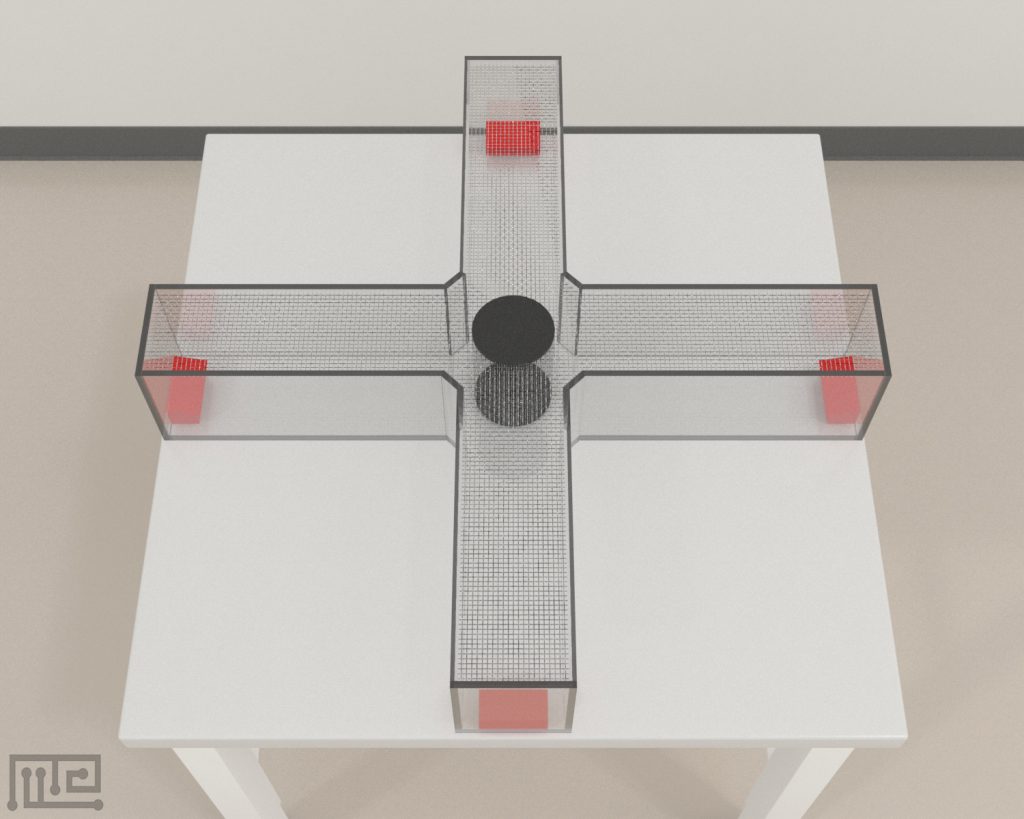 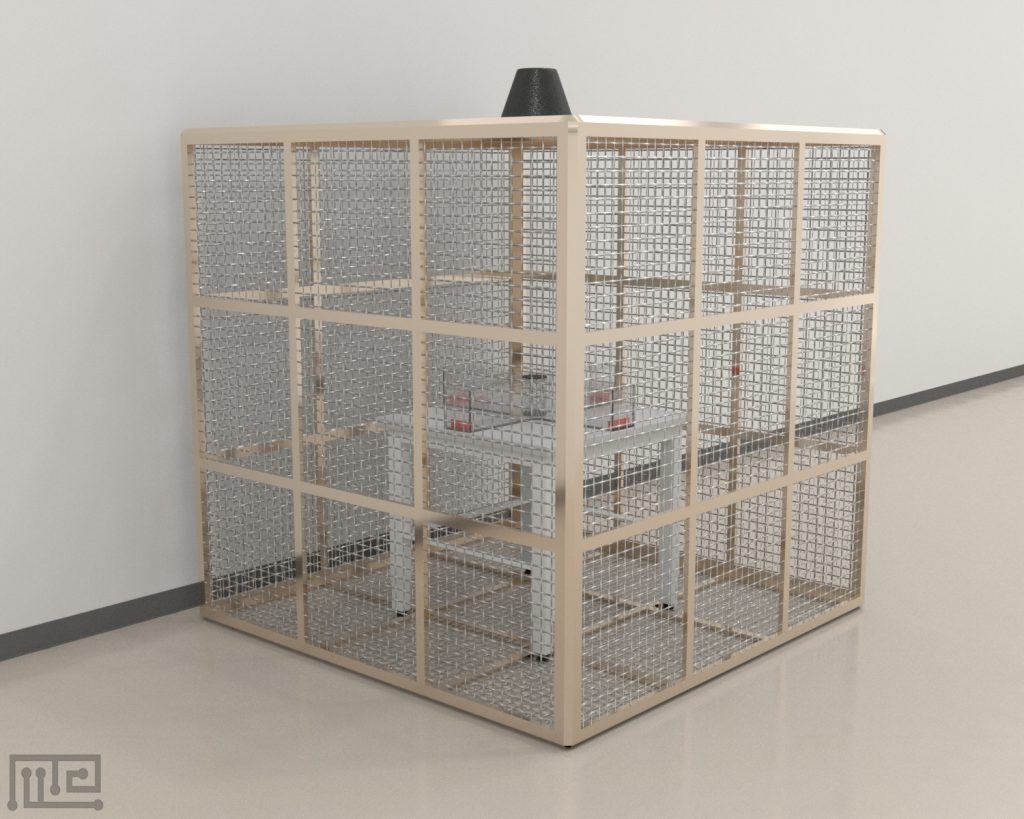 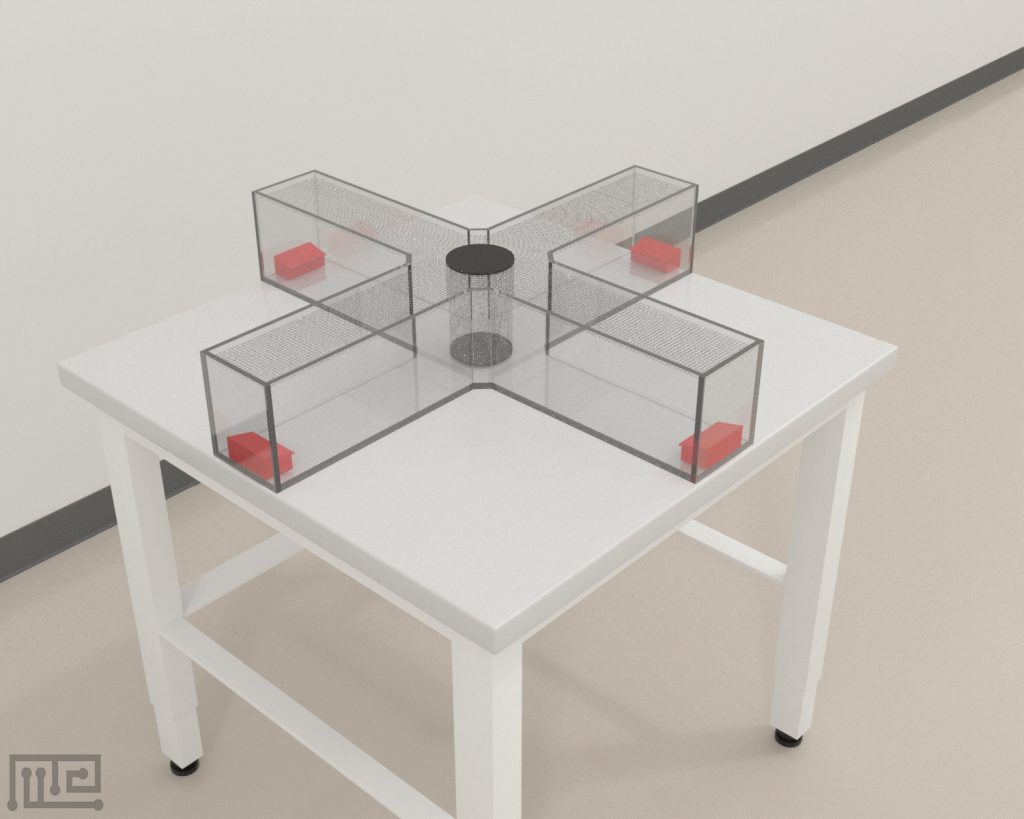 The Magnetic Compass was used in a test to show that polarized light modulates light-dependent magnetic compass orientation in birds by Rachel Muheim et al. (2015).

The maze was centered in a magnetic coil (Merritt design), thus the magnetic field could be directed toward any of the four maze arms [mN at geographic north (gN), geographic south (gS), geographic east (gE), or geographic west (gW)].

Individual birds were trained to find a food reward at the end of each of the four arms. The food reward (during training trials only) is hidden in one of the four red trays. At the center of the maze there is a release device from where the birds are remotely released to explore the maze. The unpolarized light source is centered above the maze. Linear polarizers and/or depolarizers can be inserted in a filter holder just below the light source.

The Magnetic Compass is used to study spatial orientation in birds when presented with magnetic cues and/or polarized or unpolarized light cues. It is a four-arm plus maze that is centered in a magnetic coil, which allows the magnetic field to be directed towards any of the four arms of the maze. An unpolarized light source is present one meter above the maze in which linear polarizers and/or depolarizes can be inserted in a filter holder just below the light source.

The Magnetic Compass consists of a four-arm plus maze that measures 1.2 m in length and 1.2 m in width. The maze is made of transparent acrylic and covered with plastic mesh on top. A cylinder that is also made of transparent acrylic with a mesh top is placed in the center of the maze to release the subject into the maze. At the end of each maze arm, a red tray is placed in which food rewards can be placed. The maze is centered on a wooden table inside a magnetic coil that measures 2 m in length and 2 m in width and is aligned along with the cardinal magnetic directions. The magnetic field can be directed at any of the four arms of the maze [mN at geographic north (gN), geographic south (gS), geographic east (gE), or geographic west (gW)]. Light is provided inside the maze through a central light source that is present 1 m above the maze. Linear polarizers and/or depolarizers can be inserted in a filter holder just below the overhead light source.

Clean the apparatus thoroughly in between trials to avoid odor cues from previous trials. Appropriately light the maze arena. A tracking and recording system such as the Noldus Ethovision XT can be used to assist with observations

The following parameters can be observed using the Magnetic Compass:

The explorative drive of subjects is highly important in the completion of the task. Unintentional stimuli may affect task performance. Factors such as age, gender, and strain of the subjects may affect task behavior.