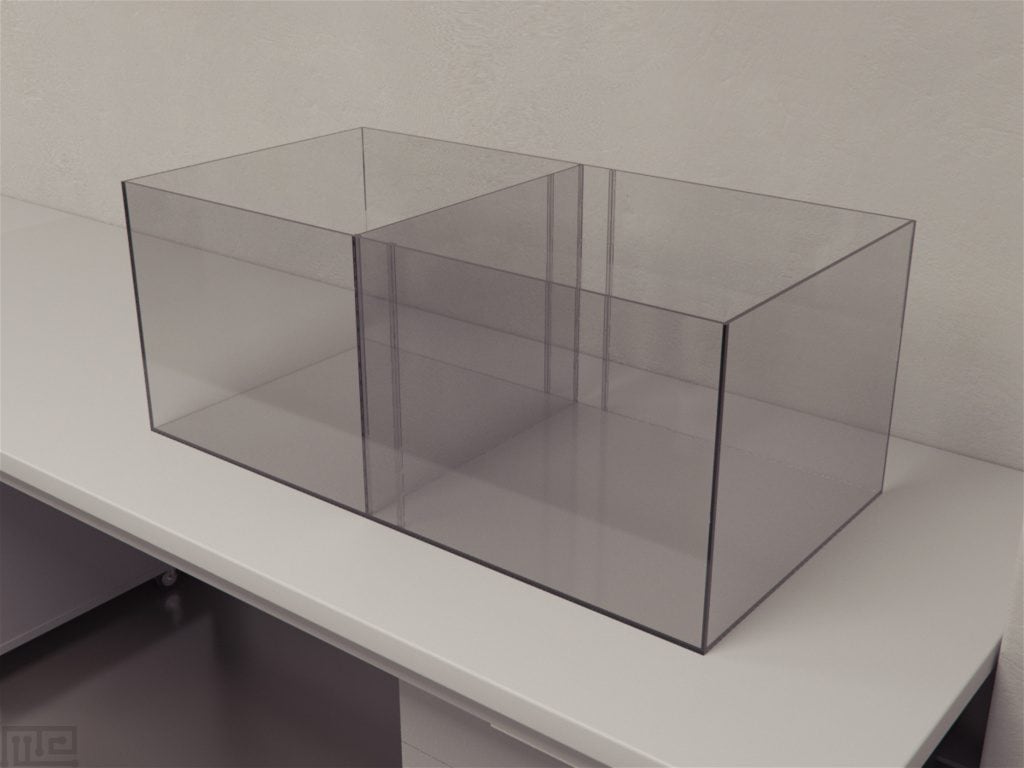 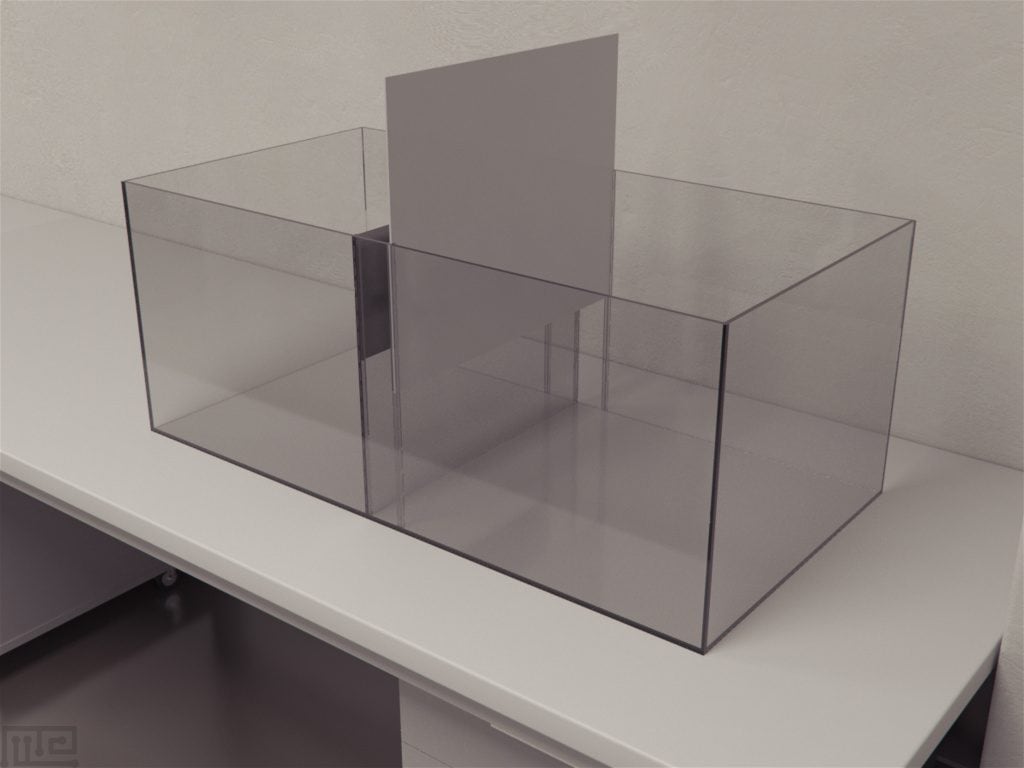 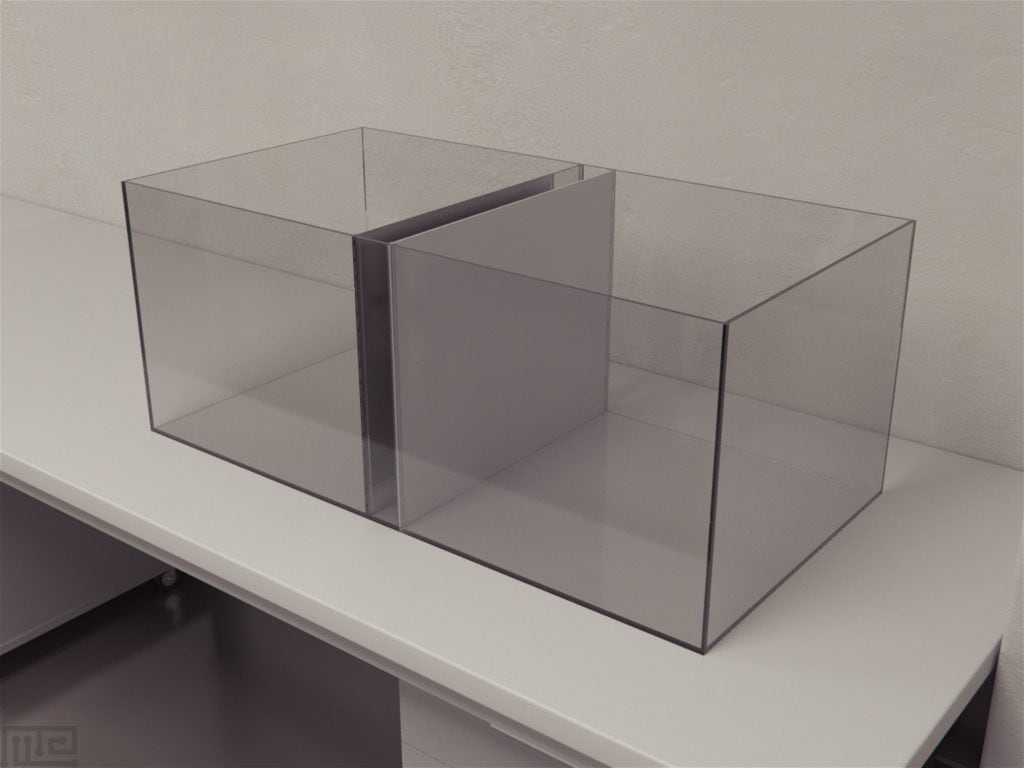 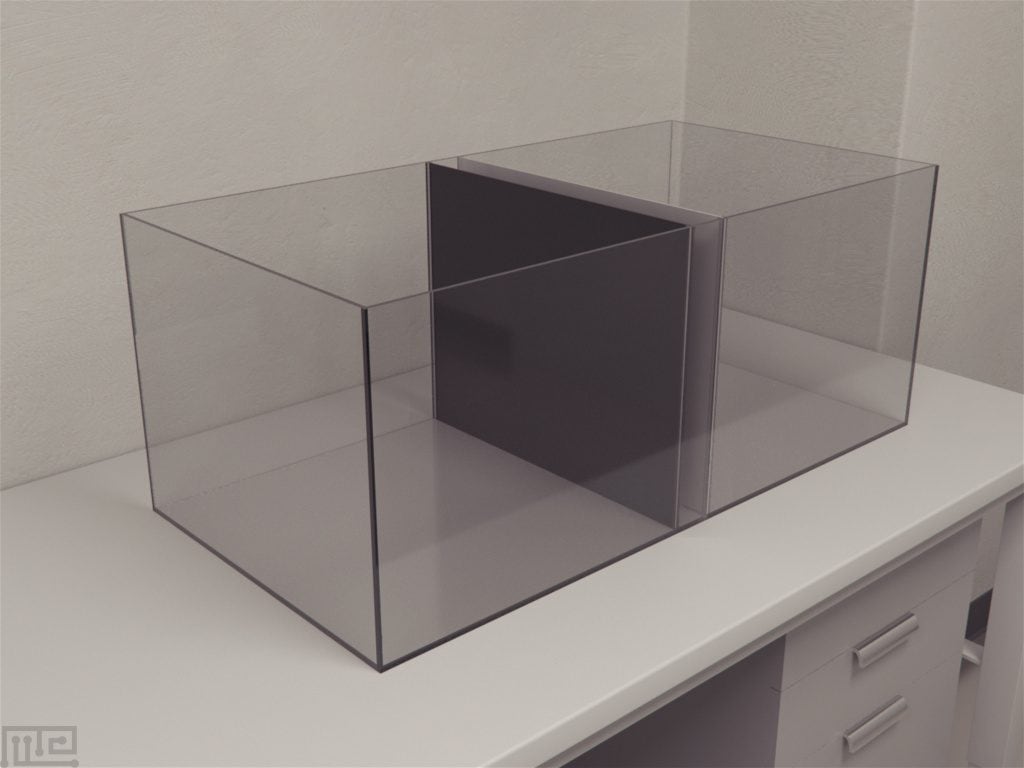 Mirror biting test is a broadly applicable paradigm used to evaluate the aggression displayed by different fish species towards their interspecific and intraspecific opponents. The mirror biting test apparatus is also utilized to gauge the variance in subject’s behavior when confronted by its mirror image versus the aggression showed towards a live opponent.

The mirror biting test apparatus is highly practical in behavioral assessment of different fish species, ranging from overt aggression to restrained hostility and from distant aggressive displays to the time spent close to the intruder. It can also be employed to study and correlate the divergent behavior displayed by fish species towards protecting their territory when threatened by an intruder. In a substantial number of cases, a difference in behavior is observed towards the mirror image and a living stimulus.

Balzarini’s apparatus comprises a glass tank that is partitioned, keeping one side slightly bigger than the other. The small compartment is further subdivided into two parts with the help of an opaque partition that can be easily removed during the trials and can be replaced either by a mirror or a transparent Plexiglas sheet.

The mirror biting test rules on the theory that fishes lack self-recognition and hence respond to their mirror image in the same manner as they do to a conspecific. However, the recent researches have highlighted the different gene and hormonal expressions displayed by the fish species when exposed to a live opponent. These responses were quite different from the behavioral traits exhibited by the same subjects towards their mirror image. Hence, the predictive value of mirror test needs to be ascertained in different species.

Mirror biting test apparatus is rationally designed to investigate the suitability of mirror simulations for assessing aggression. On a basic level, this apparatus is used to monitor the subject’s response towards its mirror image. However, an advanced use of this apparatus allows it to be used for detailed investigation and comparison of overt and restrained aggression that the focal fish displays towards its mirror image and live conspecifics.

The mirror biting apparatus consists of a glass tank that is 100 cm long, 50 cm wide and 40 cm high. The tank is divided into two parts measuring 53 and 47 cm, with the help of a transparent Plexiglas sheet.

The small portion of the tank, measuring 47x 50 x 40 cm, is further subdivided into two parts using an opaque partition. One subdivision measures about 27 cm in length while the other one is 20 cm. The compartment measuring 27 x 50 x40 cm is used for the focal fish and is equipped with half a flower pot in one corner, to serve as a refuge during the trials. The opening of the pot is angled at 45° to allow the subject to hide, while it also minimizes the time needed for the subject to realize the intruder threat.

The opaque partition can be conveniently replaced either by the mirror (in mirror image tests) or a transparent Plexiglas to expose a stimulus fish (in the opponent test). Both of these tests provide substantial evidence of aggressive behavior displayed by the subject towards the interspecific or intraspecific species. All the partitions can be easily removed for disinfection and cleaning after the trials.

Each holding tank contains around 20-30 fishes, which are deprived of the breeding substrate to prevent them from forming territories. The water temperature is maintained around 27 ± 2 °C, and the subjects are exposed to a 13:11 light/ dark cycle. 5 days during the week, the fishes are fed with flake food while on the 6th day; they are offered a defrosted live food mix. On the day of the experiment, both the subject and stimulus fishes are fed after the trials.

A day prior to the experiment, the mirror biting apparatus is filled with 25 cm of tap water, and the bottom of the tank is covered with 1 cm of sand. The test fish is introduced into the apparatus and is allowed to acclimatize overnight in the new environment.

On the day of the experiment, subjects are tested in both the mirror and opponent trial on the same day, keeping a 3-hour break between the two. The mirror or Plexiglas wall is inserted behind the opaque partition 30 minutes before the start of the trial. In the opponent test, the stimulus fish is approximately the same size as that of the test fish, with a maximum difference <10% of the subject’s standard length. The stimulus fish is placed in its compartment, just after fixing the Plexiglass and is allowed to acclimate for 30 minutes.

In both the trials, aggressive behavior is recorded using the Noldus Ethovison XT. To start the experiment, the opaque sheet is lifted exposing the test fish to either a mirror or an opponent. The size of the window displaying the stimulus to the test fish is about 50 cm long and 20 cm high. The behaviors of both the test and stimulus fishes are recorded for around 20 minutes, in each trial. The three values that are noted during each trial include overt aggression (biting attempt and ramming), restrained aggression (fin raise, fast swimming, aggressive displays, etc.) and the time spent near the opponent. It has been observed that there is a variation in behavior in different fish species, towards their own image and when confronted with a live stimulus. After testing, remove the fishes and disinfect the apparatus before further testing.

Evaluation of Behavior and Aggression

The mirror biting apparatus is highly practical in evaluating the aggressive displays by subjects towards the stimulus, be it a mirror or a live opponent. The convenient dimension of the tank facilitates close monitoring and evaluation of the subject’s responses.

This apparatus allows assessment of response displayed by the subjects when they are exposed to their own image as compared to when they are confronted with a living stimulus. This approach is very effective in ascertaining the validity of the mirror simulation tests in each species and evaluates behavioral traits, as it helps in determining the level of self-recognition in subjects.

Mirror biting apparatus is useful is studying the differences in responses displayed by different species towards their conspecific. This study is practical in ascertaining the social structure of tested species and its effects on the individual’s responses.

The sample data represents the overt and restrained aggressive displayed by the subjects towards their mirror image and live opponent when tested using the mirror biting apparatus.

The mirror biting apparatus offers an exceptional advantage to observe the behavioral traits displayed by different fish species. The unparalleled benefit of testing the subject’s response towards its mirror image and live opponent, within the same setup is not only convenient but also promises reliable results. This apparatus is helpful in ascertaining the validity of mirror image tests on different fish species.

The expedient dimensions of the tank allow the fishes to freely move their body and hence display their natural behavioral traits. Furthermore, the spacious glass tank makes it very easy to observe and draw conclusions about the subject’s response, even with the naked eye.

The mirror biting apparatus offers a highly effective environment to assess the conspecific differences displayed by the subjects, as well as their social behavioral traits towards the same species.