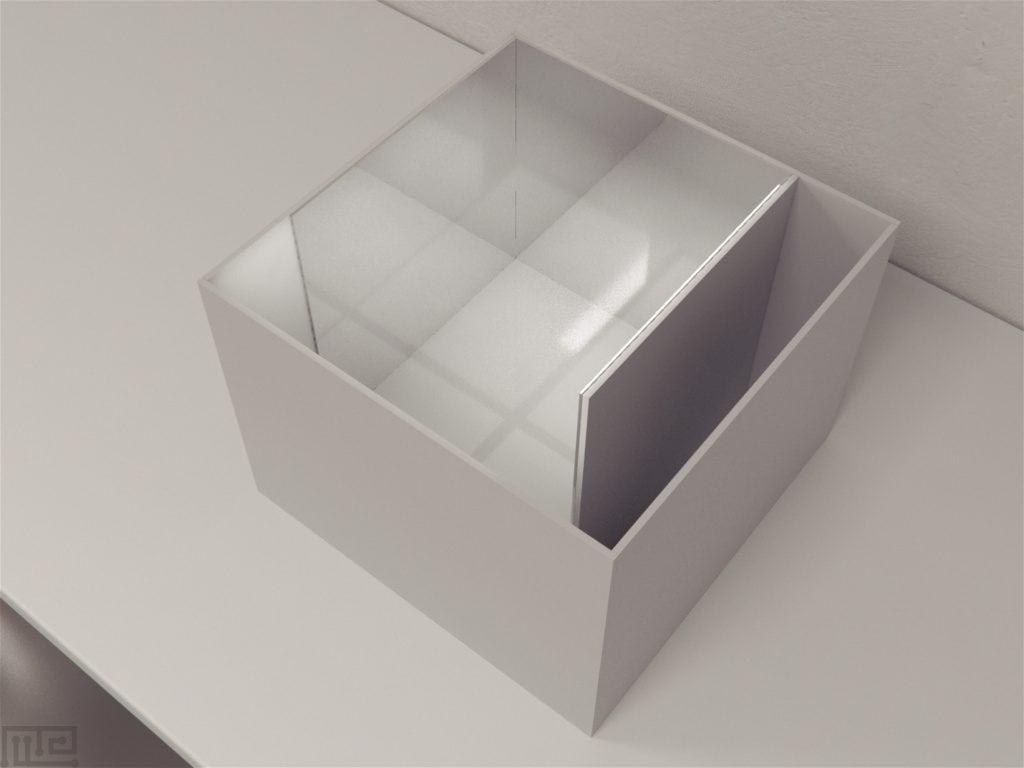 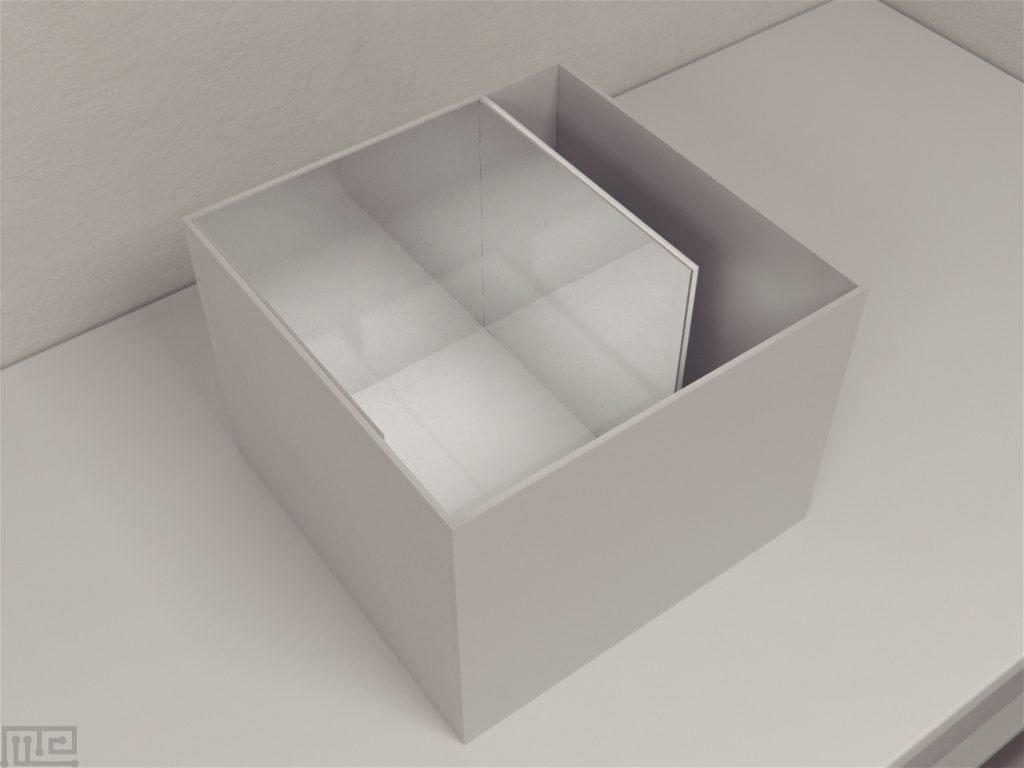 The mirror chamber for rodents was originally described in the literature for evaluation of anxiety. The use of mirrors is an interesting addition to the MazeEngineers repertoire and novel research can be done in fields of learning, spatial orientation, and exploration. This chamber, however, is classically described for anxiety.

For Mice and Rats

The Mirror Chamber task is primarily used in the assessment of anxiety levels in rodents. The apparatus was created by Toubas et al. as an alternative to the Elevated Plus Maze and the Light-Dark Box task. Most animals, including rodents, lack the ability to recognize themselves in the mirror. Thus, a chamber lined with mirrors immediately creates a sense of anxiety and panic in the animals. The Mirrored Chamber evaluates anxiety-related behaviors by observing the tendency of the rodent to re-enter the mirrored chamber. Rodents with anxiety may choose to remain in the mirror devoid alleyway instead of exploring the mirrored chamber. When the animals encounter their reflections in the mirror, they often show aggression as they perceive the reflection as a threat. Animals may also withdraw from the mirrored area or show timidity as a result of anxiety induced by the environment. These responses may be due to the impression that there are other subjects present in the chamber or due to changes in light perception (Paterson et al., 2010).

The general design of the Mirror Chamber consists of an open-top box that is divided into a large chamber that has mirrors on 4 walls and an alleyway that is devoid of mirrors. Other apparatus and tests used in the evaluation of anxiety-related behaviors include the Elevated Plus Maze, the Light-Dark Box, the Open Field Test, the Novelty Suppressed Feeding task and the Fear Conditioning Chamber.

The Mirror Chamber apparatus is available in two models; one based on the design used by Kliethermes et al. and the other based on Paterson et al. 2010 model.

The Kliethermes Mirror Chamber comprises of a three-sided open box, placed in the corner of an opaque open field which opens up into an alleyway. The opaque open field has a dimension of 40 x 40 x 30.5 cm. The three-sided box (30.5 x 30.5 x 30.5 cm) is lined with mirrors on its three sides, and the wall of the open-arena facing the opening of this box is also paneled with a mirror. On one side of this large chamber, an alleyway (40 x 9.5 x 30.5 cm) is created by the space between the box and the chamber. This alleyway is devoid of mirrors, thus, acting as a safe space for the rodents.

The second design, based on Paterson’s model, uses a nested chamber design. The larger outer box (38 x 38 x 29 cm) has one mirrored wall while remaining surfaces are opaque. A smaller (28 x 28 x 28 cm) box that has all its 5 inner-surface paneled with mirrors in placed in the center of the larger box, thus creating alleyways around itself.

Prior to beginning the experiment, the entire apparatus must be thoroughly cleaned. It is also important to clean the apparatus between trials to minimize the influence of any residual stimuli on the rodent’s performance. Appropriate lighting must be used to illuminate the apparatus without causing any shadows or reflections. Lighting can be manipulated to create bright-light induced anxiety. To assist the observation, tracking and video system such as Noldus EthoVision XT may be used.

Since the apparatus is used to evaluate anxiety, no pre-training for the task is required. The subject is allowed at least 30 minutes to acclimate to the testing arena. The subject is then placed on a corner of the mirrored chamber that is farthest from the exit. It is allowed to explore the apparatus for at least 5 minutes, during which observations of its behaviors are made.

Evaluation of effects of anxiolytics and anxiogenics of mice behavior

Kliethermes et al. used WSC-1 and WSC-2 mice to evaluate the effects of anxiolytics and anxiogenics on the performances of the subjects in the Mirror Chamber task. Subjects were injected with either ethanol, sodium pentobarbital, diazepam, d-amphetamine, DMCM or PTZ, after which they were placed in individual holding cages for approximately 25 minutes. The subjects were then tested individually in the Mirror Chamber task. Ethanol and pentobarbital led to an increase in locomotor activity and reentry into the mirrored chamber. However, diazepam led to an increase in reentry, though, a non-linear increase in locomotor activity could be observed. Unlike the aforementioned drugs, the remaining drugs resulted in a decrease in voluntary reentry into the mirrored chamber and locomotor activity, though amphetamine did not have a significant effect on the locomotor activity of the mice.

Evaluation of the effect of strain, lighting, and paneling on the mirror chamber performance

Paterson et al. investigated the performance differences between different strains of rats and the effects of changing the intensity of the lighting in the apparatus on the mirror chamber performances. The investigation was performed using 7 strains of mice and light intensity varying between dim to bright. The investigation also evaluated the effects of paneling (mirror, black and white) on the performances. It was observed that different strains showed a significant difference in latencies. Effects of different light intensities and different panels could also be observed with some strains showing greater latencies in white-paneled walls than in mirror or black panel set-up. However, no strain, panel and light interaction effect could be observed.

Other behaviors such as timidity or aggression can also be observed during the trials.

Plotting these parameters on graphs allows easy comparison of anxiety behaviors in control versus disease/treatment model. Animals with higher levels of anxiety are more likely to spend their time in the sheltered alleyways that are devoid of mirrors, while those with lower levels of anxiety are more likely to re-enter the mirrored chambers voluntarily. This test allows evaluation of effects of both anxiogenic and anxiolytic pharmacological compounds.

The Mirror Chamber task provides a simple and straightforward measure of anxiety and anxiety-related behaviors in rodents. The test takes advantage of the subject’s inability to recognize its own reflection in the mirror to evaluate anxiety. Since the subject fails to recognize its own reflection, the simple set-up of mirrors in the Mirror Chamber apparatus induces anxiety and panic in the animal. In comparison to other apparatus used in anxiety assessments, the Mirror Chamber tasks can be reliably used to evaluate the effects of both anxiogenic and anxiolytic drugs and compounds. Further, like the Elevated Plus Maze, the Mirror Chamber is also capable of evaluating behaviors that can be attributed to genetic variations in the same species. The simple design of the Mirror Chamber also makes it easy to modify. Modifications such as changing the mirrors to opaque panels or introducing more mirrors into the apparatus can easily increase the level of anxiety induced. Changing the lighting intensity can also increase or decrease the anxiety felt by the subject.

Though the apparatus is efficient in evaluating both anxiolytic and anxiogenic effects, combining it with other tests may provide a better assessment of anxiety and anxiety-related behaviors. Handling of the animals, the gender of the animals and its mental state can also influence performance in the task. Repeated trials on the Mirror Chamber may result in experiment fatigue since the task utilizes the novelty of the environment in the evaluation of anxiety behaviors. Further, the intensity of the lighting used can also have a significant impact on the performances. External stimuli (olfactory, visual and auditory) can also influence performances. Different strains can show variation in performances; thus, care must be taken before translating the results. Manual scoring is not recommended since it is prone to errors and presence of a tester can influence the performance. Should an investigator be present during the task, it is recommended that they remain out of sight of the subjects.