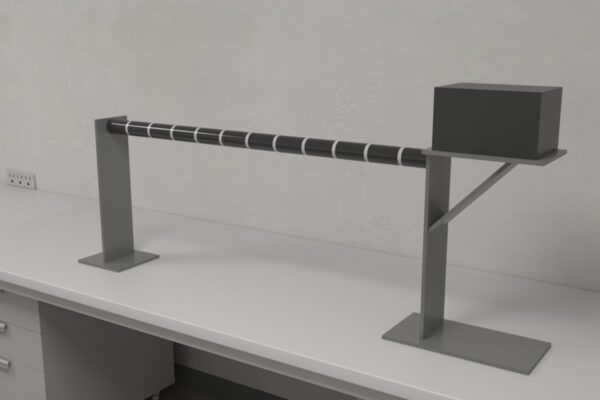 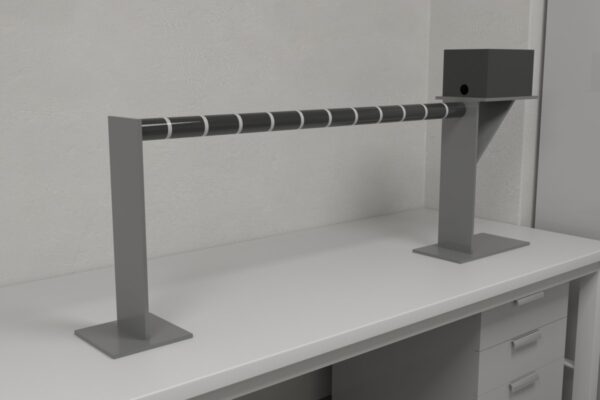 Our modified beam walking apparatus has been updated based on the 2016 publication of Sweiss et al who created this maze to simultaneously evaluate brain injury on the effect of anxiety and vestibulomotor function.

The Modified Beam Walking Apparatus is used to measure motor coordination and anxiety-related behaviors in rodents. It comprises a narrow elevated beam with a safe box located on a platform at one end of the beam. During the task, the subject must traverse the beam and enter the safe box within the required time limit. Slips and falls from the beam and the time taken to traverse are used to measure motor coordination. On the other hand, anxiety is assessed by examining peeking behaviors and full-body emergencies from the safe box.

Anxiety and motor dysfunctions are characteristics of neuropsychiatric disorders such as autism spectrum disorder (ASD) and depression, and traumatic brain injury (Eltokhi, Kurpiers, & Pitzer, 2021; Ahmed et al., 2017). Behavioral tests in rodent models of these diseases are used to provide more insight into them and to test the effects of parameters such as drugs on these disorders. However, using separate behavioral apparatuses to measure anxiety and motor coordination can be time-consuming and costly. The Modified Beam Walking Apparatus is, therefore, a valuable tool for studying neuropsychiatric disorders and traumatic brain injury by measuring multiple behavioral traits using one apparatus.

The Modified Beam Walking Apparatus consists of a narrow beam measuring 120 cm in length and 5 cm in diameter. The beam contains dashed markings spaced 10 cm apart. The beam is placed 50 cm off the floor using two pillars. At the end of one pillar, a platform is present that supports a black-colored safe box. The safe box has a circular opening of ∼15 cm in diameter for the subject to enter easily. The safe box mimics the Elevated Plus Maze enclosed arms.

The Modified Beam Walking Task is divided into two phases: the motor coordination phase and the anxiety assessment phase. The phases are conducted back to back within the same training or testing session. Clean the apparatus after every session.

Conduct fifteen training sessions, each lasting for five minutes, three times a day, with an inter-trial interval of one hour between sessions. Conduct test sessions in the same manner as training sessions in which the performance of experimental versus control animals can be assessed on the tasks.

The following parameters can be assessed using the Modified Beam Walking Apparatus:

The Modified Beam Walking Apparatus measures anxiety and motor coordination in rodents. Therefore, multiple behavioral apparatuses are not needed to measure these traits. Additionally, it can also be used in experiments that want to examine only one of the traits. It is a valuable tool in studying rodent models of diseases characterized by both anxiety and motor coordination. Each training and testing session is performed within five minutes; however, multiple training sessions may be needed for the subject to learn the task. Another limitation is that stress from handling may induce anxiety in the subjects and affect experimental results. Moreover, unintentional stimuli in the experimental room, such as loud noise, may affect anxiety-related behaviors.