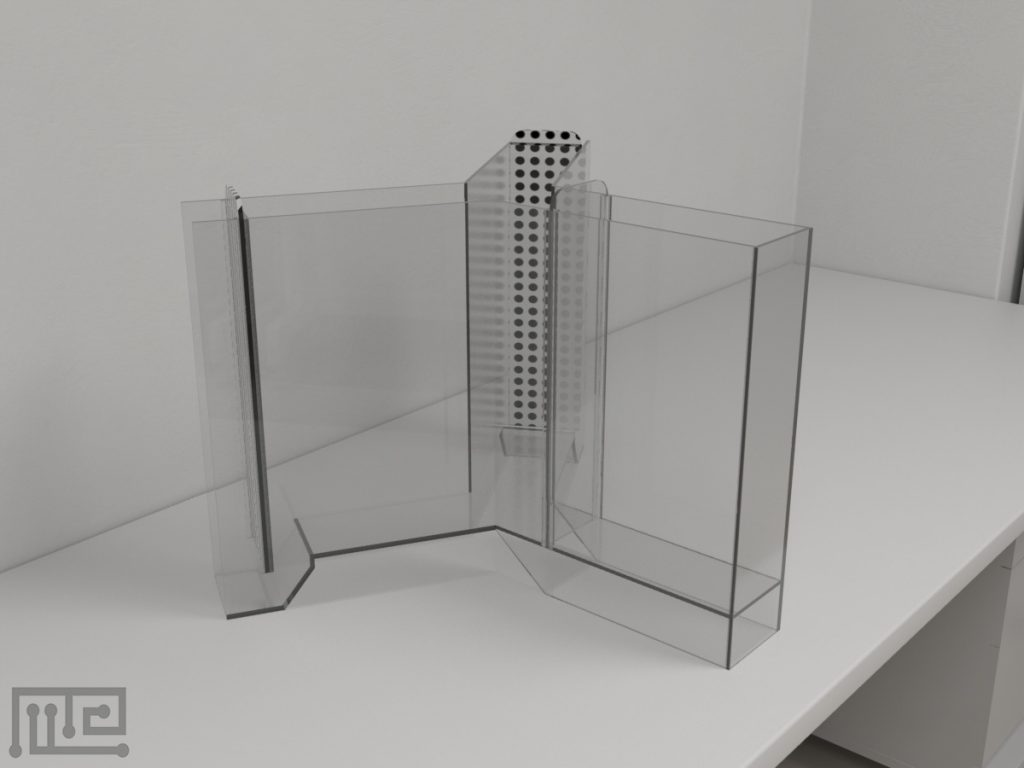 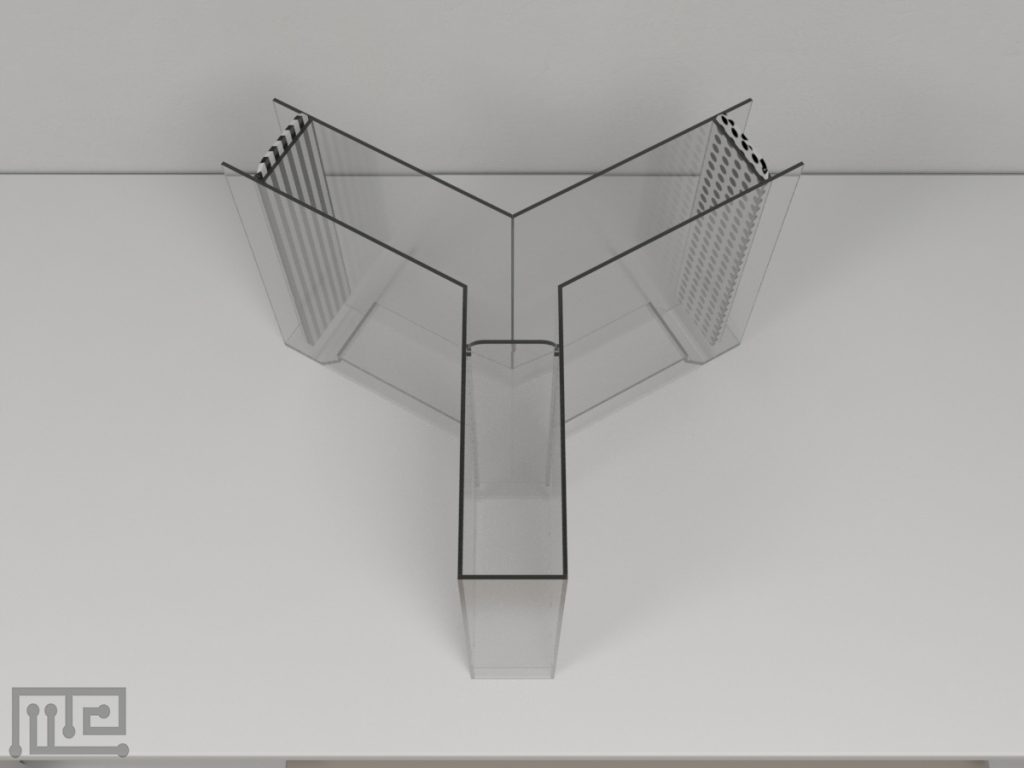 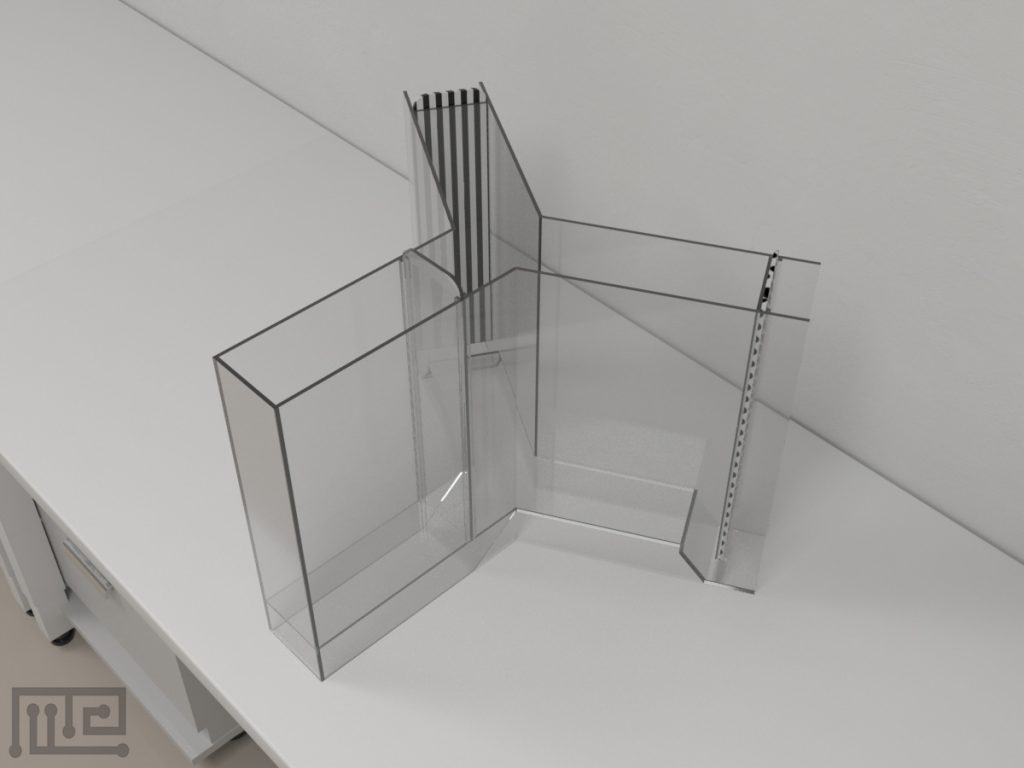 The apparatus was made of Acrylic, and can be clear, white, black, grey or blue for optimized video tracking. The three arms of the apparatus were separated by 120° angles. The objects and pictures were placed in two of the arms that could be modified to accommodate either objects or pictures.

The length of the arm was chosen so that the front face of the objects tested was approximately 15 cm from the rat. The ends of the arms were designed to increase the amount of exploration of the pictures.

The modified Y-Maze adopts the principal design of the traditional Y-Maze, offering the subject a single decision point. Unlike other spatial cognition testing apparatuses, such as the Morris Water Maze or the Radial Arm Maze, the modified Y-Maze tasks are purely visual in nature, thereby allowing a refined assessment of cognition.

The modified Y-Maze is usually used in the assessment of object recognition and perceptual oddity judgment in rodents. The design of the maze ensures the minimization of spatial and contextual confounds and encourages the subjects to explore the stimuli more than the environment. The modified Y-Maze task is usually carried out in phases of three with combinations of the sample, delay, and choice phases varying based on the investigation. Sample phases are often used to introduce the subject to identical object stimuli in both arms, which can then be followed by another sample phase using a new identical pair of stimuli or a choice phase. Choice phases pair the sample phase object in one arm with a novel object in the other. This pairing allows assessment of preference for novelty, which can be taken as a measure of object recognition. Further, choice phases can also use an object from each of the sample phases to assess recency memory in the subjects. Delays between the sample phase and choice phase are usually introduced by placing the subject in a separate holding area. However, the task can also be performed with minimal or no delays by the inclusion of a series of guillotine doors in the goal arms to separate stimuli (Bartko, Winters, Cowell, Saksida, & Bussey, 2007).

The modified Y-Maze apparatus permits the use of both 2D visual cue cards and 3D objects using a simple modification of the back walls in the goal arm. The back wall for holding 2D stimuli comes with a trench that encourages exploration of the entire visual cue card. Additionally, the apparatus comes with a covered start box, which is separated from the start arm by a guillotine door. Other Y-Maze variants include the Psyllid Y-Maze, and IR LED equipped Complex Y-Maze. Apparatuses such as the Novel Object Assay, the Novel Object Recognition Apparatus, the Continuous Novel Object Recognition Apparatus, the Bowtie Maze, and the Open Field are also used in the assessment of novelty preference, choice behaviors, and exploratory behaviors.

The Y-Maze consists of a start box, a start arm, and two goal arms. The start box measures 20 cm in length and 10 cm in width covered by an opaque lid. The start box is separated from the start arm by a guillotine door placed at 10 cm from the apparatus center. The start arm forks into two-goal (object) arms, each measuring 23 cm in length, allowing placement of object stimuli. The three arms of the maze are separated by an angle of 120° and are surrounded by a 40 cm high opaque wall to prevent visual access to external cues or climbing out. The back walls of the goal arms can be replaced to support visual cue cards. The replacement wall has a bottom gap of 6 cm depth to hold a stimulus cue card at a distance of 4 cm from the gap edge. This promotes exploration and encourages the subject to view the bottom of the cue card as well.

Clean the apparatus between before and after trial. Appropriately illuminate the maze. Ensure all stimuli used in the maze are wiped with a 50% ethanol solution between each trial to prevent the influence of any olfactory cues on task performance. The apparatus does not necessarily require washing between subjects to encourage saturation of the apparatus with odors. A maze cover can be placed at the height of 40 cm from the maze to prevent access to any visual cues. Tracking and recording of performances can be assisted by an automated tracking system such as the Noldus EthoVision XT.

Perform one trial per day in two blocks of 4 days testing, separated by 3 rest days. Trials are divided into three phases:

Place two identical stimuli in each of the goal arms. Release the subject from the start box by raising the guillotine door and closing it once the subject enters the maze. Terminate the trial if the subject has explored the stimulus for 15 seconds or 5 minutes have elapsed.

Following the sample phase, hold the subject in the transport box in the same testing rooms for delays of up to 20 minutes. For delays between 60 to 120 minutes, place the subject in its home cage in a holding room.

Following the delay period, place an identical third stimulus as used in the sample phase in one of the goal arms. Place a novel stimulus in the other arm. Release the subject from the start box by raising the guillotine door and closing it once the subject enters the maze. End trial when 3 minutes have elapsed and return the subject to its home cage.

Evaluation of the effects of hippocampal lesions on object recognition memory

Eighteen naive, male Lister Hooded rats with hippocampal lesion were evaluated for their performances on a modified Y-Maze. Hippocampal lesions were induced by ibotenic acid injections (10 mg/ml) at different rostrocaudal and dorsoventral levels. Another group underwent sham surgery and served as controls. Rats were evaluated in a spontaneous object recognition task with delays of 15 minutes, 1 hour, 24 hours, and 48 hours, using stimulus objects made of metal, ceramic, and plastic. The exploration amount did not differ significantly in both groups in the sample phase nor the choice phase. While delays did not affect exploration, its significant effect could be observed on the discrimination ration. While the time exploring the stimulus decreased with delays, both groups showed a preference for novel objects. Based on the observations, it was suggested that hippocampal lesions do not affect object recognition capabilities in the rats (Forwood, Winters, & Bussey, 2005).

Forwood, Bartko, Saksida, and Bussey (2007) evaluated recognition memory and perceptual oddity in naive adult male Lister hooded rats using a purely visual testing set-up. Performances were evaluated in the Oddity Apparatus and a modified Y-Maze using picture cards, 2D patterns, 2D shapes, and 3D objects as stimuli. Rats displayed robust novelty preferences during 2D picture pair tests when evaluated for recognition memory in the modified Y-Maze. However, when evaluated using 3D objects, rats displayed higher exploration levels as opposed to when tested using 2D pictures. In the Oddity Apparatus, subjects were observed to show a significantly higher preference for objects among all the stimuli sets tested. Among the 2D stimuli, photos were explored more than shapes and patterns, both of which were equally explored by the rats.

The following observations and parameters can be recorded in the Y-Maze task,

The modified Y-Maze apparatus allows the assessment of recognition memory in a purely visual domain. By eliminating other cues, the apparatus allows for a more precise assessment of recognition memory. Since the task doesn’t require any or minimal pretraining, testing can be initiated almost immediately. The inclusion of the guillotine door between the start box and the start arm allows the introduction of delays during the task while also reducing novelty stress. The apparatus uses high walls around all the arms, which ensures that the subject does not climb out of the apparatus in addition to eliminating access to any external visual cues. The goal arms offer the flexibility to use both objects and visual cue cards in the apparatus by simple replacement of the back wall. The design of the modified back wall for holding visual cue cards promotes exploration of the entire image. The apparatus does not require washing between trials or subjects since odor saturation does not influence the task.

Cleaning of the objects or other visual stimuli used is important to prevent any lingering odors from affecting explorative or choice behaviors in the subjects. Subjects performances may be influenced by their age, gender, and species. Since the modified Y-Maze task purely relies on vision, subjects with any vision-related impairments may not perform as expected.