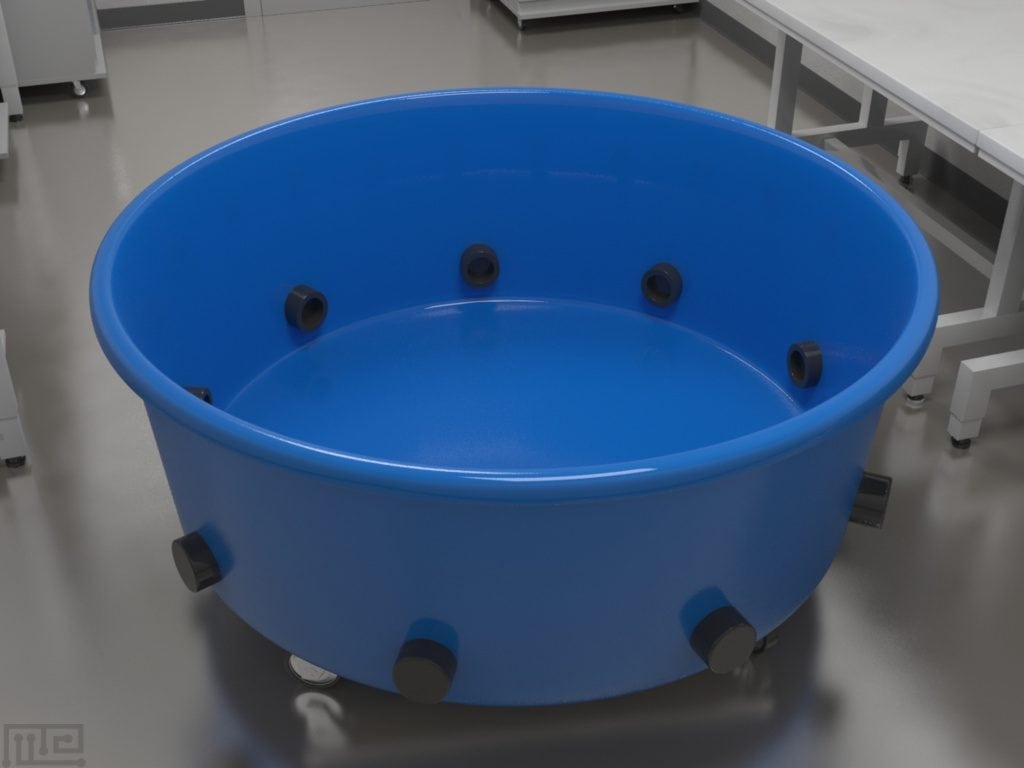 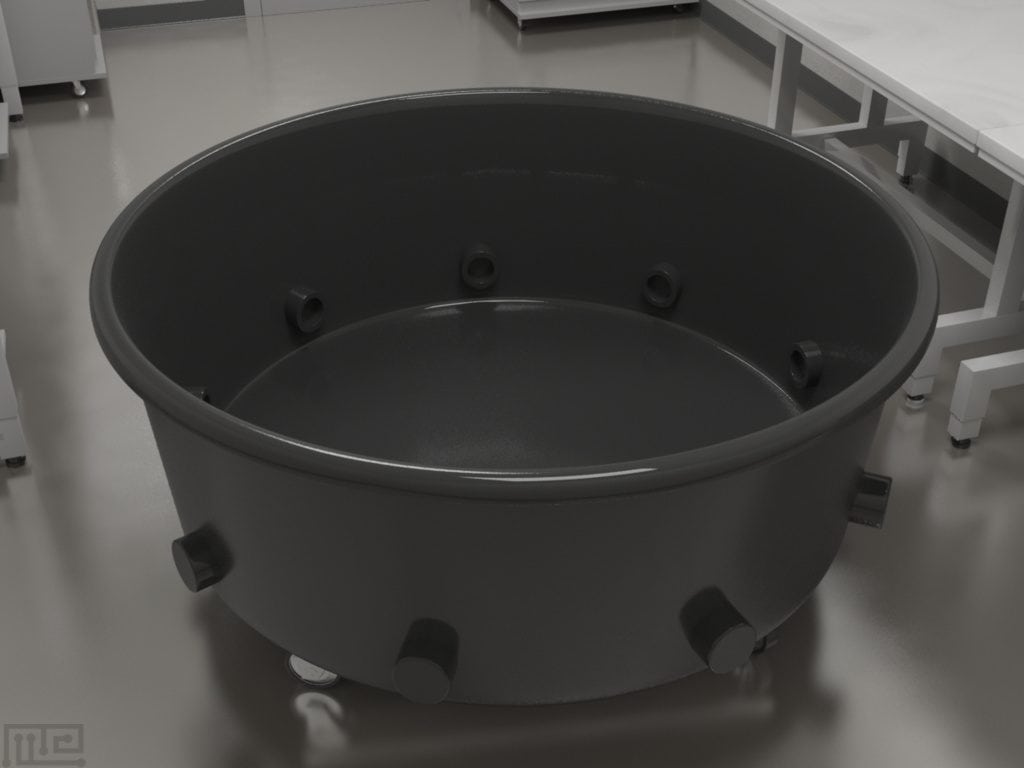 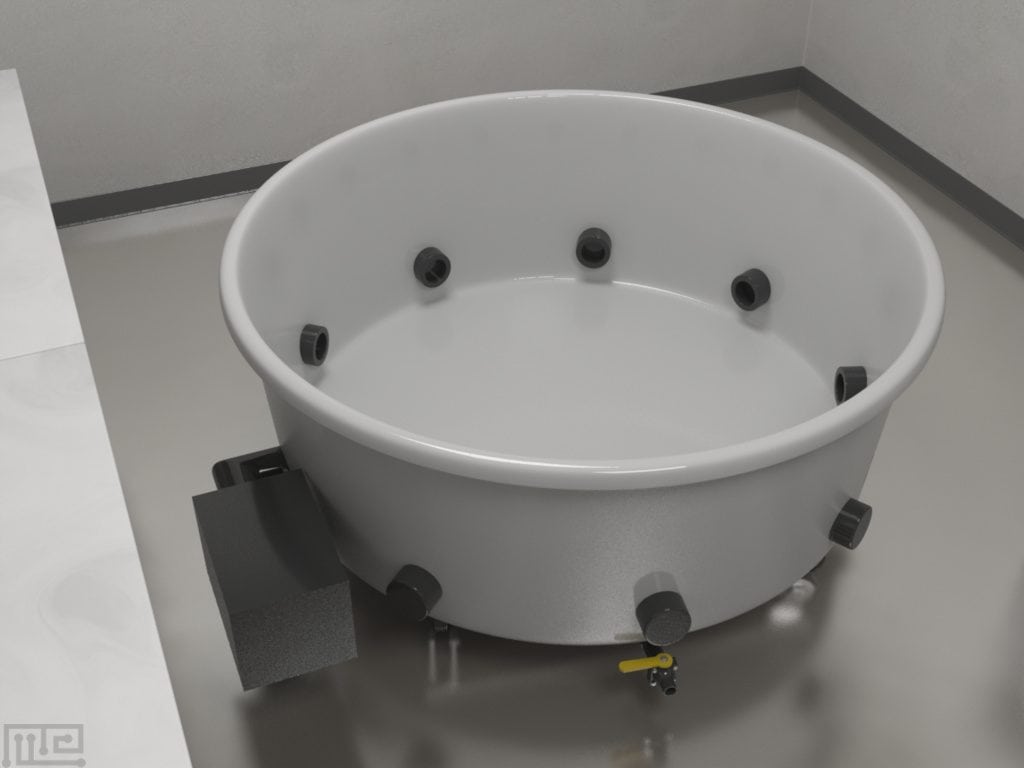 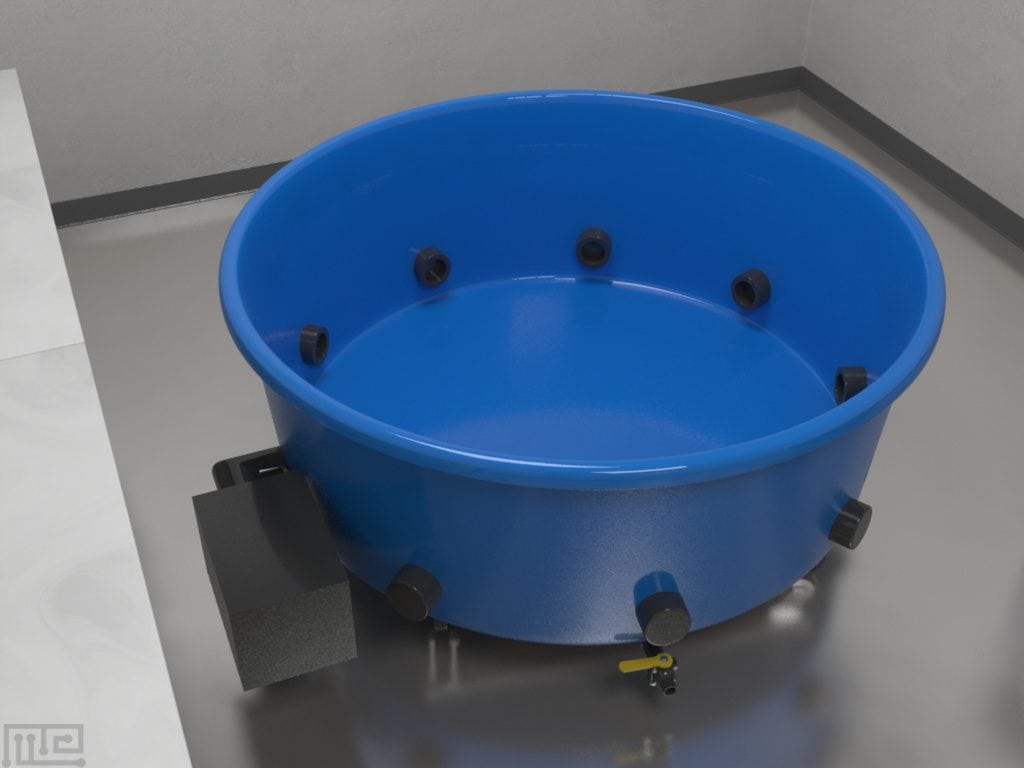 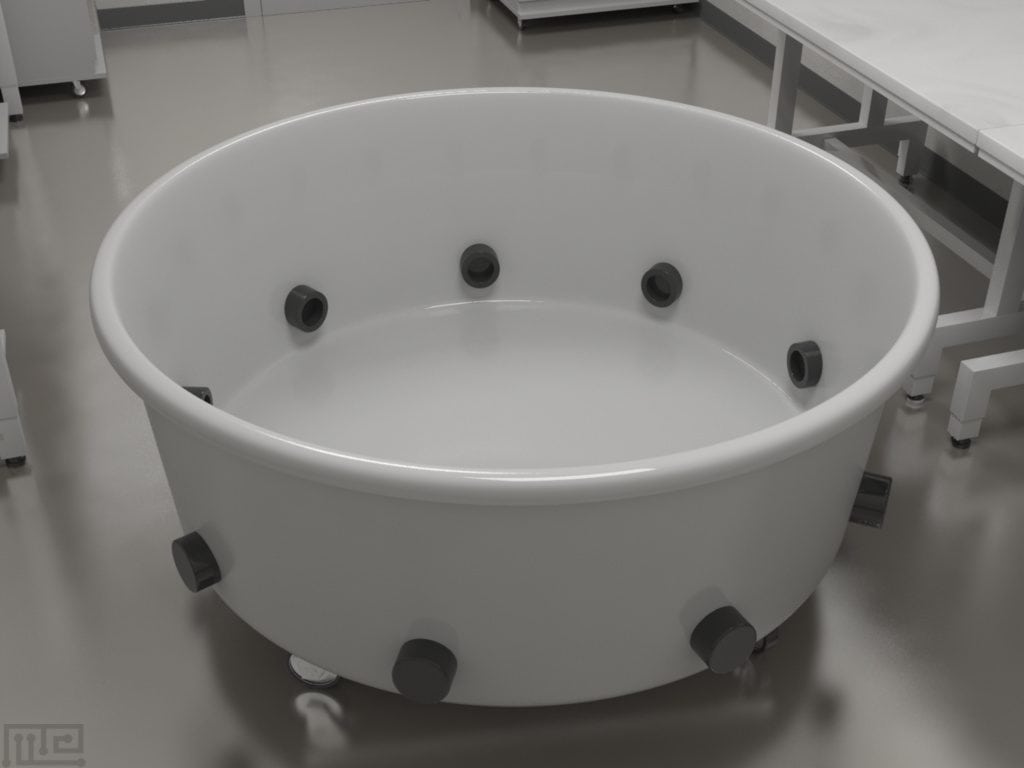 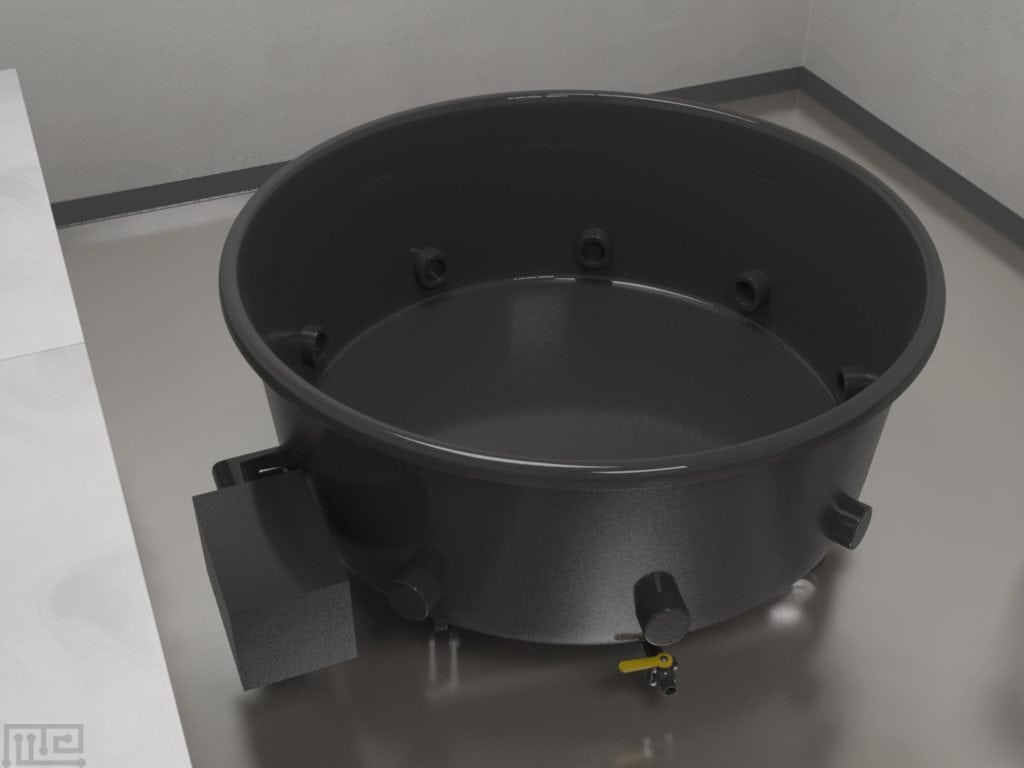 The  MazeEngineers Radial Water Tread Maze modification utilizes the MWM as a base.

Our modification of this maze comes with nine exits, each 1.5 in above the apparatus floor. Of these exits, eight terminate after 1 inch to serve as decoy exits.

We provide a single heated safety box with a 90 degree angle to prevent visual  pre escape cues. This box is sold separately to reduce cost and can be obtained A-la-carte.

Visual Cues can be provided upon request to place inside the apparatus for spatial navigation. The goal of the apparatus is to encourage the rodent to reach a food reward and warmth within the goal box.  Experimenters typically fill the tub with one inch of cold water (12–14 C) to motivate escape behavior.

The study of cognitive decline in humans due to age, traumatic brain injury, neurocognitive diseases and other such causes have been vastly aided by the development of rodent models in research. Swimming-based cognitive testing protocols such as the Morris Water Maze (Morris, 1984), which are currently at the forefront of assessing memory impairment and spatial cognition, present methodological concerns such as the possibility of impaired motor function and animal stress as confounding factors. In response to these limitations, the MWM radial water tread maze (Cline et al., 2017; Pettan-Brewer et al., 2013) provides an alternative to the traditional forced-swim model that reduces the physical demands of cognitive assessment.

In the RWT maze setup, water is maintained at a shallow depth but is made aversive enough through other means, such as cold temperatures or bright lighting, to motivate escape (Cline et al., 2017; Pettan-Brewer et al., 2013). Nine holes are placed around the tub at equal intervals, and five distinct visual cues line the sides of the apparatus. Only one out of the nine holes lead to a safety box, and the rest serve as decoy exits. The rodents are trained to tread shallow water and look for the single exit, using the visual stimuli as guide cues. In this manner, the effects of physical strain in the cognitive assessment are reduced. This less physically-demanding cognitive task successfully minimizes the potential influence of post-surgery sensorimotor changes or deficits that arise in rodents.

The radial water tread maze consists of an MWM tub with nine holes around the enclosure, each 1 and ½ inch above the apparatus floor, eight of which serve as decoy exits, terminating after one inch. One hole leads to a safety box fixed with a heating pad and food as reinforcers. The escape route and decoy-exits similarly extend to a passageway bent at a 90-degree angle, to prevent direct visual determination of the correct hole. The enclosure is also lined with five unique visual images that function as spatial cues to guide the animal’s search. The tub is filled with an inch of water. Based on the experimental protocol, the setup is either filled with cold water at 12 to 14 degrees Celsius (Cline et al., 2017) or fixed with a bright overhead light (Pettan-Brewer et al., 2013) that function as the aversive stimulus.

The initial training protocol introduces the subject to the radial water tread maze by placing it in the center and allowing it to look for the escape tunnel within a 180 s time limit in each trial. Once the subject reaches the correct exit, it is rewarded with food and allowed to stay in the safety box for 60 s. If the mouse fails to find the proper exit, it is brought to the safety box by hand and latency time is recorded at 180 s for that trial. If a subject enters a decoy exit and does not voluntary re-enter the maze after 5 seconds, it is put back in the center of the maze. If a subject consistently fails to complete the task within the 180 s time limit in any two-day period, it is considered insufficiently motivated and removed from the analysis. The subjects are given three trials per day during a four-day acquisition period.

On day 5 (the day after the acquisition period) and day 12 (a week after the acquisition period), the subjects are given a short-term memory test and long-term memory test, respectively, consisting of three trials. Latency time is recorded for each trial. Video tracking systems such as the Noldus Ethovision XT are also used to trace the path of the subject.

Plotting the latency time spent searching for the escape tunnel in each trial of the short-term and long-term memory tests on day 5 and day 12, respectively, represents the sample data. As seen from the graph, it took lesioned, or TBI (traumatic brain injury) subjects longer durations in reaching the proper exit. The significantly impaired performance of TBI mice compared to the control group suggests cognitive deficits in spatial cognition and memory.

Documented motor changes following controlled cortical impact or CCI-induced traumatic brain injury (Cline et al., 2017) necessitates the development of a cognitive assessment paradigm that can minimize physical strain on rodents, such as the radial water tread maze. The RWT maze successfully reduces the possibility of stress-induced test failure (Cline et al., 2017) by maintaining water depth at one inch, shallow enough that the subjects are not forced to swim and subjected to extensive distress. In addition, the current paradigm succeeds in employing the natural tendency of rodents to avoid open areas and explore the edges of an apparatus, a phenomenon known as thigmotaxis, in the assessment of cognitive ability.

Moreover, there are also some limitations to the RWT maze, including the possibility of hypothermia as a confounding factor often associated with water maze setups that require cold water as an aversive stimulus. This issue would require the collection of additional temperature data of each rodent before and after trials. Another potential concern for some rodents is the insufficiency of motivation presented by the testing conditions, resulting to nonparticipation in the testing protocol.