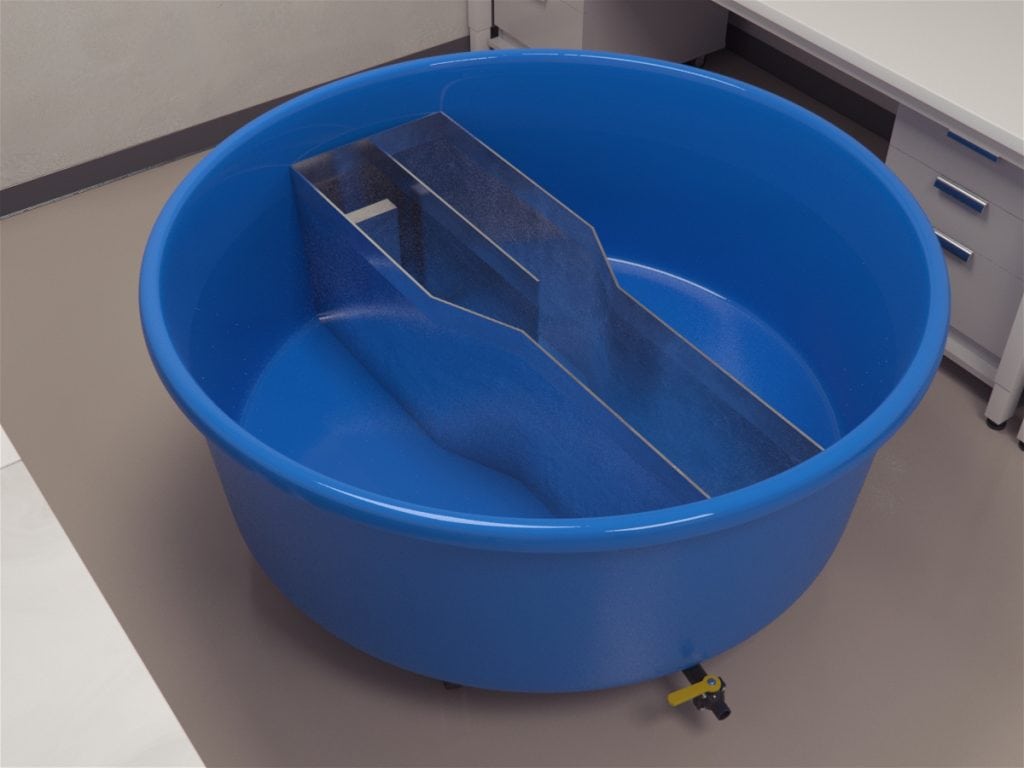 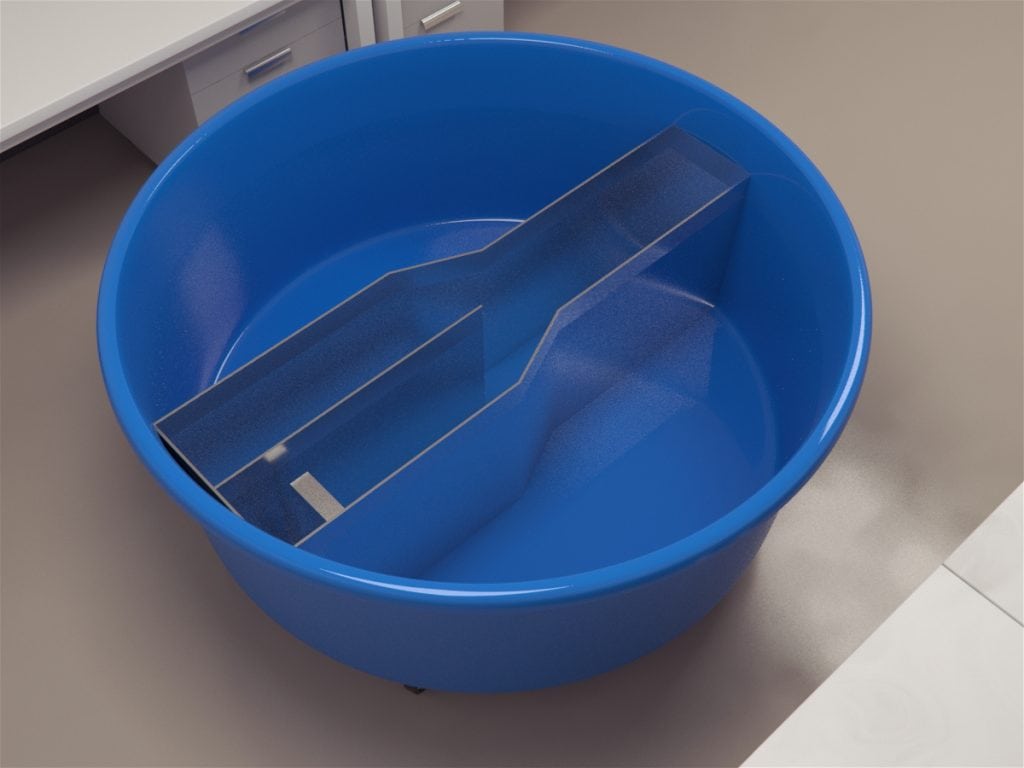 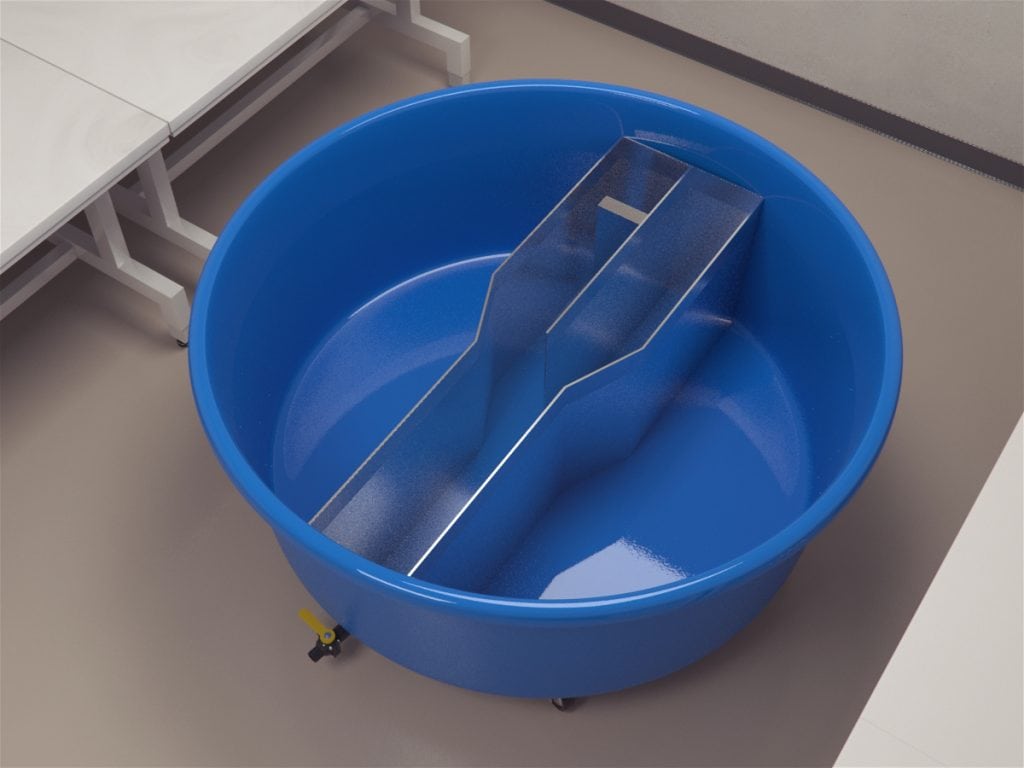 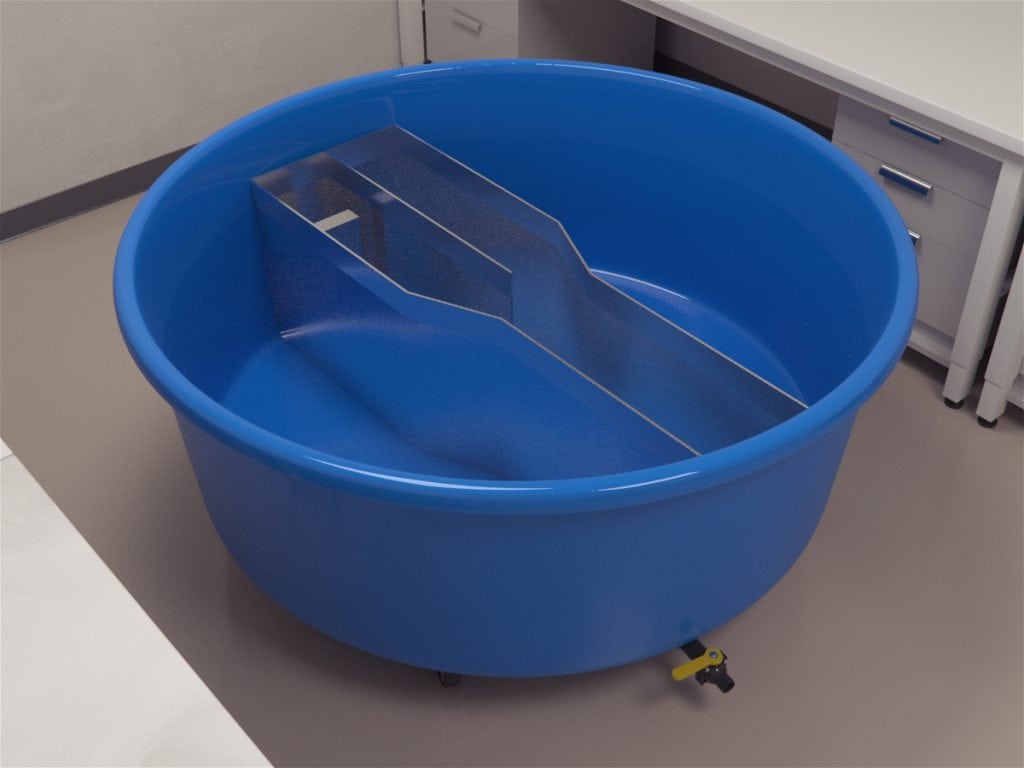 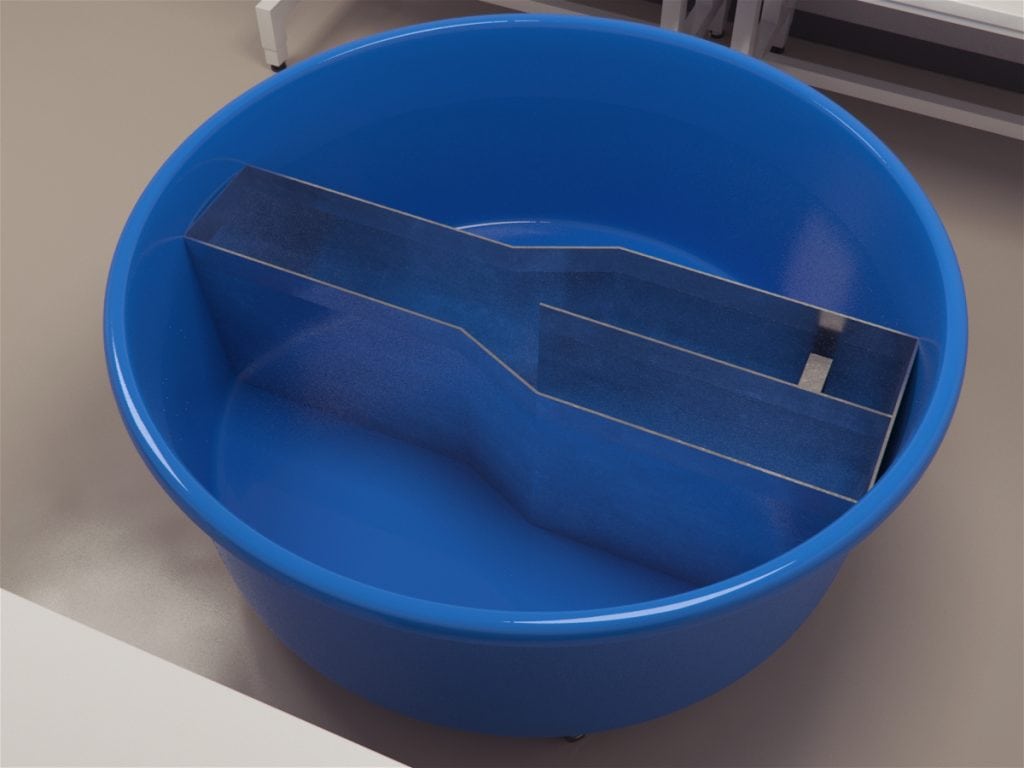 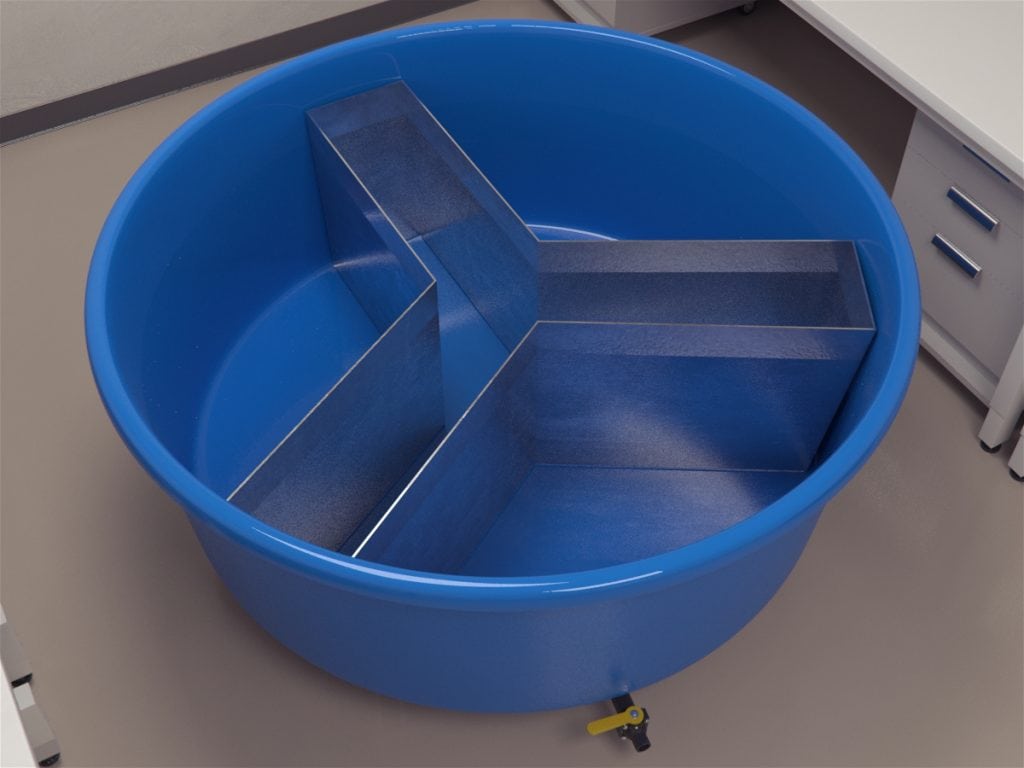 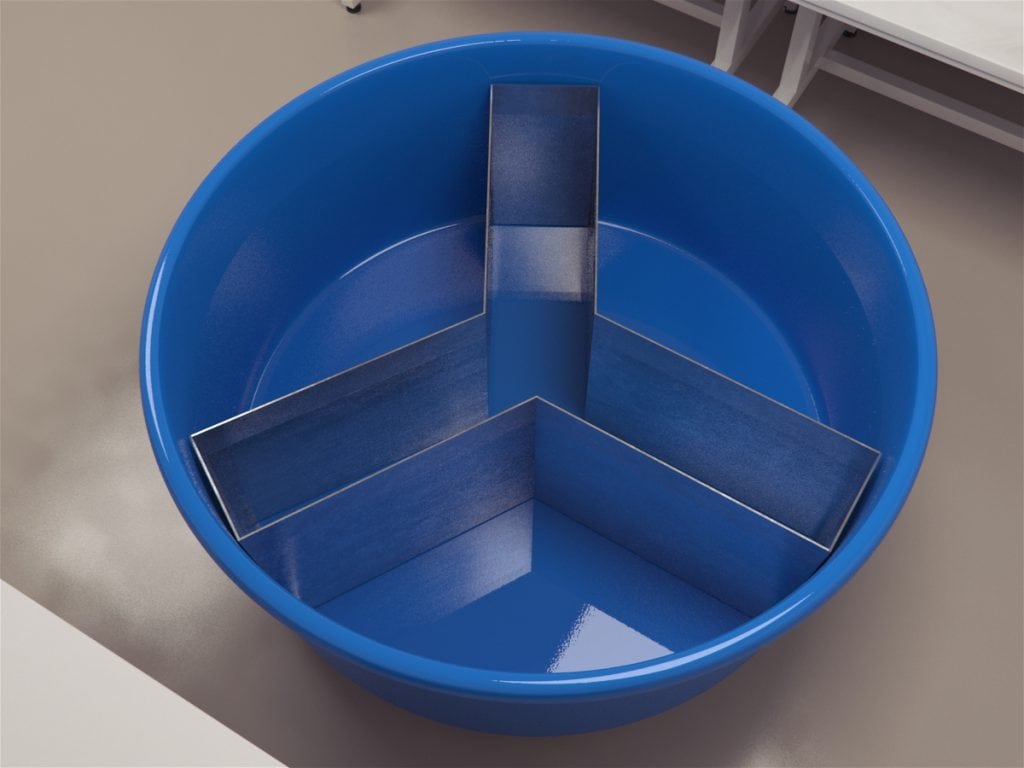 The Y maze for the Morris Water Maze is made to fit the 4 foot, 5 foot, or 6 foot sizing for the MazeEngineers Morris Water Maze. Made of acrylic with dark insert between the choice arms allows for visual discrimination training in mice and rats.

One of the many reliable paradigms used for the study of learning and memory in rodents is the straightforward design of the Y-maze. Very similar to the T-maze, The Y-maze likewise offers plain testing of spatial learning and working memory by allowing rodents a simple choice of left or right, aided by visual and other experimental cues. Some reported advantages of the Y-maze’s design over that of the T-maze is its more natural structure, with smooth 120-degree arm transitions instead of sharp 90-degree turns.

A clever modification of the Morris water maze (Morris, 1984) involves the addition of a Y-maze insert, creatively combining the strengths of both experimental paradigms. With the usage of a Morris water maze containing a Y-maze insert, rodents may efficiently be trained to reach an escape platform hidden in the opaque water, instead of the more traditionally used food reward, by successfully choosing between one of two goal arms.

The MWM Y-maze insert provides various possibilities in testing procedures for spatial learning, such as visual discrimination between two learned cues, memory acquisition and retrieval, and other spatial reference memory tasks. The apparatus simplifies the spatial task by offering only two possibilities for the rodent, and in this manner, the spatial behavior is conveniently analyzed.

The Y-maze insert follows a Y-shape design, with three long arms in 120-degree angles from each other. The insert is fitted snugly in a round tub to be filled with opaque water achieved through nontoxic materials such as watercolor paint or powdered milk. The dimensions of each arm range from 30 to 50 cm in length and 10 cm in width to accommodate the regular-sized rodent.

A removable escape platform is placed in one of the three interchangeable goal arms, submerged about 2 cm below the surface of the water. Guillotine-like doors may be added to the apparatus to facilitate learning in pre-training, or as well in restricting the rodent within its starting position in one of the three maze arms during testing. Depending on the chosen experimental protocol, distinct visual cues may be mounted above the two goal arms displayed above the water line, within the rodent’s visual field. The data on rodent trajectories is achieved through the use of a video tracking software such as Noldus Ethovision XT.

A visual discrimination task is one common application of the MWM Y-maze insert. Like all maze procedures, animals undergo a rigorous bout of pretraining, modified according to the adapted research paradigm. Before experimental assessments, animals are introduced to the apparatus and acclimated with the water maze procedures.

In the experimental context of visual discrimination, rodents are trained to associate visual cues with the location of the escape platform, placed in either one of two possible goal arms (Gagolewicz et al., 2011). Two distinct visual cues, such as black horizontal and vertical bars, are prepared beforehand and mounted atop the two Y-maze goal arms within the rodent’s visual field.

The first phase of MWM Y-maze training serves to familiarize animals with swimming in the water maze and training to locate the hidden platform as their primary goal. During the preliminary stage, no visual cues are presented. Rodents are released onto the maze and are allowed to traverse in search of the escape platform in the goal arm. The subjects that failed to find the escape platform within 200s are guided to the platform manually. Correct and incorrect trials are recorded.

In the second phase of training, the same process is followed but with the addition of the two distinct visual cues. Rodents are trained to associate one visual cue with the presence of the platform (marked as P+), and another with its absence (marked as P–). The third/final phase of visual discrimination training involves the addition of random assignment with respect to the location of the goal arm.

Correct arm entries may be recorded manually or through Noldus Ethovision XT.

Behavioral Training as the Experimental Variable

In the context of visual discrimination training used as the experimental variable, such as in Gagolewicz et al’s (2011) study of the effects of visual discrimination training in long-term potentiation (LTP), rodents may undergo consistent association of visual cues, or an alternating presentation of cues, with the latter procedure eliminating any success for visually-guided learned behavior. These protocols depend on the rodents’ assigned groups, whether control or experimental.

The behavioral training used with the MWM Y-maze task has contributions in the study of learning and memory, specifically its implications for particular neural mechanisms such as synaptic enhancements (Gagolewicz et al., 2011).

The MWM Y-maze insert may also be used for experimental paradigms adopted by traditional Y- or T-mazes, such as the effects of exercise on memory acquisition and retrieval (Van der Borght et al, 2007), in which spatial learning and memory are assessed through the largely straightforward premise of choosing between one of two alleyways.

Effects of Exercise on Y-maze Discrimination

The MWM Y-maze insert offers easier training procedures for the rodents, compared with traditional Y- or T-mazes. In non-aquatic mazes, animals are typically tested and reinforced with the usage of a food reward, thereby necessitating food deprivation at least a day prior to testing for such a reinforcer. Meanwhile, the usage of a removable escape platform with the MWM Y-maze insert provides economic and practical advantages with regard to research procedures and materials.