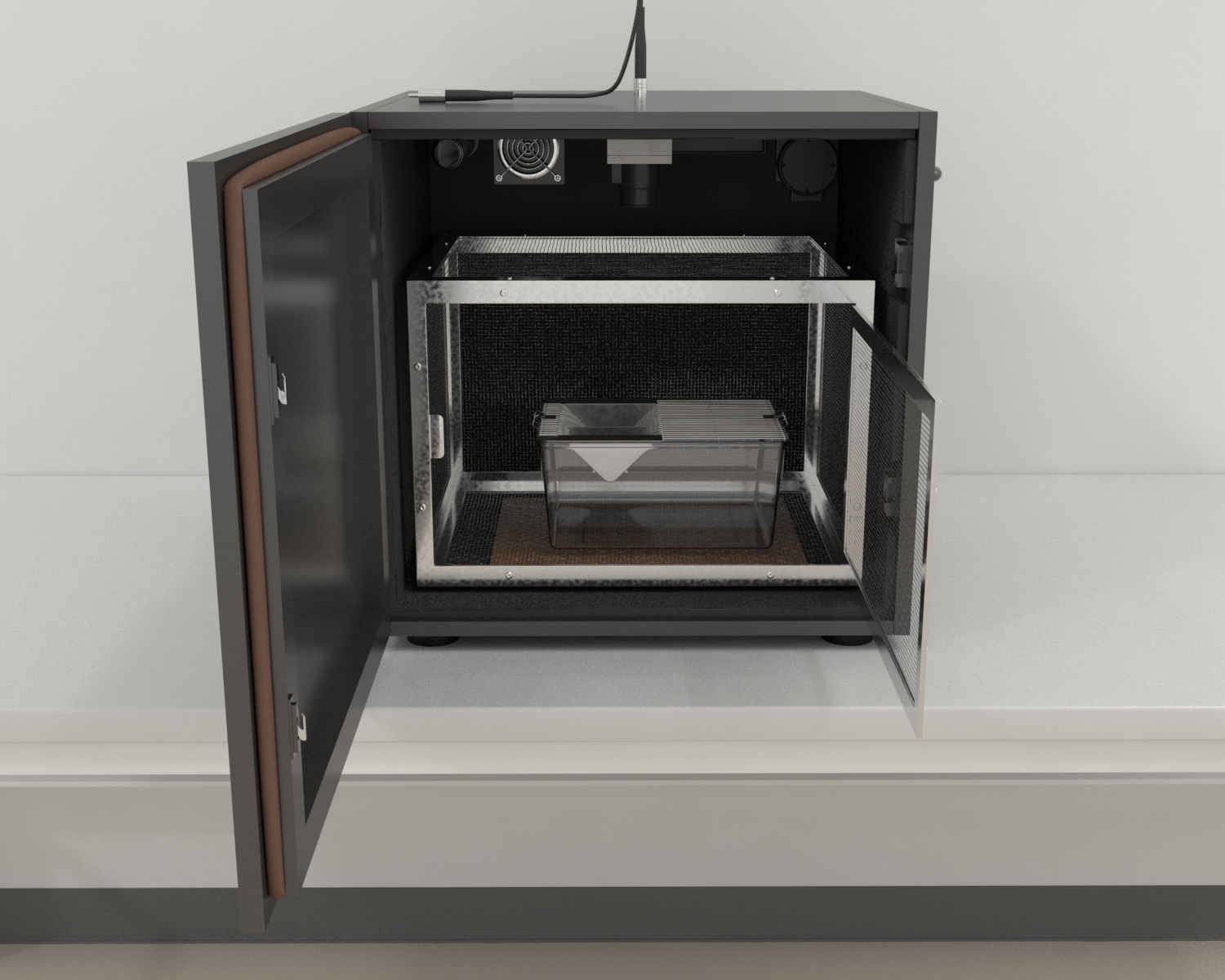 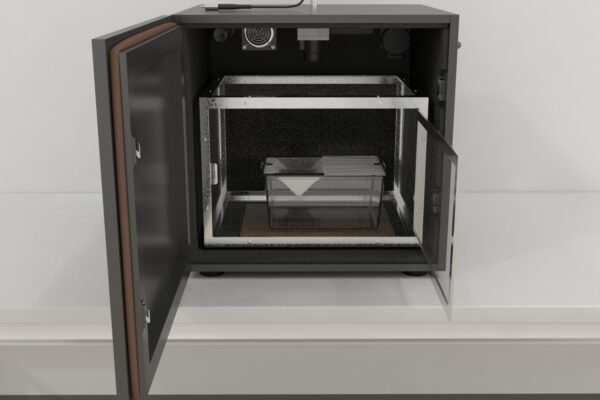 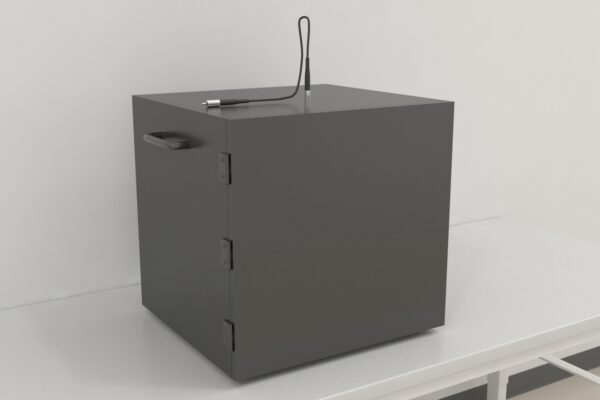 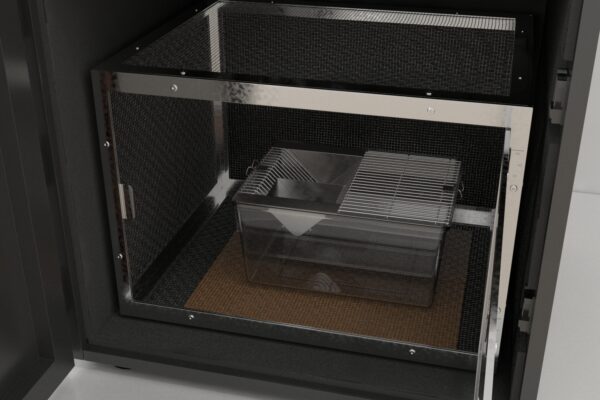 Integration with Conductor allows for access to Noldus Ethovision control.

Auditory Brainstem Response (ABR) testing was first performed in humans by Jewett and Williston in the late 1900s (Jewett & Williston, 1971). The test is used in the research and diagnosis of neural disorders and hearing sensitivity (Galambos, & Hecox, 1978; Sohmer, Freeman, Friedman, & Lidan, 1991). In animal research, auditory stimuli are common in many behavioral assays and protocols, such as the Fear Conditioning Assay and Sociability Chamber. Differences in hearing sensitivities within the tested cohort, thus, can have a significant impact on the behaviors of the tested animals and the observed results. While, in animals, vocalization may not be the primary form of communication, in humans, voice communication plays an important role in the quality of life.

Auditory brainstem responses are evoked potentials recorded using electrodes placed close to the scalp of the subject. On presentation of sound stimuli, the auditory brainstem pathways, which include the cochlear ganglion neurons and subsequent fiber tracts and nuclei, produce electric responses that can be used to gain insights into the integrity of these neural structures. The recorded ABR consists of five identifiable waveform components labeled as I to V, which reveal the activation of the auditory nerve and the transmission of the sound through the brainstem pathway.

The following procedure describes how to set-up your TDT system 3 with TDT WS8 or WS4 Computer Workstation and associated hardware for ABR testing and recording.

The following protocol considers a mouse as the subject. The protocol can be applied to other small rodents as well.

Note: Ketamine and xylazine solution provides stable ABR thresholds in comparison to other methods of anesthetization.

The possibility of hearing loss as an early biomarker of Alzheimer’s disease was evaluated using APP/PS1 AD mice with wild-type littermates as controls. In addition to ABR testing, mice also underwent distortion product otoacoustic emission (DPOAE) and cochlear microphonics (CM) recordings. ABR recordings were performed monthly starting at postnatal day 60 to evaluate progressive changes and early occurrence of hearing loss. The testing was performed with clicks and a series of tone bursts with frequencies between 4 to 40 kHz, sound pressure intervals (SPI) in steps of 5 dB from 10 to 80 dB using a high-frequency speaker. For mice with severe hearing loss, sound pressure intervals range of 70 to 100 dB were used. A significant increase (10−20 dB SPL) in the ABR thresholds was observed in APP/PS1 AD mice in comparison to the wild-types. At 40 kHz, the ABR thresholds increased by approximately 20 dB SPL in APP/PS1 AD mice. Hearing loss was also observed to be progressive and age-based. Comparison between the two groups revealed APP/PS1 mice to display hearing loss as early as two months old at high frequency. These mice also had reduced DPOAE, though no reduction in CM could be observed. (Liu et al., 2020)

Prior to being submitted to ABR testing, Male and female 5xFAD mice and their wild-type counterparts were evaluated for their acoustic startle and pre-pulse inhibition (see Acoustic Startle Chamber). An age-related decline in acoustic startle responses was observed for 5xFAD mice. Following the acoustic startle testing, mice were subjected to ABR testing in age-grouped cohorts of mixed sexes; a 3-4 months group and a 13-14 months group. Testing was performed using tone bursts stimuli of 2, 4, 8, 16, and 32 kHz, 10 ms duration, and 1 ms rise/fall time using a loudspeaker. Tones were presented with an SPL of 5 dB, in descending sequence from 90 dB for each frequency. Thresholds were determined based on the repeatable III wave in ABR at the lowest sound level. Each ABR testing session lasted about 45 minutes. While no genotype differences could be observed for 3-4 months old mice, a significant effect of stimulus frequency could be seen. The 5xFAD mice displayed higher thresholds than the WT at 13 to 14 months of age, with an average ABR threshold of 82.2+/-4.8 dB in comparison to the 55.4+/-6.5 dB for WT mice. Additionally, it was observed that at frequencies of 8, 16, and 32 kHz, the auditory thresholds of the 5xFAD mice were significantly higher than the WT group. While an increase in auditory threshold with age for WT was only observed at 2 and 4 kHz, the mouse model displayed an increase for all frequencies. Together with the results of cochlear morphology, it was confirmed that the aged 5xFAD mice presented significant peripheral hearing loss. (O’Leary et al., 2017)

Investigation of the effect of Sap B deficiency on hearing

The study was conducted using C57BL/6J Sap B KO (B-/-) mice backcrossed to an FVB (Friend leukemia virus, strain B) strain to the 10th generation. The B-/- mice, Heterozygote (Het), and wild-type (WT) littermates (P1mo–P15mo) were subjected to Auditory Brainstem Response testing to determine the effect of Sap B deficiency on hearing in this progressive neuronal degeneration model. Mice were tested using clicks (5 ms duration, 31 Hz) and tone pips at 8, 16, and 32 kHz (10 ms duration, cos2 shaping, 21 Hz) at ages P1mo, P3mo, P4mo, P6mo, P8mo, P13mo, and P15mo. Electroencephalographic (EEG) activity was recorded for each stimulus for 20 ms (at a sampling rate of 25 kHz) and filtered (0.3–3 kHz). 512 stimuli and 1000 stimuli were averaged from the waveforms for click stimuli and frequency-specific tone pips, respectively. The Auditory Brainstem Responses were recorded down from the maximum amplitude in SPL of 5 dB. No significant differences in ABR thresholds were observed between the three cohorts at age P4mo; however, an increase in ABR thresholds for tone-burst stimuli only was observed in B-/- mice in comparison to the other two groups at P8mo. Further, no significant difference in thresholds could be observed for WT versus B-/- mice in click stimuli until P13mo, though significant threshold shifts for pure-tone stimuli were observed starting at P6mo. While no significant difference in ABR wave I amplitude for click stimulus could be seen at Pmo4, however, by P8mo, B-/- mice had a significant decrease in ABR amplitude in comparison to WT counterparts. Comparison of ABR interpeak latency between P1 and P2 at varying time points revealed that B-/- mice displayed significant P2-P1 delays for tone stimuli at P8mo. (Akil et al., 2015)

Data analysis in Auditory Brainstem Responses is based on the analysis of the five identifiable waveforms. The following data and analysis are performed: