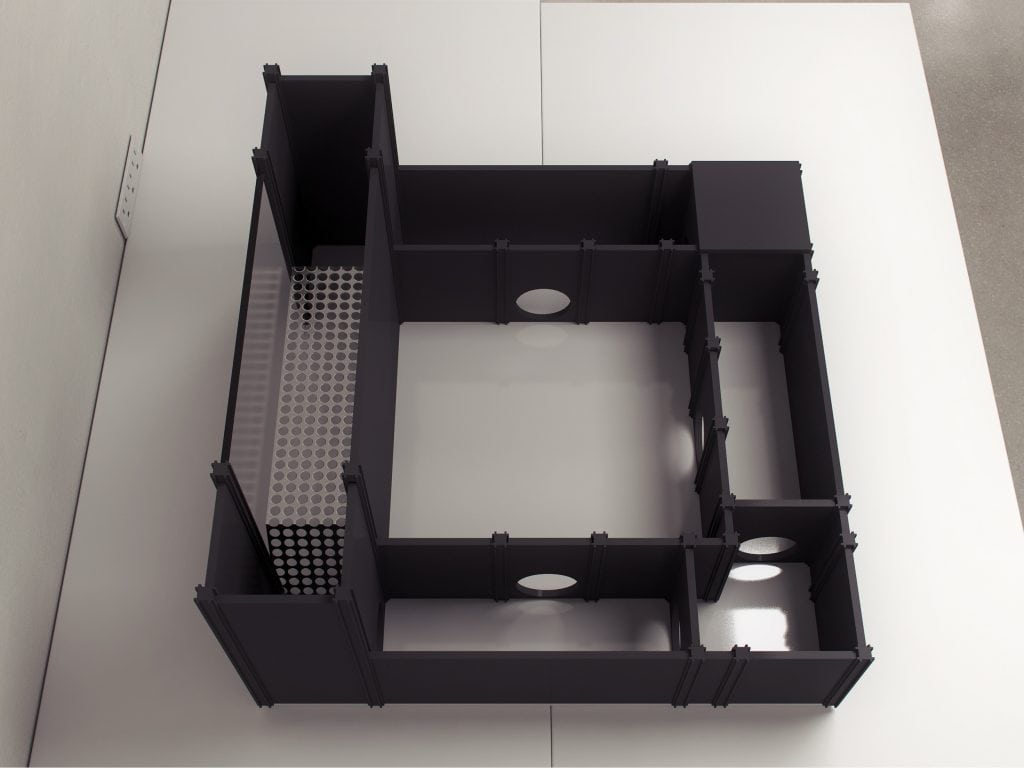 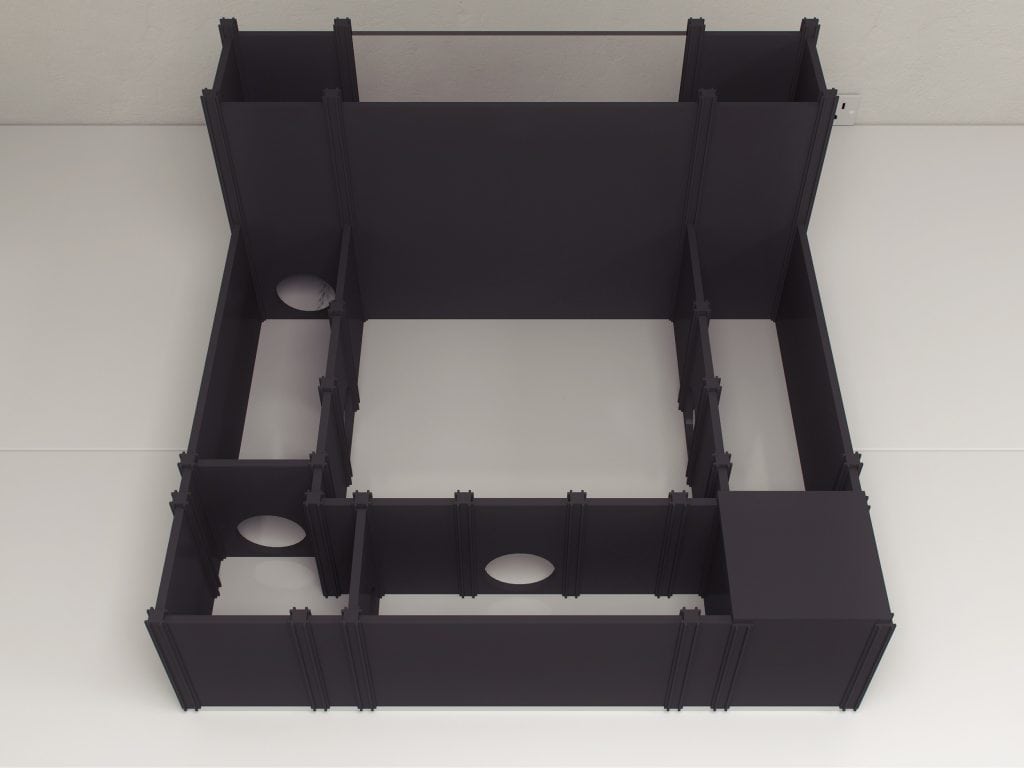 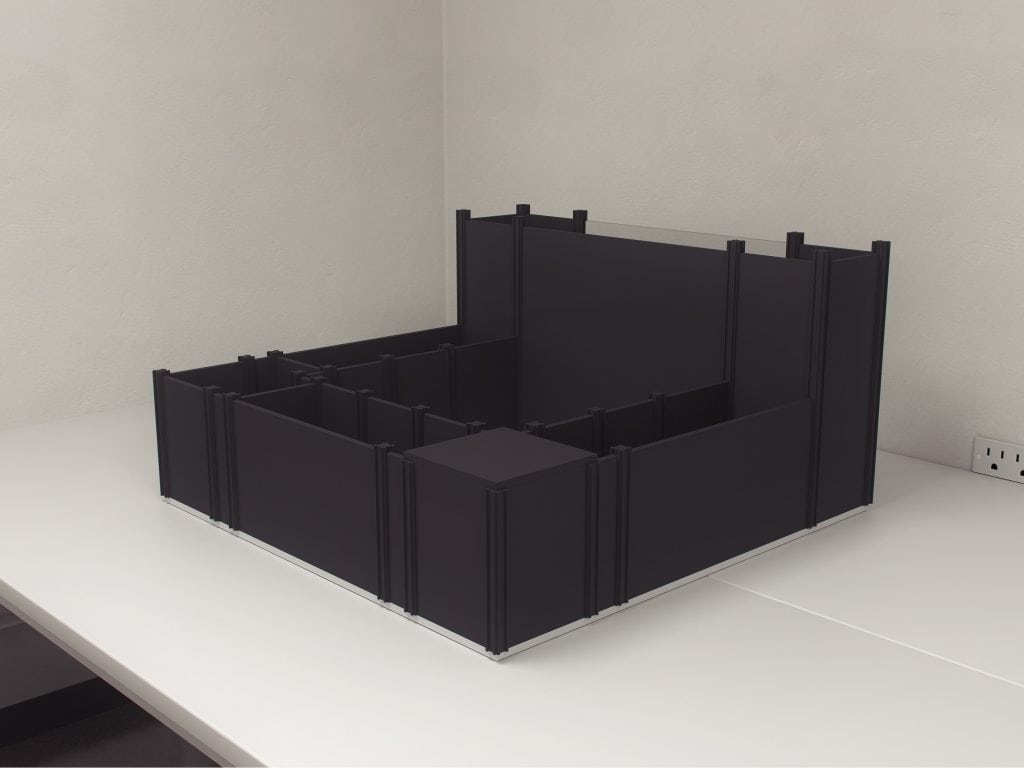 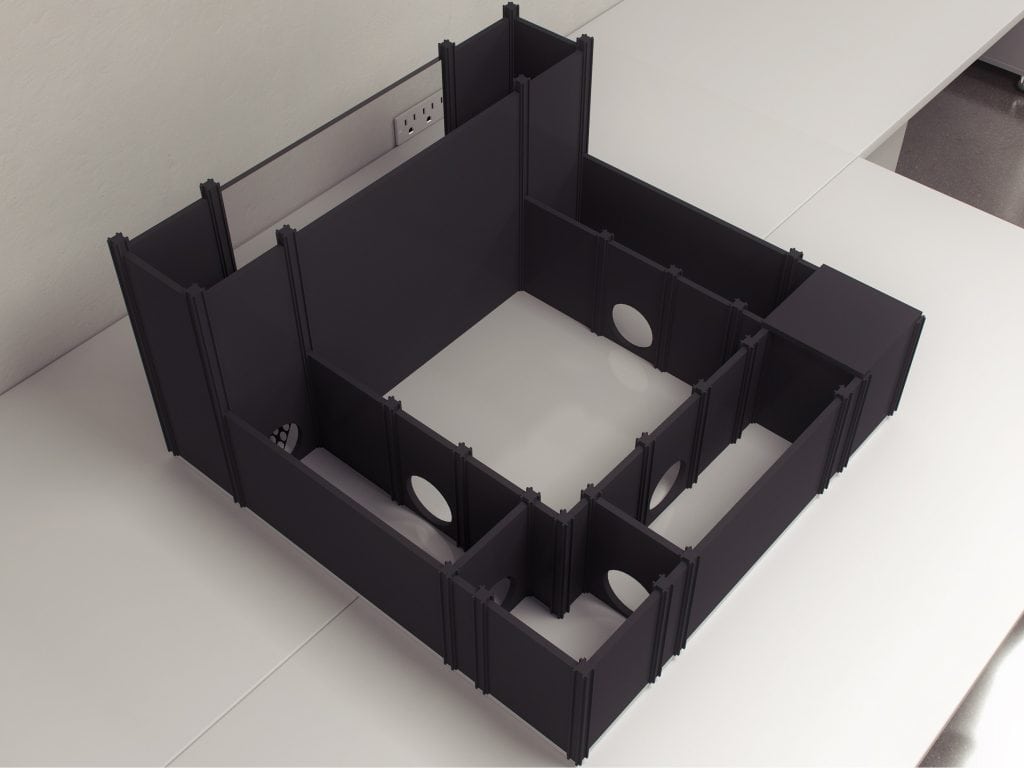 The MCSF was originally described in the literature by Meyerson et al., 2006, for rats and later adopted by Ekmark-Lewen for mice. The behavioral model provides several areas for the animal to explore by free choice, including sheltered, open, and elevated areas. It also includes a holeboard device; and areas with differential lighting.

The device can be automated with IR detection in order to detect location, or can be done manually. If automated two cells are located in the arena in the arena, one between the SLOPE and BRIDGE areas, detects BRIDGE entrance. The second photocell device was located under the holeboard floor of the HURDLE, which gives recording of head dips.

The Multivariate Concentric Square Field (MCSF) is a novel behavior model developed for investigation of risk assessment, anxiety, and shelter seeking behavior in rodents. The MCSF arena was developed by Meyerson et al., 2006 as an attempt to create an environment that could closely mimic the natural settings of rats and allow them to explore different environments within the apparatus during the same session. Unlike other tasks, the MCSF test is based on forced exploration wherein the subject is released directly into the arena. By doing so, the subject is introduced to an inescapable novelty that evokes risk performance. The apparatus was later on adapted for studies using mice by Ekmark- Lewén et al., 2010.

The MCSF arena consists of different areas such open spaces, sheltered spaces, and enriched explorative areas to provide the subject with multiple environments of explorations. By including items and environments that evoke risk, the explorative strategies are influenced by the subject’s risk and benefit assessment and the subsequent risk acceptance and risk avoidance. Apart from the mentioned assessment, the apparatus also assists in investigating anxiety-related behaviors and in understanding cognitive impairments associated with traumatic brain injuries, neuropsychiatric and neurodegenerative disorders.

The MCSF can be seen as a combination of various other behavioral test apparatus which makes it an interesting apparatus in the field of behavioral research. The apparatus successfully allows investigation of different variables within the same apparatus during the same session. As with any behavioral test battery, it is important to understand that behavioral task should take into consideration the subject’s emotional and motivational mental state.

The MCSF apparatus is a square field measuring 72 x 72 cm and is surrounded by an outer wall of height 25 to 28 cm. The apparatus is divided into a central square arena of 40 x 40 cm and peripheral corridors of width 15 cm by inner walls.

Central arena: The central arena includes a circular zone of diameter 16 cm. The arena opens up to the corridors via openings (Corridor A, 10 cm wide opening, and Corridors B and C, circular openings of diameter 8 cm, placed 2.5 cm above floor) in the middle of the dividing walls.

Corridors: There are three corridors present in the field. The corner between corridors A and B is closed off by walls and covered to provide a dark corner room (DCR) of size 18 x 18 cm, which is accessible through corridor A. The other end of corridor A is closed off.

Corridors B and C formed another corner room containing hole board (two holes of 2.5 cm each) floor elevated 6 cm from the corridor floor. This HURDLE corner measures 18 x 18 cm and is accessible from corridor B and C through an opening of 8 cm wide situated 10 cm and 8 cm respectively from the corridor entrances above the floor. A photocell device placed under the hole board allows recording of head-dips into the holes.

Corridor D consists of a stainless-steel wire mesh (40 x 15 cm, 15 mm between bars) that serves as a bridge over an illuminated opening in the floor. Either end of the bridge has an ascending slope of 15 x 15 cm at an angle of 45 degrees from the arena floor that is illuminated. The access to the bridge is through corridor C where the slope is covered. Another photocell device can be placed between the slope and bridge areas to measure activities on the border of the bridge entrances.

The MCSF arena constitutes 12 zones of exploration. The observation of the task is carried out using a ceiling mounted video and tracking software, such as Noldus Ethovision XT. Before the start of every trial, the entire apparatus is thoroughly cleaned with a dilute solution of ethanol. It is also ensured that the lighting is optimized as per the zones. The subjects are carried to the arena in a carrier bucket from their home cage. Usually, the experiment is initiated by placing the subject in the central arena. The recording is started immediately, and the session lasts for at least 20 minutes.

Pre-training of the subjects is dependent on the behavioral variable to be investigated. Usually, there is no pre-training required for the MCSF task. For task requiring food deprivation, the subject is deprived of food 48 hours’ prior the experiment. The task can also be carried out for testing the effects of restrained stress and social dominance.

Evaluation of the response to novel environment of the MCSF

Meyerson et al., 2006 observed that during the session, the subjects visited all the zones indicating that all areas had explorative value. The explorative behavior declined towards the end of the trial. The subjects during this trial are seen spending more time in the central arena, the DCR and the corridors in comparison to the rest of the zones.

The subject is carried to the maze in a carrier bucket and placed on the central circular platform of the central arena facing the wall with no openings. Two experiments are carried out to investigate the areas that would be associated with risk and safety by the subjects. The first experiment made use of lactating female rodents in a pup retrieval task. The females are tested under two different conditions- pups placed at the end of the bridge opposite the entrance slope and pups placed in the dark corner room. During this task, all the females carried the pups to the DCR, however, in the later condition no retrieval occurred (Meyerson et al., 2006).

The second experiment involved male subjects deprived of food 48 hours’ prior the experiment. Food pellets are placed on the bridge or in the DCR. In both the situations, the animals consumed the food in the DCR, but no consumption took place on the bridge (Meyerson et al., 2006).

After the recovery period, the subjects with cortical impact are carried in a ventilated wagon from their home cage to the test arena. The subject is given 45 minutes to acclimate to the test area. The lights in the arena are dimmed except for the lights under the bridge. The test begins by placing the subject, facing the wall with no openings, in the central arena. The subject is allowed to explore the field for 20 minutes during which an investigator blind to the experimental conditions made observations. The experiment is repeated with sham and naïve groups that served as a comparison for the results (Ekmark- Lewén et al., 2010).

Data can be collected for the following

The subject is said to have entered a defined zone only when all its limbs are within the zone. Other data that can be recorded are rearing, grooming and the number of head dips in the hurdle area.

The following is a sample graph for shelter seeking behavior seen in subjects with traumatic brain injury in comparison to the sham group.

Another sample graph compares the risk-taking ability of traumatic brain injury group and the sham group.

The Multivariate Concentric Square Field aids in the investigation of risk-related behavior in rodents by using a multivariate setting. The different zones of the arena provide different levels of risk and safety. The bridge, in particular, is seen as a risky zone by rodents while the dark corner room is considered a safe area. The MCSF allows investigation of the different variables of behavioral testing within the same apparatus in the same session. This eliminates the need for using different behavioral test batteries to test specific stimulus, perception, cognition or locomotor functions. Unlike other tasks, the MCSF does not require pre-training. The task, in contrast to other tests, relies on forced exploration which does not influence the innate behavior of the rodent as would the other task that depend on the animal to initiate exploration from a familiar space to a novel space.

The complexity of possible observations in the MCSF may make it a tricky task to collect data. The apparatus needs to be thoroughly cleaned between each trial to avoid any remnant stimuli from interfering in the preceding trials. The lighting of the arena is also a crucial factor that can influence the test results. Apart from these concerns, the subject’s own mental state also plays an important role in the collection of accurate data.