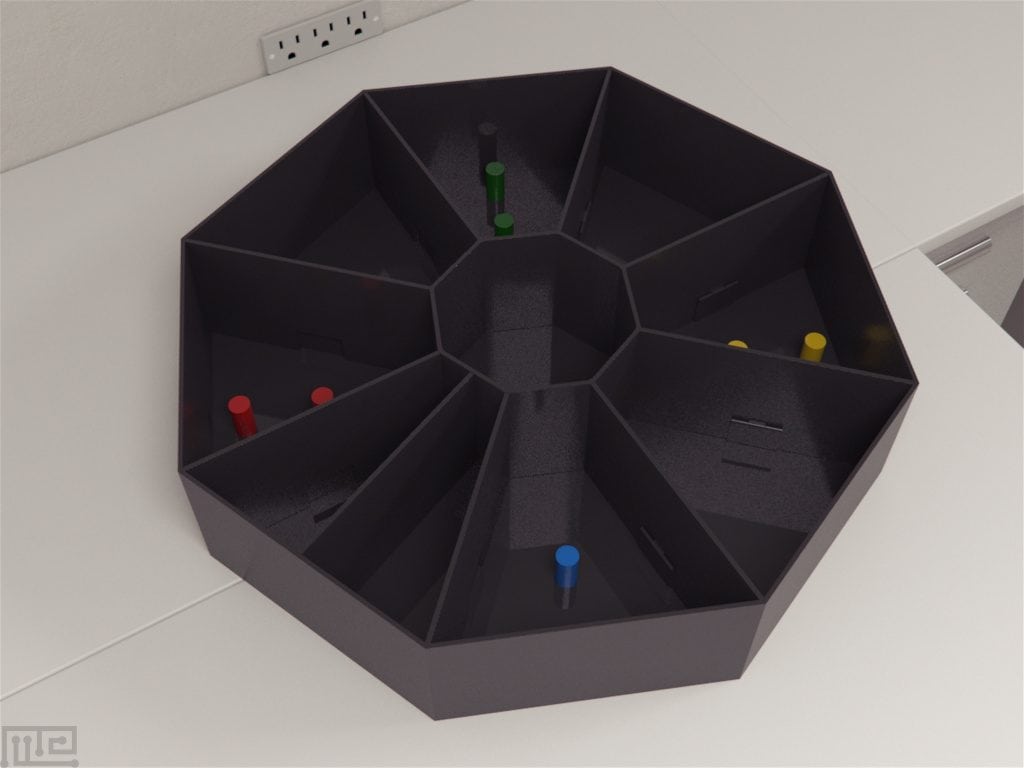 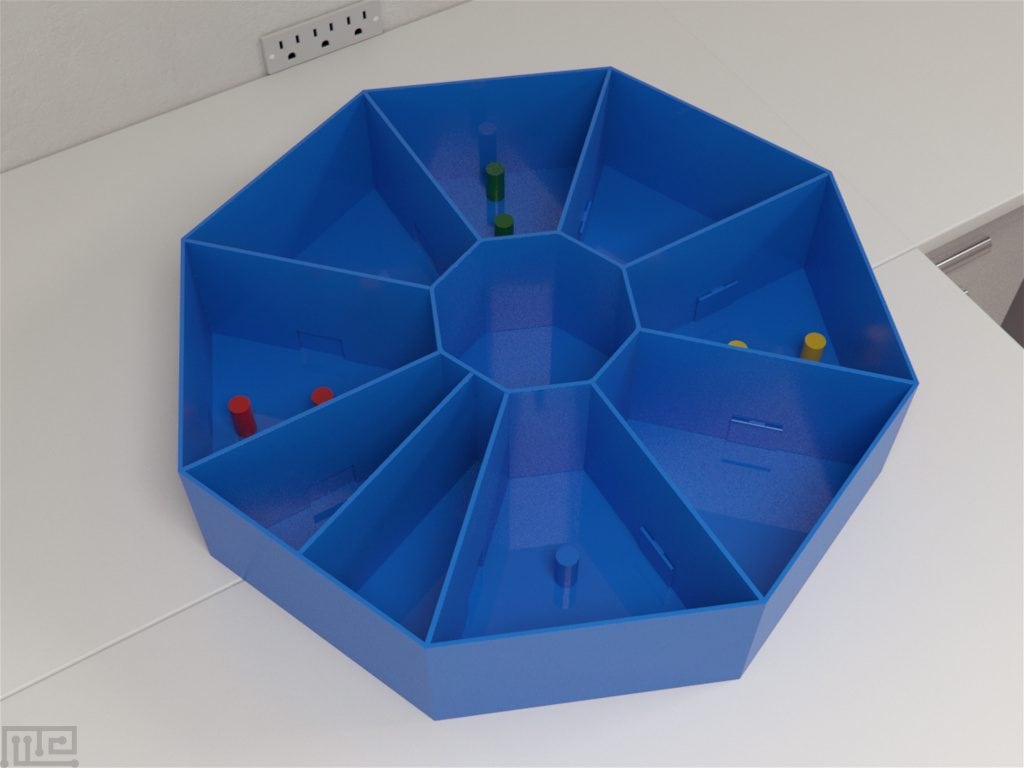 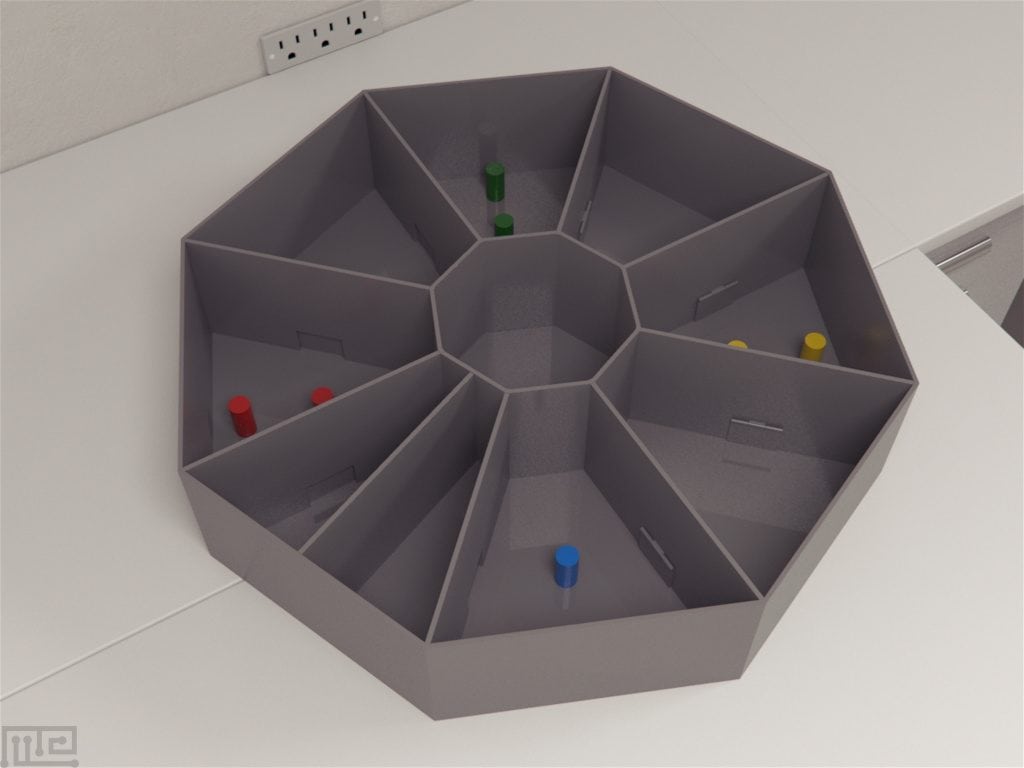 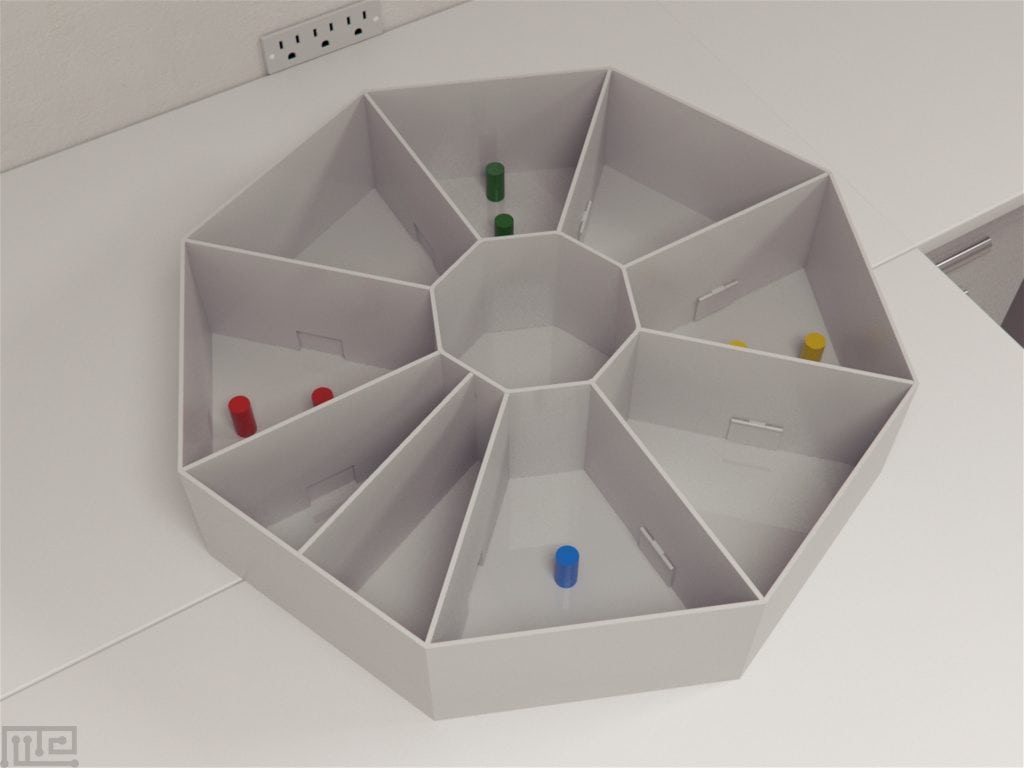 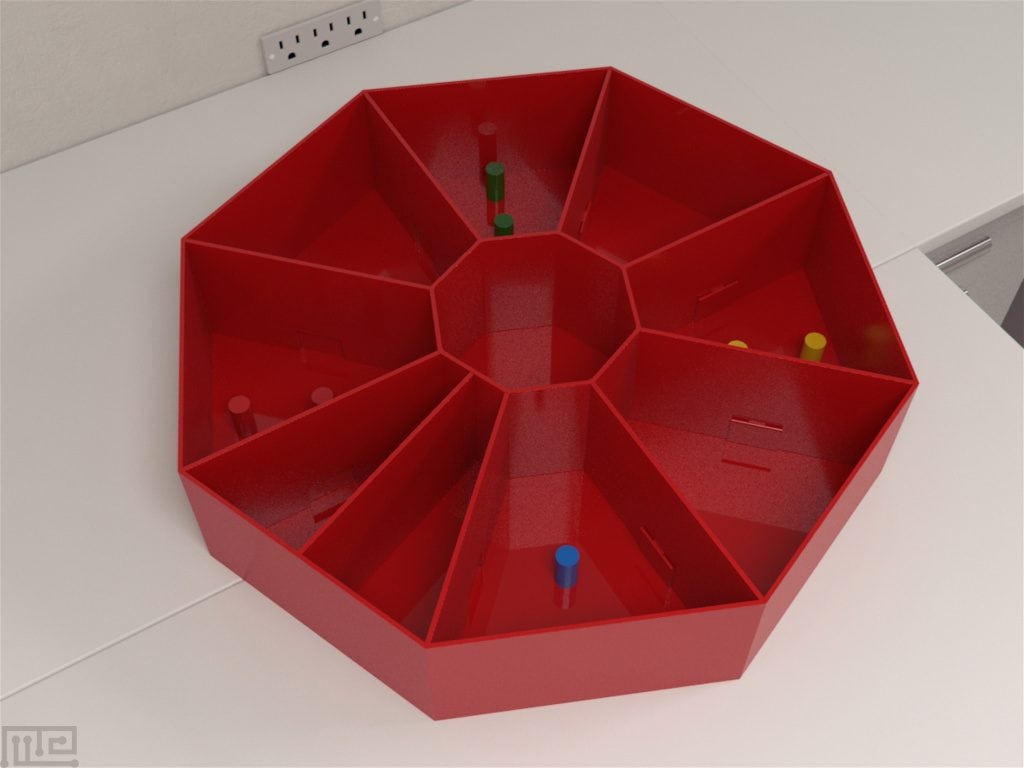 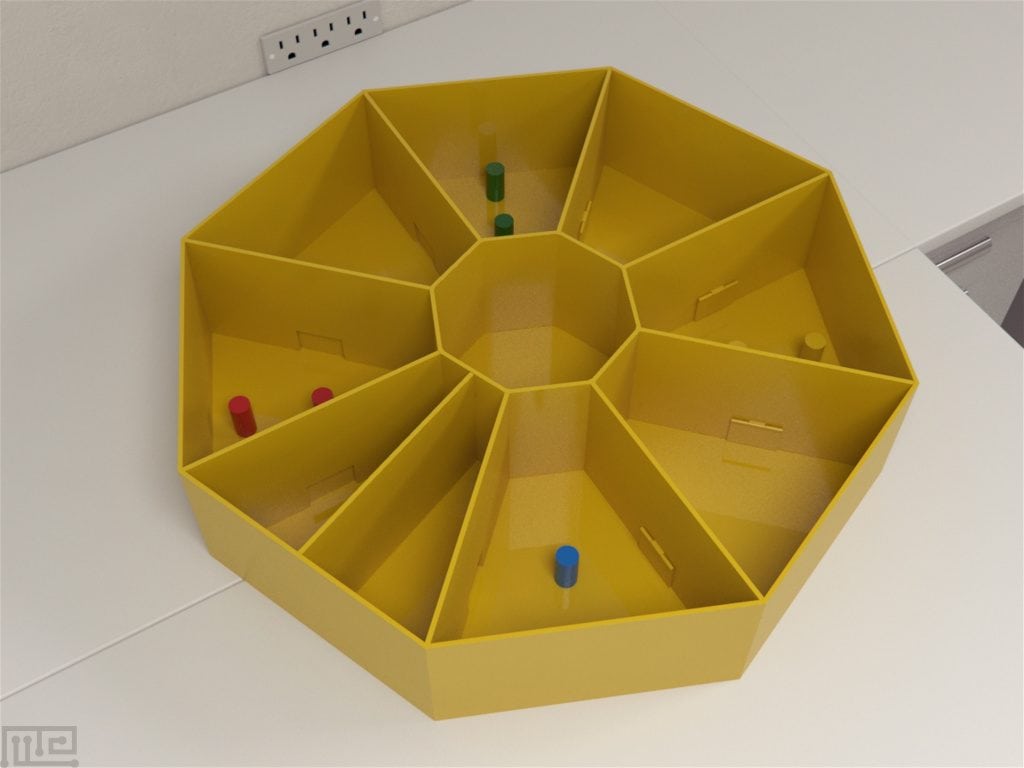 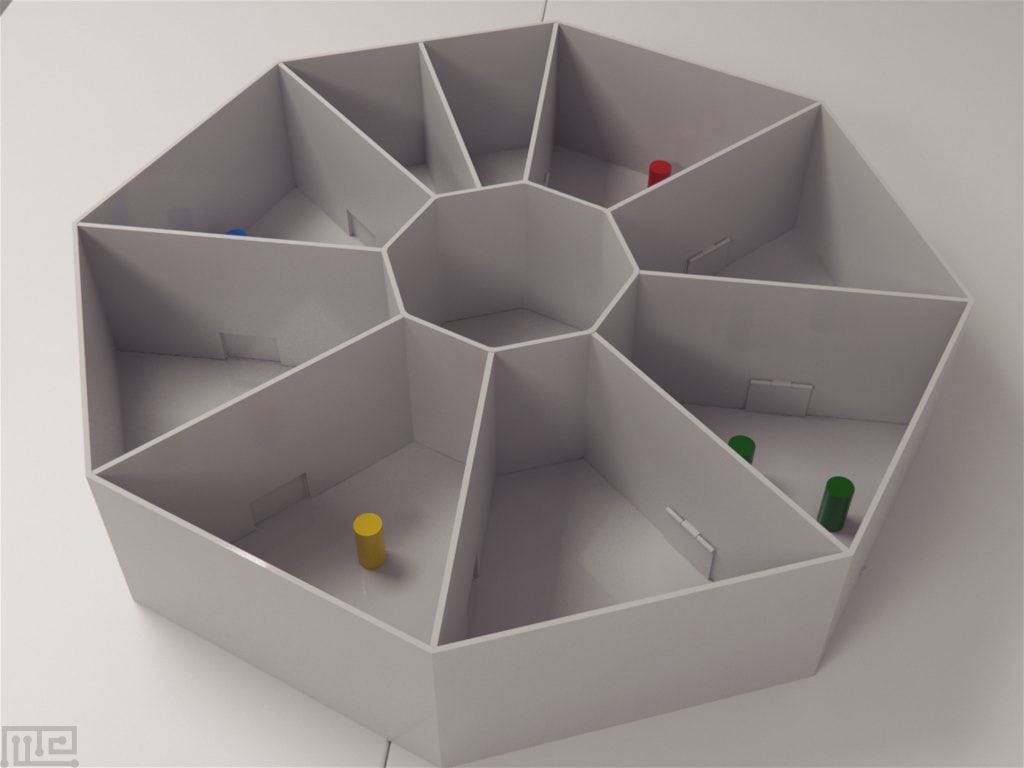 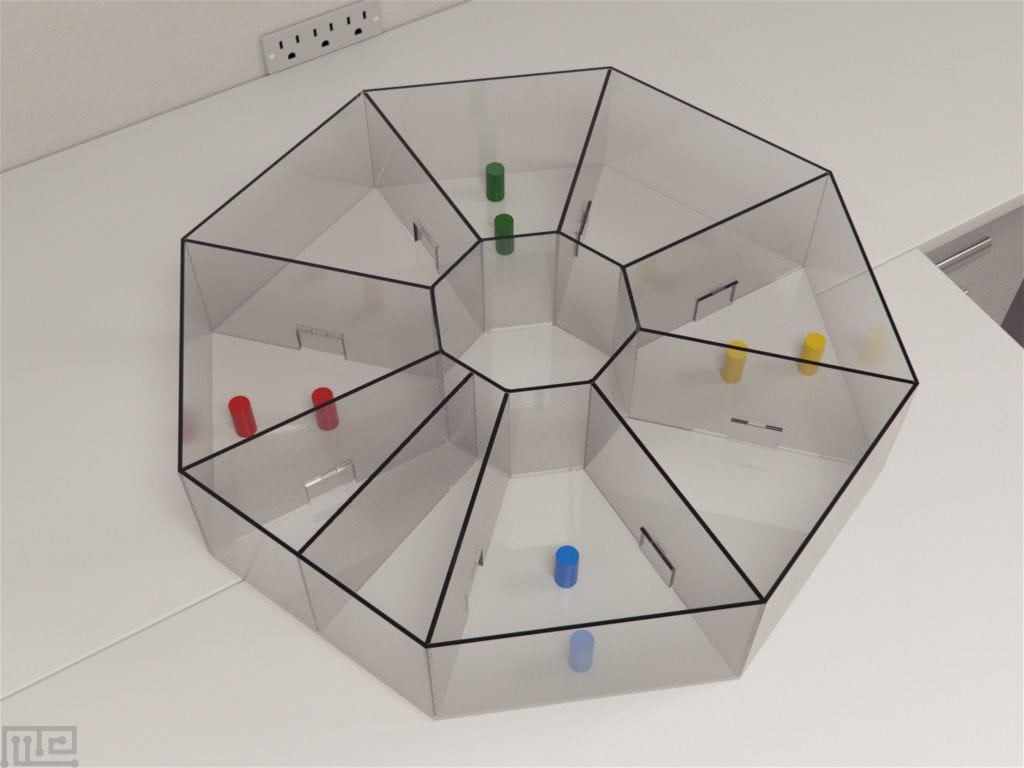 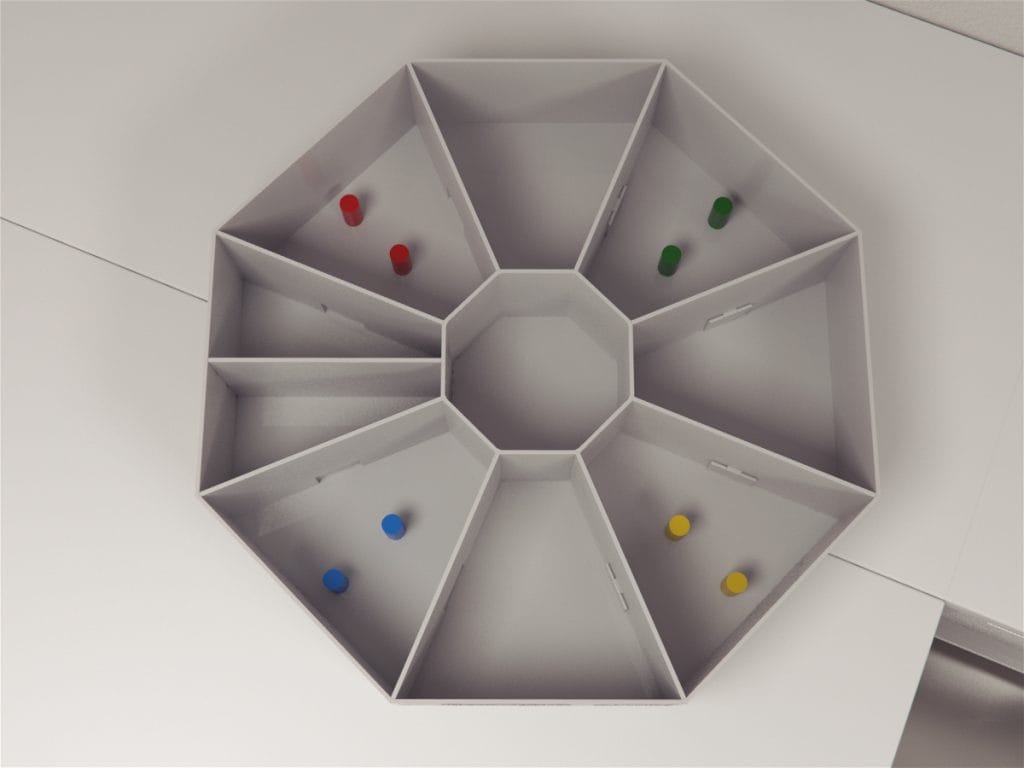 One way doors are included that allow rodents to move in a clockwise fashion only. Counter clock wise doors can be implemented upon request.

Object recognition tasks simply require rodents to discriminate between familiar and unfamiliar stimuli. In this process, the rodent’s innate preference for unfamiliar over familiar objects becomes the basis of evaluation of its ability to retain information within a short period of time (Mathiasen and DiCamillo, 2010).

The DNMS task, on which the NOR assay is partially based, involves the rodent choice between a sample object introduced before testing and a novel object presented during trials and receiving a food reward each time the novel object is chosen (Cole et al., 2012). Consequently, the DNMS task necessitates a high-performance criterion that can only be achieved through what has been deemed considerably time-consuming and impractical pre-training procedures. On the other hand, the NOP test makes use of rodents’ natural inclination to explore novel objects and surroundings as the primary assumption on which memory ability is based (Mathiasen and Dicamillo, 2010). This commonly used paradigm evaluates the rodent’s memory ability based on any observed biases towards a novel object over a sample object introduced beforehand. In this manner, the NOP test puts internal validity at risk in its reliance on the assumption that novelty preference is a sole predictor of memory ability (Cole et al., 2012).

Accordingly, the NOR assay presents a successful integration of the important features of each paradigm. The apparatus makes use of an appetitive reward and explicit choice system, similar to DNMS tasks, as the rodent makes its way around a hexagonal, maze-like track which relies on the exploratory behavior of rodents, like traditional NOP test paradigms (Cole et al., 2012). In this manner, the NOR assay can provide a strong evaluation of object recognition abilities while requiring less extensive pre-training compared to DNMS tasks. And unlike the NOP paradigm, the NOR assay does not solely rely on innate novel object preference as it requires a moderate amount of object recognition training.

The NOR assay consists of a hexagonal track separated into nine compartments by dividers, with seven equal-sized compartments and two smaller compartments that serve as the start and the stop locations. The compartment walls have one-way doors, allowing the rodents to circumnavigate the track in solely either a clockwise or counterclockwise manner. Two removable platforms containing recessed food wells are placed inside each compartment or in every other compartment, depending on the training procedure. The object pairs are placed on top of these food wells, allowing the rodent to access the reward once the correct object is displaced.

During the preliminary habituation phase of training, rodents go around and explore the apparatus freely, circulating the hexagonal track in one direction and also being allowed to collect the reward from open food wells. No objects are present inside the setup at this time. During the first three days of habituation, rodents go around the track once and remain in the setup for 10 minutes. In subsequent sessions they are required to make two trips around the track, making a total of sixteen habituation sessions.

During the first training stage, object pairs are placed in compartments 2 through 7. In the sample phase, the rodent encounters twelve identical copies of the sample object, placed in pairs in each compartment. Each food well is filled with food, and the rodent is allowed to displace the object to retrieve the reward until it reaches the end of the track. Meanwhile, during the test phase, each sample object is paired with a unique novel object, resulting in six sample object/novel object pairs in each of the six compartments. Each compartment is considered one trial. In this stage, only the food well covered by the novel object is filled. The novel object only partially covers the food well, but with each successive trial, the degree of obstruction progresses until the food wells are completely covered, typically by the fourth training session. A rodent is given a correct score by displacing the novel object first, and rodents move on to the second stage of training once they reach a performance criterion of at least 83% of trials correct in four consecutive sessions (20 out of 24 trials correct).

During the second stage of training, the rodent encounters two distinct sample objects as it goes around the track. Different sample objects are used for compartments 2, 3, and 4, and compartments 5, 6, and 7. The sample phase again makes use of sample object pairs, and one random food well is filled in each pair. During the test phase, novel object/sample object pairs are presented, and the reward is provided in the novel object’s platform. The performance criterion for the second stage of training remains the same, necessitating at least an 83% correct choice ratio.

During the final stage of training, only four of the seven compartments are utilized. Object pairs are encountered only in compartments 1, 3, 5, and 7. Each trial makes use of a unique sample object. During the sample phase, four unique sample object pairs are presented in each compartment, with a randomly filled food well between each pair. The rodent makes one trip around the track to familiarize itself with the four sample object pairs. Afterward, each object pair is replaced with a novel object and a copy of the sample object for the final test phase. The novel object’s food well is filled. The performance criterion for the final stage of training is at 80% trials correct (16 trials correct out of 20).

During this stage, variations in time delay between sample phase and test phase are introduced. The initial time delay is at 90 s, eventually progressing to 180 s and 300 s at the same performance criterion. Sessions may be increased to twenty-five for the 180 s and 300 s delay trials. The filled food well’s location, which corresponds to the placement of the novel object, is counterbalanced in a pseudorandom order. Rodents undergo one to two sessions per day; five days a week. The same sample objects are used for all rodents.

The sample data is represented by plotting the mean percentage of correct trials during the final training stage by lesioned and non-lesioned rodents in the 90-s, 180-s, and 300-s time delay sessions.

Compared to other object recognition paradigms, the NOR assay presents a more convenient and accurate measure of short-term memory among rodents, as it incorporates into its maze-like design the strengths of established models such as the DNMS task and the NOP test (Cole et al., 2012).

The NOR assay makes use of a food reward and forced choice system, requiring less extensive pre-training procedures, yet delivering a quality performance evaluation, as is necessitated by object recognition paradigms. The NOR assay eliminates interpretational problems that are typically encountered in novel object preference tests because it strengthens the foundation of object recognition by combining novel object preference and training and reinforcement strategies.

The NOR assay also uses to its advantage the natural animal tendency to explore the unfamiliar; unlike other object recognition paradigms which place the rodent in open fields, the NOR assay reduces constraints on exploratory behavior and, in fact, encourages it through its maze-like design (Cole et al., 2012).