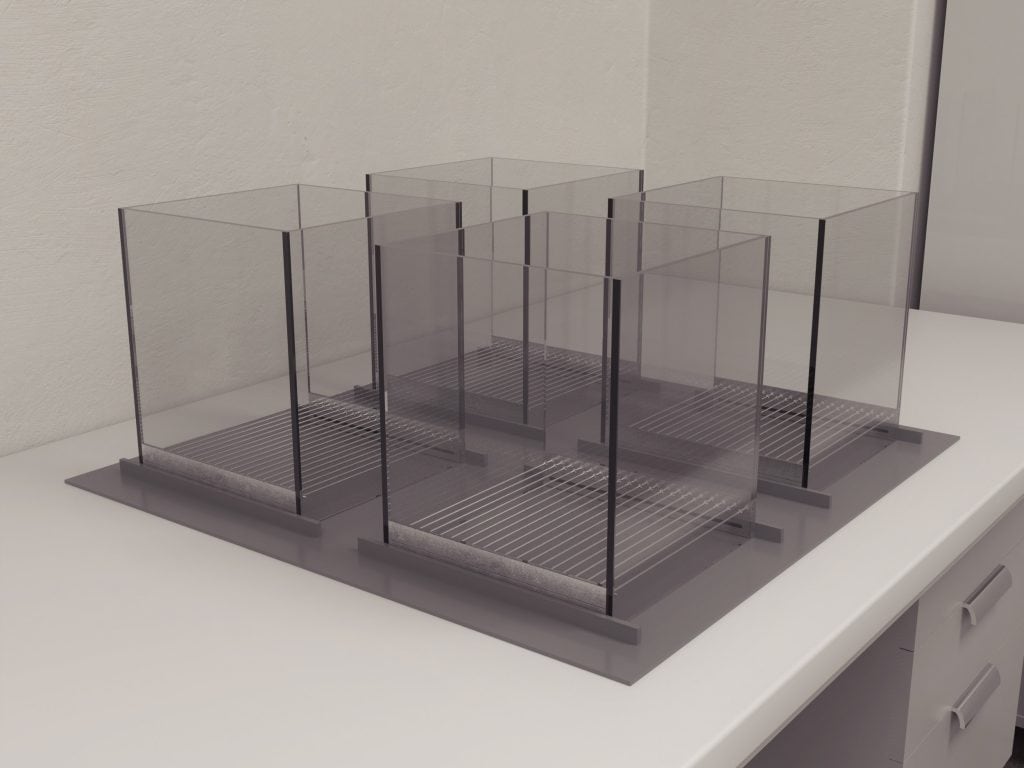 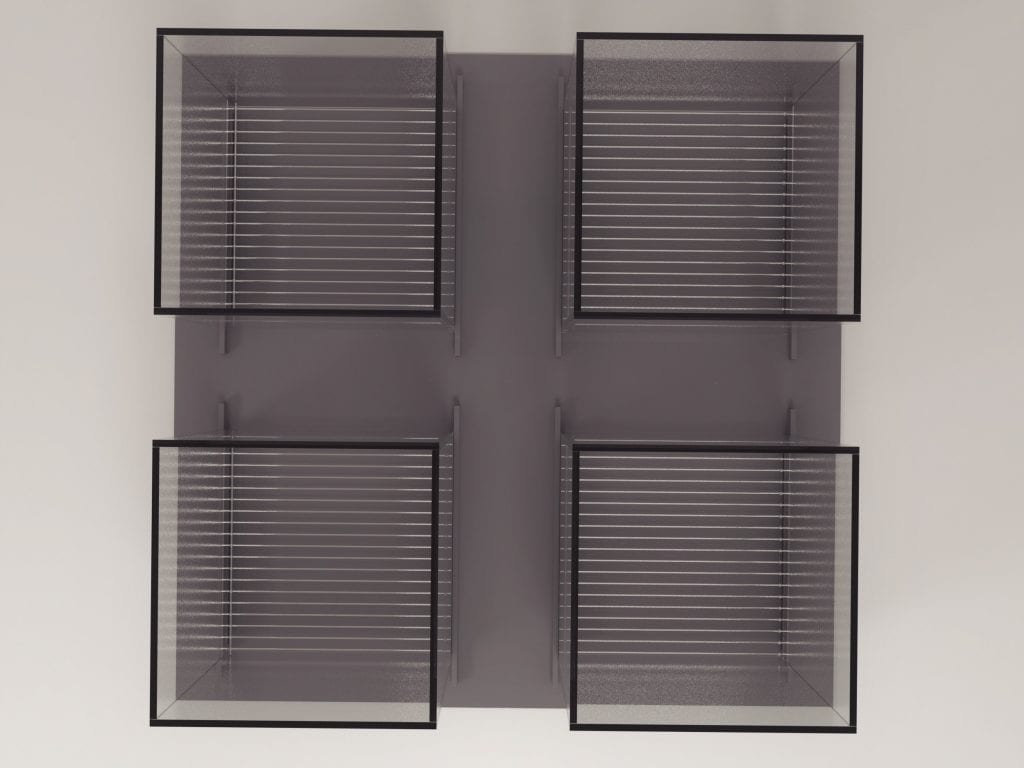 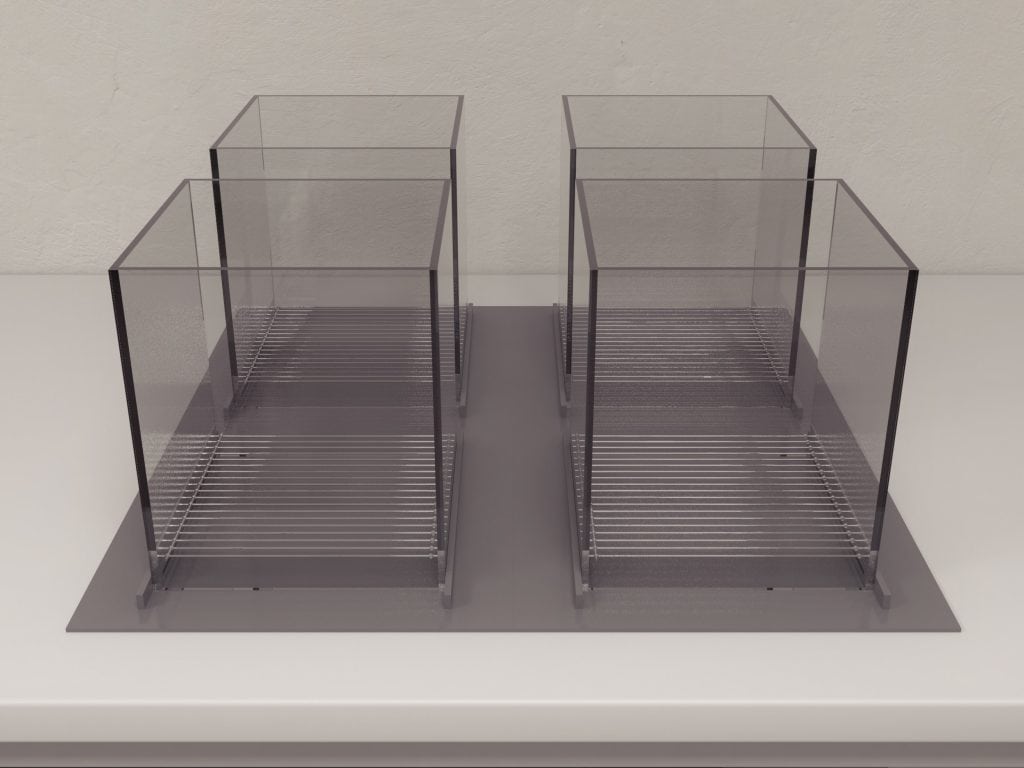 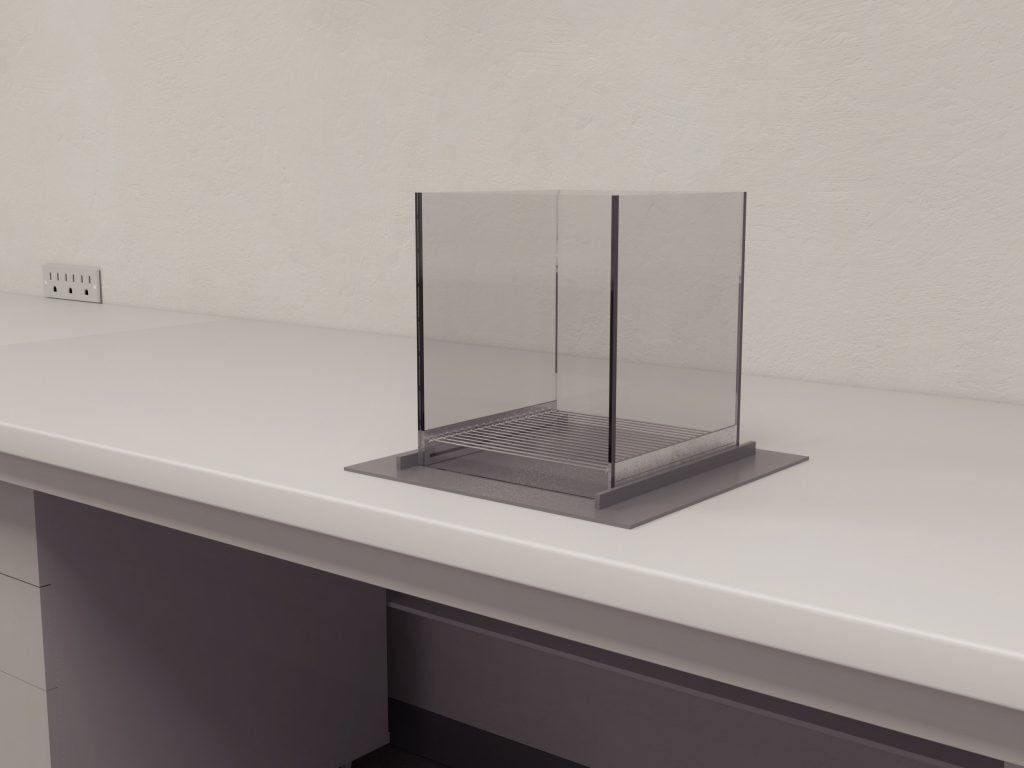 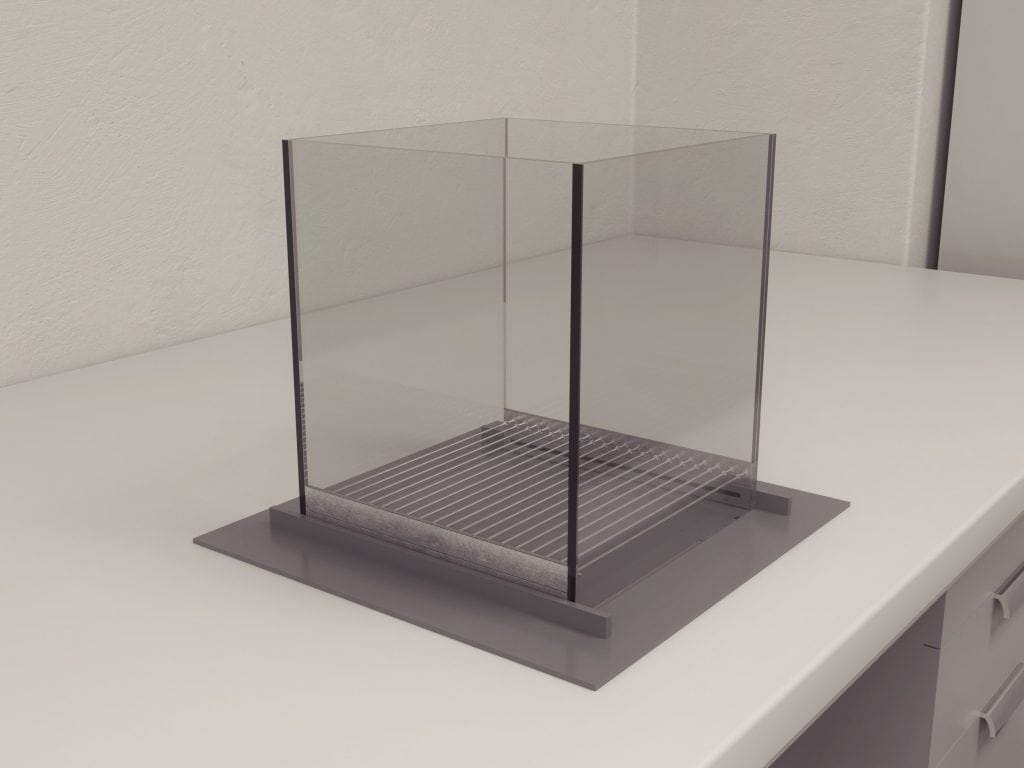 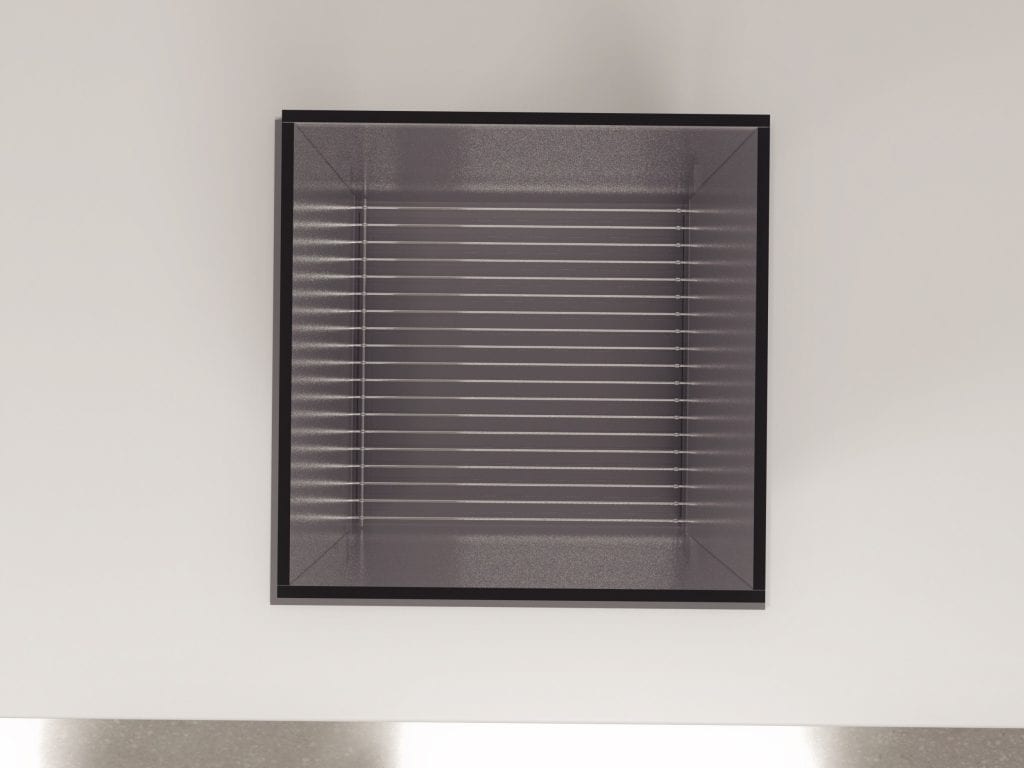 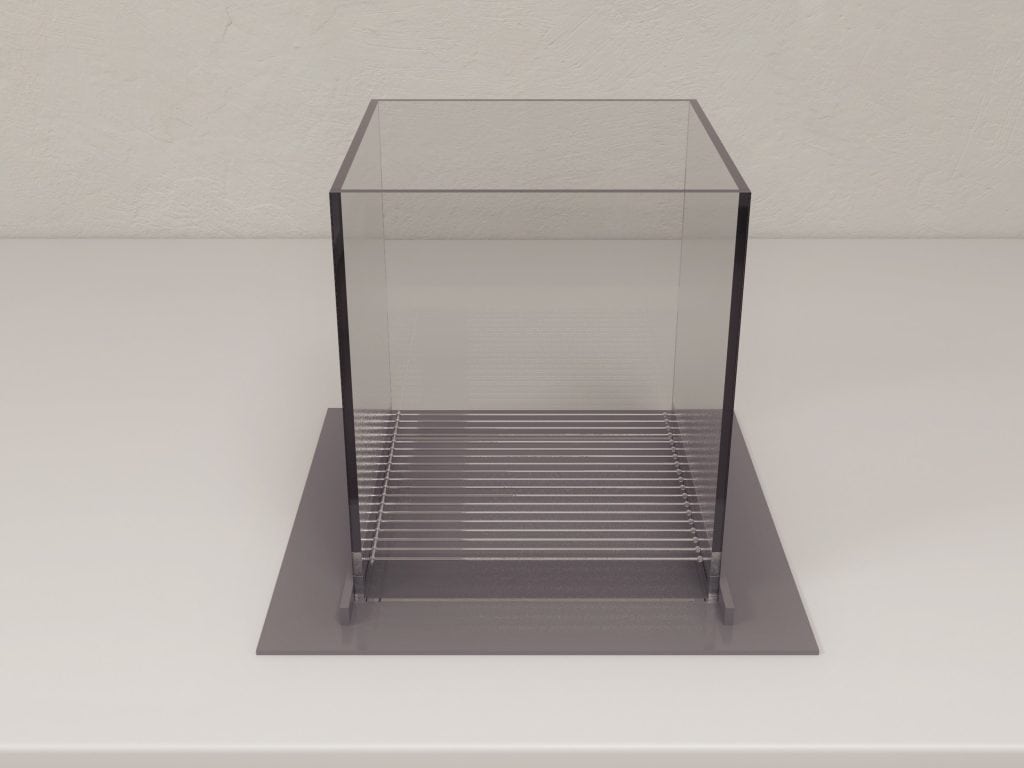 The parallel rod floor test was originally described in the literature by Kamans and Crabbe (2007)  as a simple model of ataxia in mice. In the original protocol, both ataxia and locomotor activity can be measured.

The test allows researchers to quantify differences in motor coordination

MazeEngineers offers multiple manual versions of the Parallel rod test, including a more refined simple rod within an open field (without video grading), as well as a model to replicate the original Kamans and Crabbe paper.

Other apparatuses used in assessing rodent motor function include the Grip Strength test, the Balance Beam, the Parallel Bars, the Geotaxis Test, the Static Rods Test, the Gait Test,  the Pole test, and the Catalepsy Bar test.  See our activity range here.

The parallel rod floor test is a model of ataxia (the lack of muscle control or coordination of voluntary movements, such as walking or picking up objects) in mice. Ataxia can be hereditary and non-hereditary. Causes of ataxia include exogenous substances, such as alcohol, prescription drugs or gluten, radiation, vitamin B12 deficiency, stroke, multiple sclerosis and cerebral palsy. Ultimately, lesions affecting muscle coordination can be observed in diverse areas of the central nervous system, including the cerebellum, thalamus, parietal lobes and spinal cord.

Ataxia can be analyzed by other models, including the rotarod, the balance beam, or the grid test (Phillips, 1975), from which the parallel rod floor test was developed (Kamens and Crabbe, 2007). In addition, tests such as the screen test (Coughenour et al., 1977), the grip strength test (Meyer et al., 1979) or the dowel test (Gallaher et al., 1982) measure physiological responses independent of locomotor activity.

The test typically requires using an acrylic chamber without bottom on top of the parallel rods. Conversely, the rods should be on top of a base plate an activity monitor. These components should be connected with electrical clips. Infrared (IR)/photocell beams placed underneath the monitor are used to detect the animal’s movement. The apparatus should be connected to a computer equipped with an appropriate software. Furthermore, the investigator should consider using a sound-minimizing chamber around the monitor. This system enables automatic recording of paw slips and locomotion, through detection of foot position and beam interruptions.

In what concerns the experimental protocol, the experimenter should start with an initial 45-60 min habituation period to the test room, followed by a brief transfer to an individual holding cage. The apparatus and software should then be set up. Kamens and Crabbe (2007) suggest 5-min testing of locomotor activity and 1-min recording of foot slip errors, whereas Philibin et al. (2012) used 5-min periods for both parameters. The animal should be placed in the center of the chamber and testing should start immediately.

The parallel rod floor test presents several advantages. Unlike other models of ataxia, this test does not require forcing the animal to move. Moreover, it can be performed in parallel with other neurobehavioral assessments. This is an important feature, as researchers have observed that different tests analyze separate underlying aspects of ataxia, and, therefore, multiple tests should be performed to generate a complete set of data. In addition, the test has been shown to be robust, as results are consistent across different test variants. Importantly, the automated analysis corrects for differences in animal activity, which might otherwise strongly influence the results of paw slips errors.

The equipment required to perform the parallel rod floor test in mice primarily entails an acrylic chamber with no bottom on top of parallel stainless steel rods. All dimensions are adjustable. Kamens and Crabbe (2007) suggested dimensions of 15 × 15 × 20 cm3 for the chambers and 1.6 mm in diameter for the rods. Inter-rod spacing is suggested as 6 mm for adult mice. The rods should be connected outside the acrylic chamber with a separate rod perpendicular to the others. Furthermore, the rods should be on top of a stainless steel base plate with recommended 21 × 21.5 cm dimensions with an acrylic border (Kamens and Crabbe, 2007). The frame can have rubber stoppers underneath and needs to be well-centered on top of the activity monitor. The base plate, the parallel rod floor and the activity monitor should be connected via electrical clips. The activity monitor should also be elevated to allow evenly spaced IR/photocell beams, which are used for detection of the animal’s locomotion, to cross the apparatus above the parallel rod floor. Kamens and Crabbe (2007) recommend pieces of wood (approximately 5 × 10 cm2) to elevate the activity monitor. Sound-attenuating chambers should be placed around the monitor to minimize the introduction of confounding variables.

The apparatus enables automated detection of the mouse’s paw slips. When the animal’s paw slips through the parallel metal rods and touches the base plate, the contact is recorded and counted by a computer running an appropriate software.

In alternative, the animal’s activity can be recorded with a video camera. If the lid needs to be remove, the investigator should be careful to ensure that the mouse stays in the acrylic chamber.

The experimental protocol to perform the parallel rod floor test is straightforward and therefore highly reproducible. As with other neurobehavioral assessments, all aspects of husbandry, handling and test environment are critical to generate reliable results.

The investigator should move mice to the testing room 45–60 min before testing to allow acclimatization. The apparatus should be set up to record during a longer period than the required testing interval. Kamens and Crabbe (2007) recommend a 15-min period for a 5-min testing of locomotor activity and a 1-min period registering paw slip errors. Conversely, Philibin et al. (2012) used 5-min testing periods for both parameters.

Mice should be weighed and transferred to individual holding cages for no longer than than 10 min before testing. In case of studies involving evaluation of short-term effect of drugs, these are prepared at this moment.

The mouse should then be placed in the center of the apparatus. Upon starting the activity monitor and closing the sound-attenuating chamber (if used), testing should immediately begin.

At the end of testing, the mouse should be removed from the chamber and transferred back to its home cage. The apparatus should then be cleaned with 10% isopropyl alcohol (Kamens and Crabbe, 2007, Philibin et al., 2012).

This experimental protocol can be repeated in the subsequent days if assessing prolonged effects of a drug. Kamens and Crabbe (2007) describe a 3-day protocol to determine the sensitivity to ethanol.

During the course of the testing period, foot position and beam interruptions are recorded (Kamens and Crabbe, 2007, Philibin et al., 2012).

Kamens and Crabbe (2007) performed a 2-day habituation period before testing. This was due to previously reported strain differences in activity in a novel apparatus (Wahlsten et al., 2006). If comparing different strains in the parallel rod floor test, it is recommended to perform pilot studies to determine the optimal duration of training. Conversely, the authors observed that repeated testing may induce a reduction in activity and exploration in some strains, while others remain equally active.

Inter-rod spacing depends on size of mice. For very young mice, both rod spacing and height above the stainless steel plate would need to be adjusted.

Results of the parallel rod floor test can be shown as number of paw slips (A) and activity level (B). However, given that the number of foot slips is positively correlated with distance traveled (Kamens et al., 2005), Kamens and Crabbe (2007) recommend using an impairment ratio (C), which accounts for both paw slips and differences in activity and, therefore, prevents bias. In addition, graphs can also depict the influence of varying inter-rod intervals (or floor types) in the impairment ratio of the mice (D) (Kamens et al., 2005). Data are typically shown as group averages (A-D). The following graphs show two sample groups – one control and one group administered with drug X. In alternative, the test can also be used to compare different genotypes. Results are mean ± standard error of the mean:

Unlike other models of ataxia, such as the rotarod, the balance beam and the grid tests, the parallel rod floor test does not force the animal to move.

In addition, as this simple test that does not require lengthy habituation or training, it can be combined with other neurobehavioral assessments or with other tests of locomotion (Philibin et al., 2012). This is especially important in studies of locomotion, as different tests may measure varied underlying behaviors or functions, such as the ability to retain balance or changes in muscle strength or weakness (Kamens and Crabbe, 2007). Furthermore, studies assessing genotypic differences across diverse models showed only modest correlation among different tasks, thus suggesting that ataxia is a complex trait requiring careful and integrative analysis.

Kamens and Crabbe (2007) showed the robustness of the test, as it enables using diverse rod diameters and inter-rod spacing without precluding generation of interpretable data. Additionally, they observed dose-dependent sensitivity to ethanol.

Another important strength is that the main parameter to be analyzed – foot slips per centimeter traveled – is corrected for potential differences in activity, which might otherwise strongly influence the results. Furthermore, unlike other measures of ataxia, such as the rotarod, the parallel rod floor test shows robust results when assessing genetic contributions to ethanol-induced locomotor incoordination, as the same strain differences are observed using diverse test variants (Kamens et al., 2005, Kamens and Crabbe, 2007).

Among the test’s limitations, its applicability to test a wide range of drugs remains to be proven. Also, there is still no literature showing that the test can be consistently used with mutant or genetically manipulated mice. An additional aspect that demands a careful approach is the observed extreme sensitivity of certain genotypes of mice in this test compared to other models of ataxia (Kamens and Crabbe, 2007). Furthermore, as discussed above, the complexity of assessing ataxia, in that each model analyzes only one or a few aspects of motor incoordination, means that experimental protocols should include diverse tests to obtain a more complete view.

Phillips JP (1975) A note on the scoring of the grid test of schizophrenic thought disorder. The British journal of social and clinical psychology 14:99-100.

Wahlsten D, Bachmanov A, Finn DA, Crabbe JC (2006) Stability of inbred mouse strain differences in behavior and brain size between laboratories and across decades. Proceedings of the National Academy of Sciences of the United States of America 103:16364-16369.