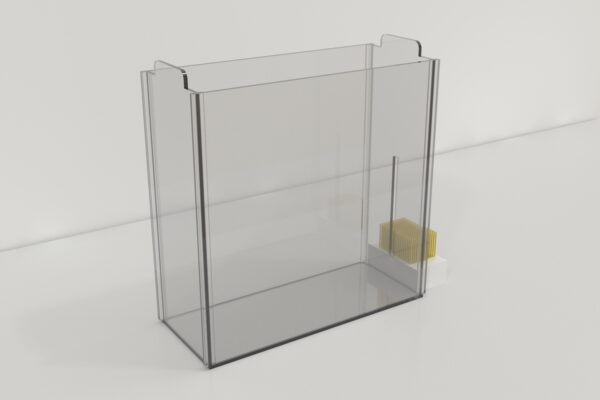 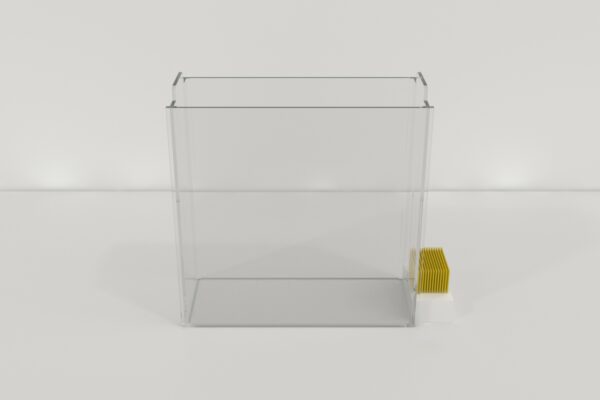 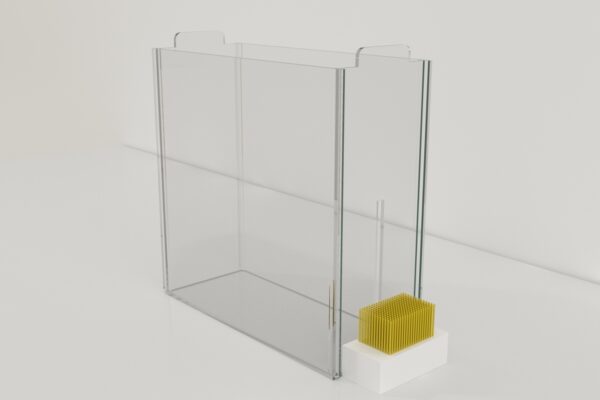 The Pasta Matrix Reaching Task is used to assess the skilled reaching performance of rodents, including their ability to reach for different directions and distances and the range of movement of their limbs.

The apparatus consists of a chamber with a vertical slit that opens into a shelf containing an array of holes for placing up to 260 pieces of uncooked pasta. During the task, the subject is placed in the chamber and must retrieve each pasta piece through the vertical slit using its forelimbs. Since the pasta is arranged in a matrix distal and lateral to the reaching chamber aperture, the subject must alter its reach trajectory to obtain each piece of pasta.

The Pasta Matrix Reaching Task is used to assess the skilled reaching performance of rodents, including their ability to reach for different directions and distances and the range of movement of their limbs.

The apparatus consists of a chamber with a vertical slit that opens into a shelf containing an array of holes for placing up to 260 pieces of uncooked pasta. During the task, the subject is placed in the chamber and must retrieve each pasta piece through the vertical slit using its forelimbs. Since the pasta is arranged in a matrix distal and lateral to the reaching chamber aperture, the subject must alter its reach trajectory to obtain each piece of pasta. After the task, the number of pasta pieces the subject could reach for is counted, and the pattern of removal is evaluated, indicating maximal limb extension in lateral and forward directions. The task can also be modified according to experimental needs. Studies have shown that rats obtain food most effectively when placed contralateral to their reaching paw (Whishaw & Pellis, 1990). Therefore, by using another version of the task with only half of the matrix filled contralateral to the subject’s affected paw, the subject’s reaching performance can be challenged further. Furthermore, differences in reaching performance between the two forelimbs of rodents can also be examined by simply restricting one paw in a bracelet made of Elastoplast.

The Pasta Matrix Reaching Task can assess how skilled reaching performance varies in normal versus rodents with motor performance deficits obtained from brain lesions including dorsal column lesions or those with neurodegenerative disorders including Parkinson’s disease. Furthermore, it can be used to examine motor function in rodent models of stroke after rehabilitative training or therapy. Conduct science also offers the Skilled Forelimb Test, which can also be used to study the skilled reaching performance of rodents.

The following is a sample protocol for investigating skilled reaching performance in rodents with brain lesions using the Pasta Matrix Reaching Task:

Pre-train the subjects on a Single Pellet Reaching Task in which the subjects must extend their forelimbs through a narrow slit to retrieve food pellets.

Fill the entire matrix with pasta for the first 12 days of the testing. Place the subject in the apparatus and allow it to retrieve the pasta using either paw. Place a bracelet made of elastoplastic on one wrist after the first 12 days of testing. Place the bracelet on a randomly chosen paw for the control subjects and on the bad paw for the experimental subjects (with brain lesions). Conduct tests for another 12 days with the bracelet placed. After the 12 days, reverse the position of the bracelet and conduct tests for another 16 days.

Fill only one side of the matrix with pasta such that only 7 rows of holes contralateral to the experimental subjects affected paw are filled. Place the subject in the apparatus and allow it to retrieve as many pieces of pasta for 30 mins a day for 15 days. Count the number of pasta pieces retrieved in the last 5 days. Calculate the maximum distance the subjects could reach for the pasta.

Investigation of rodents skilled in reaching distance, direction, and dexterity

Ballermann, Metz, McKenna, Klassen, and Whishaw (2001) investigated rodents skilled reaching distance, direction, and dexterity using the Pasta Matrix Reaching Task. The experiment was conducted on twenty female adult Long-Evans rats. Eight subjects received unilateral lesions of the dorsal columns, six received unilateral 6-hydroxydopamine lesions to the nigrostriatal bundle (6-OHDA group), and the remaining subjects were used as control. The subjects were tested using two versions of the task. The first version comprised the entire matrix filled with pasta and the second version consisted of only half the matrix filled. The subjects were tasked to retrieve the pasta from the matrix using either both their paws or one paw with a bracelet placed on the restricted paw. Moreover, the subjects were also tested with the bracelet placed on the opposite wrist. The results from the first test between the 6-OHDA group and controls indicated no difference in reaching success using their good paw. However, when the location of the bracelet was reversed, the lesioned subjects showed impaired performance with no improvement over training days. Qualitative ratings of the subjects movements revealed no significant difference in the average rating performance between the control and 6-OHDA group using the bad paw. However, follow up tests indicated that the 6-OHDA group displayed inferior movements to the control group. The results from the second test between the control, 6-OHDA, and dorsal column lesion groups indicated no difference in the number of pieces of pasta obtained between the control group and the dorsal column lesion group. It was observed that the 6-OHDA group removed fewer pieces of pasta than the other groups

Tennant and Jones (2009) investigated sensorimotor impairments in mice caused by intracortical infusions of endothelin-1 (ET-1) into the forelimb area of the sensorimotor cortex. The Pasta Matrix Reaching task was used to assess dexterous forepaw function. Young adult male C57BL/6 mice were used in the study. They received sham surgeries, intracortical infusions of ET-1 that produced unilateral lesions of the forelimb region of the sensorimotor cortex, or intracortical infusions of sterile saline. The surgical procedures were conducted contralateral to the preferred limb. The subjects were trained to reach the pasta with their preferred limb with only hald of the matrix filled contralateral to the preferred limb. The subjects had to make 100 reaches during daily training sessions or until 15 minutes elapsed. The results indicated no significant difference in reaching attempts per session between the lesion and sham groups post-operatively. These impairments persisted throughout the 26 days of observation. Overall results revealed that ET-1 is an effective approach for inducing small, reproducible lesions of anatomical subregions in the mouse neocortex that result in long-lasting functional deficits in the forelimb.

Chiken and Tokuno (2005) utilized the Pasta Matrix Reaching Task to evaluate the effect of unilateral ablation of the striatal interneurons on skilled forelimb use of rats. Three male and three female Wistar rats were used in the study. The Pasta Matrix Reaching Task was modified to include an 8 mm vertical slit instead of the standard 10 mm slit to limit the variety of movements of the shoulder joint of the subjects when they reached for the distant pasta pieces. Moreover, the experimenters did not place the pasta in the 6×8 section near the vertical slit to avoid reinforcing the subjects from reaching the distant pasta pieces. Blue-colored flour pasta with sugar was placed on top of each pasta piece to enhance its visibility. The subjects were first trained to reach for the pasta pieces for 20 mins per session for 7-14 days. After training, testing was conducted for nine days. The day after the testing trials, the subjects received a stereotaxic injection of the substance P-saporin (SP-saporin), into the dorsolateral part of the striatum, where corticostriatal fibers from the forelimb region of the motor cortex are distributed. This was done because SP-saporin can cause selective ablation of striatal interneurons expressing SP receptors (SPR). The Pasta Matrix Reaching Task was conducted again when the subjects recovered after 10 postoperative days. The task was video-recorded five times and the paw the subjects used for each reach was analyzed. The results indicated that the paw of the subject’s experimental side (contralateral to the injection) after injection of SP-saporin into the striatum showed a significant decrease in the number of pasta pieces retrieved. On the other hand, the paw ipsilateral to the injection, or the contralateral side, had an increase in the number of pasta pieces retrieved. Impairment on the experimental side was also observed when the subject reached for the remotely or laterally located pasta pieces after ablation.

The following parameters can be observed using the Pasta Matrix Reaching Task:

The Pasta Matrix Reaching Task assesses the skilled reaching performance of rodents. Several skilled reaching behaviors are examined using the task, including rodents’ advance of the paw, pronation of the paw, digit opening, grasping, and supination of the paw. A clamp attaches the pasta shelf to the apparatus’s chamber, which makes it easier to refill the shelf with pasta. The shelf contains 260 holes for placing the pasta, which is arranged distal and lateral to the vertical slit of the chamber. Therefore, the distal pieces of pasta can easily measure the rodent’s maximum reach. The task also allows a convenient endpoint measure of success.

A limitation of this task is that it requires training the subjects to retrieve each pasta piece which can take several days.