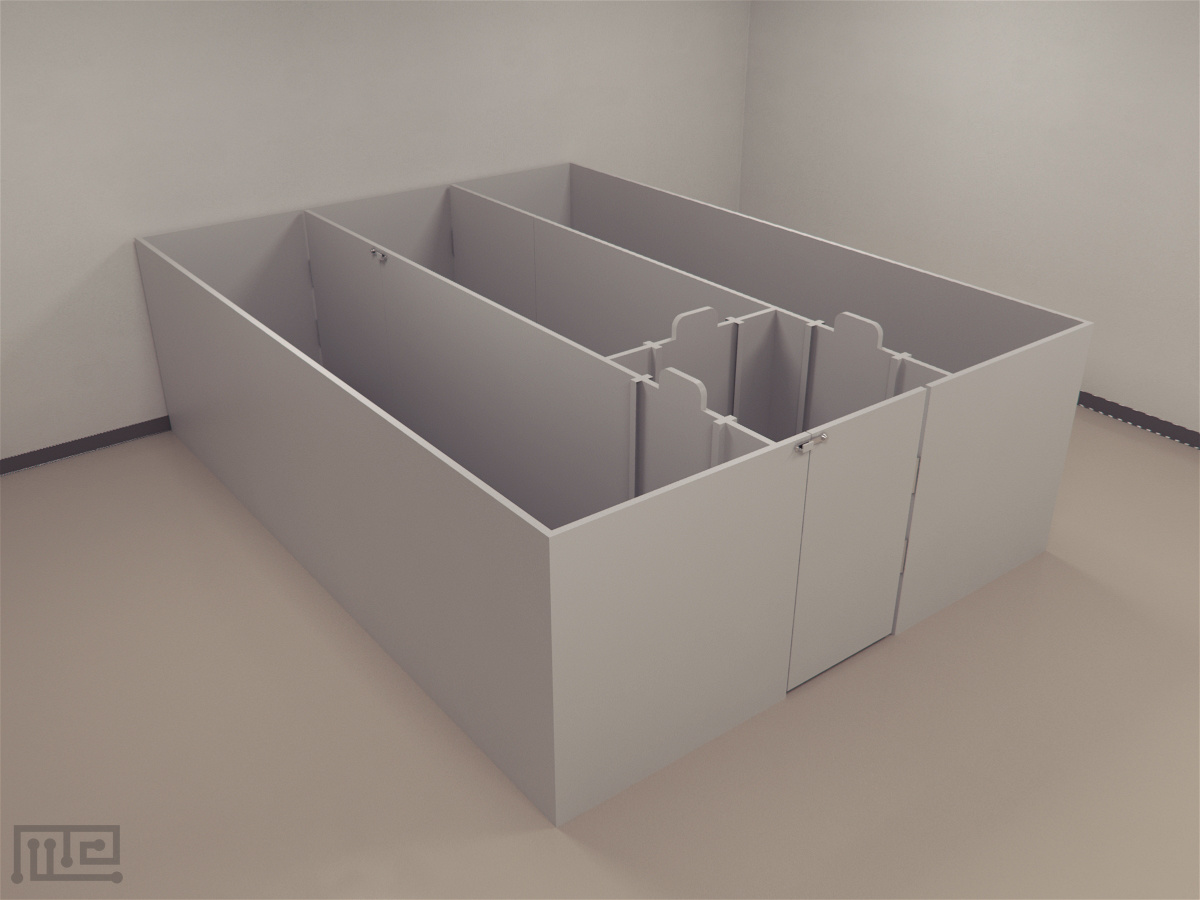 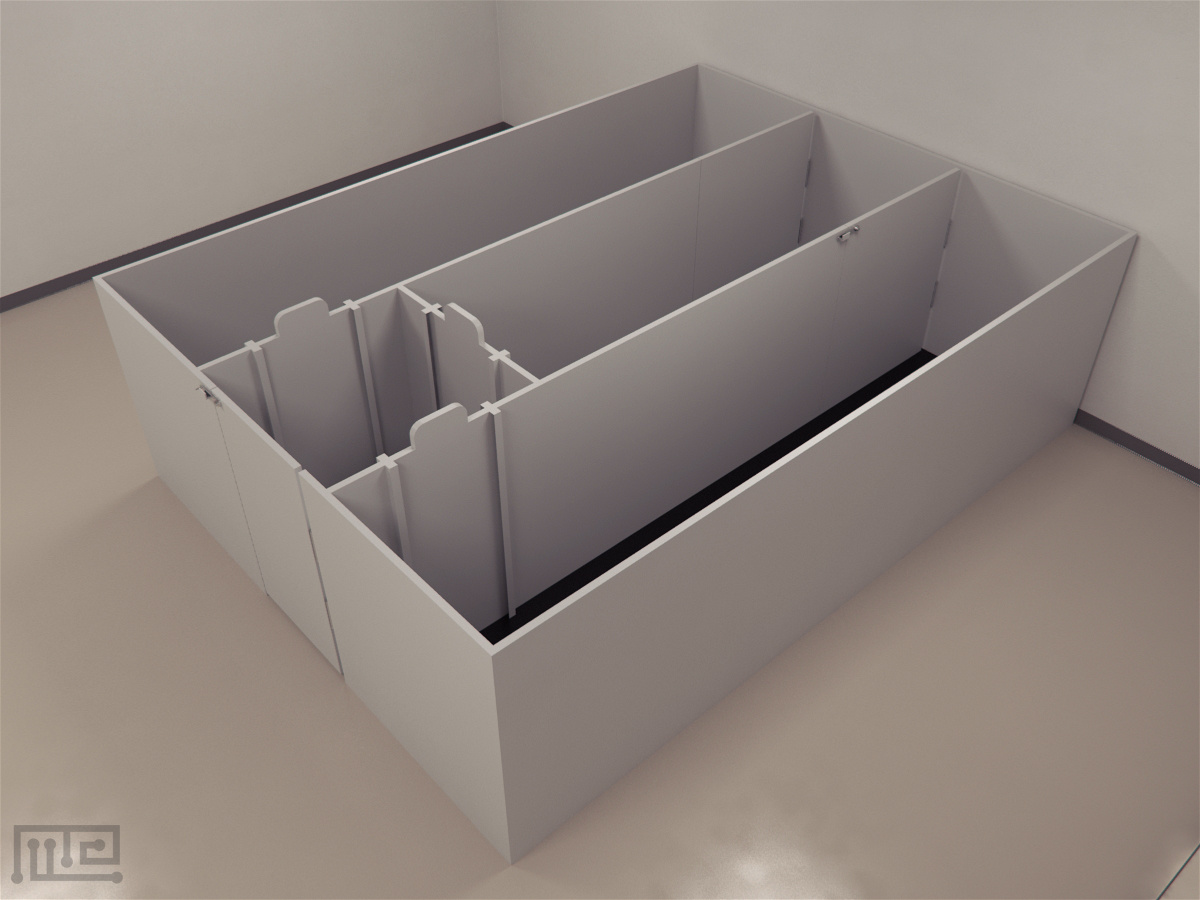 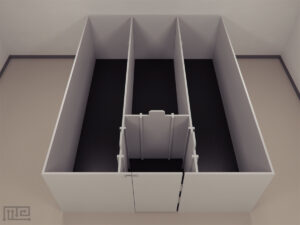 The delayed non-match to sample (DNMS) task is used to analyze the role of the hippocampal system in spatial learning.

The maze is constructed of dark brown painted acrylic boards. It has arms and a start box. The pigs entered the maze through a door in the back of the start box. The start box also has three guillotine doors, which could be opened by pulling ropes. Two swing doors can close off the arms of the maze.

The task demands the subjects to learn a specific path in the sample phase, remember it during the delay period and choose the novel path during the test phase. The delay period between path learning and test period challenges memory retention. The subjects are motivated with food reward for selecting the novel route.

The delayed non-match to sample (DNMS) task is used to analyze the role of the hippocampal system in spatial learning. The pig DNMS task demands the subjects to learn a specific path in the sample phase, remember it during the delay period and choose the novel path during the test phase. The delay period between path learning and test period challenges memory retention. The subjects are motivated with food reward for selecting the novel route. The maze tests subject ability to choose correct arm by retrieving spatial memory.

The pig delayed non-match to sample (DNMS) task is applied in understanding the role of the medial temporal lobe and hippocampal system in memory recognition in the pig model of diseases. The DNMS task maze is also useful in evaluating brain injuries causing disruption in recognition memory function and developing relevant therapeutic interventions. The delayed non-match to sample (DNMS) task maze design is based on T-maze used for spatial memory assessment in rodents. Guillotine doors are fixed in the apparatus to control the movement of subjects. Other apparatus used for assessing memory and learning behavior in pigs are Pig T Maze, Pig 8 Arm Radial and Pig Hebb-Williams Maze.

The pig DNMS task maze construction is based on the T-maze design. The maze is 1.2 m tall, 4 m deep and 3 m wide. Each arm of the maze is 1 m wide. A start box measuring 1m x 1m is found at the entrance of the maze and has three guillotine doors to enter the start arm, the left and the right arms of the maze. Adjacent to the start box, a door is present in the left arm for experimenter interventions during the test. Two swing doors are found at the distant end of the maze to control subject entrance towards the choice arms. The floor of the maze is marked with choice criteria (at 1 m distance) and goal criteria (2.5 m from the start) lines.

Clean the maze with water before starting the trial and during the delay period to avoid interfering olfactory cues. An external tracking and recording systems such as the Noldus Ethovision XT can be used to record pigs’ behavior during the task.

Before the shaping procedure, habituate the subjects with the experimenter and the maze for 3 weeks.

Perform the procedure in two steps sample phase and test phase. In the sample phase, close one arm of the maze and let the pig enter the start box. Open the middle guillotine door and wait until the subject moves towards the open arm. When the subject chooses the correct arm and returns to the start box, reward it with the food.

After a predetermined delay period begin the test phase. Keep both arms open and let each subject explore the maze for 180 seconds. Reward the subjects as they return to the start box after making the correct arm choice. Keep the pigs in the start box during the delay period or in their home pens for extended delay periods to reduce stress. Perform 5 consecutive trials on each group for 5 days.

Evaluation of the effect of scopolamine on memory using DNMS task

Nielsen et al. (2009) evaluated memory dysfunction and the effects of scopolamine (anti-cholinergic drug) on the hypothalamus and related structures of pigs. Two groups of four Gottingen minipigs were used as subjects. One group was administered with normal saline 1M (control), and the other group was given 0.04 mg/Kg scopolamine. Both the groups were tested in the pig delayed non-match to sample (DNMS) task. The task demands the subjects to choose between the two arms of the maze based on novelty and memory recognition. The subjects were encouraged to choose the novel arm by providing food reward. Results revealed that the percentage of correct choices in control subjects decreased from 90% to 66.5% and 56% with an increase in time from 60-sec to 300 sec and 900-sec. The mean time to reach goal after normal saline administration was 16 sec, 21 sec and 13 sec at 60-sec, 300-sec and 900-sec delay, respectively. Scopolamine decreased the percentage of correct choices to 64% after 60-sec, 58.5% after 300-sec delay, and 48.5% after 900-sec delay. The mean time spent in reaching the goal raised to 45.5 sec with 300-sec delay and 40-sec with 900-sec delay.

Following parameters are recorded by using the pig DNMS task

The pig DNMS task is an established test used for analyzing impaired cognitive behavior in different species of pigs. The task involves positive emotional conditioning to reinforce novelty preference in subjects. It is also used to study the effect of therapeutic agents on learning and memory. The pig DNMS task also has applications in evaluating memory dysfunctions such as Alzheimer’s disease. The presence of the start box in the maze reduces excessive handling of subjects.

Olfactory cues can interfere with the task performance; therefore, proper cleaning of the apparatus is mandatory during trials. Task performance is training dependent. Improper handling and excessive training may result in stress in subjects. The task entails continuous experimenter intervention and monitoring.