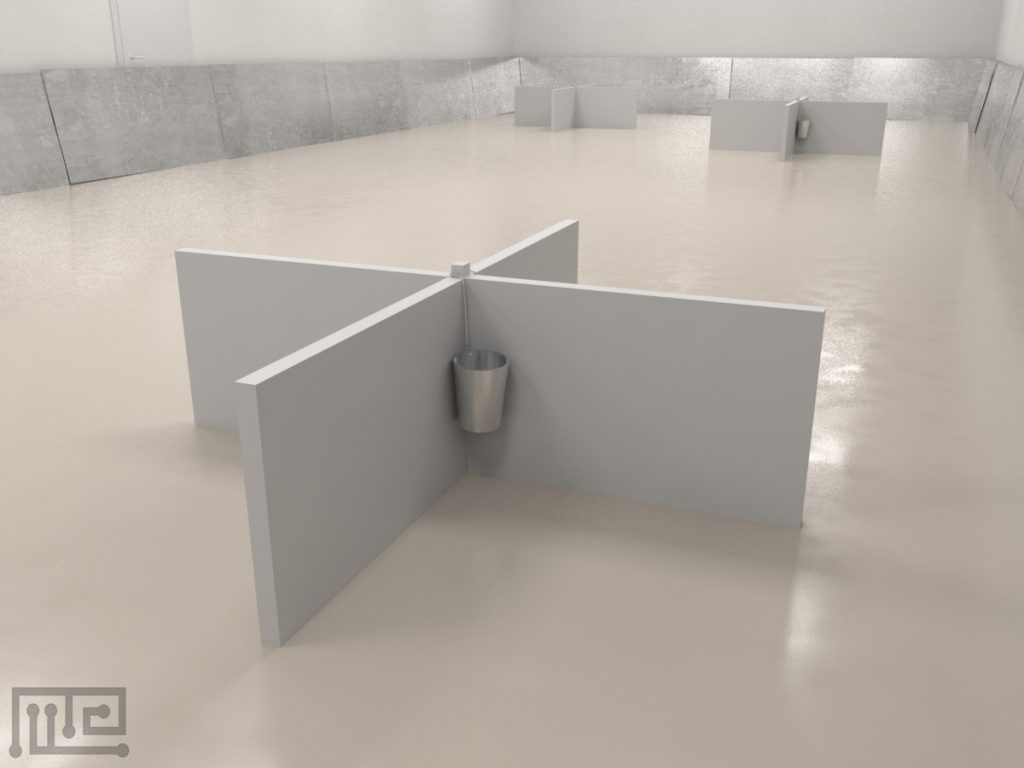 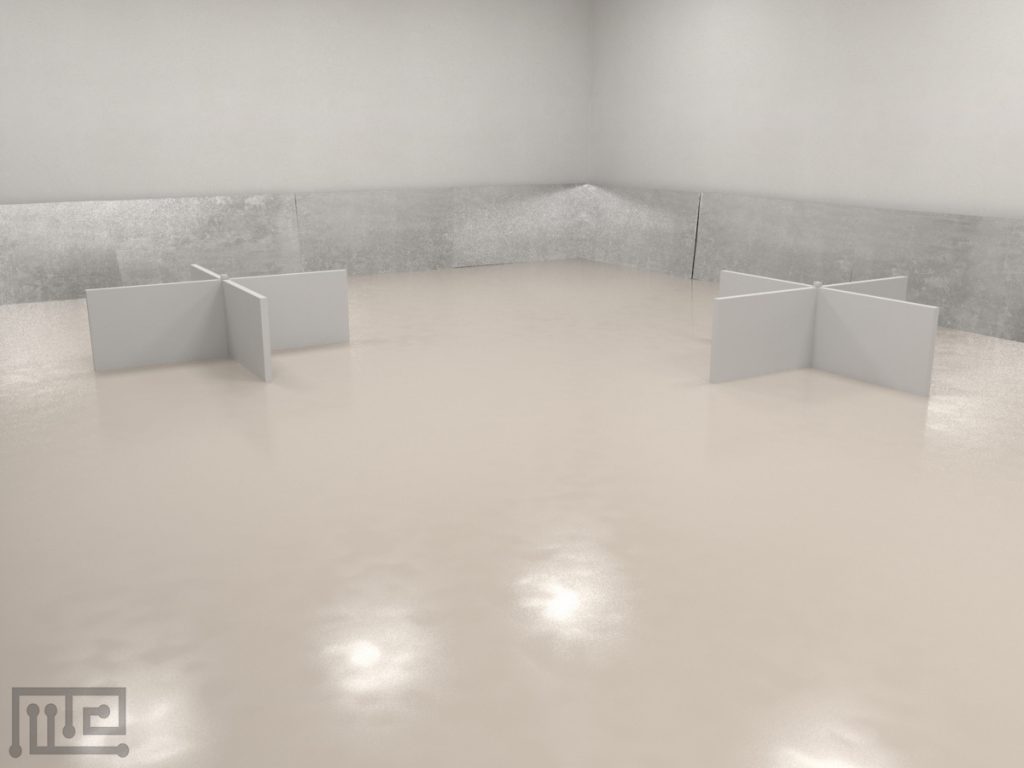 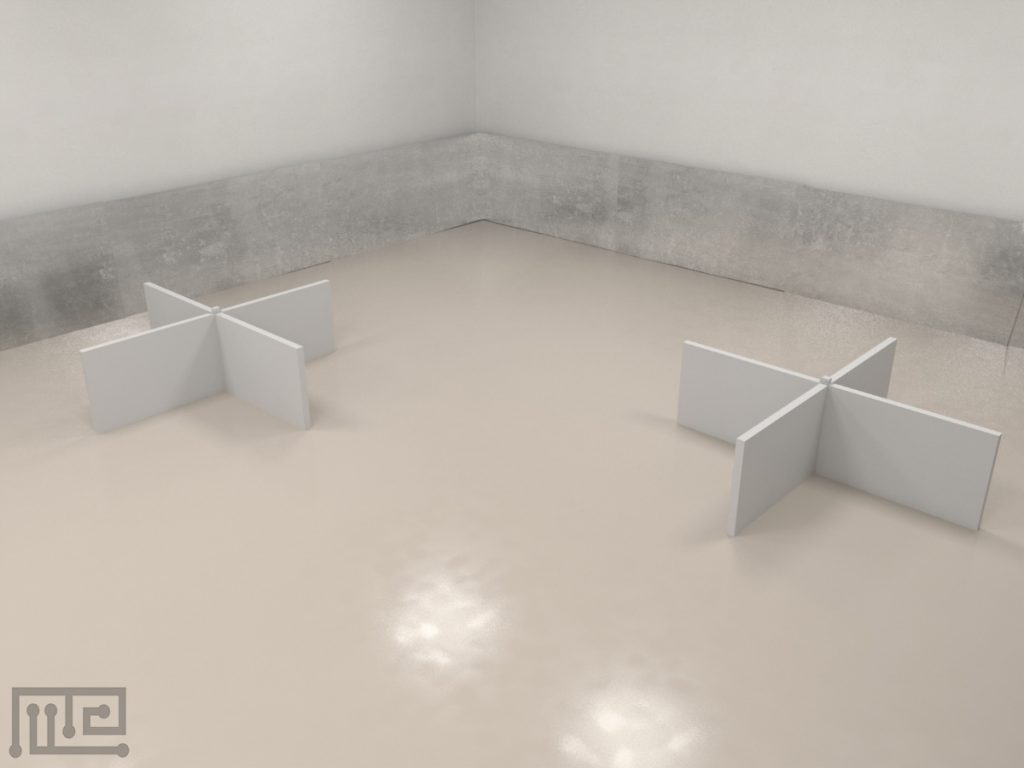 The Pig Foraging Arena can be used for different foraging experiments. It was used in the study of animal social tactics in the domestic pig, through an experimental analogue of natural foraging skills, the ‘informed forager’ paradigm.

In the experiment, the room sides consisted of galvanized metal sheets such that pigs in the home pens could not see inside it. The arena contained eight buckets which were fixed in the distal corners of four X-shaped mounts arranged along the periphery of the arena. Each ‘X’ consisted of a cross of two upright boards of acryic. All eight buckets contained 400 g of feed covered by a wire mesh.

The Pig Foraging Arena is used to study foraging behaviors in pigs. Pigs are social foragers and often gain knowledge about feeding sites from their family groups (Figueroa, Solà-Oriol, Manteca, & Pérez, 2013; Oostindjer et al., 2011). In addition, pigs have been shown to form dominance hierarchies within their groups, which greatly influences their individual foraging decisions as well as the foraging behaviors of others (Held et al., 2010). The Pig Foraging Arena is essentially a large Open-Field Arena consisting of X shaped mounts to hold reward buckets along the periphery of the arena. Social behaviors in this arena are often assessed using an informed forager paradigm. This paradigm usually involves training an individual pig with the rewarded buckets in the arena and then testing it in pairs with another pig with no prior exposure.

Apart from the assessment of socially influenced foraging behaviors, the Pig Foraging Arena can also be applied to testing spatial navigation and memory abilities in porcine models. Since the reward buckets are not fixed, the number of buckets used and their combinations can be varied to manipulate the task’s difficulty. Additionally, the buckets are designed with a wire mesh cover to separate the pig feed inside from the food bait placed on top. This helps masks the olfactory cues and minimizes their influence on the task.

The large size of the arena and the use of appetitive rewards in the task, make training and testing less stressful for the subjects. The Pig Foraging Arena can also be adapted for different experimental protocols, such as preference testing. Other apparatus used in the evaluation of pig behaviors include the Pig T-maze, the Piglet Removable Y-Maze, the Pig 8 Arm Radial Maze, the Pig Open Field,  and the Pig Hebb-Williams Maze.

The Pig Foraging Arena consists of a testing arena that measures 5.7 x 12 m with sides made of galvanized metal sheets. A start box connects the arena to the pen room through a corridor and is separated from the arena by a manually operated flap. A 1 x 1 grid marks the floor of the arena. Four X-shaped mounts, each constructed using boards measuring 60 m in height, are placed along the periphery of the arena. Each mount allows placement of one bucket in each corner. Each bucket has a removable wire mesh cover on which food bait can be placed. Exit from the arena is achieved through either one of the four gates along the arena’s sides.

Clean the arena after every trial. Appropriately light the arena. A tracking and recording system such as the Noldus Ethovision XT can be used to assist with observations.

The following is a sample protocol to evaluate informed and non-informed pairs and is used typically in the assessment of social influences on foraging behaviors. The protocol uses eight reward buckets (2 buckets per mount) placed at the distal corners of the mount.

Bait four buckets in the arena. Introduce pairs of subjects into the foraging arena and allow them to familiarize themselves and consume the food reward. Repeat the trial on a consecutive day. On the following day, bait two buckets in the arena and allow the subjects to individually explore the arena. End each trial by removing the subject after all the food has been consumed or 10 minutes have passed.

Wipe the previously baited bucket and bait the same bucket again. Release the subject from the start box and allow it to explore the arena. Lead the subject out of the arena after it finds and eats the food bait.

Bait one of the buckets in the arena. Remove an informed forager from its home pen and lead it to the start box. Release the subject from the start box and allow it to explore the arena. Lead the subject out of the arena after it finds and eats the food bait.

Investigation of foraging behavior in pigs when accompanied with another forager

Held et al. (2010) investigated foraging tactics employed by subordinate pigs in the presence of different types of co-foragers. Thirty juvenile Large White × Landrace pigs were divided into groups of six with each group consisting of two light subordinates (30 kg) and four heavy dominant individuals (40 kg). The pigs were tested on the Pig Foraging Arena, which contained 12 buckets fixed in the four X-mounts’ distal corners. Out of the 12 buckets, two buckets were baited: one containing a large bait of food and the other containing a small bait. The subordinates underwent informed forager training, while the dominant pigs were only trained using search trials. Dominant pigs were divided into two groups: non-informed and non-follower. For non-informed dominant followers (NI), a different bucket was baited for each trial, while the same bucket was baited each time for non-followers (NF) pigs. During the testing phase, the subordinates first performed search trials and then were paired with a NI or NF pig during their relocation trial. Results indicated that across all I–NI tests, I-pigs had no significant preference for retrieving either bait first. However, I-pigs were biased in retrieving the larger bait first in I-NF tests. The order in which I-pigs visited the two baits had no effect on the total time they spent at the two baits or on the total time they spent feeding. Further observations revealed that during I-NI tests, the dominants displaced the I-pigs from one or both buckets. In I-NF tests, however, the I-pigs were never displaced from the two baited buckets, and the NF dominants never followed the pigs to steal the bait.

Investigation of value-based discrimination of food sites by pigs

Held, Baumgartner, KilBride, Byrne, and Mendl (2005) evaluated the performances of nine juvenile Large White × Landrace female pigs in a spatial memory task in the Pig Foraging Arena. The task was performed with eight buckets placed at the distal corners of the X-mount, of which two buckets were baited. The buckets contained a large bait and a small bait with a brick placed along with the smaller bait to serve as an obstacle. The pigs were tested using two experiments. In the first experiment, the pigs were allowed to retrieve both baits in their relocation visit. However, in the second experiment, the pigs were restricted to obtain only one of the two baits in their relocation visit. Results from the first experiment indicated that the pigs visited more buckets in search trials than relocation trials, and all pigs were able to find the two baited buckets. It was observed that the pigs didn’t have a significant preference in retrieving either bait first. In contrast, the subjects preferred to retrieve the larger bait first in the second experiment. Control trials were then performed on four subjects where a brick was placed in both the large bait and small bait buckets, and their relocation choice was restricted to one bucket. It was observed that the subjects still preferred the larger bait bucket.

Investigation of foraging strategies of pigs subjected to exploitation

Held, Mendl, Devereux, and Byrne (2002) how exploitation by a dominant co-forager influenced the foraging behaviors of pigs in the Pig Foraging Arena task. The task was performed with eight buckets placed in the distal corners of the X-mounts, of which one bucket was baited. Sixteen juvenile female pigs (Sus scrofa) were housed in pairs composed of light-weight subordinate and heavy dominant pigs. The subordinates underwent informed forager training (I-pigs), while the dominant pigs (Non-informed pig, NI-pig) were trained with only search trials. Following the completion of training, I-pig and NI-pig pairs were tested in a joint foraging trial. Results indicated 570 cases in trials where the I-pigs changed their direction of movement after NI-pigs closely followed them. It was observed that the I-pigs were more likely to go towards the baited bucket when the NI-pigs were out of sight, further away, or not close.

Held, Mendl, Devereux, and Byrne (2000) investigated the use of social tactics in pigs using an informed forager paradigm in the Pig Foraging Arena. Sixteen juvenile female Large White × Landrace × Duroc pigs were divided into two groups based on their weight which consisted of eight ‘light’ (mean live weight ± SD= 29.87 ± 2.29 kg) and eight ‘heavy’ (40.62 ± 2.13 kg) pigs. The task was performed with eight buckets placed at the distal corners of the X-mounts, of which one bucket was baited. During training, a subject from the light group was allowed to perform search and relocation trials and was labeled as the informed pig (I-pig). It was observed that the I-pigs significantly searched more buckets in the search trial as compared to the relocation trials. The subjects from the heavy group were only trained using a search trial and were labeled as non-informed pig (NI-pig). In the testing phase, the I-pig of each pair was allowed to first individually explore the arena before joint foraging with a NI-pig. Observation of foraging behaviors in the NI-pigs revealed that they followed the I-pigs to the baited buckets in pair trials rather than investigating the buckets at random as in the search trials during training. At least six of the eight NI-pigs exploited their I-partners by displacing them from the food bucket and consuming the food bait.

The following can be observed using the Pig Foraging Arena:

The Pig Foraging Arena offers the opportunity to create different combinations of bucket placement as well as vary the number of buckets used to allow the study of spatial navigation and memory abilities in pigs. The arena is large enough to accommodate multiple subjects at a time, thus allowing assessment of social influence on behaviors, such as foraging. The Pig Foraging Arena can also be adapted for different experimental protocols such as those exploring preference behaviors. The buckets in the apparatus are designed to allow the placement of feed or substances under the mesh cover. This design helps in minimizing olfactory cues and also in assays where the rewards are to be made inaccessible. The arena comes with four exit points, which is useful in quickly removing the subject from the arena and is helpful in assays where reward choice restrictions are to be implemented.