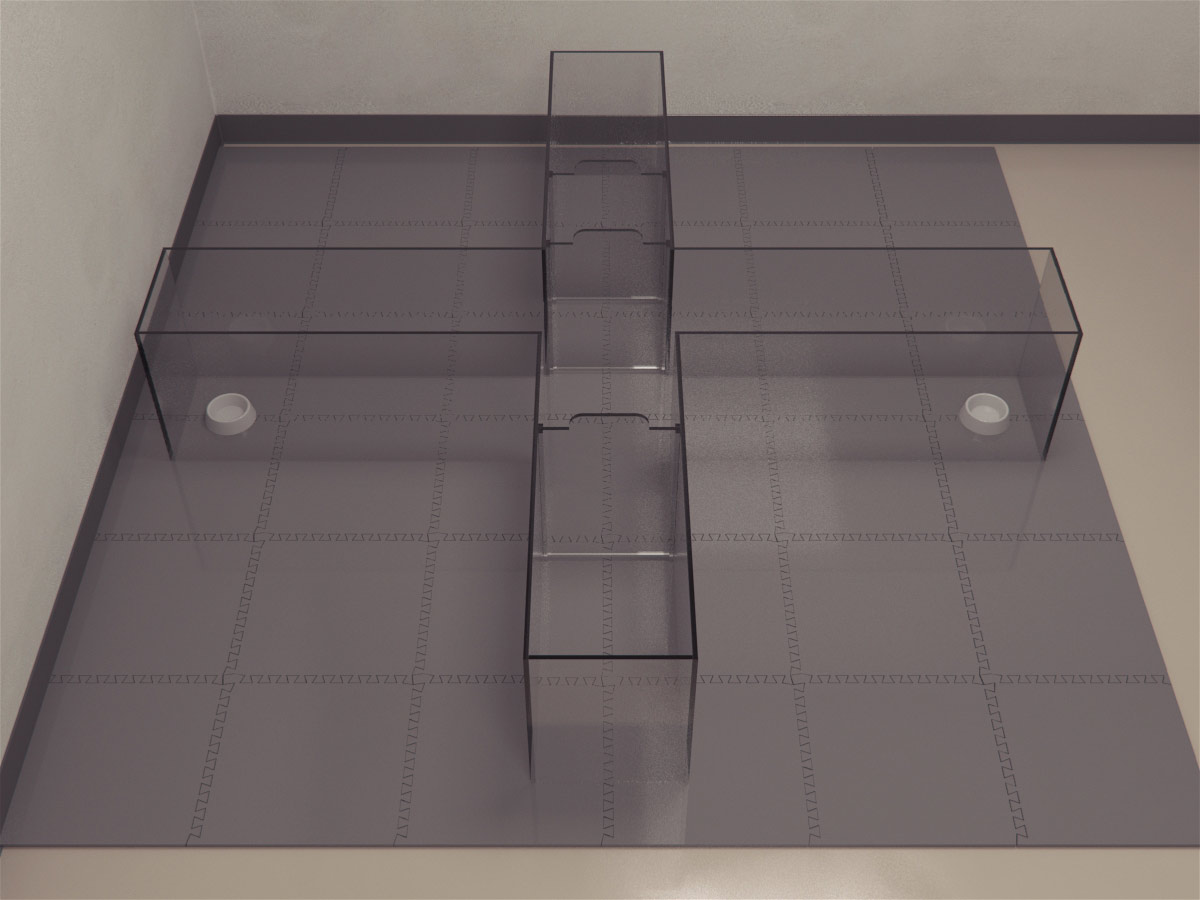 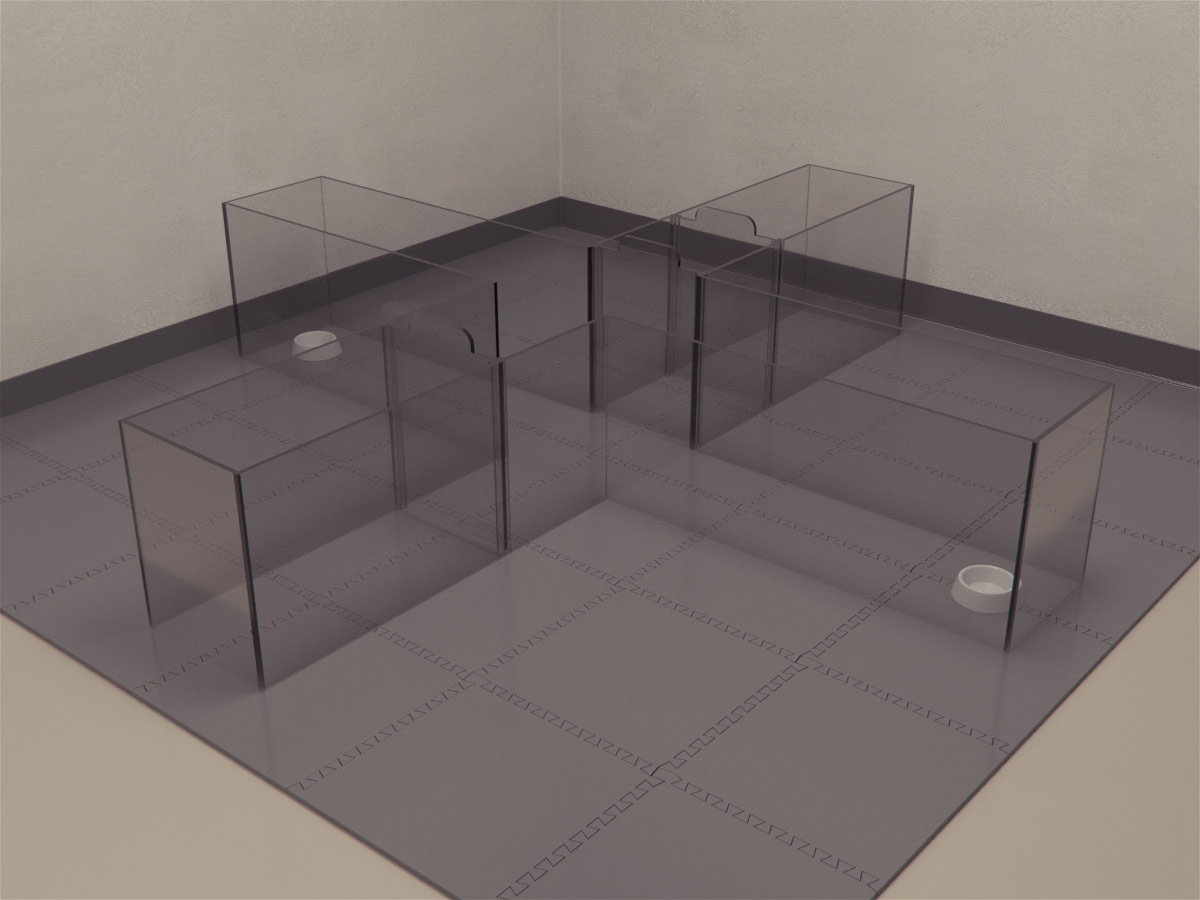 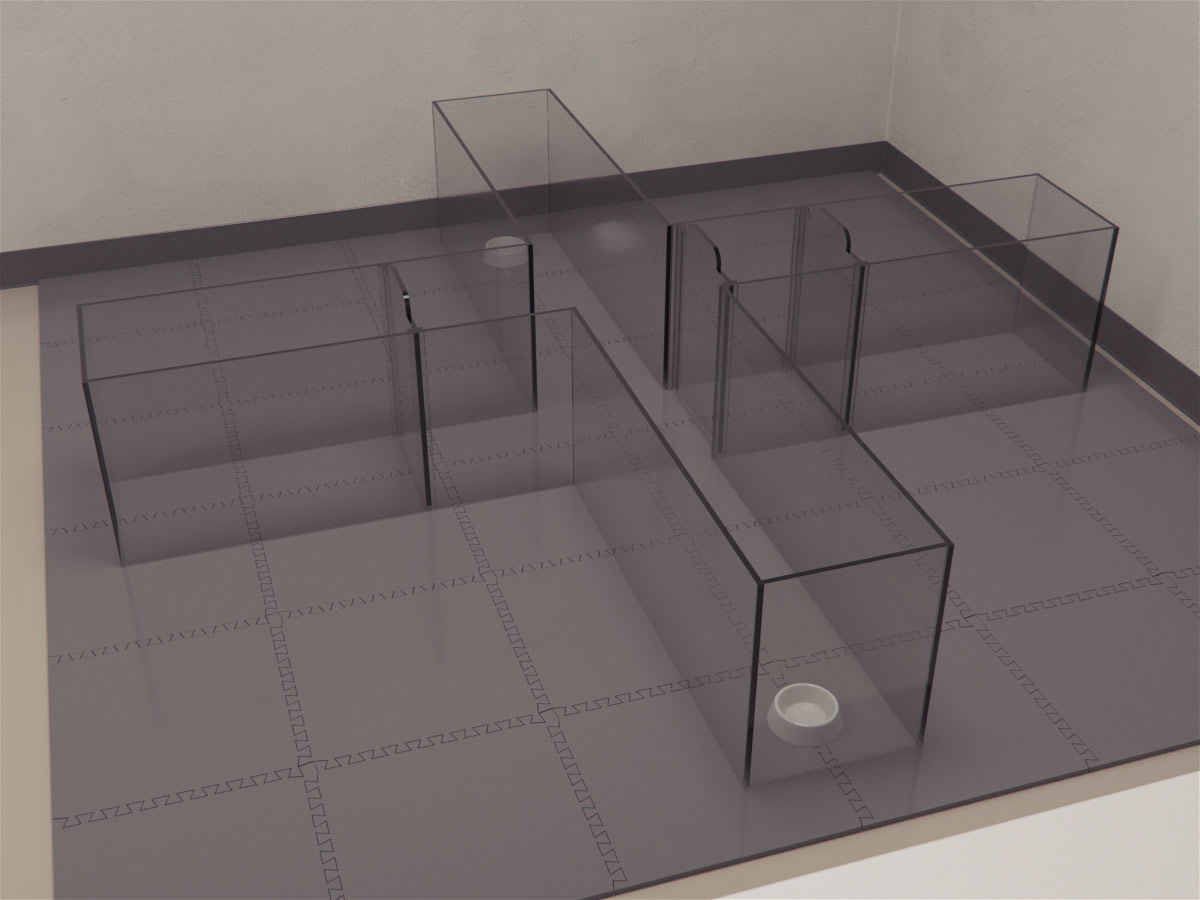 Pigs are an important tool in the research for TBI given their similarity to humans and the 8 arm radial maze is used widely in learning and memory. This maze is based on specifications by Elmore et al (2012) as the first described use in piglets at 2 weeks of age. The Pig T Maze is a clear plastic plus-shaped maze (essentially a double T-maze), positioned over textured black rubber mats. Using a removable barrier, one arm could be blocked off to create a standard T-maze. The plus-shaped design of the maze allowed for the alternation of the start arm during testing. Acrylic walls are designed to hold 2 week old piglets for the novel place and direction learning spatial T maze task. 4 PVC bowls are included in your order.

The porcine brain is a useful experimental model to test out drugs and behavioral alterations due to the comparable anatomy, growth, and development of piglets to human infants compared to laboratory rodents. Furthermore, the piglet is an ideal candidate for carrying out experiments due to their precocial nature, their easy weaning and due to having far less separation anxiety from their mothers. This allows essential neurodevelopmental and cognitive investigations to take place which assess early life insults like infection or nutritional deficiencies. (Elmore et al., 2012)

The pig T maze is different from the rodent T maze in that it has a plus-shaped design. This allows cognitive behavioral tasks to take place which assess the ‘place’ and/or ‘direction’ learning of the subjects. The plus-shaped design of the T maze makes it possible to have two start arms (north or south), as a well as giving the option of having two reward arms (east or west). This makes it possible for the piglets to employ allocentric mechanisms to complete the task instead of using an egocentric mechanism. The allocentric mechanism relies on using visual cues to solve the task and allows better measurement of defects in memory and learning, which is particularly useful to assess the effect of hippocampal lesions (Elmore et al., 2012). Learning and memory tasks are the function of the hippocampus. Any injury to the hippocampus can result in the loss of the ability to acquire and retain new information, particularly information which is related to learning spatial tasks and utilizing contextual background cues (Jarrard et al., 1995).

Other than assessing the effect of traumatic hippocampal lesions, the T maze makes it possible to assess the effects of drugs and chemicals which impact learning and memory by interfering with the mechanism of the hippocampus, for example, scopolamine. Hence, this allows for the investigation of the impact of environmental insults on the neurodevelopment of neonatal piglet brains. Furthermore, the hippocampus is sensitive to experimental manipulations and dietary changes which allow multiple variables to be measured via the modified T maze which is particularly developed to have a hippocampal dependence on the spatial tasks carried out within it. There is also the additional use of a start box to minimize handling right before the experiment starts to improve the circumstances under which the behavioral task is carried out. (Elmore et al., 2012)

The Pig T-maze is a double T-maze, that is, it a clear plastic plus-shaped maze which is positioned over textured black rubber mats. It is possible to create a standard T-maze by blocking off one of the arms, using a removable barrier. This feature makes it possible to use two of the arms of the maze as start arms (north and south) whereas the other two arms (east and west) act as reward arms. This ability to alternate the arms allows the subject to solve the task using allocentric mechanisms instead of egocentric ones. The arms are 91cm x 30 cm with a wall height of 50 cm.

Colored posters in the piglets’ dichromatic vision spectrum can be used as extra-maze visual cues which are attached to opaque curtains draped around the perimeter of the testing arena. In addition, stationary PVC bowls are placed at the far end of the east and west reward arms. (Elmore et al., 2012)

Pig neonates are brought for experimentation when they are two days old and are fed for two weeks before behavioral testing begins. They are fed once every hour for 18 hours with a 6-hour period of starvation. During testing, each PVC bowl contains approximately 3 ml of chocolate milk. This prevents the subject from being directed towards the correct arm based on olfactory cues. Both bowls are covered with an opaque perforated lid, but only one is accessible to the subjects. This also eliminates visual cues while making sure only the correct bowl is accessible. Chocolate milk is not provided outside the setting of the experiment to maintain high motivation.

A video camera is mounted from the ceiling above the arena to record the movements of the subjects while movement is tracked live using Noldus Ethovision XT (Elmore et al., 2012)

Animals are habituated to handling by experimenters through cleaning and feeding multiple times per day. Additionally, the subjects are made to explore in the maze for 5 min every day for a week before the behavioral testing to get habituated to the new environment.

Behavioral testing begins 14 days after the start of the experiment. The experiment is conducted every day following the 6-hour period of nightly starvation. The subjects complete 10 trials daily for a total of 13 days. The initial 9 days of testing comprise the acquisition phase in which the subjects learn to locate the milk reward in a constant place in space and direction, using extra-maze visual cues. The success of acquiring the task is assessed by applying a performance criterion of 80% correct decisions. The acquisition is followed by a reversal phase, in which a previously incorrect arm is deemed as the correct arm with the reward.

The experiment starts with the subjects being placed in the start arm (either the north or south arm based on pseudorandom selection). Each trial is started off with the experimenter removing the clear removable barrier to release the subjects into the maze. A start box is used to allow the subjects to transition into the maze easily from the home cage to reduce the stress of physically transporting them by carrying them from the home cage. In each trial, every subject is given 60 seconds to choose between the east or west arm. Upon choosing the correct arm, the subject receives a chocolate milk reward. After the reward has been consumed, the subject is placed in the start box again in preparation for the next trial. If the subject is making incorrect decisions on day 1 and 2 of the acquisition phase, the subject is allowed to retrace its steps and locate the reward in the correct arm. However, this retracing is not allowed from the third day of the acquisition phase. While the subject is in the start box, the experimenter refreshes the milk rewards, along with mimicking replacement for the incorrect bowl. In addition to this, the whole maze is wiped clean with 70% ethanol if drips of milk are present or if any urination or defecation has taken place in the maze.

In this phase of the experiment, the subjects are obtained, housed and raised in the same manner as described above. The difference comes in the behavioral testing in which the piglets are injected i.m with scopolamine or PBS 15-30 min prior to the initiation of testing each day of the behavioral testing. The site of administration of the injection is varied to prevent soreness. This phase of the experiment is done to assess how the learning of the subjects is affected by the injection of scopolamine.

The following parameters are recorded to carry out data analyses:

These parameters are measured for both the control group and for the scopolamine group to make comparisons regarding how the cognitive function of the subjects is affected.

The plus-shaped design of the T-maze allows for the experiment to force the subjects to choose between two reward arms. This allows for the use of allocentric mechanisms of learning and behavior to be employed for better hippocampal lesions assessment. Furthermore, the start box reduces non-compliance and excessive handling right before the experiment starts. Odor cues are quickly eliminated by wiping down the maze. Additionally, there are several advantages to using a piglet. This is because the neuroanatomy of a piglet closely resembles that of a human infant. Furthermore, piglets are easy to wean and handle.