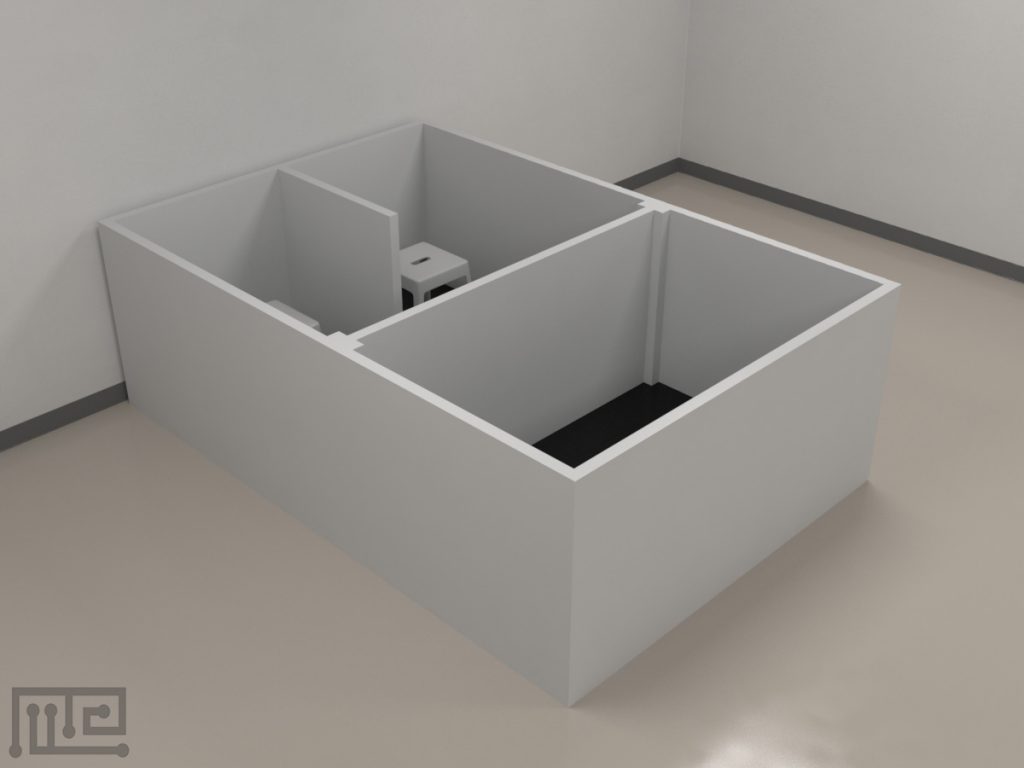 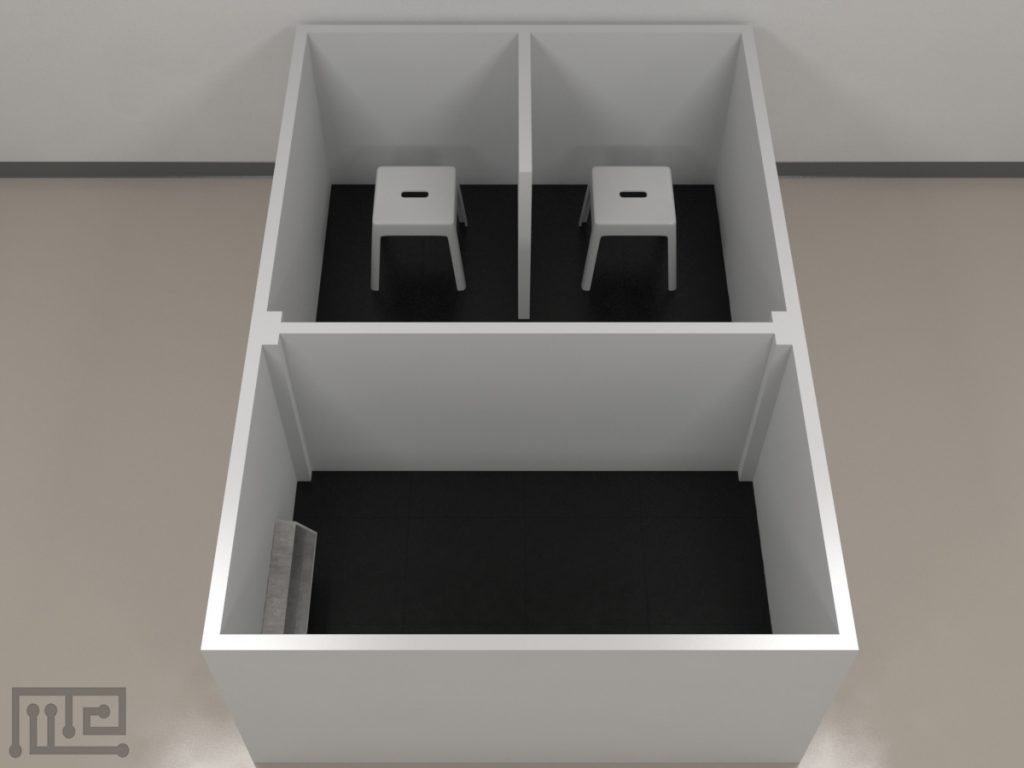 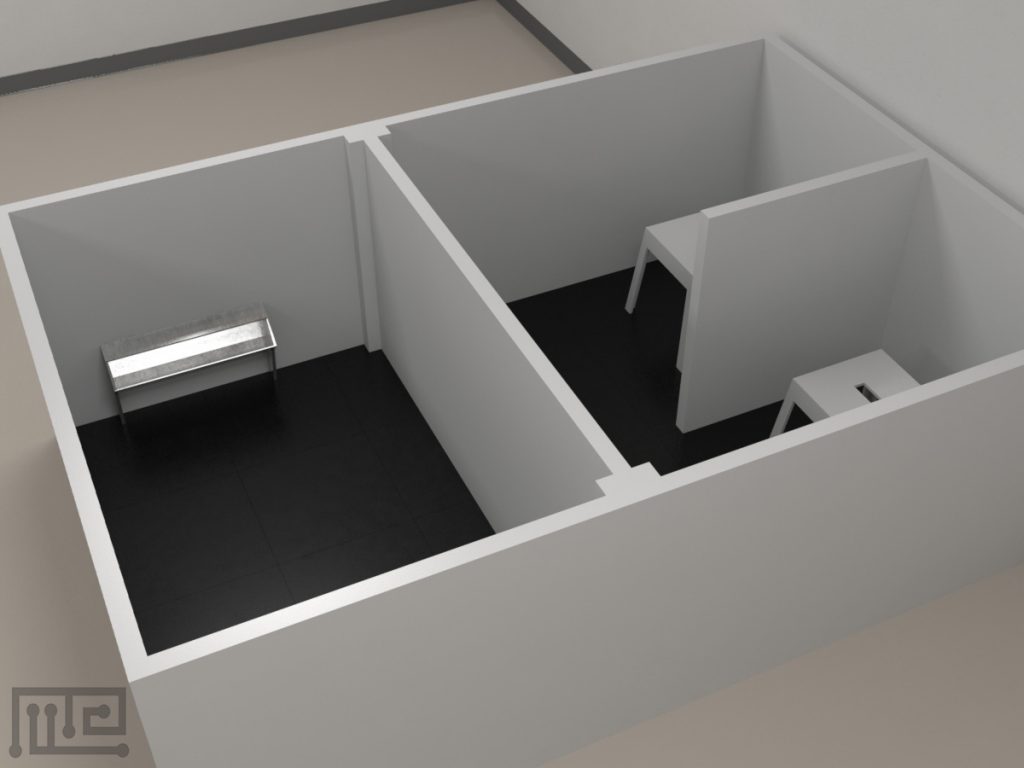 The Piglets Removable Y Maze was used by Sophie Brajon et al. (2015)in study aimed to determine the extent to which weaned piglets can discriminate familiar humans and generalise their past experience when faced with unfamiliar humans

The maze is an acrylic removable Y-maze with low-wall. A board is used to isolate piglets on the trough side while the handlers enter the pen to sit on the stools on each side of the Y-maze low-wall.

Each handler area is represented by the square where she sits behind the virtual dotted white line.

The piglet removable Y-maze is used to study learning, memory, and choice behaviors in piglets. It is a variation of the rodent Y-maze used in the assessment of choice behaviors. It consists of an open arena that has a removable low wall divider inserted on one side, forming two choice compartments, thus creating a Y shaped apparatus.

The piglet removable Y-maze provides a simple environment to evaluate responses in piglets to stimuli simultaneously. In domestic pigs, human interactions are quite common; Positive or negative experiences with handlers can often be observed to affect their behaviors (Brajon, Laforest, Bergeron, Tallet, & Devillers, 2015). The piglet removable Y-maze can be effectively used to observe changes in preference behaviors and other behavioral changes resulting from previous handling experiences. In addition to observation of handling-influenced behaviors, the maze can also be extended to responses to other stimuli and conditions such as different environmental set-ups and sociability. Further, the effects of diseases and disorders, brain lesions, or pharmacological manipulations on learning, memory, and choice behaviors can also be evaluated.

The piglet removable Y-maze also allows the creation of an isolation area for the subjects through the insertion of a removable isolation board separating the start area from the choice area. This prevents the piglets from having immediate contact with the stimuli as they enter the maze. Other apparatuses used in the evaluation of behaviors in piglets and pigs include the Piglet T-Maze, the Pig 8 Arm Radial Maze, and the Pig Conditioned Place Preference Chamber.

The piglet removable Y-maze has an overall dimension of 2.79 m x 1.86 m x 0.96 m. It consists of a rectangular open area that has a removable low wall divider (0.84 m) inserted on one side, forming two 0.84 m x 0.9 m choice compartments. The maze also comes equipped with a removable isolation board that can be inserted to separate the start area from the choice area, essentially creating an isolation area for the subjects.

Clean the maze after every trial. Appropriately light the maze. A tracking and recording system such as the Noldus Ethovision XT can be used to assist with observations.

Place the subject in the maze and allow it to freely explore the maze and habituate with the environment for 15 minutes.

Insert the removable low-wall divider 10 minutes before the test. Let the subjects enter the maze and direct them towards the isolation area. Let the humans A and B enter the maze and sit in the two square compartments. After 3 minutes, remove the isolation board. Observe the behaviors of the piglets as they explore the maze for 3 minutes. Alternate the seating compartments for every trial.

Evaluation of perception of humans by piglets

Brajon et al. (2015) evaluated the perception of humans by piglets when placed in a piglet removable Y-maze. The study involved understanding whether piglets could discriminate and recognize familiar humans and whether they could generalize their past experiences with humans when faced with strangers. A hundred and fourteen piglets from 23 litters of Yorkshire, Landrace, and Duroc piglets were used in the experiment. The piglets were submitted to two 5-day conditioning periods of the same or opposite valence (positive and/or negative) given by one (A) or two (A then B) handlers. Reactivity tests were performed before and after conditioning periods with familiar and unfamiliar handlers. It was observed that the piglet’s reactivity to an approaching human was better with familiar handlers. Their reactivity with motionless handlers made them seek interaction even if they had received negative treatment with the handler. Following the conditioning periods, the piglets were subjected to a choice test after treatment with both handlers.  The piglets that received inconsistent treatments chose and approached the handler associated with positive reinforcements, while the piglets from consistent treatments showed no preference of a handler. Behavioral responses of piglets revealed that piglets could generalize their experience after a previous conditioning period.

The following can be observed on a piglet removable Y-maze:

The piglet removable Y-maze is used to study learning, memory, and choice behaviors in piglets. It uses a simple two-choice design that allows a simultaneous view of both the available choices. The piglet removable Y-maze is essentially an open arena when used without the low wall divider and isolation board, which allows for quick adaptation of the maze for different applications and protocols. Experiences and preferences of the subjects play a strong part in their decision-making process; thus, the effectiveness of the maze in behavioral assessment is not reduced. It can also be used to test the effects of diseases and disorder, brain lesions, or pharmacological manipulations on learning and memory behaviors.

Consistent and inconsistent treatments by humans with the subjects may affect experimental results. Factors such as age, gender, and strain may affect task behavior. Unintentional stimuli such as auditory, olfactory, or visual may affect the way the subject performs the task. The subject’s explorative drive is necessary for the completion of the task.