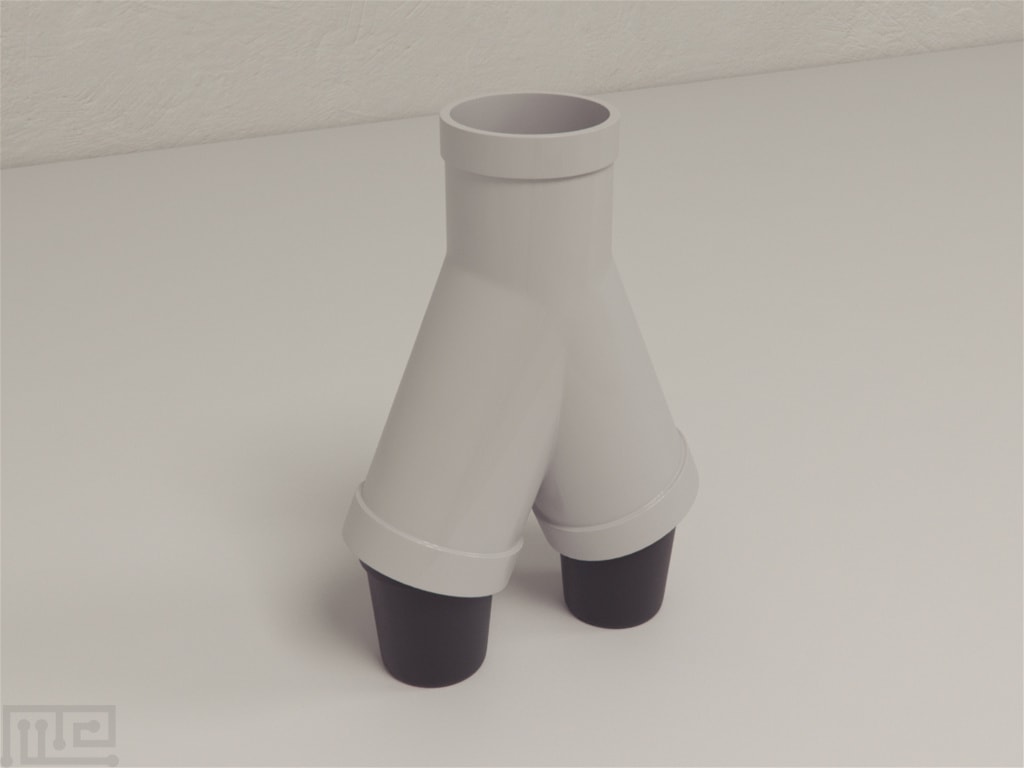 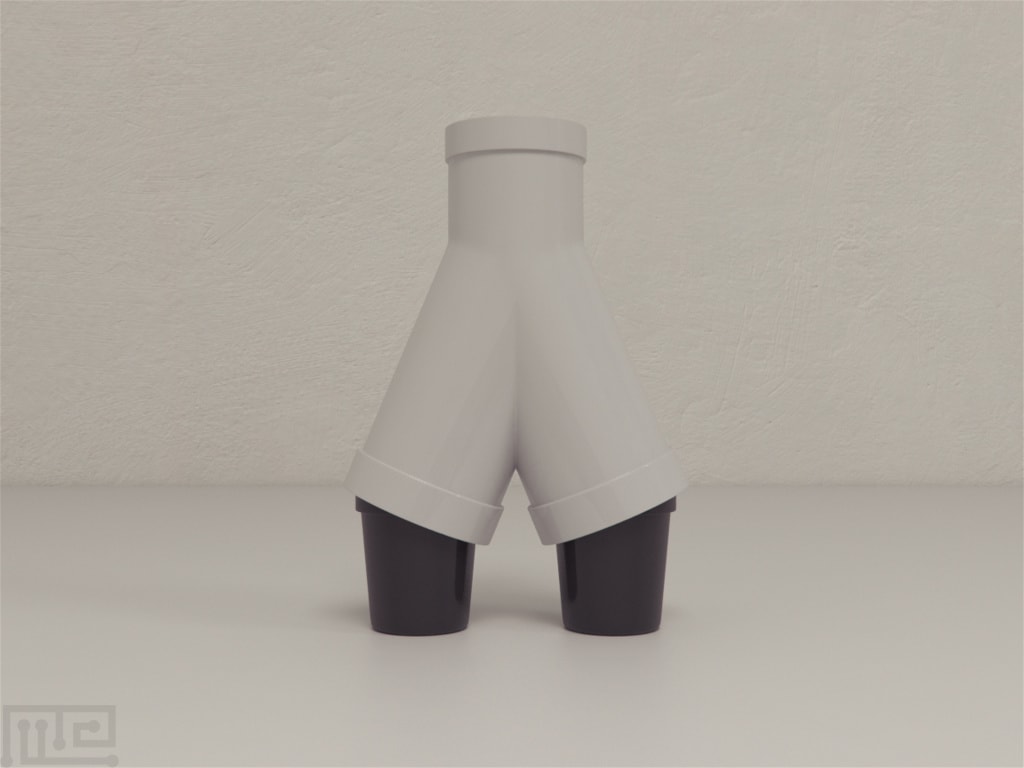 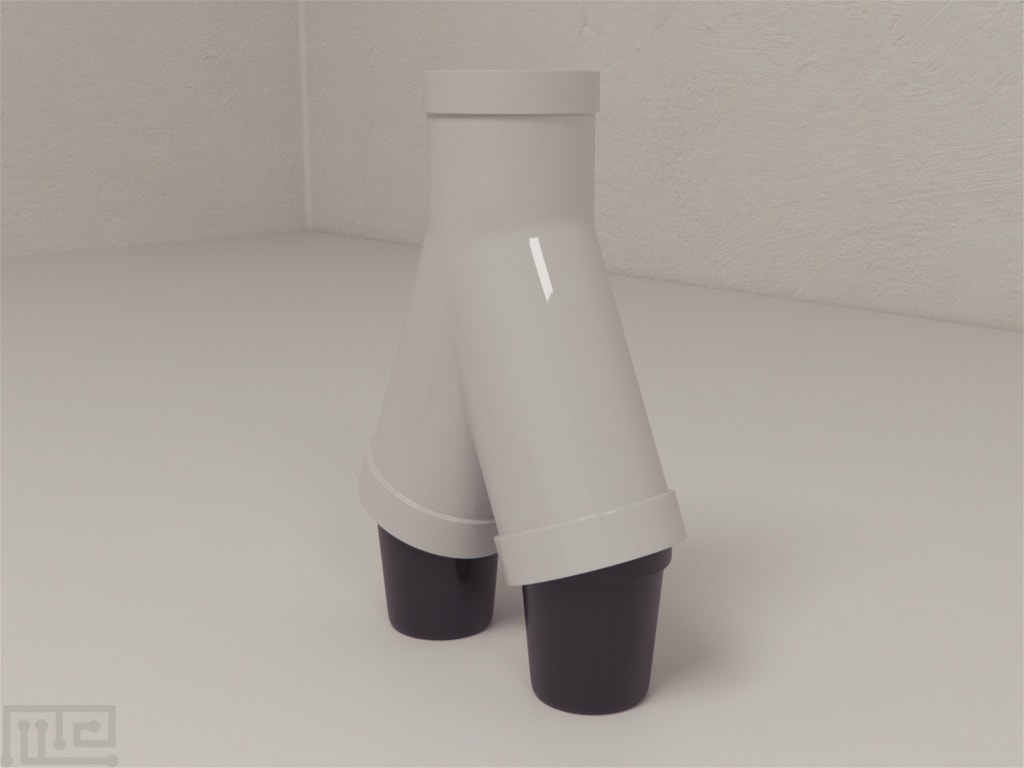 This Y maze for plant rooting behavior, originally used in the model organism Pisum sativum, can be broadly used for interrogating the mechanism by which roots sense and locate water and other stimuli. The device is made of PVC plastic. It can be filled with soil and comes with two tightly fitting small black plastic pots and two transparent rectangular plastic trays at each lower end.

The Plant Y-Maze is used in the investigation of foraging behaviors in plants. The plant maze is similar in design to the popular learning and memory maze, Y-Maze (see also T-Maze), often used in animal-based researches involving spatial learning and memory. The Plant Y-Maze assists in observing acquired learning behaviors in plants by taking advantage of their phototropism and hydrotropism.

The maze can be used as an upright ‘Y’ to evaluate their phototropic responses or as an inverted ‘Y’ to evaluate hydrotropic responses in foraging behaviors. Apart from evaluating the roles of light and water in influencing the growth direction of the plant, effects of other environmental and non-environmental conditions and stimuli, such as temperature, wind, and sound, on plant behaviors can be observed in the Y-Maze.

The Plant Y-Maze consists of a ‘Y’ shaped pipe that can be used to observe root growth as well as shoot growth in response to different conditions and stimuli. The maze is also equipped with two opaque plastic pots and clear plastic trays. Other apparatuses used in the field of plant research include Mimosa Habituation and Plant Communication Apparatus.

The Plant Y-Maze apparatus consists of a ‘Y’ shaped PVC pipe, two small black plastic pots, and two clear plastic trays. The Y-Maze is 10.5 cm high, and the arms bifurcate at 6.5 cm from the base. The base arm has a diameter of 5.5 cm while the bifurcating arms have a diameter of 6 cm and a length of 4 cm. The bifurcating arms are spaced apart from each other at an angle of 45-degrees, and the junction has an overall width of 9.5 cm. The black plastic pots have a depth of 4.5 cm, and their 5.5 cm diameter provides a tight fit around the maze tubings. Two plastic trays (9 x 7 x 4.0 cm) are placed under the pots.

Prior to use, the Y-Maze apparatus must be cleaned to limit the influence of any residual stimuli on the behaviors of the plants.

Garden pea seedlings were evaluated using a classical conditioning paradigm in the Y-Maze. For the investigation, a fan blowing air served as the conditioned stimulus, and a blue LED served as the unconditioned stimulus. The seedlings were divided into 2 experimental groups that either received exposure to both fan and light in the same maze arm (F+L) or in opposite arms (F vs. L), prior to being tested. The conditioning was done for 3 sessions per day for 3 days using a forward delay conditioning wherein the fan stimuli always preceded the light stimuli by an hour and overlapped for 30 minutes. Also, to prevent predictability of the direction of the light stimulus, the positions of the stimuli were alternated between the arms for every session. In the test sessions, the fan was placed in the arm opposite to the last light exposure for the F+L group and in the arm that received light exposure last for F vs. L group. It was observed that 62% of the seedlings in the F+L group grew towards the fan arm while 69% in the F vs. L group grew in the arm opposite to the fan. Thus, it was concluded that the plants were able to form associations to modify their behaviors for successful foraging. (Gangliano, Vyazovskiy, Borbély, Grimonprez & Depczynski, 2016)

Investigation of root growth in response to the sound of water

Garden pea seedlings were observed for their hydrotropic response when presented with the sound of running water without actual access to water. A baseline experiment was conducted prior to the actual test in which seedlings were evaluated for their hydrotropic response to actual water gradient in one of the Y-Maze pots. The response to the sound of water was investigated by wrapping a flexible tubing, that had continuous water flow, around the base of one of the pots in the Plant Y-Maze. The other pot did not receive any treatment. The primary root directional growth frequency of this experiment was compared with the baseline experiment on day 5. The seedlings showed similar success to baseline test in locating the pot associated with water despite the absence of actual water in the soil. Based on the observations made, it was concluded that plants are capable of responding to the acoustic vibrations of flowing water. (Gangliano, Grimonprez, Depczynski & Renton, 2017)

Investigation of root growth in response to co-occurring cues

Garden pea seedlings were evaluated for their root directional response to recordings of flowing water and presence of actual water. This experiment involved an investigation of whether the plant was able to distinguish between the acoustic vibrations and sensory information available to reach the actual water. The pea seedlings were placed in the stalk of the Y-Maze in which one pot received recorded audio treatment while the other pot had water placed in the transparent tray underneath it. A significant number of seedling roots directed growth towards the pot that had access to actual water. The result suggested that, although the acoustic vibrations do rapidly convey the location of flowing water, plants are able to choose the most advantageous cue. (Ganglino et al., 2017)

The Plant Y-Maze is primarily used to investigate foraging behaviors of plants by observing the rate of growth and the direction of growth of roots or shoots in response to different treatments and stimuli. The observations are made by removing the plants from the apparatus and washing of the roots to visually inspect the response behaviors.

The Plant Y-Maze allows the observation of foraging behaviors of plants when exposed to different stimuli and growth conditions. Further, the maze can be used to evaluate the implications of different environmental conditions such as response to the scarcity of water. The effects of noise, air, water, and land pollution can also be investigated using this maze. Additionally, the effects of different drugs and compounds on the growth behavior can also be observed. The Plant Y-Maze is easy to construct and use. The plastic pots provide a snug fit when used with any of the maze arms.

The Plant Y-Maze may not necessarily mimic the overall natural environment for the plant. Presence of any unintentional stimulus can potentially affect the process. Certain constraints of the protocol may limit the regular measures of rate of growth of the plant. While evaluating hydrotropic behavior, it should be taken into consideration that other responses such as gravitropic and magnetotropic responses may be at play. Maintenance of experimental conditions, such as temperature and humidity, throughout the test is crucial for obtaining correct results.