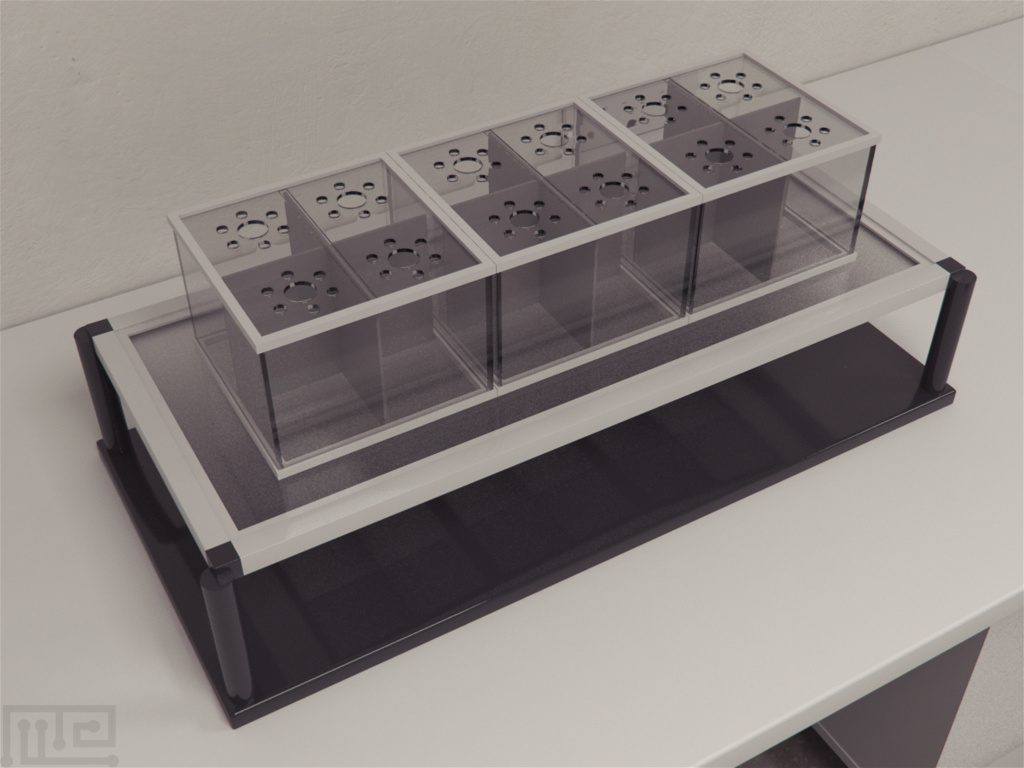 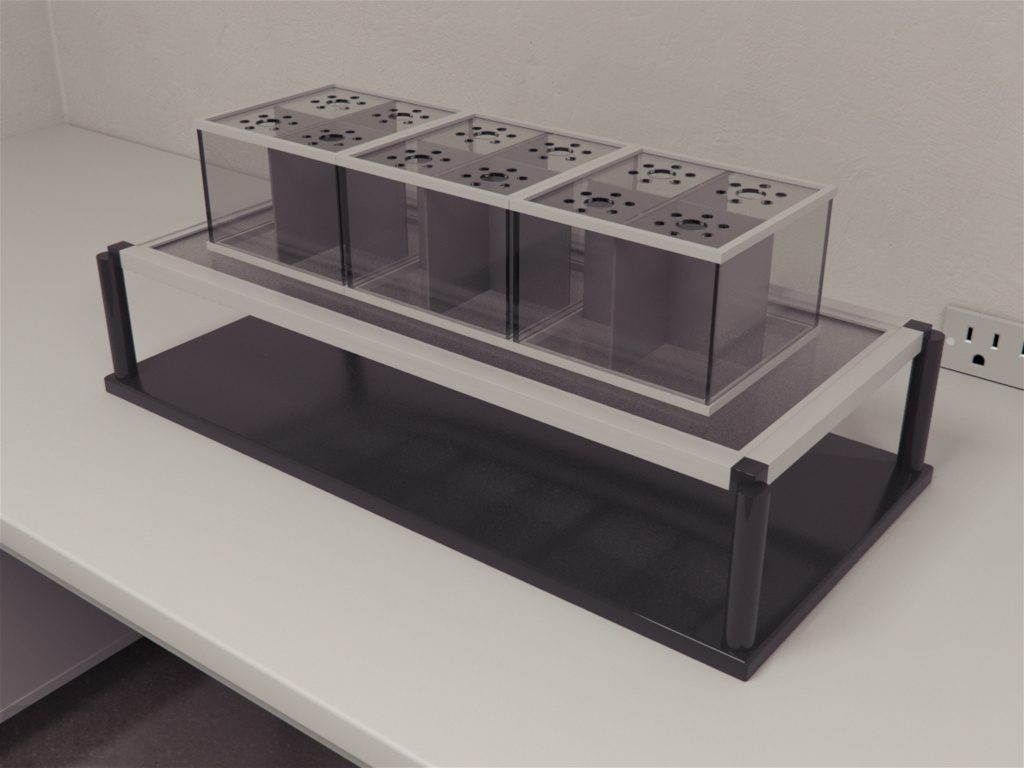 Thermal withdrawal latency was first described by Hargreaves et al (1988). It is a widely used test for thermal stimuli response. In this procedure, a rodent’s hind paw is exposed to a beam of radiant heat through a transparent glass surface using the plantar analgesia meter. The latency to withdraw to the heat stimulus is recorded as the time for paw withdrawal in both injured and uninjured hind paws.

Hargreaves Plantar test apparatus is composed of an emitter/detector vessel controlled by a controller that allows the manipulation of the intensity of heat, a glass panel, and animal enclosures. The size of the enclosures varies depending on the animal being used. The entire apparatus is usually supported at a height on a platform to allow the placement of the emitter/detector vessel.

The infrared (I.R.) heat intensity of the plantar test instrument can be adjusted in increments, usually set at average paw withdrawal latency of approx 10 seconds in rats.

Hargreaves Plantar test was first described in the literature by Hargreaves and colleagues in 1988 (Hargreaves et al., 1988).  Hargreaves et al. used the test to evaluate cutaneous hyperalgesia resulting from thermal stimulation in rats. The test was designed to assess thermal pain sensations in a specific part of the plantar surfaces of animals. The test has been widely employed in evaluating pain sensitization and pain response in subjects recovering from neural injuries and regeneration. The apparatus and assays similar to the Hargreaves Plantar test include the Tail Flick test, Hot-Cold Plate test, and Thermal Gradient test.

The Hargreaves apparatus consists of glass-floored chambers in which the subject is placed, and a radiant or infrared heat stimulus is applied to the center of its plantar surface from underneath. The tests usually last for a maximum of 35 seconds to avoid tissue damage and unnecessary harm to the animals. To ensure that the temperature of the heat stimulus is not affected, urine must be cleaned up during trials. The use of glass flooring helps minimize the heat-sink effects thus allowing more accurate heat stimulus. In comparison to other thermal stimulus assessments, the Hargreaves test does not subject the entire plantar surface to the heating effect. This allows for overcoming issues of heating irrelevant parts of the subject, and that could potentially influence the response of the subject.

Hargreaves Plantar test apparatus is composed of an emitter/detector vessel controlled by a controller that allows the manipulation of the intensity of heat, a glass panel, and animal enclosures. The size of the enclosures varies depending on the animal being used. For mice, a compartment of 10 x 10 cm and a height of 15 cm is usually used. The entire apparatus is usually supported at a height on a platform to allow the placement of the emitter/detector vessel.

Before beginning the experiments, the apparatus must be thoroughly cleaned. The performance can be recorded and observed using a tracking and recording system such as the Noldus EthoVision XT.

Place the subject in its compartment and allow it to acclimate for 15 to 20 minutes. Setting the desired infrared intensity, position the emitter/detector vessel directly under the center of the paw being tested. Start the timer and the infrared light at the same time and observe the subject for pain-elicited behaviors until the cut-off time (usually 20 to 35 seconds) for the experiment has been reached. Repeat trials as necessary with at least a 5-minute inter-trial interval. Licking or shaking of the stimulated paw signs behavior associated with pain.

O’Brien et al., 2013 investigated whether Nf1 heterozygosity resulted in increased pain and itch behaviors in mice. For their study, they used seven-to-ten-week-old male Nf1+/− and wild-type littermates. Subjects were placed on a pre-warmed (~30°C) glass plate in their individual chambers. The radiant heat stimulus was applied at an active intensity of 17% maximal for 20 seconds. The next day, subjects received an inflammatory mediator injection, and withdrawal latency was obtained at hourly time points by averaging two measurements per paw during that hour. Data analysis revealed no influence of Nf1 heterozygosity in increasing pain intensity in the subjects.

Sprague-Dawley rats were divided into 4 treatment groups: normal saline, fentanyl, incisional, and fentanyl + incisional. Fentanyl (60 µg/kg) or normal saline injections were given subcutaneously at intervals of 15-minutes, 4 times in volumes of 1.2 ml/kg. Behavioral testing of thermal-induced pain was performed on the Hargreaves apparatus. Subjects were placed in their compartments on the glass plate. A 30 W intensity beam was directed at the sole near to toes, ipsilateral and contralateral to the surgical site. The observation period was set to 20-seconds. Paw withdrawal latencies revealed that perioperative fentanyl and surgery-induced ipsilateral thermal hyperalgesia were more severe than that induced by fentanyl only. Further, perioperative fentanyl led to the aggravation of postoperative ipsilateral thermal hyperalgesia induced by surgery. However, thermal hyperalgesia in contralateral sites was weaker than in ipsilateral sites in incisional and fentanyl + incisional groups. (Chang et al., 2018)

Evaluation of the anti-nociceptive effect of agrimonia eupatoria

Lee and Rhee investigated agrimonia eupatoria extract for its anti-nociceptive effects. Sprague-Dawley rats were used as a cisplatin-induced neuropathic pain model to test the effectiveness of argrimonia eupatoria extract. The subject’s thermal stimulated pain response was calculated before and after the injections. In the plantar test, each hind paw was tested thrice with at least a minute’s interval. The results suggested that the extract showed a significant increase in paw withdrawal latencies in the first week of treatment. However, there was no consequent increase in the effect in the following weeks. In comparison to the gabapentin treated group, argrimonia eupatoria extract proved to be more potent in preventing thermal hyperalgesia induced by cisplatin.