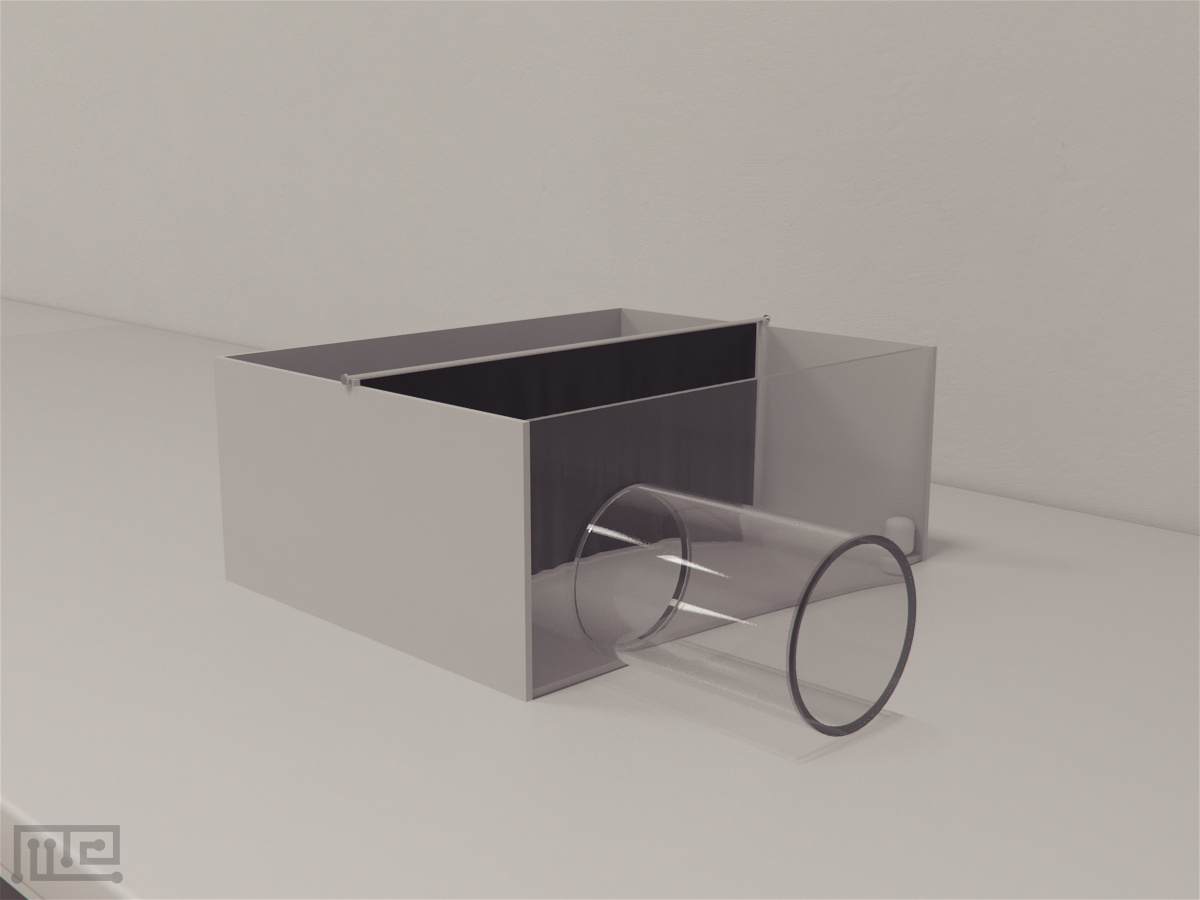 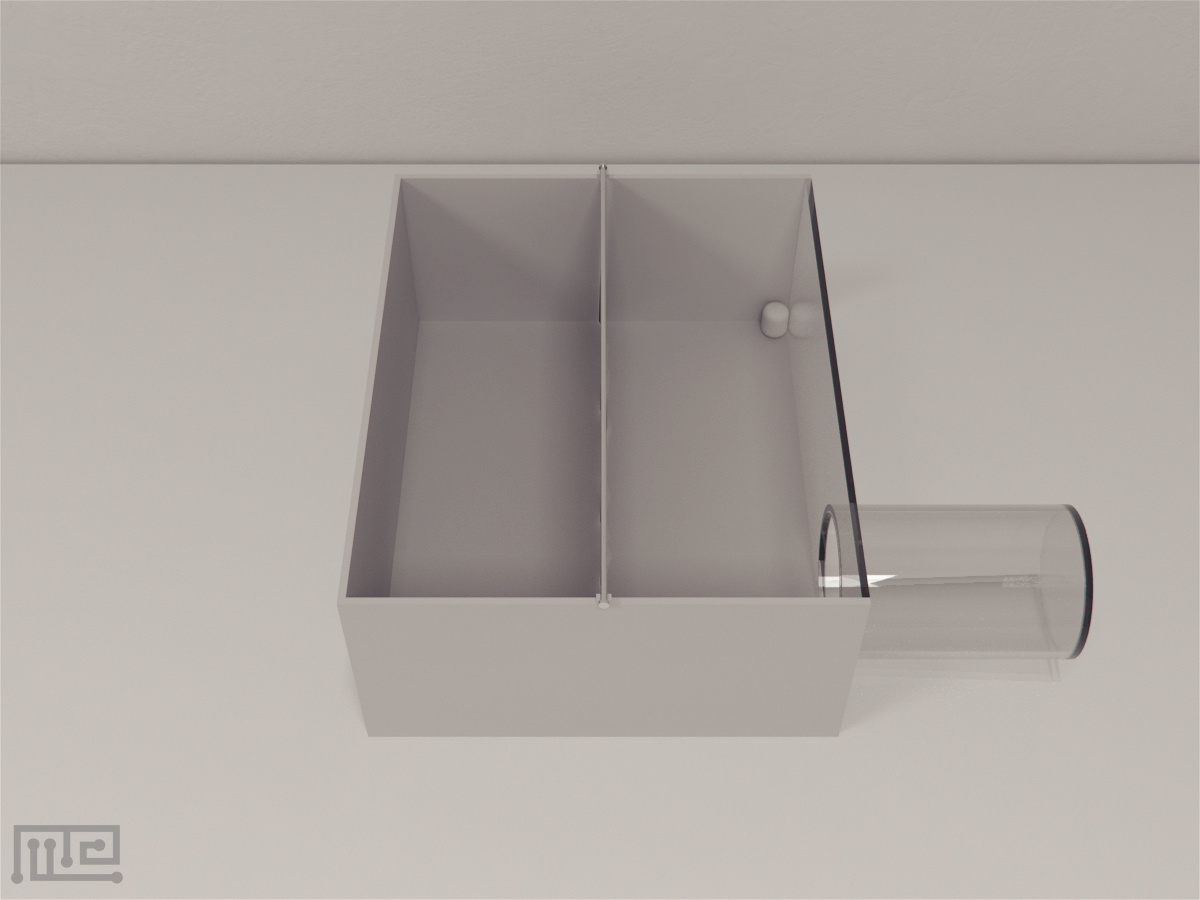 The Predator Odor Exposure Test (POET) is used to investigate the neurobiology of anxiety and innate defensive behavior of rodents in response to odoriferous stimuli.

The test apparatus is a clear rectangular acrylic cage consisting of a circular opening in one of the walls to connect the entrance module. The middle of the cage contains a plastic blind, dividing the inner space of the cage into two compartments. The cage apparatus can be covered with a transparent plastic sheet to provide odor insulation.

The odor source (a cotton swab impregnated with odoriferous solutions) was attached to the cage corner on the right side of the entrance opening.

A rat is placed in the entrance module that was immediately connected to
the apparatus cage. Next, a 600s session of free behavioral recording using a video camera was conducted. In order to avoid cross-contamination of the odors, one kind of odor was tested as a treatment per day, and the apparatus cleaned with ethanol between sessions.

The Predator Odor Exposure Test (POET) is used to investigate the neurobiology of anxiety and innate defensive behavior of rodents in response to odoriferous stimuli. Predator olfactory cues such as those from predator feces, urine, fur, and skin elicit anti-predator responses such as avoidance, freezing, and increased vigilance in rodents. These responses can be easily and safely obtained using the POET.

Fear serves as a crucial factor in survivability. Deficits in fear can have a significant effect on the animal’s behavioral responses to dangerous and threatening encounters. The Predator Odor Exposure Test is based on the well-established fear conditioning paradigm (see also Fear Conditioning Chamber) wherein the subject is exposed to a fear-inducing stimulus, predator odor. The POET uses a simple set-up that includes a transparent acrylic box that is divided into two parts using an opaque curtain. One half of the chamber has an entry point and also holds the predator odor, while the other half behind the curtain creates a safe space for the subject. Pharmacological manipulations, brain lesion, diseases, and disorders can result in impaired fear-responses, resulting in the subject spending more time exploring the predator odor side and showing lower levels of anxiety than subjects without any impairments.

In addition to exploring fear-responses and defensive behaviors, the Predator Odor Exposure Test can also be easily adapted for different investigations such as drug testing. The POET can also be used in the investigation of sociability, anxiety, explorative behaviors, learning, and memory. In order to avoid cross-contamination of odor, the top of the cage can be covered. The apparatus also comes equipped with an entrance module that allows easy handling and transportation of the rodent. Other apparatuses also used to study anxiety, risk assessment behaviors and defensive mechanisms include the Odor Span Test (OST), the Open Field Test (OPT), the Elevated Plus Maze, and the Light-Dark Box.

The Predator Exposure Odor Test apparatus is a clear rectangular acrylic cage of 40 cm × 32 cm × 16 cm arena. The cage consists of a 10 cm circular opening in one of the walls to connect the entrance module. The middle of the cage contains a plastic blind of 32 cm× 16 cm, dividing the inner space of the cage into two compartments. The cage apparatus can be covered with a transparent plastic sheet to provide odor insulation.

Remove unwanted contaminants such as feces, urine and the food traces from the floor of the cage apparatus. Ensure that the apparatus is wrapped with a transparent plastic wrap prior to the test to provide odor insulation. Clean the apparatus with ethanol between sessions. For automatic tracking and recording of the animal activity, a system such as the Noldus EthoVision XT can be used.

Place a cotton swab impregnated with odoriferous stimulus at a corner of the Predator Odor Exposure task apparatus. Place the subject into the entrance module and immediately connect it to the apparatus cage. Conduct a 10 min session of free exploration. Test one kind of odor per day in the apparatus to avoid cross-contamination of odors.

De Paula, Gouveia Jr, de Almeida, and Hoshino (2005) studied the anxiety-like behaviors of 31 wild running resistant (WR-r) and wild running sensitive (WR-s) adult male Wistar albino rats in the Elevated Plus Maze and the Predator Odor Exposure Test. The subjects were evaluated either with snake cloacal gland secretion (predator odor) or Iguana feces (control) set-up in the Predator Odor Exposure Test. In general, the exposure of rats to predator odor source induced certain risk assessment behaviors and reduced non-defensive behaviors such as resting, feeding, self-cleaning and body immobility. A counter effect was produced in the risk assessment behaviors when subjects were exposed to control conditions such as iguana feces. The behavioral parameters measured in terms of frequencies evaluated that rats showed an increased prevalence of staring at the odor source, head out, running and wall rearing activities. Additionally, increased defecation was also observed in rats when exposed to predator odor stimuli. It was concluded that the wild running susceptibility in rats is accompanied by increased levels of anxiety and is expressed at much higher levels in WR-s rats. The WR-s rats also showed an increased open-arm-entry ratio in the Elevated Plus Maze task.

The Predator Odor Exposure Test uses a simple design to evaluate innate defensive behaviors and fear responses in rodents. The simplicity of the test design allows adaptation of the apparatus for different protocols and experiments such as the assessment of behaviors associated with stress and neurophysiological disorders. The entrance module allows easy handling of the subject during the trials. The blinds add another element to the apparatus and allow the subject to indulge in defensive behaviors which can be used to assess defensive aggregation, odor memory and perception, and aversive emotions.

Presence of unnecessary and unintentional olfactory, auditory or visual stimuli can affect the performance of the subject. Since the task relies on odor perception, subjects with deficits in their olfactory abilities may not be suitable for the task. The use of the entrance model can potentially cause the subject stress and anxiety. The Predator Odor Exposure Test only mimics the experience of predator exposure; thus, the unnatural nature of the set-up must be taken into consideration while analyzing the data. Factors such as age, weight and sniffing capability of the subject can influence the overall task.