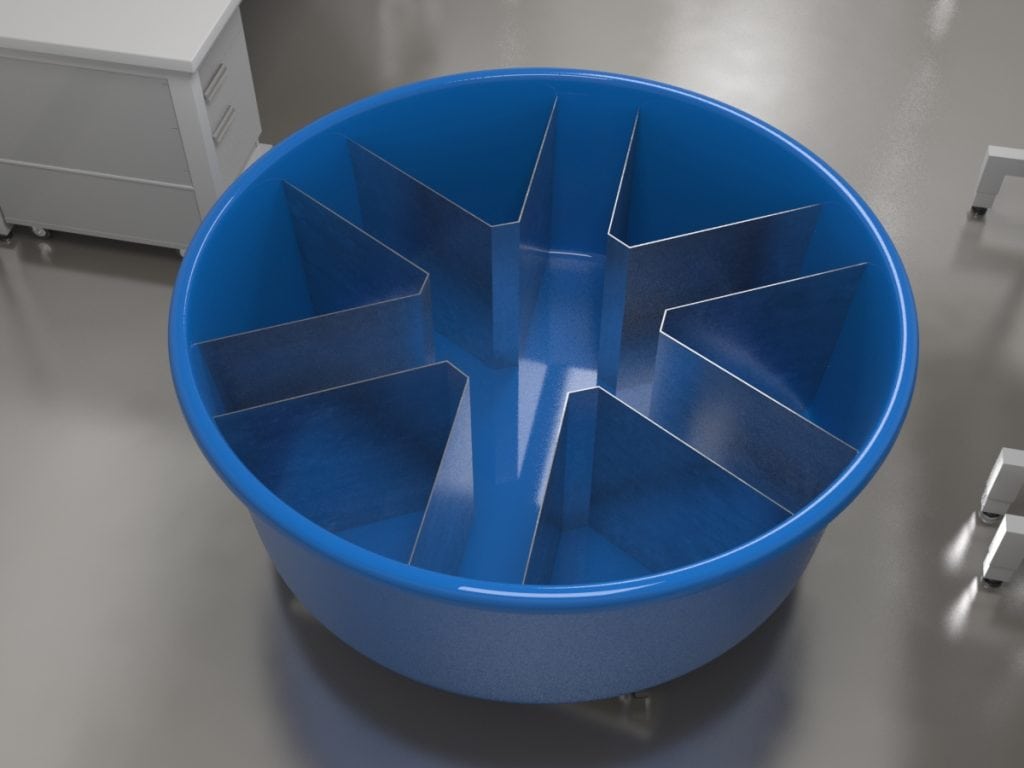 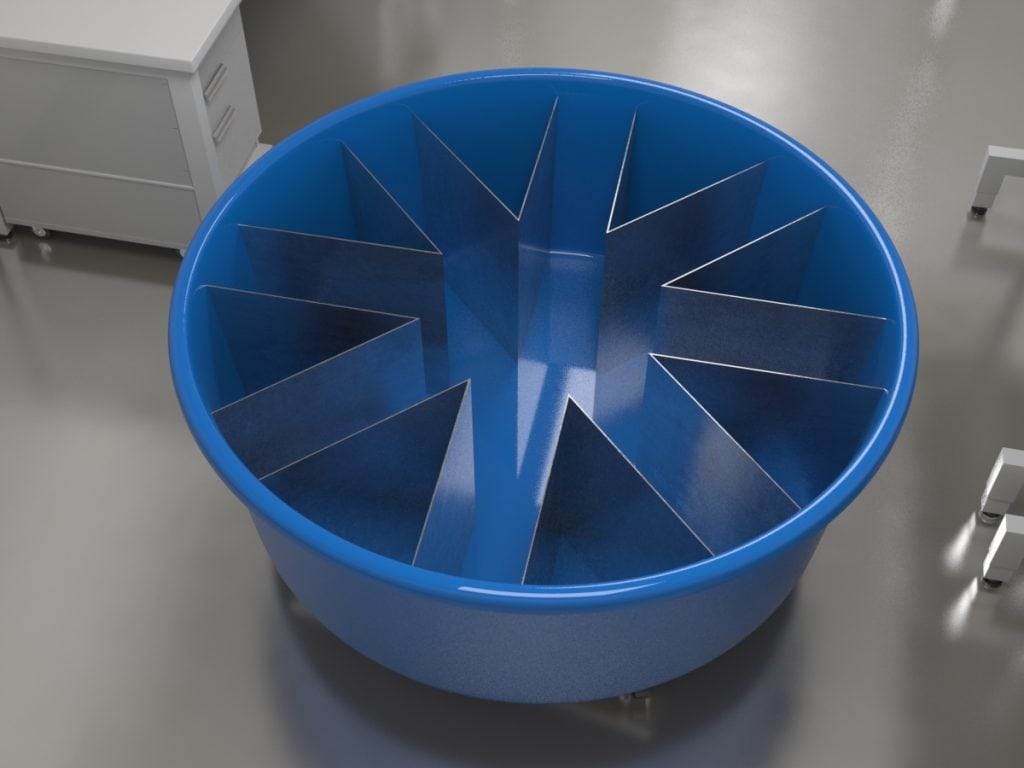 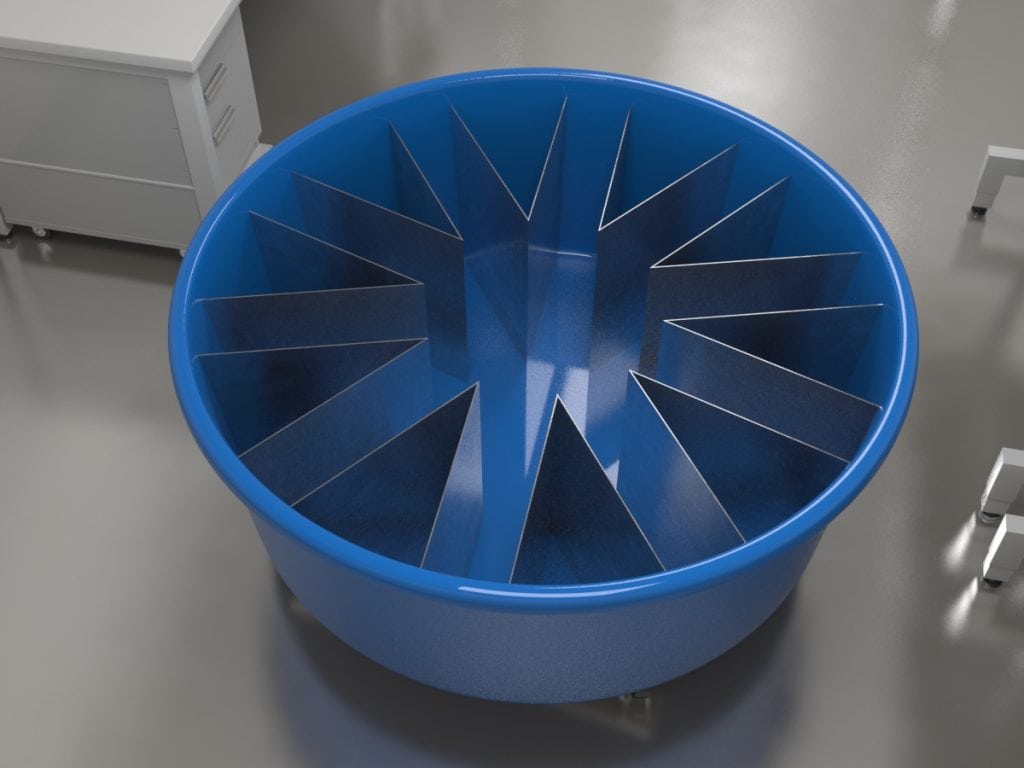 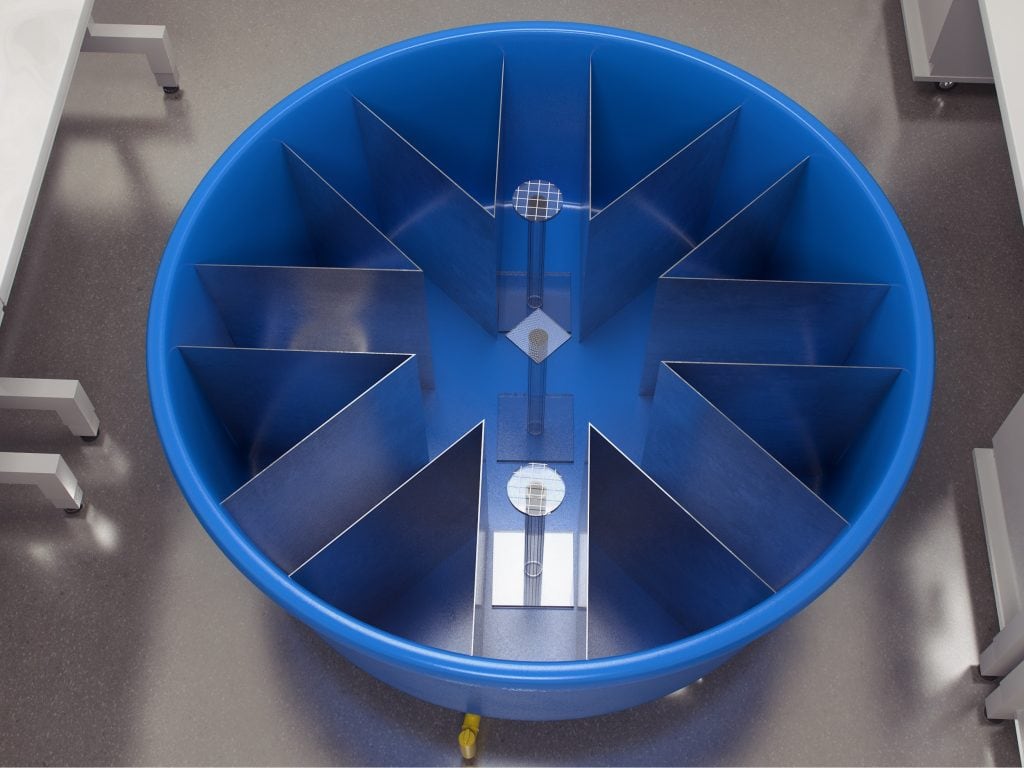 The Radial Arm Water Maze is made from the Morris water maze with radial arm inserts. The inserts add spatial complexity and combine the measures of the dry Radial Arm Maze with the rapid learning and aversive aspect of the Morris Water Maze. Multiple variations are possible from 4 arms to 12 arms. All inserts are made of high quality stainless steel for durable use, easy washing, and extremely stable experimental conditions in the setting of a full tank of fluid in the morris water maze. The MazeEngineers inserts are placed within the 4ft and 6 ft tanks.

The Morris Water Maze was developed by Richard G. Morris in 1984 and has since become a widely used apparatus in studies of spatial memory and learning. Over the course of time, the apparatus has seen many adaptations and modifications to meet the specificity of different investigations. One such modification is the Radial Arm Inserts.

Starting in the late 90’s the Radial Arm Inserts were used in the Water Maze to investigate learning and memory performance in neurodegenerative disorders (such as Alzheimer’s), models of aging (Shukitt-Hale et al., 2004), drug testing (Shear et al., 1998) and even predator exposure (Diamond et al., 1998). The inserts add spatial complexity and combine the measures of the dry Radial Arm Maze with the rapid learning and aversive aspect of the Morris Water Maze.

The inserts can have arms ranging from 4 to 12 and are usually made of aluminum. The inserts are placed within a pool containing water that sufficiently hides the escape platforms. The Radial Arm Water Maze (RAWM) is used for both working memory and reference memory tasks.

The apparatus consists of a pool having an internal diameter of approximately 0.9 to 1.2 m. The pool has a depth of at least 23 to 25 cm. The inserts can be either metal or plastic and are identical in dimensions. The inserts are usually 20 to 30 cm high and have a length of about 60 to 75 cm. The arms are arranged such that the passages created are equally spaced; for a 6-arm maze, the angle of separation would be 60 degrees. The central area is approximately 36 to 40 cm in diameter. The passage widths range between 20 to 25 cm, and the escape platforms are of diameter 10 cm.

The pool is filled with water approximately 10 cm from the top. The inserts are placed within the pool such that the water level is 6 cm under the height of the arms to avoid the subject from climbing over. Next, the escape platforms are positioned in the arms, such that the hidden platform is just covered with approximately 0.5 cm water and the visible platform is not covered.

The entire setup is well-lit, and the water temperature is maintained throughout the session. It is also ensured that the water is cleaned of any debris left behind by the subject. Each arm is labeled for easy identification. Although the experiment is easy to track and record manually, a tracking and video software, such as the Noldus Ethovision XT can also be used to assist in the scoring.

The RAWM used consists of retractable platforms. Surgically treated subjects are placed on the central platform under a Plexiglas cylinder for 10 seconds after which the cylinder is raised, and the central platform lowered forcing the subject to locate the escape platforms under each goal arm. On finding the platform, the subject is allowed 10 seconds rest period after which the escape platform is retracted for the remainder of the trial. The subject is allowed to explore freely until it has found the remaining platforms or until 3 minutes have passed. The subjects are tested over 21 days, on a 4 trial per day basis. (Shear et al., 1998).

Evaluation of the effect of predator exposure on spatial working memory

A 6-arm RAWM is used to investigate the effects of predator exposure on performance of subjects trained on the RAWM. The location of the escape platform is kept the same in a day and is changed across test days. The subjects learn the location of the escape platform during the acquisition trial after which they are removed from the maze for a 30-minute delay period. During this delay period, the subject is placed either in its housing (safe space) or near a predator (unsafe space) (in this experiment the rats are placed close to cats). After the delay period, the subjects are placed back into the maze for a retention trial (Diamond et al., 1999).

Evaluation of the effect of age on spatial learning and memory

Two age groups (young: 6 months; old: 21 months) of rats are used to determine the effect of age on spatial learning and memory in a RAWM task. The subjects are placed in one of the 7 start arms facing the wall. Each subject is given 120 seconds to find the escape platform. On finding the platform, the subject is allowed to rest on it for 15 seconds. The position of the escape platform is maintained for the first 3 days and changed on the 4th day. RAWM testing is performed over 4 days, five trials/day with a 30-minute inter-trial interval (Shukitt-Hale et al., 2004).

The RAWM combines the benefits of both the Radial Arm Maze and Morris Water Maze. The following parameters can be observed and recorded during each trial on the RAWM:

Graphs below allow easy visualization of the observable factors and comparisons.

The below graph depicts the sample data of errors committed by the subjects when they are tested on a retention trial after the exposure to a predator (Diamond et al., 1999).

The following graph shows a sample of the average speed of the subjects in finding the hidden platform for days 1 to 3 and for reversal testing on day 4, in a 5 trial per day session (Shukitt-Hale et al., 2004).

The Radial Arm Water Maze combines the best of the dry Radial Arm Maze and the Morris Water Maze task. The water provides an aversive element which compels the subject to explore the maze for an escape platform. By introducing the radial arm inserts, we can add spatial complexity to the rapid learning water task. The RAWM combines the measure of the RAM task and thus makes data collection a straightforward task. Also, the RAWM eliminates the need for food deprivation or footshock as seen with other tasks. The task is easily adaptable to varying needs of investigations related to spatial learning and memory.

As with every behavioral task, the subjects own behavioral response, and mental stability plays an important role. The subject’s ability to swim can also impact the results. It is important that the subjects are not overworked and inter-trial intervals are maintained to ensure adequate results.