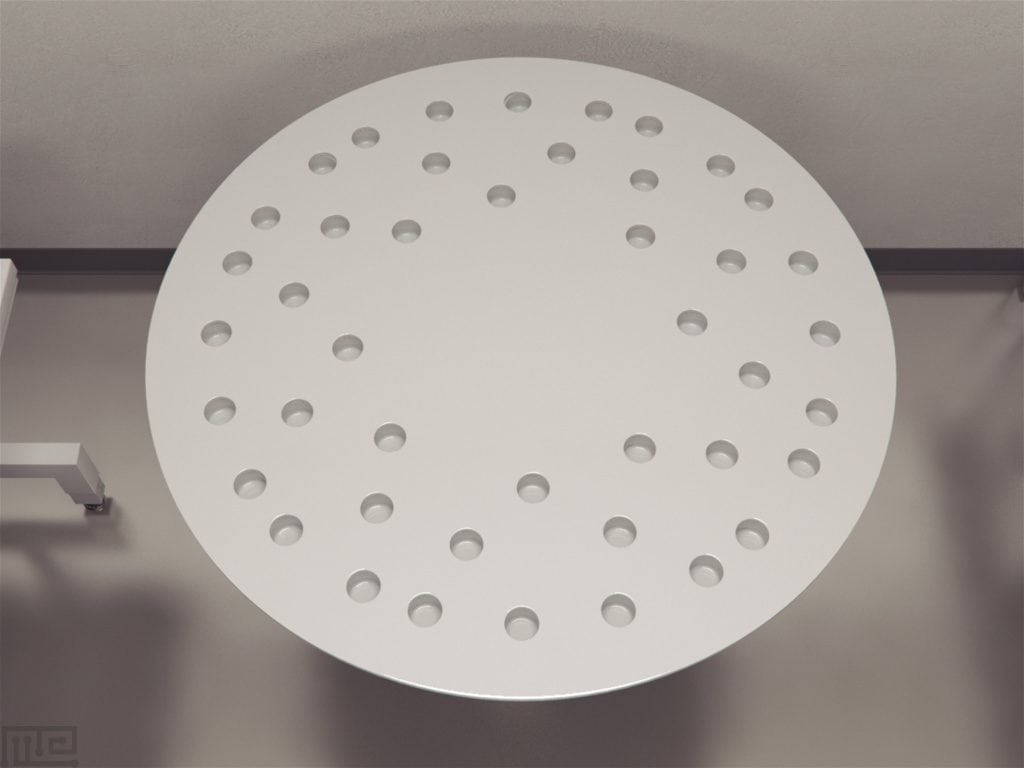 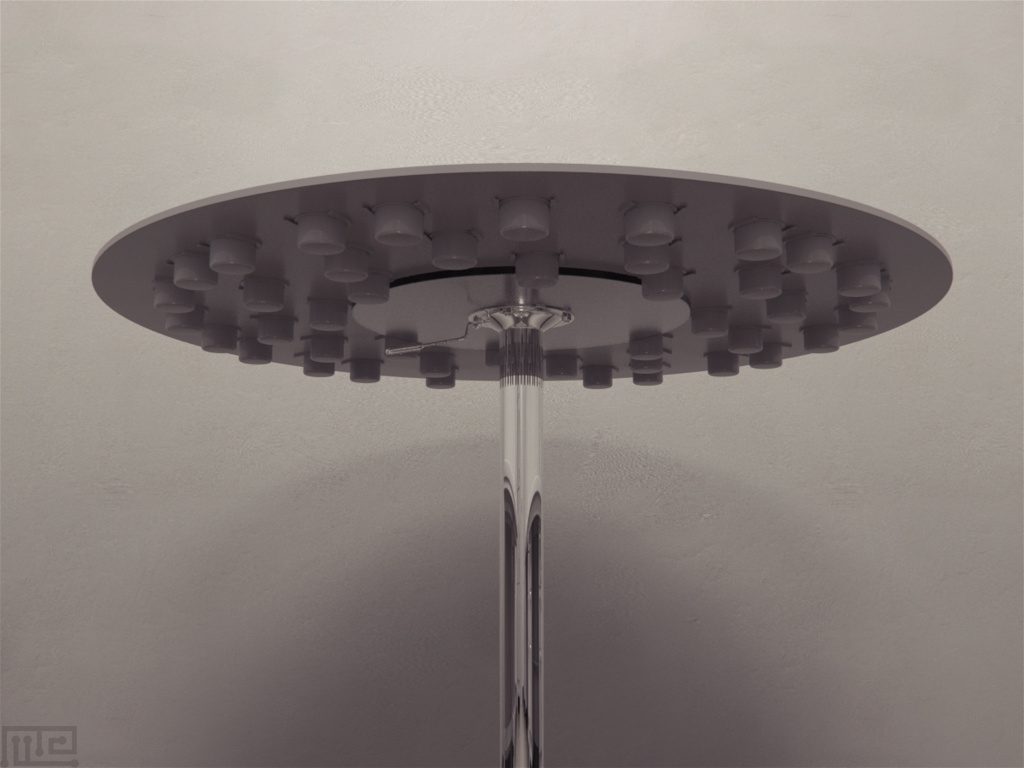 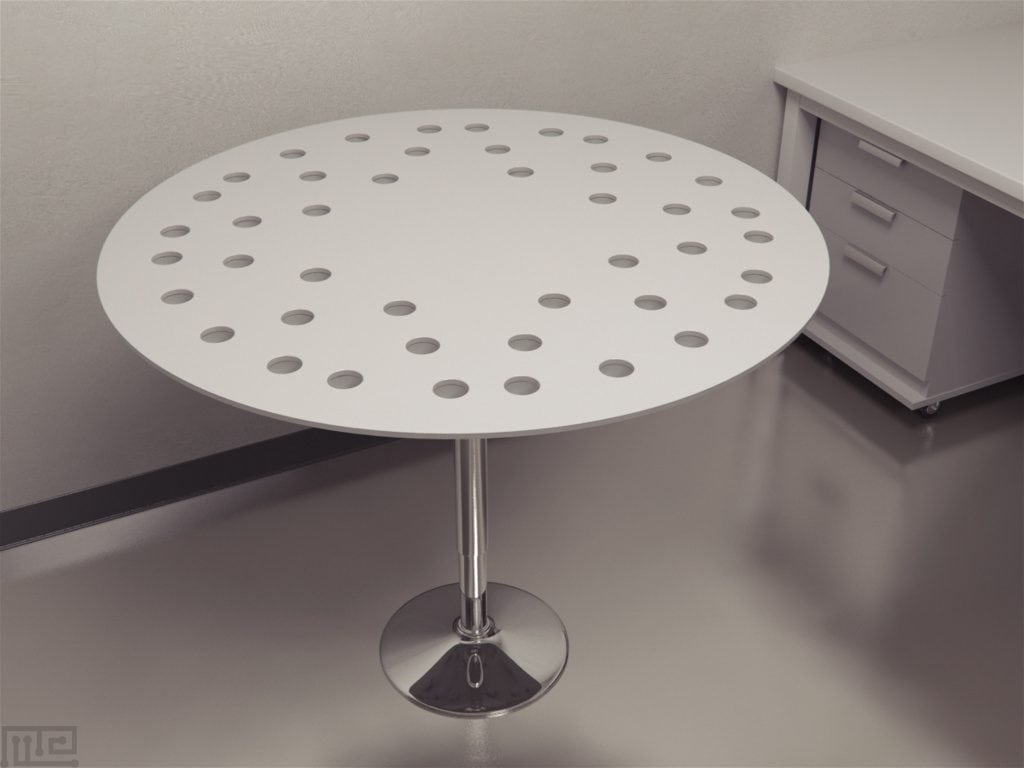 This modification of the Barnes maze was originally described in the literature as a method to increase the task difficulty of the classic Barnes Maze Task. This theoretically leads to a decrease in the serial strategy of goal hole choice.

The increase in the number of holes does not result in poorer performance, but the random arrangement does. (O’leary & Brown, 2012)

Barnes Maze has had success in overcoming the shortcomings associated with stress reinforcing tasks such as the Morris Water Navigation Task and the Radial Arm maze, but as observed by O’Leary and Brown (2011) the apparatus has a significant impact on the tendency of the subject to opt for a serial exploration strategy. Although widely used in spatial learning tasks, the Barnes Maze’s linear arrangement of holes along the perimeter of the apparatus allows the subject to take advantage of serial strategy thereby not truly reflecting spatial learning of the subject.

To rectify this problem, the maze is modified such that the holes are placed in a pseudorandom order to discourage non-spatial strategies. The Modified Barnes Maze has proven to be more accurate in measuring spatial cognition and thus more reliable in the assessment of spatial learning and long-term memory, as compared to the classical Barnes Maze. The apparatus’ pseudorandom arrangement of the holes offers a more cognitively challenging task for the subject while also allowing usage of appetitive and aversive reinforces with same spatial cues.

The Modified Barnes Maze consists of a circular grey platform that has four symmetrical quadrants. Each quadrant contains 2, 3, and 6 holes respectively in the inner, middle and outer ring. The holes contain easily replaceable white double-floored cups underneath. The upper layer of the cup is made of wire gauze that could be used for holding food stimulus or for creating a barrier between the food and the subject by placing the food under it.

The Modified Barnes Maze is constructed using a 122 cm diameter circular light grey platform having four symmetrical quadrants. The 44 holes are divided among the inner, middle and outer ring as 2 holes, 3 holes, and 6 holes respectively. Each hole is equipped with a 5 cm diameter, 3.2 cm deep double-floored white cup which can easily be replaced and washed as needed. The upper layer of the cup is made of wire gauze of depth 1.6 cm. The gauze functions as both a holder and barrier for the food stimuli depending on the usage. The target hole has the dimensions 6.8 x 6.8 x 12 cm and offers a dark secluded shelter for the subject.

The subjects are housed individually at a constant room temperature of 21±1 o C and 60±10% humidity in a reversed 12-hour dark-light cycle. For every experiment, the target is always located in the middle ring of holes, and the location of the target hole is changed between each animal. The platform is also rotated once between every test session. The entire apparatus is cleaned using 70-80% ethanol before and after every test session to minimize olfactory cues. The cups are removed, washed and dried once per day as an additional precaution. The subject is transported in an opaque, dark cylinder from its housing to the apparatus in order to reduce undue anxiety and stress. Observations are recorded using an automated video tracker such as the Noldus Ethovision XT, mounted above the center of the Modified Barnes Maze. To avoid experimenter bias, the subject is said to be using serial strategy if it visits 3 consecutive holes in sequence, and if it spends 70% of its time in the correct target quadrant during the test session, it is said to be using spatial strategy. In case neither of the conditions hold true, the subject is said to be using random strategy. A visit to a hole is defined as a head dip into the hole and error is recorded for every incorrect visit made.

Evaluation of the effect of motivation on cognitive performance. The design of the Modified Barnes Maze allows using appetitive as well as aversive
reinforcers with the same spatial cues. To understand the influence that motivation has on spatial learning and cognition, tests are carried out as aversive and appetite- motivated tasks (Youn et al., 2012). Extra-maze visual cues are placed on the distant walls as a guide to locate target holes.

Aversively motivated Modified Barnes Maze test. To reduce the anxiety of venturing into a novel space, the escape cylinder is filled with nesting material from the home cage. In case the subject fails to locate the
cylinder within 10 minutes, the experimenter gently guides them, and the subject is left in the cylinder for 1 minute. For the second trial and all training sessions, three fans are turned on and placed 60 cm from the maze as an aversive reinforcement. The fans are placed at angles of about 120 o from each other and the rotor heads rotated at 90 o angle in the direction of the maze. The subject is released at the center of the maze using a transport cylinder twice per day. A period of approximately 3 hours is maintained between each trial. If the subject does not locate the target within 3 minutes, the experimenter gently guides the subject towards it.

A probe trial is carried out after the 13 th trial for subjects that make less than 5 errors for two consecutive times. For the probe trial, the escape cylinder is replaced with a white doubled-floor cup identical to the other holes. The probe trial is carried out to investigate if any non-spatial cues enabled the subject to locate the target. The trial is carried out approximately 4 hours after the last trial and follows the same procedure as the acquisition phase. Instead of a timed trial, the duration is limited to 10-hole visits. For subjects that do not meet the criteria even after the 19 th trial, the probe trial is carried out after the 19 th trial. Appetite motivated Modified Barnes Maze test The subjects tend to take more time to consume food rewards in a novel environment even when they are food deprived. To overcome this obstacle, the subjects are subjected to mild food deprivation after 5 days of assimilation. During the shaping period, and throughout the experiment process, the subjects are provided with a food reward, such as almond chips, in their cages to familiarize them with its taste. The body weight of the subjects is reduced to 90% of its original. The shaping sessions last for 10 days, during which the subject is placed in the maze two times per day for a maximum duration of 3 minutes. All the maze holes hold the food rewards with only a few of them allowing access to the reward. After the shaping period, the subjects follow the 2-week recovery period. The habituation and acquisition procedure follows the same process as the aversively motivated test except for the fans. Instead of the fans, food reward is used as appetitive motivation in the target cylinder. To eliminate the bias by odor cues, all holes except for the target hole contained inaccessible food reward under the wire gauze. The probe trial is conducted under the same criteria as the aversively motivated test except that the criterion is considered over 3 consecutive trials. During the probe trial, the target cylinder is replaced with a double-floored cup containing inaccessible food reward. As with the aversive test, subjects that do not meet the condition by the 19th trial are subjected to probe trial after their last training session.

The data is recorded for distance covered to reach the target, the latency in reaching the target location and the speed of the subject. A visit to a hole is determined as a head dip into the hole, and multiple consecutive head dip is recorded as a single visit. An error is recorded for every incorrect hole visit. Strategies used by the subjects were also observed during the trials.

The following chart shows distance covered to reach the target hole in the aversive version of the Modified Barnes Maze test. It was observed that longer latencies were not accompanied by a higher level of exploration as the sessions progressed.

For both reinforcing tasks, a significant effect of trials is observed in latency and distance over the training days.

The Modified Barnes Maze offers the opportunity to assess the influence of different motivations under identical spatial configurations thus providing a balanced approach to understanding the impact of motivation on cognition. The difference in arrangement of the holes as compared to the classical Barnes Maze reduces the dependency of the subject on serial strategy and compels the subject to utilize spatial strategies. The increase in difficulty also impacts the attentional aspect of the process which helps in understanding the long-term memory of the subjects better.

Overtraining and handling procedures may affect reinforcing properties during the task. Ageing and single housing may also impact learning and emotion of the subject and thus impact test results. The subjects own behavioral flexibility can also influence the results.