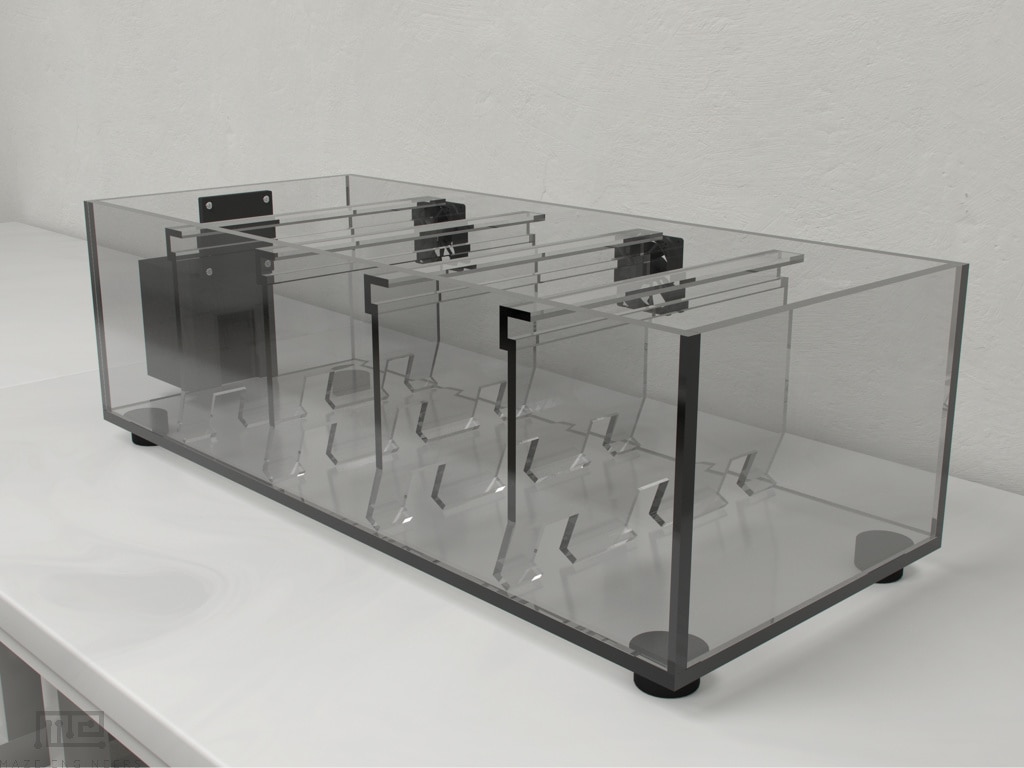 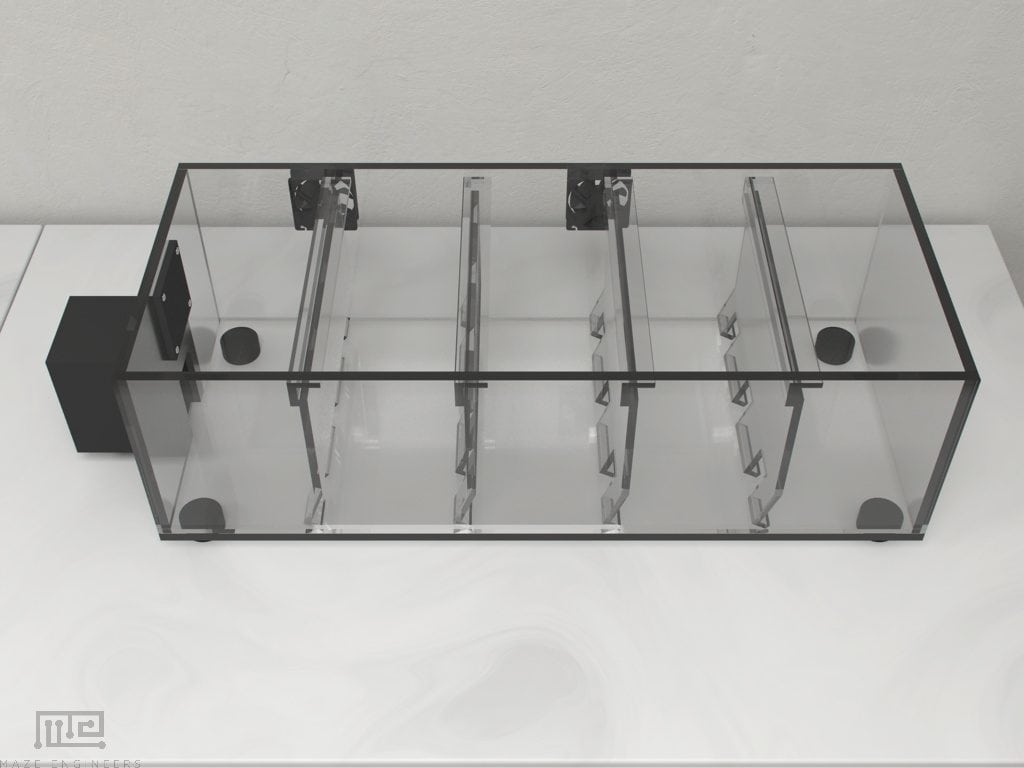 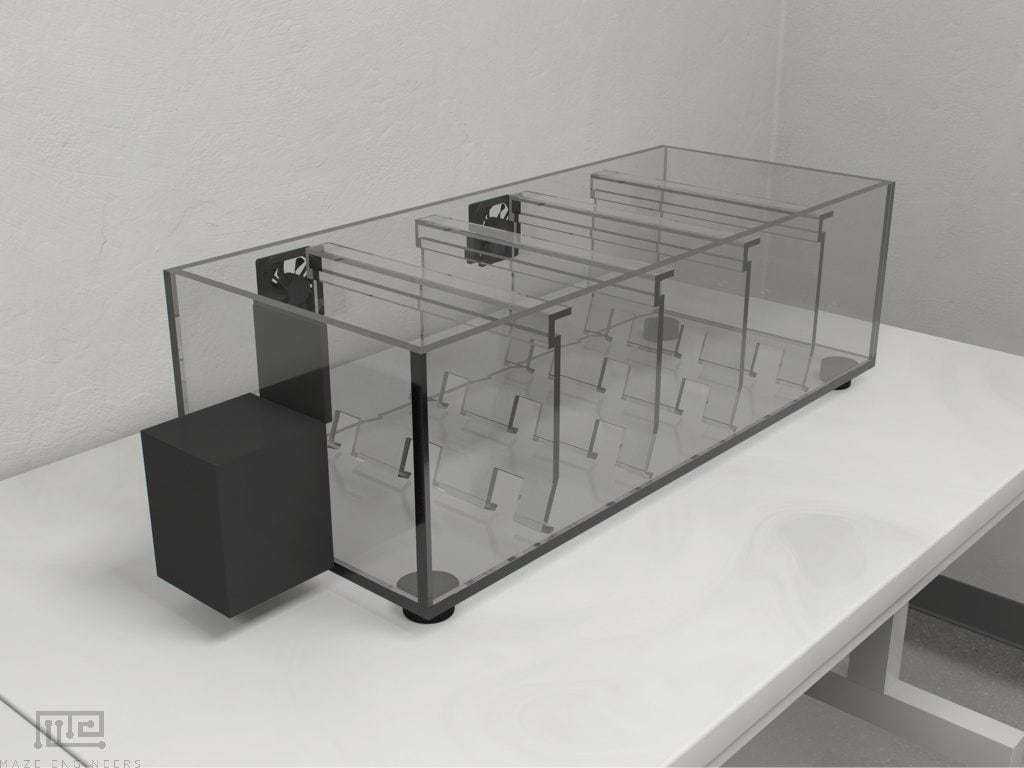 The Repeated Acquisition and Performance Chamber from MazeEngineers (RAPC for short) is an acrylic device with a start and end goal box. The interior main body consists of five compartments with four transparent panels. One way doors separate each of the compartments allow access to successive compartments. Correct entry to the final destination/goal box allows access to a reward determined by the experimenter.

Repeated acquisition and learning chamber (RAPC) is a positively reinforced operant model that is employed to evaluate both learning and rote performance in rodents. RAPC’s assessment of learning (working memory), and performance (reference memory) is not just limited to investigations within the same subject, but within a single behavioral test session as well. This characteristic makes RAPC unique as it can distinguish learning from other factors such as motivation/stimulation, stress, and sensory/motor modulations that usually complicate the measures of learning (Brooks et al. 2000).

In this task, the subjects are introduced into RAPC chamber that is provided with start box and goal box at opposite ends. The chamber is divided into five equidistant compartments separated by four panels. Each panel comprises three one way doors. It is a multiple schedule task. In the learning component, the subjects are required to learn a new sequence of door openings in search for the reward (saccharin). The sequence of doors is rotated during each session. On the contrary, the sequence of doors is kept consistent in the performance component. The learning and performance components are alternated over the entire length of the testing sessions (each component involves 3 sessions, and each session consists of 3 trials), with different auditory stimulation that allows the subjects to distinguish which component is currently in progress.

It is a well-established fact that in numerous models, treatment induced modulations in motor function, sensory processing, and motivational levels can all affect the indicators of learning, especially latencies. The induction of deprivation procedure evokes new potential influences such as stress, and other physiological changes. Furthermore, the utilization of negative reinforcement procedures, while disregarding the need to shape behavior or to impose deprivation procedures, induces new prospective influences, including stress (Jodar et.al 1995; Kaneto et. al 1997) and other physiological modulations.

However, RAPC model strongly relies on motor function, sensory capabilities, and adequate motivation to execute behavior both in learning and performance modules of the session. The learning per se is only necessary for the learning component of the schedule. Consequently, modulations in learning per se should be observed only in the learning component. The extent of influence of motor, sensory, and motivational contributions can be detected with the changes in accuracy in both learning and performance components. This is how RAPC differentiates direct factors that truly shape behaviors from indirect factors that also have the capacity to shape behaviors. (Cohn & Cory-Slechta, 1994; Cory- Slechta, 1994; Thompson et al., 1986). Additionally, the learning domain can be evaluated on a repeated basis, overcoming difficulties associated with other techniques having simplified choice points.

RAPC is the modified version of the three panel runway apparatus developed by Furuya et al. 1988. The three panel runway apparatus is considered as the precursor of the RAPC we use today. Furuya et al. 1988 designed the apparatus to evaluate working memory by utilizing a repeated acquisition procedure. Their apparatus consisted of four consecutive choice points sandwiched between the start and goal box. Each choice point was provided with three panel gates with only one functional at a time, and front stoppers blocked the other two. Once the subject gained access to the next compartment, a rear stopper prohibited the subject from getting back to the start box. 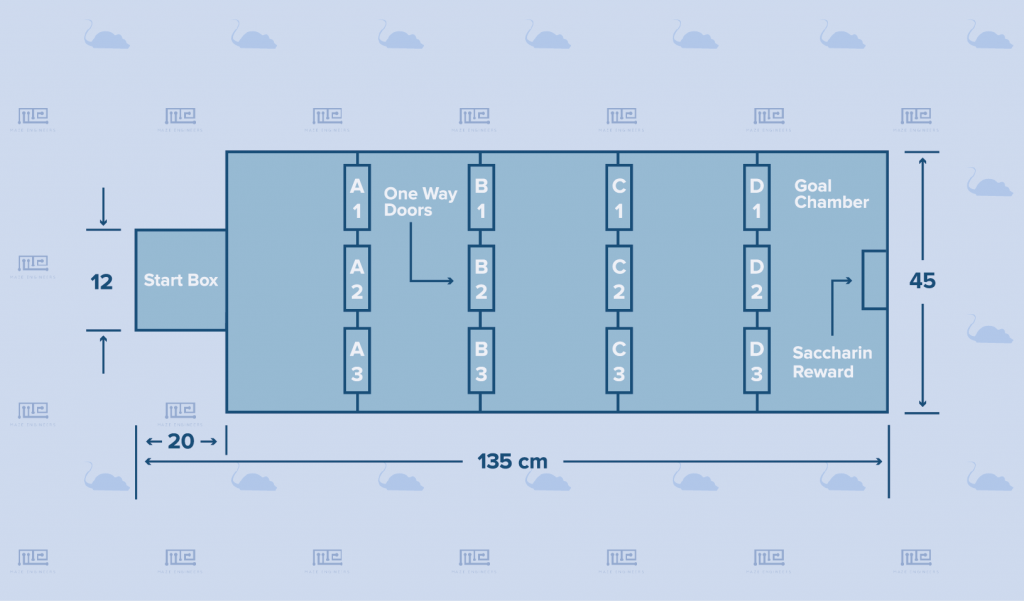 The chamber is segregated into five discrete equidistant compartments with the aid of four clear panels. Each panel is provided with three one way doors that can be opened individually, permitting access to consecutive compartments. The access to the first compartment can be regulated by a guillotine door from the start box.

After the acclimation procedure, the subjects are tested for repeated acquisition (RA) and the performance (P) component. The experimental design consists of three sessions occurring every alternate day with ad libitum water on non-test days. Each session involves three performances each of the RA and P component. In each session, a total of 3 trials should be carried out from the start box to the goal box during each performance of the RA and P component, making it 18 trials per session.

To evaluate the working memory (RA component), the specific door sequence should be changed randomly with each consecutive session according to the cohort. The sequence of doors should not be repeated to ensure a completely different response sequence in the learning component of each session. Simply, there should be no cues as to the current correct sequence.

On the contrary, the sequence of doors should be kept constant throughout sessions for the Performance component. The auditory cues are used to discriminate the RA and P component. During the entire course of the P component, a static audio signal is played whereas the absence of the audio signal is the indicator of the RA component of the test.

Each trial is separated by an interval of 45-60 seconds, so it should be utilized for the cleaning of the apparatus. Latency to enter the goal box is recorded as the time taken by the subject to leave the start box, successfully navigate through the five compartments, and reach the goal box.  Furthermore, the number of door choice errors are also recorded. The data can be recorded automatically through our software Noldus Ethovision XT. The cut-off time to reach the goal box is 10 minutes, and in the event of failure, the subjects are placed into the goal chamber manually.

The RAPC is a unique behavioral paradigm considering it evaluates both spatial learning (repeated acquisition) and rote performance concurrently. Furthermore, the assessment could either be carried out within a subject and within a behavioral test session (Brooks et al. 2000).

Evaluation of the disruption of working memory caused by cholinergic antagonist

Originally named as the three panel runway apparatus—known as RAPC today—has been modified iteratively to reach its final form (Figure 1).  No other known modifications have been described to our knowledge. However, we will continue to monitor the literature.

Memory deficit in rodents can be assessed by considering two parameters.

The sample data shows the impact of hippocampal lesions on memory impairment. The lesioned group spends more time to reach the goal box, which consolidates the disruption of working memory, whereas little fluctuation is seen in reference memory (Figure 2a). 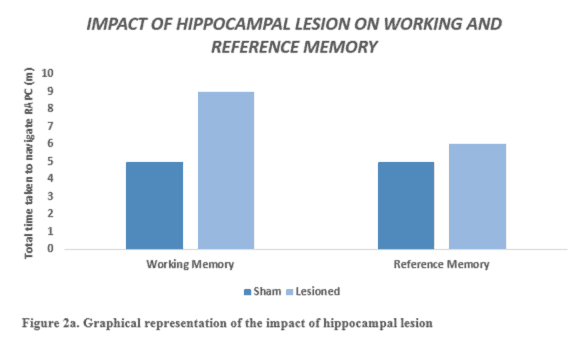 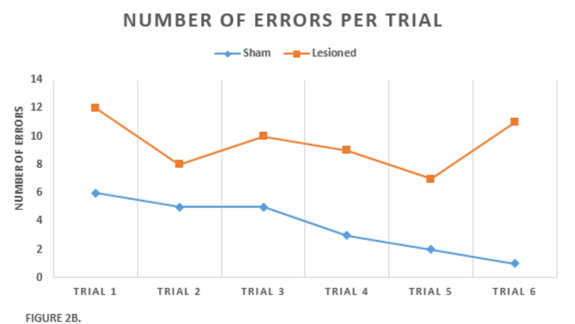 RAPC can reliably detect changes in learning as manifested by the alterations in hippocampal function. The wide range of choice points and the ability to impose new door sequences allow multiple learning set-formation and time-course evaluations in a behavioral context. This characteristic makes RAPC stand out from the other simple approaches and methods.

The RAPC paradigm rules out the involvement of noncognitive factors as it assesses changes both within a subject and within a session. It provides a robust experimental design surpassing both within group assessments and even assessments that require consecutive tests in different behavioral models.

RAPC’s spatially enriched environment achieves stable rates of acquisition at a much quicker rate than other operant chambers. It requires minimal training (few sessions for subjects) to acquire stable responding. Furthermore, the task difficulty can be manipulated to enhance flexibility by adding more choice points (Cohn and Paule 1995).

Spatially oriented apparatuses such as RAPC and radial arm maze are labor intensive and occupy much more space than other operant chambers. Another disadvantage is the time-consuming nature of the RAPC paradigm (Cohn and Paule 1995).

Cohn, J., & Cory-Slechta, D. A. (1994). Assessment of the role of the dopamine systems in lead-induced learning impairments using a repeated acquisition and performance baseline. Neurotoxicology, 15, 913–926.

Cory-Slechta, D. A. (1994). The impact of NMDA receptor antagonists on learning and memory functions. Psychopharmacology Bulletin, 30, 601–612.

M Ohno, T Yamamoto and S Watanabe. (1992). Effects of intrahippocampal injections of N-methyl-D-aspartate receptor antagonists and scopolamine on working and reference memory assessed in rats by a three-panel runway task. Journal of Pharmacology and Experimental Therapeutics; 263 (3) 943-950.

Higashida, A. and Ogawa, N. (1987). Differences in the acquisition process and the effect of scopolamine on radial maze performance in three strains of rats. Pharmacol. Biochem. Behav. 27, 483-489.