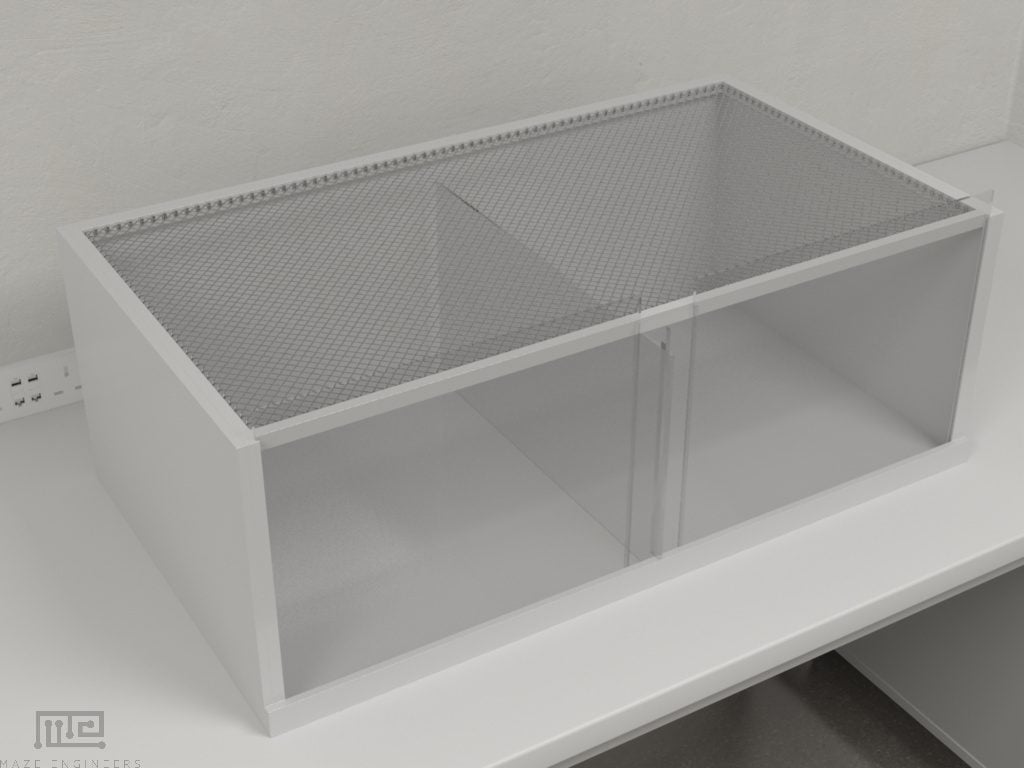 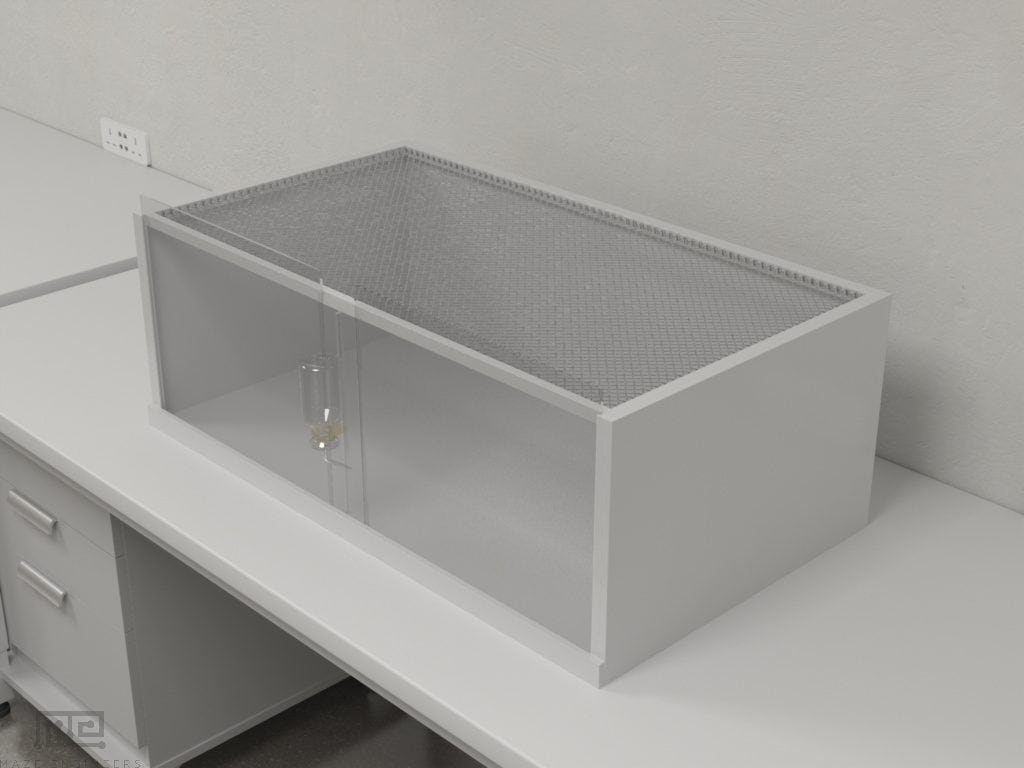 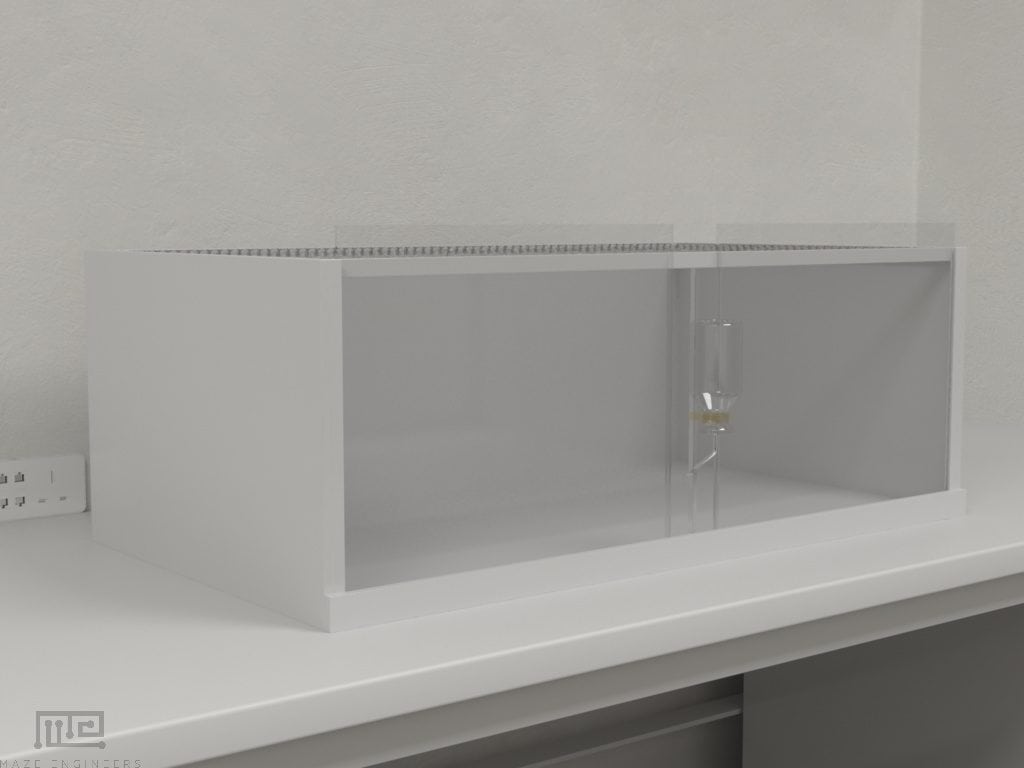 The Resident Intruder test is a chamber used for social defeat paradigms. Composed of a clear front of cage for video recording; opaque sides and back; wire top; lip on bottom to keep in bedding; easy to clean by spraying and wiping with 70% ethanol without losing clarity of front wall.

A sliding panel door in front is used to introduce and retreive rats; it can also be used to separate them if need be. A slot to insert a wire mesh dividing wall between the two halves of the cage. A fixture to allow water bottle and food tubes 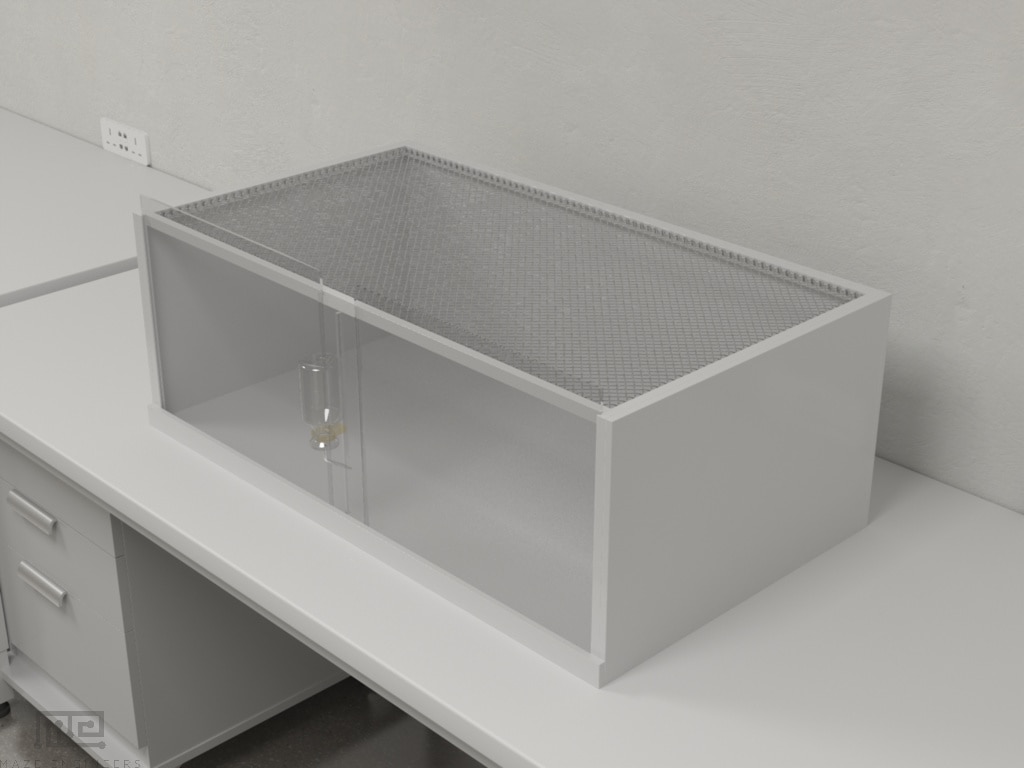 It is a broadly applicable task as it can evaluate aggressive and defensive behaviors, social stress, the involvement of the HPA axis following a social defeat, the effects of pro-aggressive and anti-aggressive drugs. Furthermore, it has also led to the discovery of a novel neurochemical pathway.

This task is usually conducted in a territorial male resident rat or mice confronting an intruder of the same species. In this way, the paradigm is useful in eliciting both offensive and defensive aggression in animals under different influences and situations. Specifically, the paradigm has been useful in psychopharmacological studies on aggression (Olivier and Young, 2001).

The resident-intruder apparatus consists of a chamber assembled from a material that makes sanitizing easy. The lateral sides, back, and the base of the chamber are opaque, and the top is made up of wire mesh. The front door is kept clear for optimal recording through video trackers such as Noldus Ethovision XT. The front door is provided with a sliding window that can be used to introduce and remove subjects.

In the Resident-Intruder test, territoriality is considered imperative. During the pre-testing period, territoriality is simulated in male rodents by the presence of females, sexual experience (Barnett, 1975 and Albert et al., 1988), and olfactory cues. The bedding of the cage is not cleaned to let the resident establish its own territory and the intruder to perceive that it is in the home cage of the resident.

The result of this territoriality is that the resident is likely to attack any unfamiliar males intruding its home cage. This makes it possible to study offensive aggression by using the resident as the experimental animal. One hour before the test, the companion female is removed from the resident cage. After this is done, the testing phase is started.

The optimal time to carry out the testing phase is during the rodents’ peak activity period which is usually the dark phase. At the start of the experiment, an unfamiliar male (intruder) should be introduced into the home cage of the resident. The intruder should be slightly smaller than the resident and should not be used in any experiment with the same resident before. With the aid of a light sensitive video camera such as Noldus Ethovision XT, the behavior of the resident is recorded. In general, when resident males encounter an unfamiliar male intruder in their territory, the bout may result (Miczek, 1979).

Testing can be performed once or twice a day; with each test period running for 10 minutes. However, the experimenter may continue the test for 10 minutes after the first attack.  The level of aggressive behavior usually increases across the first few tests but remains constant after three to four tests. At the end of the test, the intruder male is removed from the cage while the resident male is reunited with its companion female.

The data collected from the recordings can be used to investigate several behaviors through observable parameters, and a detailed quantitative account of offensive (resident) and defensive (intruder) aggression can be obtained (Koolhaas et al., 2013).

For offensive aggressive behavior, the resident male is observed by taking the duration and frequency of parameters such as attack latency (the time between the introduction of the intruder and the first clinch attack), shift towards the intruder, social exploration, anogenital sniffing, rearing, chases, keep down, clinch attack, upright posture, lateral threat, non-social exploration and rest or inactivity.

For behavior depicting violence, the same protocol is followed both for the residents and intruders. Behavioral parameters like attack latency, the ratio between the frequencies of lateral threats and clinches, bites at target sites, and behavior of the intruder in a new environment are observed. A very short latency is the first indicator of violence.

Evaluation of the involvement of HPA axis following social defeat

In this model, the subjects (both aggressive and submissive) usually exhibit increased serum level of corticosterone after each social defeat, which is indicative of the enhanced activity of the HPA (hypothalamic–pituitary–adrenal) axis. (De Miguel et al., 2011)

Evaluation of a novel neurochemical pathway

The resident-intruder task has led to the discovery of a novel neurochemical pathway involved in the regulation of aggression. The neuropeptide vasopressin stimulates the anterior hypothalamus and preoptic area to intensify dominance and aggression behaviors in rodents. Vasopressin receptor antagonists administered into these areas significantly inhibits the aggressive behaviors manifested by decreased aggressive activity in the resident-intruder paradigm. On the other hand, the incorporation of selective serotonin uptake inhibitor decreases offensive aggression and impedes vasopressin-evoked aggression. (Ferris et al. 1997)

The testing apparatus can be slightly modified by a wire mesh that can be placed through a slot to divide the chamber into two discrete sections. Additionally, water bottles and food tubes fittings can also be incorporated. 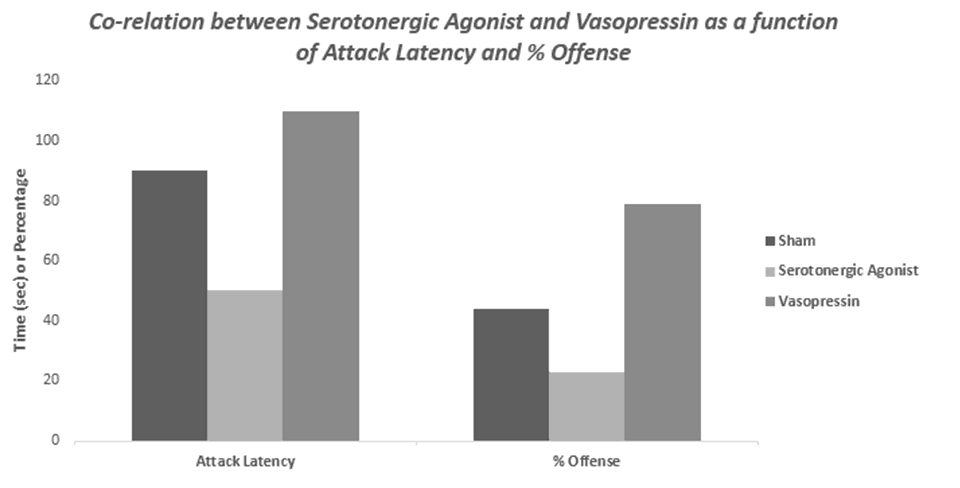 This model is an exceptional choice in screening for potential anti-aggressive drugs such as serenics.

The limitations that come with the use of this paradigm are in the fact that rats are subjected to unhealthy environment as beddings are not cleaned up for a week just to ensure that olfactory cues are not compromised. Also, during the test, some violent resident male may inflict injuries on the intruder.

However, despite these limitations, the resident-intruder paradigm allows robust studies on the causes, pattern and consequences of aggressive behavior. It is a model with a high face and construct validity that covers not only the adaptive biology of social behavior, but can be used to study maladaptive aspects as well in terms of violence and social stress pathology (Koolhaas et al., 2013).

Miczek K A. A new test for aggression in rats without aversive stimulation: differential effects of D-amphetamine and cocaine. Psychopharmacology (Berl) 60:253–259 (1979)