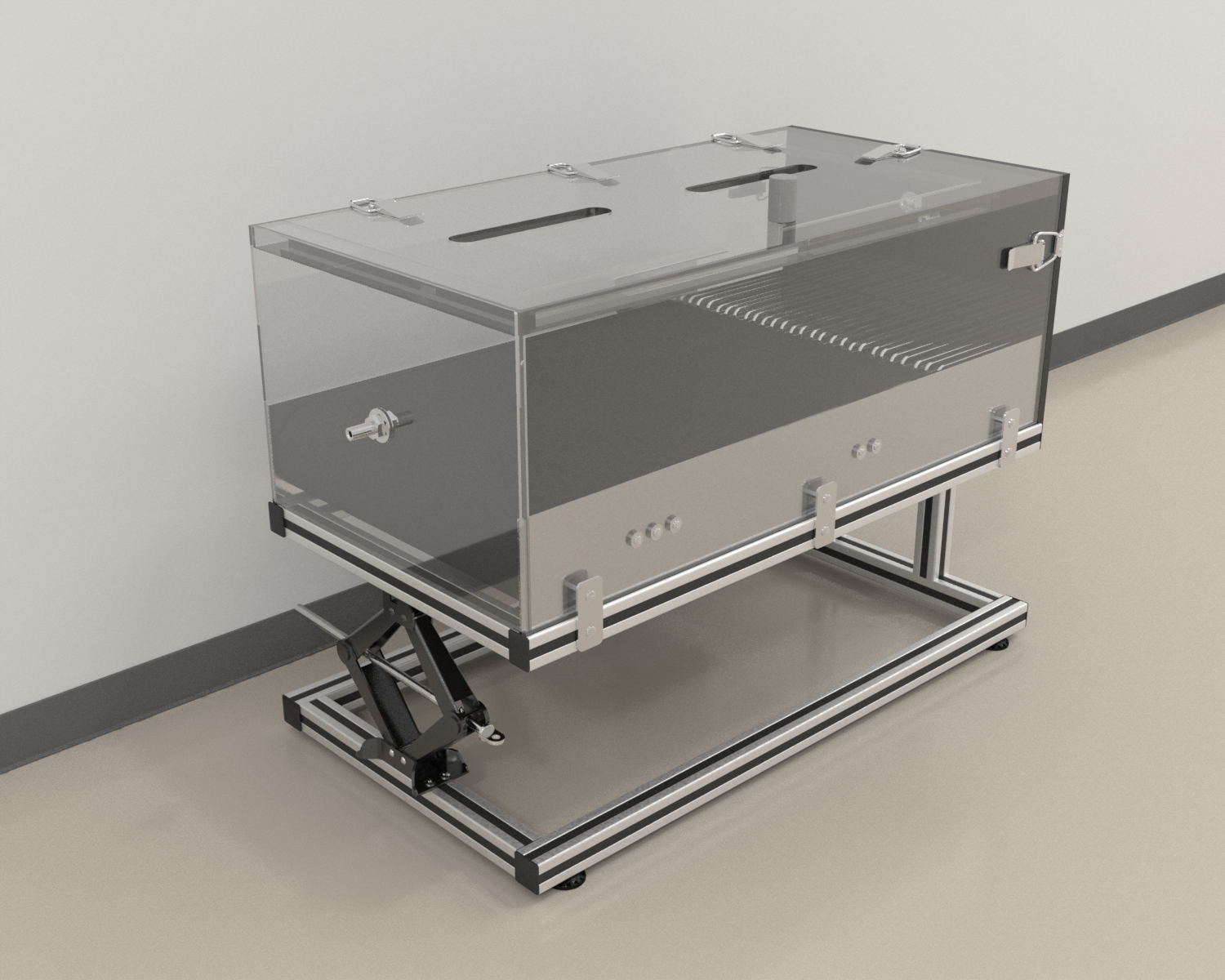 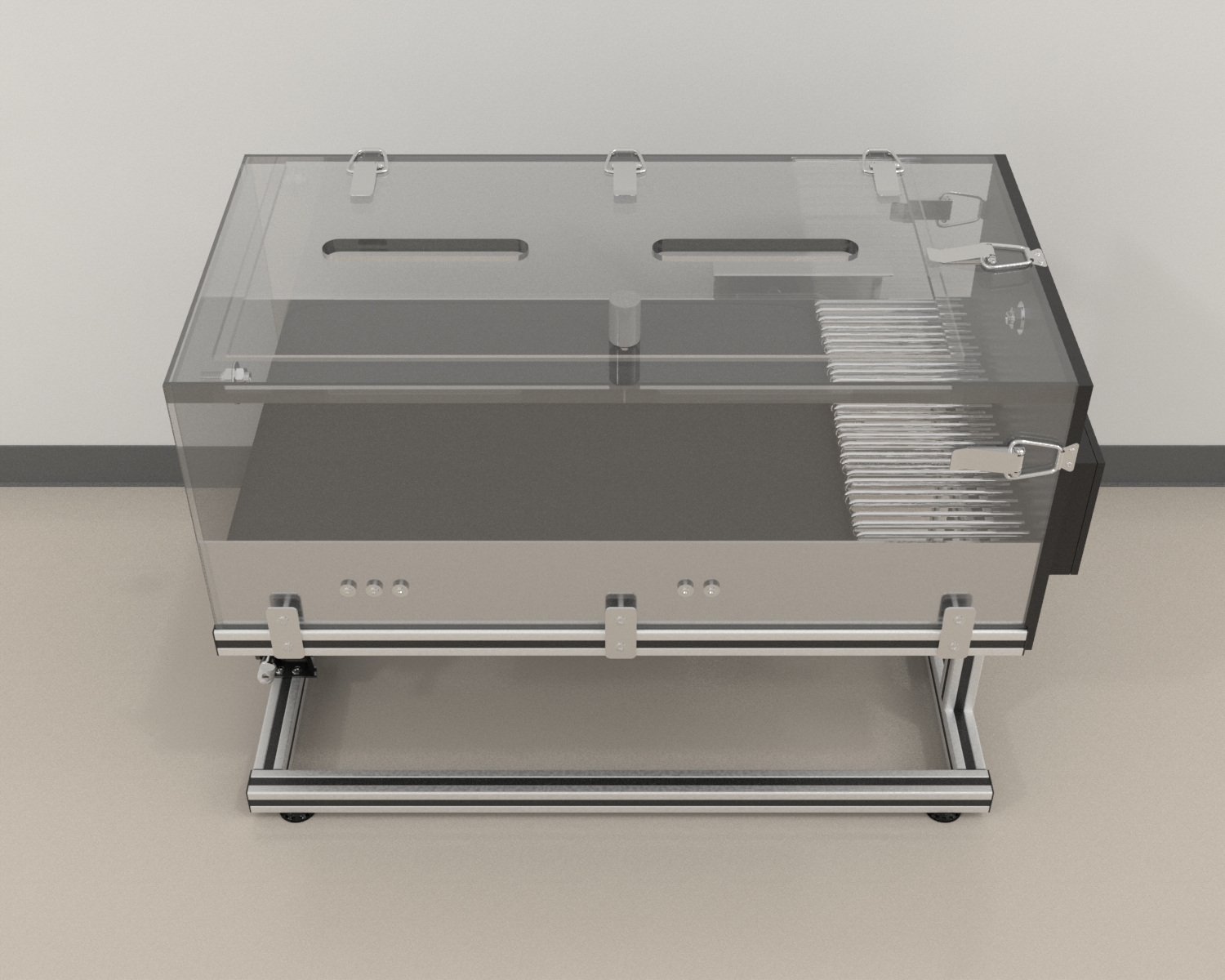 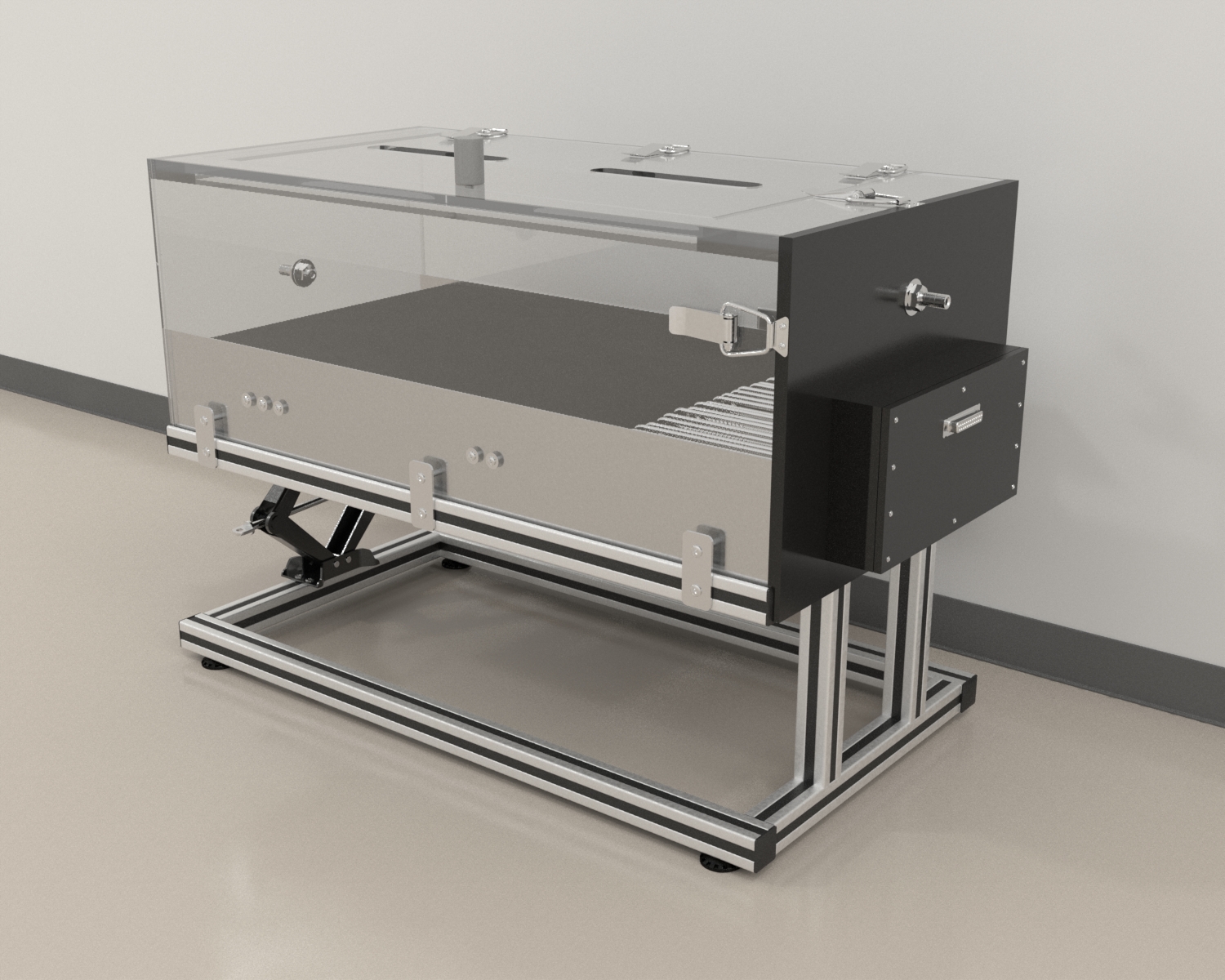 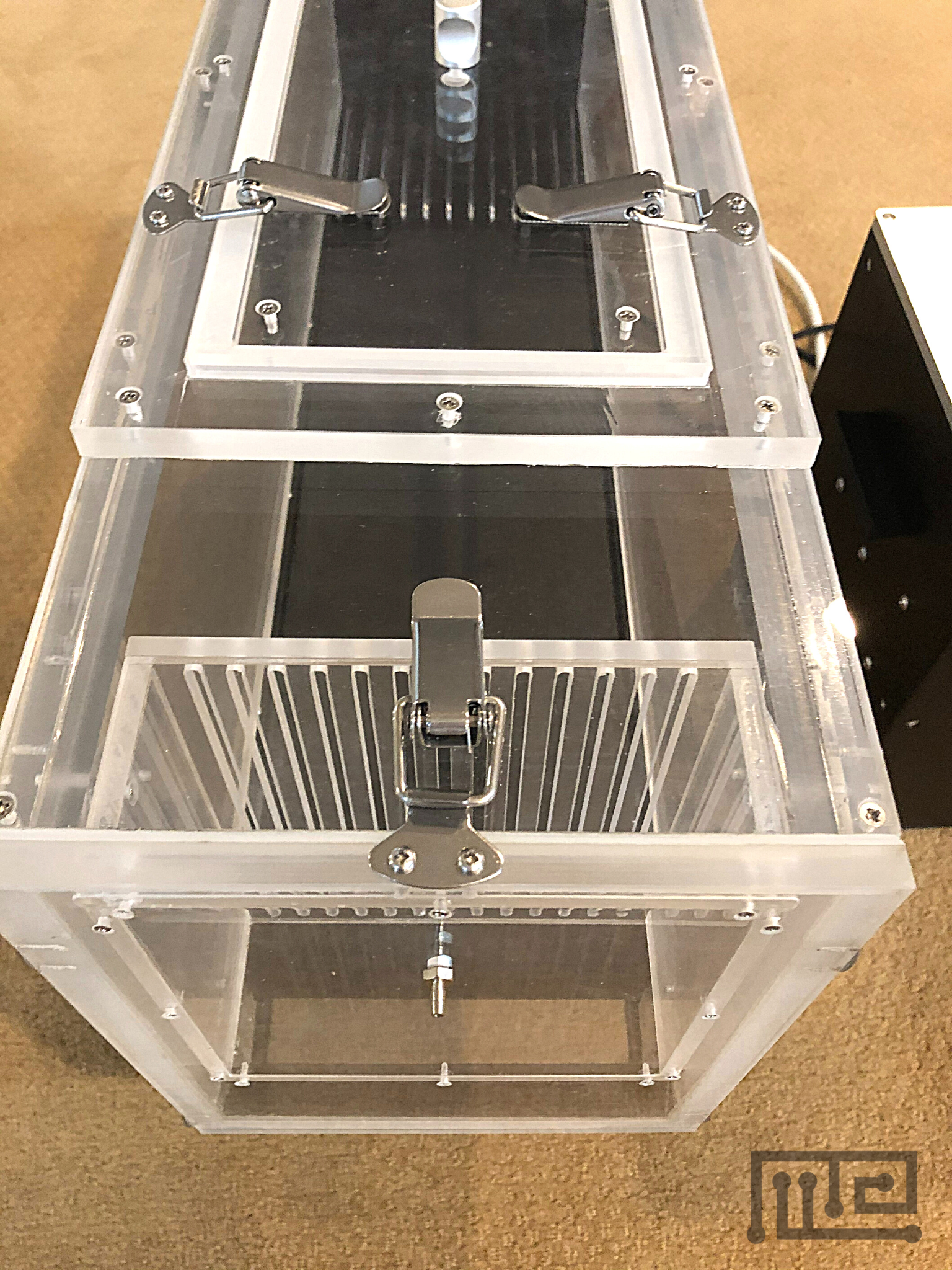 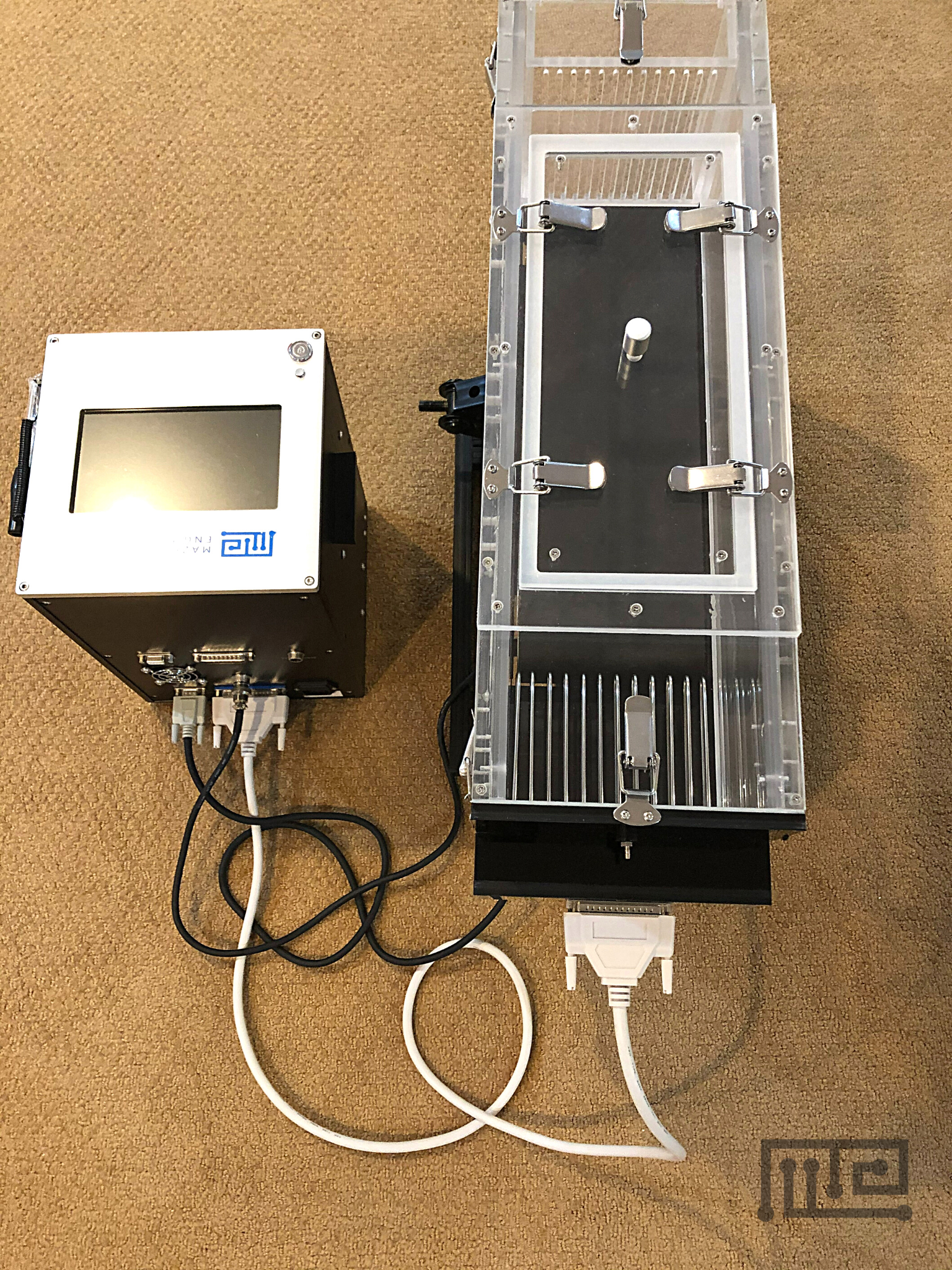 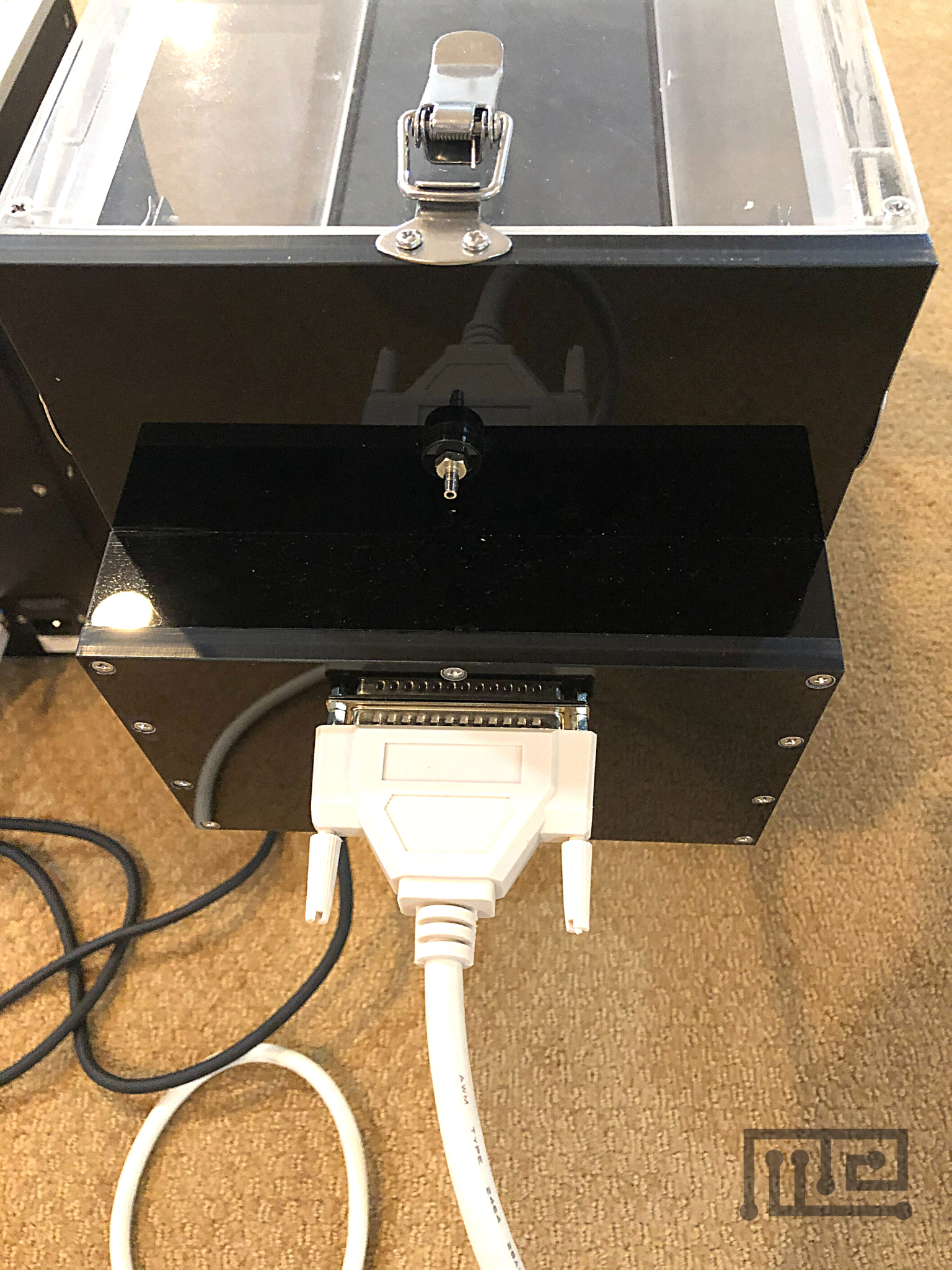 The treadmill is a popular exercise system used to force-train rodents. Our Rodent Metabolic Treadmill is a variation of the Classic Treadmill that comes with multiple features, including Easy sloping, easy-grip belt, low noise, Conductor integration, rich data collection, and an easy-to-protocolize treadmill for activity experiments, with a Metabolism System.

The Rodent Metabolic Treadmill device is a single-lane treadmill designed for metabolic measurement in rodents.

Our  Rodent Metabolic Treadmill device treadmill is constructed using aluminum and acrylic. The runway is made of a textured belt that facilitates animal grip. The speed of the lane can be varied between 0 to 80 meters per minute with acceleration increments of 0.1 meters/minute. The runway incline can be varied between 0 to 25 degrees. The device comes with associated software to control and configure the experiment.

Request a Treadmill Integration with Metabolism

The Rodent Metabolic Treadmill is a single-lane treadmill used for the metabolic measurements of rodents. It consists of a textured running belt enclosed within a chamber constructed of acrylic and aluminum. The chamber also includes a shock grid, which serves as an aversive stimulus to motivate exercise. It is available in two sizes, smaller size for mice and a larger size for rats.

The Rodent Metabolic Treadmill utilizes a forced training model in which rodents are removed from their home cages and forced to run on the treadmill. This allows measurements of the rodents’ speed, distance, and endurance in acute and chronic stress training conditions, which can be used for metabolic and cardiovascular research. Rodents can be tasked to perform moderate or high-intensity training by adjusting the speed, duration, and inclination of the treadmill according to the experiment’s need. The treadmill’s speed can be adjusted between 0 to 80 meters per minute with acceleration increments of 0.1 meters/minute. Moreover, the incline of the runway can be set between 0 to 25 degrees.

The Rodent Metabolic Treadmill can be used as a model to assess exercise behaviors in humans, including activity level, VO2max, and exercise endurance. These parameters can be used to examine regulatory processes associated with exercise. Studies have utilized rodent treadmill running to assess cardiomyopathy, in which treadmill running improved oxidative parameters in rodents with cardiomyopathy (Kim & Hwang, 2015). Moreover, the effects of treadmill exercise were also investigated in studies to assess oxidative damage in the hippocampus, in which facilitated cognitive improvement (Cechetti et al., 2012) and reduced depression-like behaviors (Wu et al., 2019)

The Rodent Metabolic Treadmill has clear, removable acrylic maze walls and an aluminum frame. It is available in two sizes.

Both versions have independent lane control, adjustable speed between 1-100 meter/minute, speed step of 1 meter/minute, adjustable acceleration in 0.1 meter/minute increments, slope degree of ±35°, and adjustable current stimulus between 0.005 – 4 mA/. They also include a clear capacitative touch screen with a clear display and intuitive interface.

Clean the treadmill with 70% ethanol solution, and wipe and air dry it before every session.

The following is a sample protocol to assess exercise endurance in rodents:

The following is a sample protocol to examine the effects of exercise on a high-fat diet using the Rodent Metabolic Treadmill:

Divide the subjects into runner and sedentary groups and feed both groups a high-fat diet.

Subject the runner group to 30 minutes of treadmill running at a speed of 5 m/min and an inclination of 10% for 30 minutes a day, five times a week for 26 weeks. Subject the sedentary group to running only during exercise exhaustion tests. Conduct exhaustion tests with the treadmill inclined 25% uphill. Place the subject on the treadmill and allow it to run for 14 m/min for 6 minutes. Increase the speed by 2 m/min every 2 min until the subject is exhausted, characterized by the inability to return to running within 10 seconds after contact with the shock grid. Conduct exhaustion tests only at weeks 0 and 25 of the study.

Yi et al. (2012) investigated the effect of treadmill running on high-fat diet-induced hypothalamic inflammation. Male low-density lipoprotein receptor-deficient (ldlr−/−) mice were required to run on the Rodent Metabolic Treadmill over 3 days and then performed an exercise exhaustion test. The mice were then divided into two groups and fed a high-fat diet. The first group, comprising the runner group, was required to run on the treadmill for 30 minutes during the first 4 hours of the circadian’s cycle dark phase five times a week for 26 weeks. The treadmill was put on an inclination of 10% and a speed of 5 m/min. On the other hand, the second group, comprising the sedentary group, was not subjected to treadmill running except during exhaustion tests. Exhaustion tests were performed on weeks 0 and 25 of the experiment. During the test, the treadmill’s inclination was set at 25%, and the warm-up speed was 14 m/min for 6 minutes, after which the speed increased by 2 m/min every 2 minutes until the subjects were exhausted. The subjects running time and distance were calculated. Results indicated that the runner group had a significant decrease in hypothalamic inflammation compared to the sedentary group. Therefore, the results suggested that exercise can reverse hypothalamic inflammation.

The Rodent Metabolic Treadmill is used as a force-training model of exercise, which is used to analyze rodents’ endurance. It is equipped with a running belt that is textured, which helps facilitate the rodent’s grip while running. In addition, parameters such as speed, inclination, and running duration can be set on the treadmill according to experimental needs. The speed can be adjusted between 1-100 meters/minute with adjustable acceleration in 0.1 meter/minute increments, and the incline of the runway can be set between 0 to 25 degrees. The treadmill chamber also includes a shock grid as an aversive stimulus to motivate the rodents to run. The shock grid’s current can also be adjusted between 0.005 – 4 mA/. The Rodent Metabolic Treadmill can be used in studies that investigate the effect of exercise on various components, including oxidative stress, diet, anxiety, and sleep deprivation. The treadmill is available in two sizes, allowing experimenters to choose a model that fits the rodent they’re studying.

In studies involving pregnant rodents, the shock grid should not be used since it may be too aversive. Instead, tail touching should be used to motivate pregnant rodents to run. The same rodent strain and age should be utilized for reproducible studies since it can affect experimental results. Moreover, differences in the running speed, inclination/declination of the treadmill, and duration of running between experiments can also affect results. Therefore, all parameters should be considered closely to create a consistent animal model using the Rodent Metabolic Treadmill.