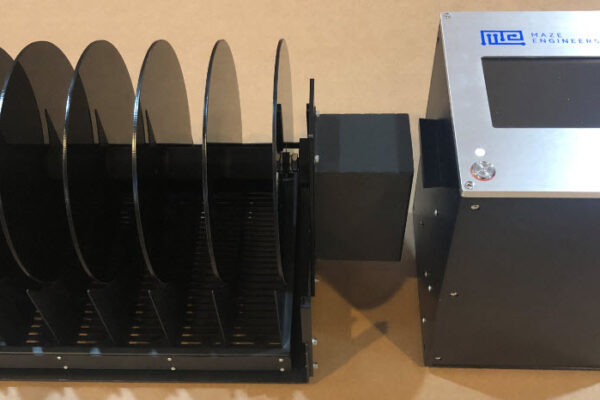 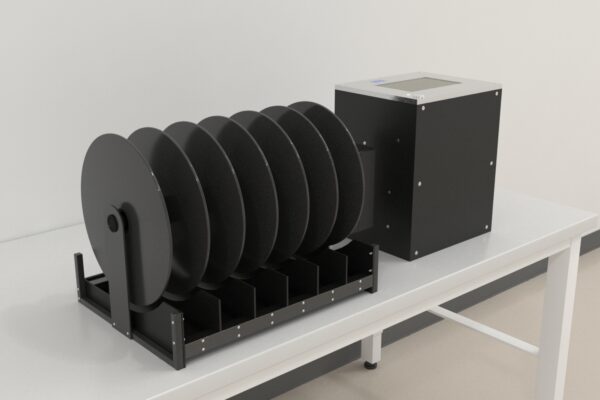 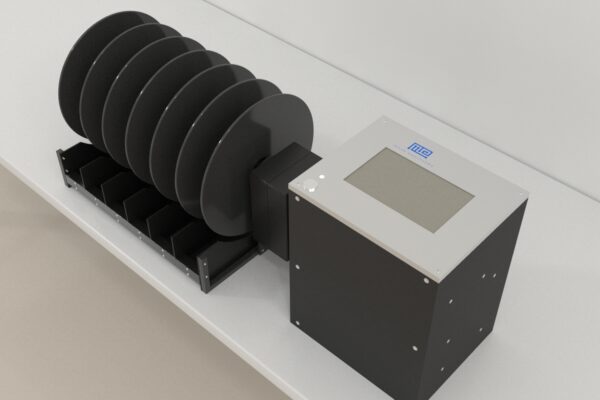 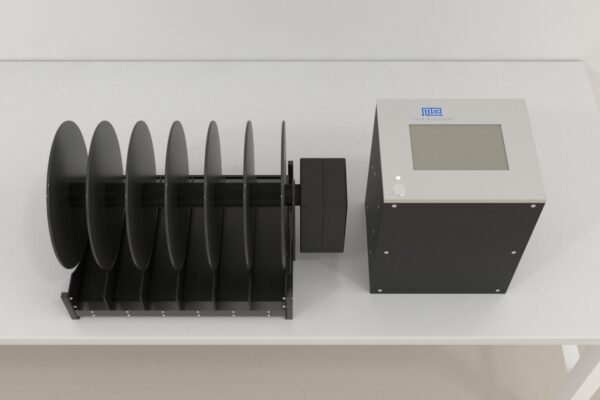 The Rotarod is a widely used behavioral task to assess motor performance in rodents using the natural fear of falling as motivation. The MazeEngineers device and can be customized for speed, acceleration, and is connected and controlled using the easy to integrate Conductor Software (Free with the order).

Dividers prevent mice from entering other lanes. Minimal height & soft landing prevents harm after a fall from the bar. The rod itself has horizontal ridges to help the mouse hold onto the rod.

The Rotarod is a widely used behavioral task to assess motor performance in rodents. Motor performance can be regarded as an index of neurological deficits (Hamm et al 1994). The Rotarod test is based on the fact that many neurological conditions can potentially affect functional motor parameters such as balance, motor coordination, or motor learning ability (Crawley 1999), having a direct influence on the animals’ capacity to remain on the rod. The Rotarod test measures the time an animal can remain walking on a rod rotating at an accelerating speed, thereby allowing the assessment of motor deficits induced by a disease model or intervention. Deficits in motor function are a common consequence of traumatic brain injury, for example. The Rotarod is therefore frequently used as an index of injury-induced motor deficits (Curzon et al 2009).

The rotating rod creates forced motor activity that allows the measurement of disturbances in motor function that would not be evident in a freely-walking or sedentary animal. The Rotarod can also be used as a screening test for the effects or side-effects of drugs on motor function (Cartmell et al 1991, Kirschbaum et al 2009).

The test apparatus consists of a rotating rod of a fixed diameter that increases in speed over a predetermined period of time. As the speed increases, the mouse is required to walk faster to maintain its position on the rod. The latency to fall off the rotating rod or the speed at which the rodent falls off the rod can be recorded and taken as a measure of motor performance.

The Rotarod test was originally developed by Dunham and Miya in 1957 to measure the effect of drugs on the motor coordination of rodents, at the time being named the “rolling roller” (Dunham and Miya, 1957). Since then, several versions of the test have been described. The original version had a set constant speed; Jones and Roberts (1968) increased the sensitivity of the task by gradually increasing the rotation speed of the rod while the animal walks on it.

The Rotarod test has been used to study many disease models, including Parkinson’s disease, Huntington’s disease, or traumatic brain injury, as well as gene knockout and transgenic mice.

The Rotarod apparatus consists of a central drive rod connected to a stepper motor. The rod is located at a height that discourages animals from jumping off it. The rod is a bar covered with a non-slippery surface containing a series of parallel longitudinal ridges, which enable the rodents to grasp it. The length and diameter of the rod will depend on the rodent species to be tested. The rod is divided into compartments by plastic walls, allowing the simultaneous testing of the corresponding number of animals. The base of the apparatus contains a soft padded surface to cushion the animals’ fall.

The motor is attached to a speed selector box. The speed at which the rod rotates can be fixed, or it can be accelerated at a predetermined rate, depending on the purpose of the test.

A timer that begins automatically when the motor is switched on and stops when the animal falls down to the floor of the apparatus, as detected by interruption of an infrared beam, is included.

The purpose of the Rotarod test is to evaluate motor performance in rodents in a control vs. disease model/intervention group, by assessing their capacity to remain on a rotating rod.

There are several versions of protocols to be used with the Rotarod, varying mainly in the rotation speed, the acceleration rate, and testing time.

Pre-training for the Rotarod

Animals should be habituated to the equipment to minimize anxiety and exploratory behaviors that may lead them to inadvertently fall off the rod.

During the week prior to the beginning of the experiment, a daily 30 min training trial should be performed. During the trial, animals are placed on the rotating rod; if an animal falls off the rod, it must be immediately placed back on the rod.

When testing injured animals, wait at least 24 hours following the surgical procedure to allow total recovery from the influence of anesthetic drugs.

Set the apparatus to accelerate as intended (e.g. initial speed of 4 rpm, acceleration rate of 20 rpm/min, until a maximum speed of 40 rpm; Deacon, 2013).

The mean latency or the mean rotation speed determined from the three trials will be the final result. Both can be taken as a measure of motor function and used in subsequent analyses.

Clean and sterilize the equipment between each animal tested.

In the original version of the Rotarod test, as described by Dunham and Miya in 1957, mice would walk on a rod rotating at a constant speed. The most significant modification was introduced in 1968 by Jones and Roberts, who introduced a gradual acceleration of the rotation speed of the rod while the animal walks on it, increasing the sensitivity of the task for motor coordination assessment.

Modifications to the rod itself have also been made. Enclosing the core of the rod with a series of stainless steel bars requires the animals to grip the bars while walking. Since grip strength may be decreased following brain injury, this modification may increase the sensitivity of the test for animal models of traumatic brain injury (Hamm, et al 1994).

The Rotarod has also been modified to test motor skill learning. In this case, the rod had a hard surface, on which it is harder for naive mice to stay; but using a wider rod and a constant low speed leaves room for mice to learn how to walk on that surface – with each training session, mice are able to stay longer on the Rotarod. Recording the latency to fall during a few consecutive days allows the determination of the motor skill learning curve (Shiotsuki et al 2010).

The Rotarod has also been used as a motor-skill training task to assess the structural plasticity of the brain (Scholz et al 2015).

Some versions of the testing apparatus have also included an electric grid at its base that delivers a low current shock to animals that fall from the rod, acting as a conditioning stimulus to discourage animals from jumping off the rod. 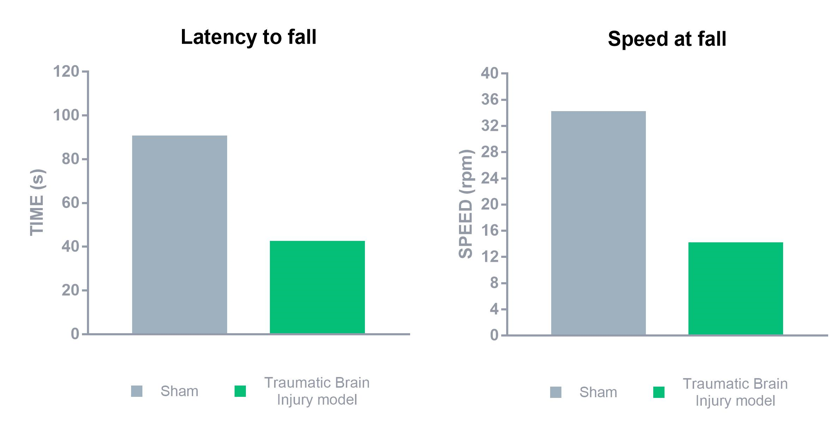 Using graphs similar to these to compare the time spent in the Rotarod or the speed at which the animals fall allows for easy visualization of an effect on motor performance. Animals with traumatic brain injury should spend less time in the rod and fall at a slower speed.

The Rotarod test allows the detection of injury-induced motor impairments at a lower level of injury than other motor performance tests, such as the beam-balance or beam-walking tests (Hamm et al 1994).

The Rotarod test is a sensitive test that allows the assessment of the effect of pharmacological interventions (Cartmell et al 1991).

By being more sensitive than other tests, fewer animals may be required in the Rotarod test to detect motor impairment induced by a disease model or intervention.

Juvenile and older animals may perform poorly at this task (Curzon et al 2009).

The latency of rodents to fall from the accelerating Rotarod can differ substantially between laboratories. These differences arise from the use of different rod diameters and surface textures, different protocols, or uncalibrated acceleration rates, for example (Bohlen et al 2009).