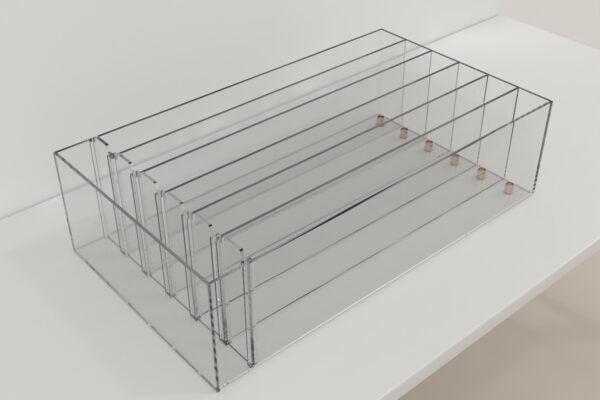 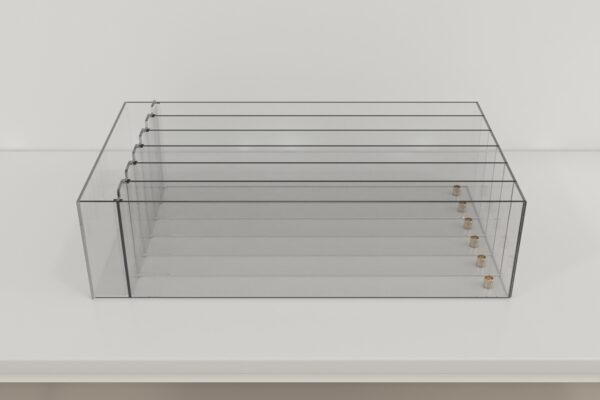 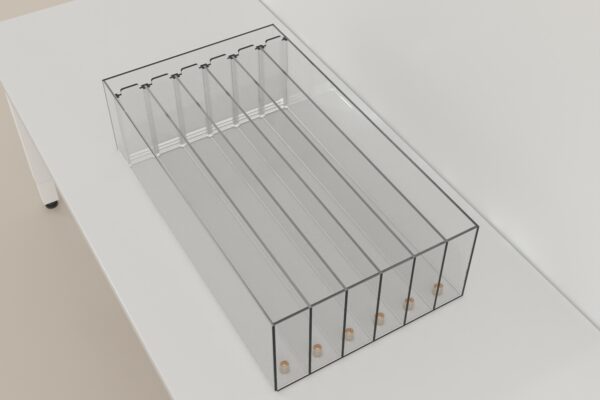 The Six Arm Maze is used to study spatial learning and memory in rodents.

Subjects are tested for their ability to memorize a sequential path in the apparatus. Unlike other apparatus, the Six Arm Maze tasks use food rewards as motivation for exploration, which reduces the effects of stress on the performance.

The Six Arm Maze is used to study spatial learning and memory in rodents. The maze consists of geometrically similar, but visually distinct multiple U-shaped sequential arms connected to a linear track. In general, the subjects are tested for their ability to memorize a sequential path in the apparatus. Unlike other apparatus, the Six Arm Maze tasks use food rewards as motivation for exploration, which reduces the effects of stress on the performance. Additionally, the maze can also be easily utilized for understanding the neural mechanisms underlying path integration and navigation strategies.

The maze can also be applied in research concerning learning and memory deficits associated with traumatic brain injury and neurodegenerative diseases and disorder. The Six Arm Maze’s simple yet complex design makes it suitable for evaluating the effects of pharmacological manipulation and other treatments on the subject’s problem-solving ability. Subjects with impaired learning or memory, present difficulty in memorizing the path sequence and/or associating rewards with the arms. The maze also provides the opportunity to evaluate retention memory with the use of guillotine doors to introduce delays within the task. The doors can also be used to introduce novel arms into the path sequence.

Additional visual cues or auditory cues can be added to the maze arena to adapt it for different memory testing tasks and investigations such as odor test, anxiety, and food handling behavior in rodents. Other apparatuses used to evaluate the spatial pattern learning and memory in rodents includes the Radial Arm Maze, the Six Alley Maze, and the Hair Pin Maze.

The Six Arm Maze is a transparent multi U-shaped apparatus made up of acrylic material. The maze consists of a geometrically similar, visually distinct six arms, sequentially protruding from a 50 cm long hollow linear track. The sequence arms are 7.25 cm wide and are equipped with circular food wells of 2 cm width and 2 cm depth. A 24 cm tall vertical transparent wall of 0.6 cm thickness and 81 cm length separates each of the sequential arms from one another. The maze can be equipped with guillotine doors to control the animal’s movements.

Ensure that the maze arena is thoroughly cleaned before trials to avoid interference from any additional stimuli on maze performance. For automated tracking and recording of the subject’s behavior and locomotor activity, a video tracking system such as the Noldus EthoVision XT can be used.

For the purpose of recording, name the sequential tracks A to F from left to right. Animals may need to be food deprived to increase their motivation to find food rewards.

Train the subjects to explore a linear track with rewarded food wells at either end. Following this, place the subject in one of the sequential arms of the apparatus that will act as the start arm (for example arm C) of the predetermined cyclic sequence. Train the subject to follow the predetermined sequence (for example, C-D-C-B-C cyclic sequence) using food rewards in the food wells. Guillotine doors may be used to block access to non-sequence arms. Pretraining on the sequential arms is investigation dependent.

Place the subject in the start arm of the predetermined cyclic sequence that is to be rewarded and allow it to explore the maze. Reward the subject with a food reward when it visits the start arm from any of the other arms (inbound trajectories) and when it visits the arm adjacent the start arm following the cyclic sequence (outbound alternation). Do not reward consecutive repeated visits to the same food well. Perform the task in sessions of 20 to 30 minutes with adequate rest sessions in between until the subject meets the learning criterion.

Once the subject meets the learning criterion, begin with the sequence switching task. Begin the first session by first baiting the rewarded food wells for the previously learned sequence (S1) followed by a second session with a new rewarded sequence (S2). Repeat sessions as required, alternating between the two sequences within each day.

Singer, Karlsson, Nathe, Carr, and Frank (2010) evaluated the role of experience and learning in invoking coordinated hippocampal place-cell activity in rodents. Three male long-Evans rats initially food-deprived to 85-90% baseline weight were individually evaluated on the Six Arm Maze and Three Arm Maze. Following the pertaining sessions, animals underwent surgery and received independently moveable tetrodes to record neural firings during the task. In the sequence switching task of the Six Arm Maze, it was observed that the subjects used a placed-centered strategy instead of a body-centered strategy. Initially, when placed in the start arm of the second rewarded sequence, the subjects immediately followed through with the path sequence of the first rewarded sequence. Eventually, as the trials progressed, the subjects performed the second rewarded sequence with greater accuracy. Observation of cell firing revealed that despite being at different locations on the track, cells fired at the same spatial separation. Additionally, path-equivalent coding was observed in half of the cells with place fields, which was observed to increase with experience. However, path equivalence was observed to be less common in the Three-Arm Maze.

Singer and, Frank (2009) assessed the interaction between hippocampal sharp-wave ripples (SWRs) and rewards using a sequence switching task in the Six Arm Maze. Three male Long-Evan rats, food-deprived of 85-95% of the baseline weight, were implanted with 16 portable tetrodes targeting hippocampal CA3 principal cells. Following the treatment, subjects were observed for their response to changing reward contingencies using two sequence paths, S1 and S2, in the maze. It was observed that the rewarded trials had more SWRs at the food wells per unit time as opposed to the unrewarded trials. Additionally, these SWRs also resulted in the increased likelihood of activation of the place cells in the rewarded trials. Further analysis during exposure to S2 sequence showcased enhancement of reward-related SWR activity when subjects are tasked with new path-reward associations. The neural analysis also revealed that the SWR activity reactivated path experience related elements based on receipt of reward.

The following parameters can be observed in Six Arm Maze,

The Six Arm Maze’s interconnected alleyways provide a unique environment to test learning and memory in rodents. Unlike other tasks that rely on aversive stimulus as motivation, the Six Arm Maze uses appetitive motivation, which is less stressful. Thus, minimizing the effects of stress on task performances. The maze can also be easily adapted for different protocols using guillotine doors to limit path choices and introduce delays.