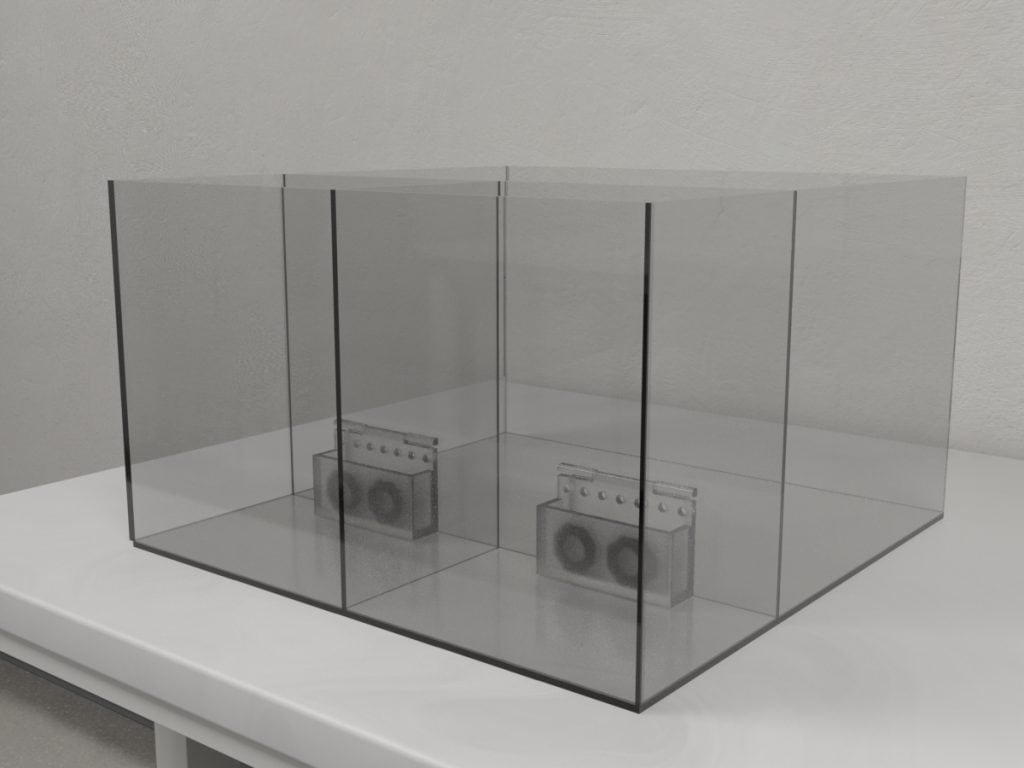 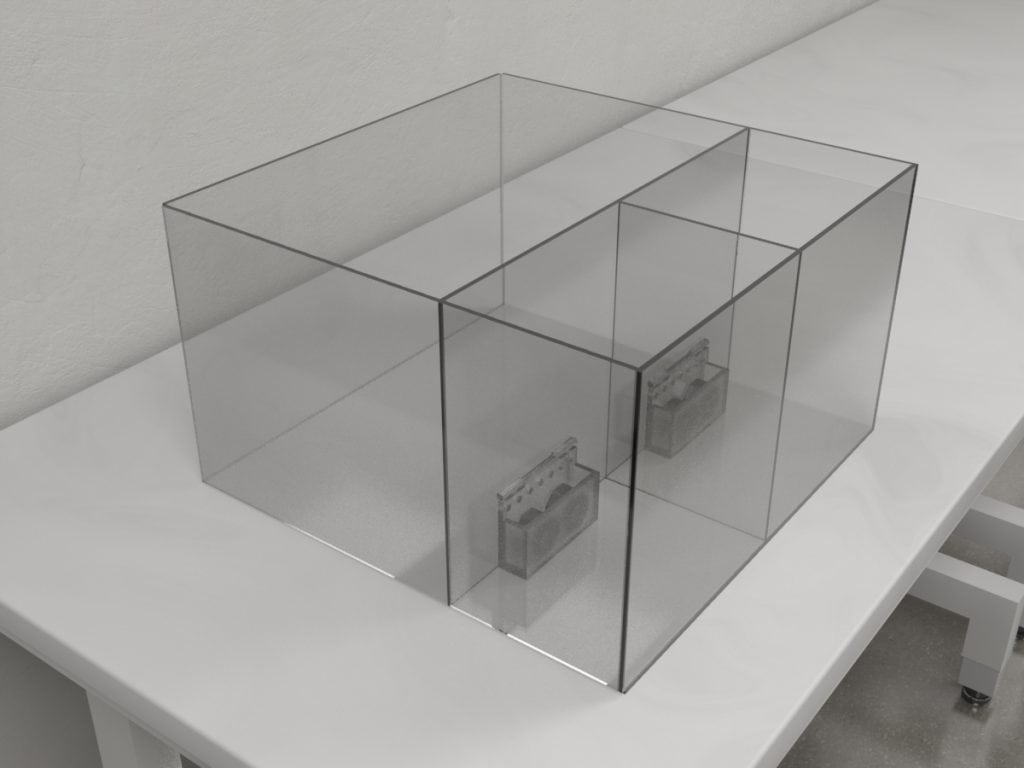 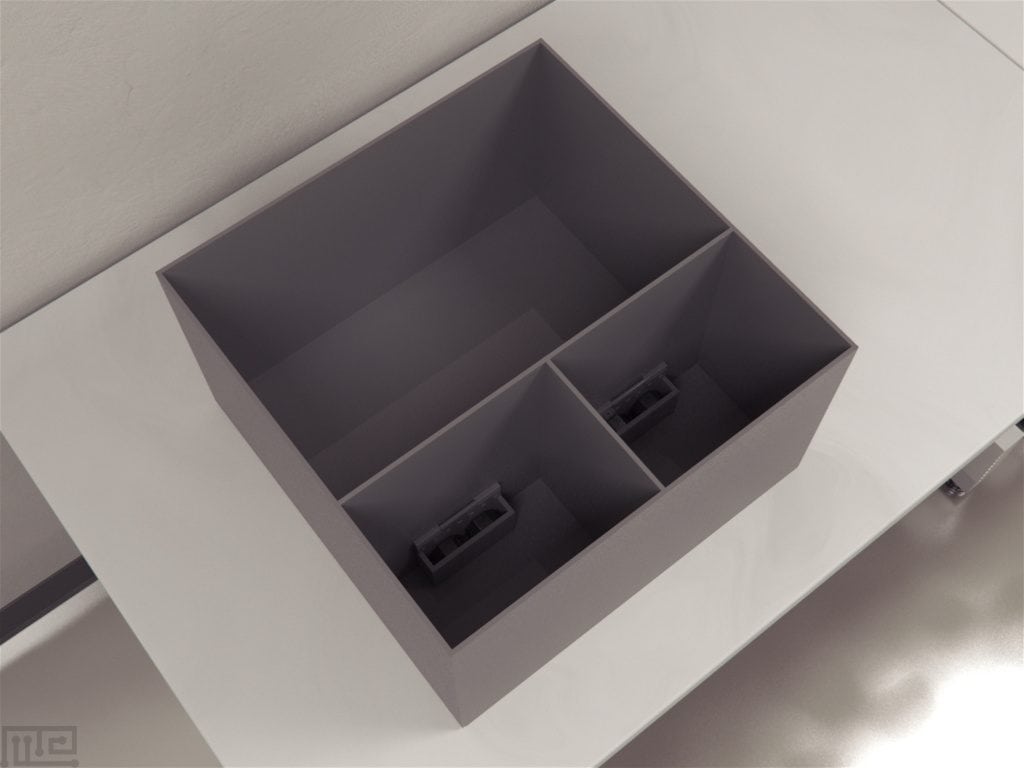 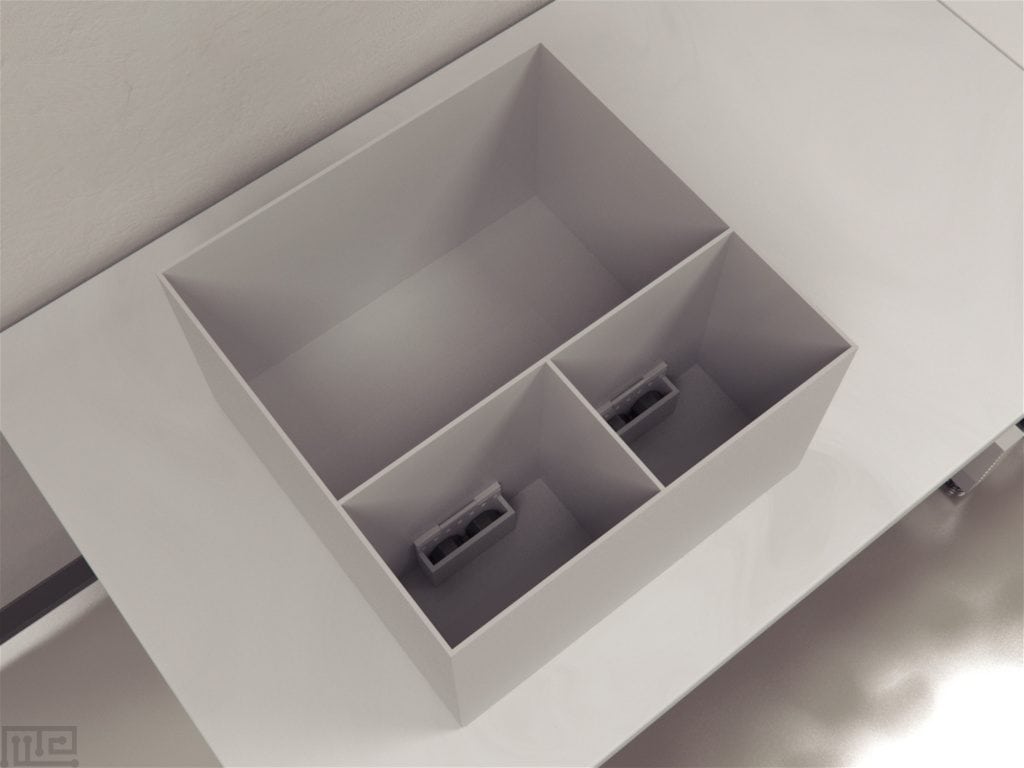 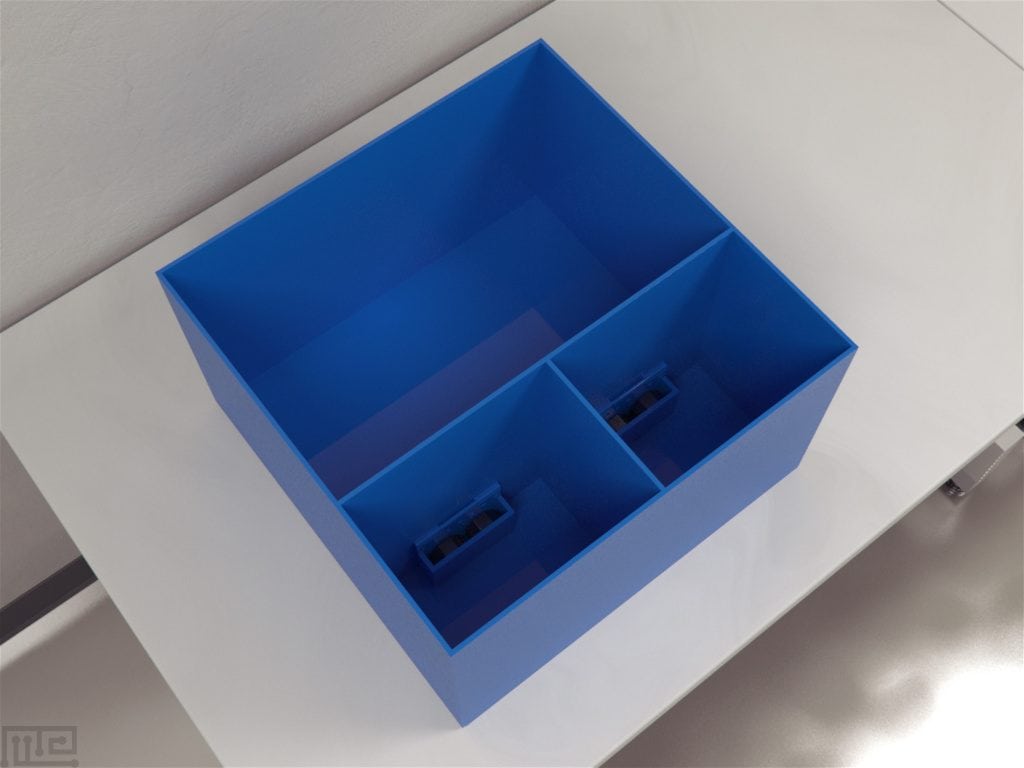 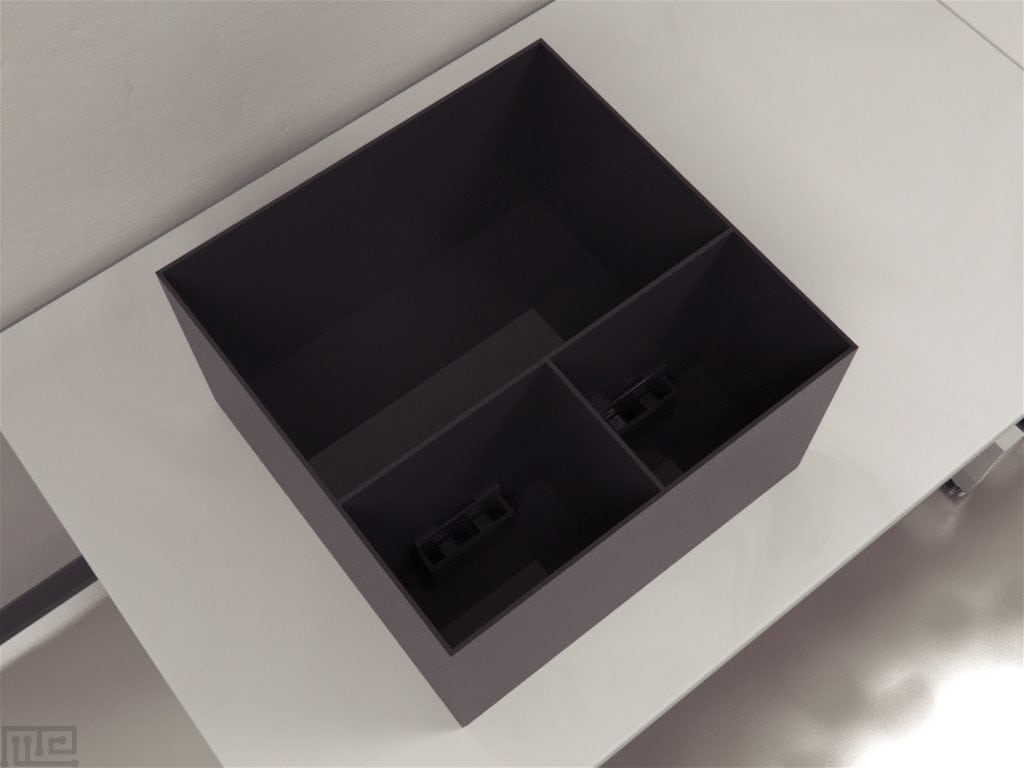 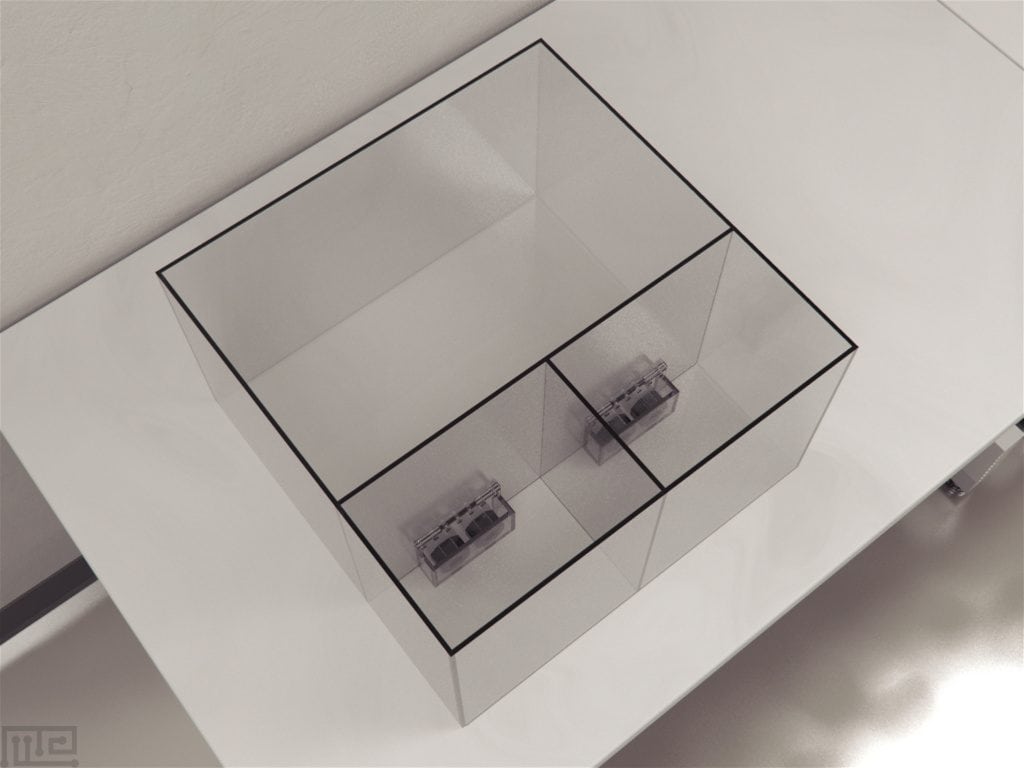 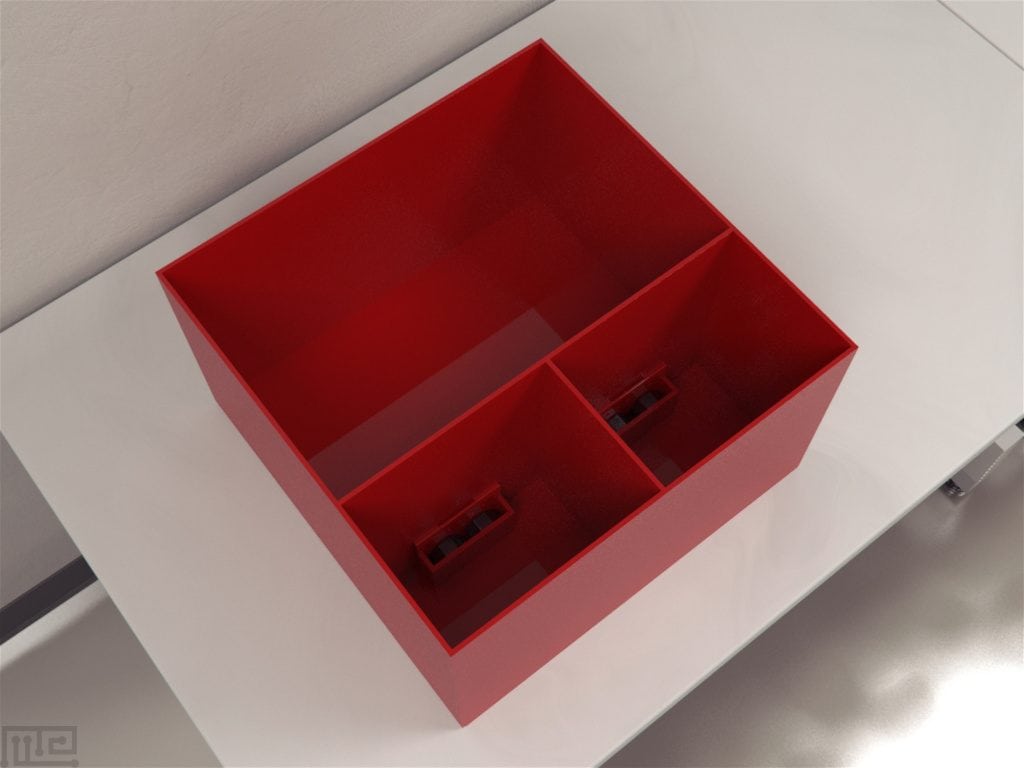 The apparatus makes use of clear acrylic chamber that is divided into one large and two smaller chambers that are separated by one-way vertical-swing doors. The doors can be weighted to increase the degree of effort required by the subject. The presence or absence of stimuli in the smaller chambers allows for the direct investigation of the effect of a social stimulus in reinforcing social interactions and in the quantification of reward value.

Social Reward Chamber model also makes for an excellent template, to base pre-clinical studies of psychiatric disorders, to assess the role of social rewards and mechanisms controlling social reward.

The Social Reward Chamber is constructed using clear acrylic and consists of three chambers. The largest chamber holds the dimensions 50.8 x 33 x 30.5 cm and the smaller chambers have the dimensions 25.4 x 17.8 x 30.5 cm.

A one-way vertical-swing door of length 10.2 cm and height of 7.6 cm each on the smaller chambers permits movement only from the largest to the smallest chambers. The doors are brushed with steel wool to create a distinction from the rest of the apparatus and are perforated to allow adequate air flow along with visual, auditory and olfactory cues. The doors are also equipped with weight holders on the smaller chamber side to allow assessment of reward value through its relationship with energy expenditure as the weights are added (Wirth et al., 2003).

For testing, subjects are housed individually in humidity and temperature controlled solid-bottom Plexiglas vivaria in a reverse light-dark (LD) cycle of 14 hours of light and 10 hours of darkness. Food and water were provided ad libitum.

Subjects are acclimated four weeks prior to the experiments and are weighed before their first behavioral test and at the end of the last behavior test. The behavioral test is performed in the first three hours of the dark phase of the LD cycle under red light.

Initial acquisition session requiring the subject to enter the stimulus chamber at least 3 times extended over 10-30 minutes and additional sessions of 10 minutes are conducted if the criterion is not met; three social entries for two consecutive days. Weights on the door bucket are progressed from none (during the first 2 days) to 113g for the next 2 days during the testing. Subjects that do not meet the acquisition criterion or display submissive behavior in the presence of conspecifics are excluded from subsequent experiments.

These indicators are recorded along with the following mutually exclusive behaviors with Noldus Ethovision XT.

The locomotor activity is scored by counting the number of square entries (OSP apparatus divided into six equal sized squares). These behaviors are measured to assess time spent in the small chamber to aid conclusions about chamber entry behavior.

Evaluation of Extinction and Reinstatement

To investigate the effects of social interactions on chamber preference, subjects are divided into two groups:

Data is averaged over the last 3 acquisition days and the 3 extinction days and used for behavior scoring to assess the relation between social behaviors and number of social entries or social preference.

The subjects are divided into two groups one of which is presented with a stimulus subject, and the other with food exposure. The experiment is carried out in two parts. The first part involves investigating the acquisition of stimulus over empty chambers, and the second part involved the presentation of both the stimuli with varying weights on the doors.

Social Reward Chamber serves as an inexpensive model for the investigation of social interactions and reward value. By the elimination of memory component, it is easy to gauge the neural mechanism involved in controlling reward value association. Further, the model enables estimation of energy expenditure in presence of rewarding stimuli by measuring the work required to push the door.

The number of chamber entries under high weight may be limited by the subject’s body weight and strength. Interestingly, it is countered by the OSP paradigm as social motivation is dependent on the time spent in pushing the doors open. The model is limited by the response of the subjects used. In case of submissive subjects, the experiments may not yield correct results.