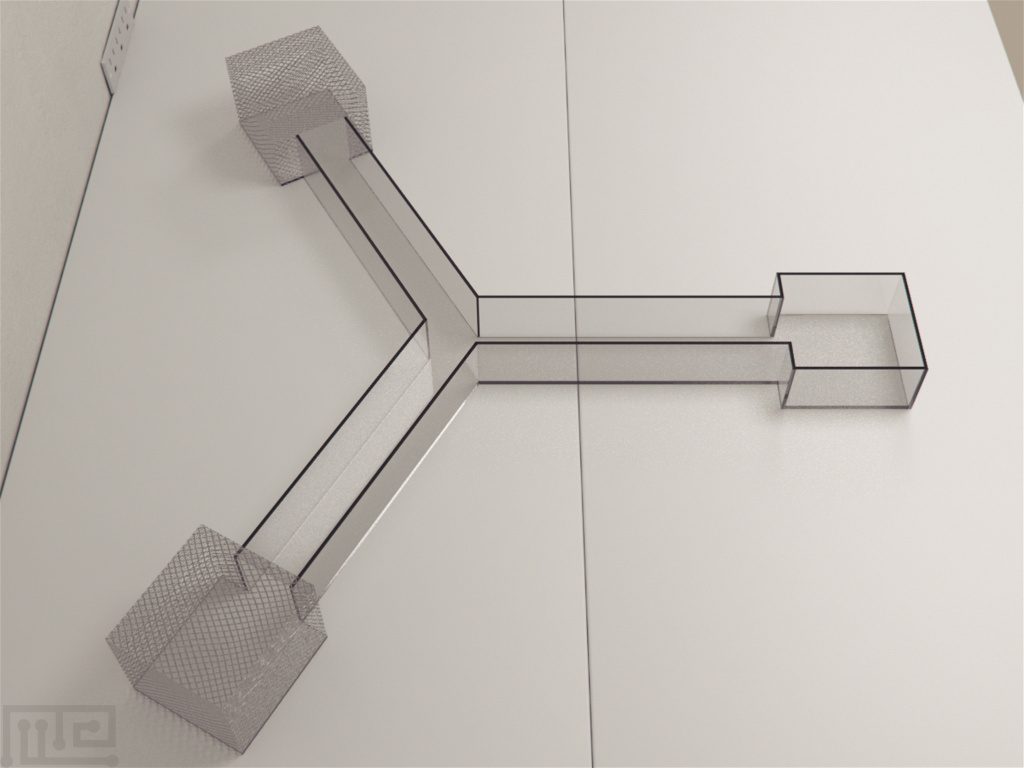 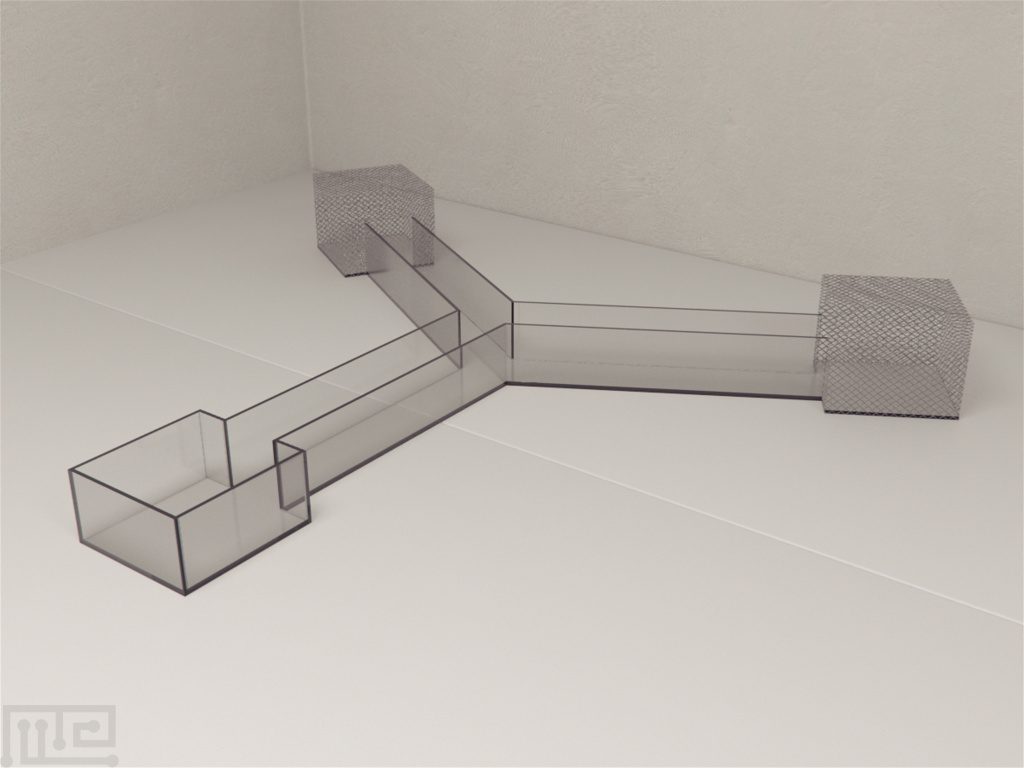 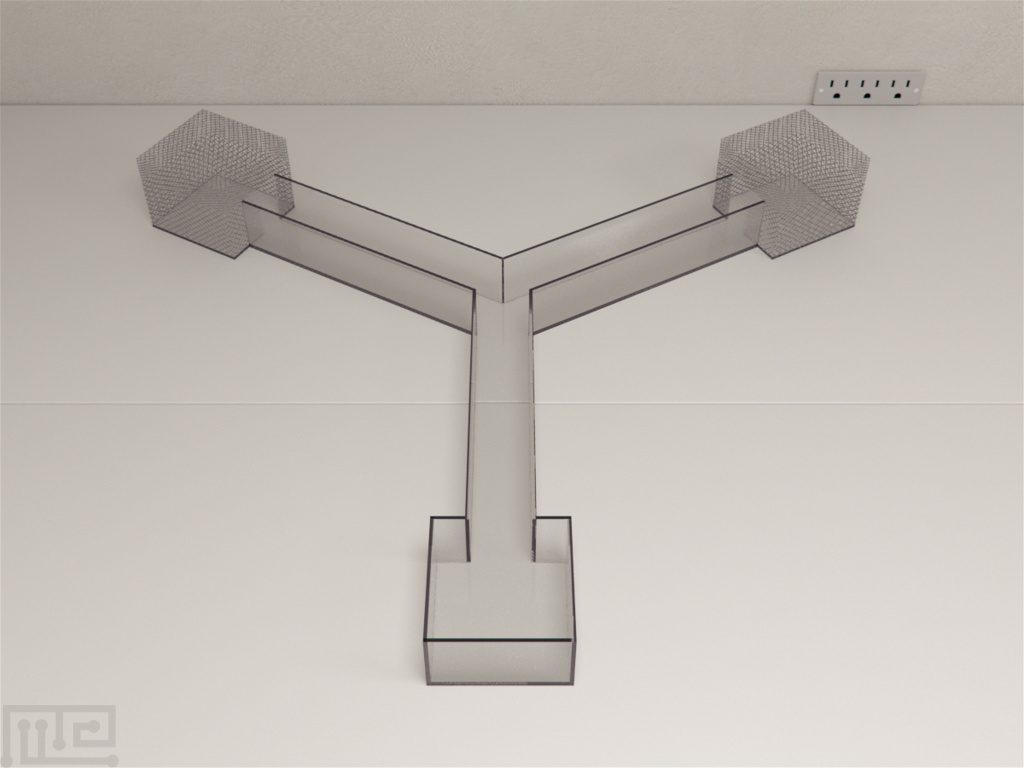 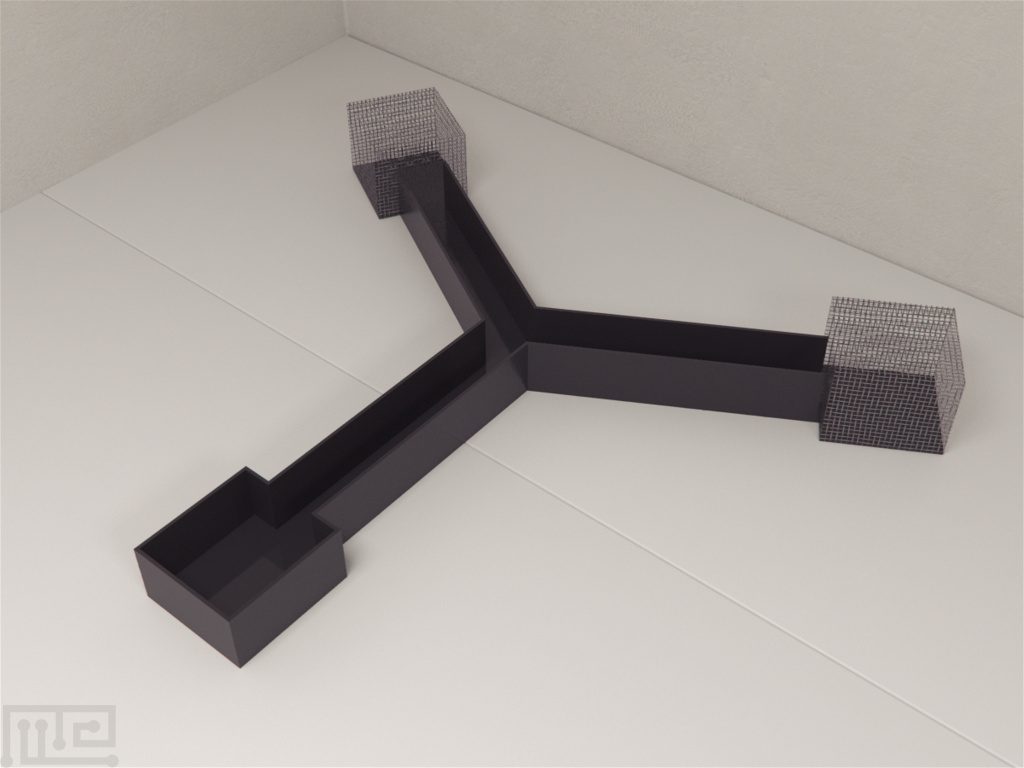 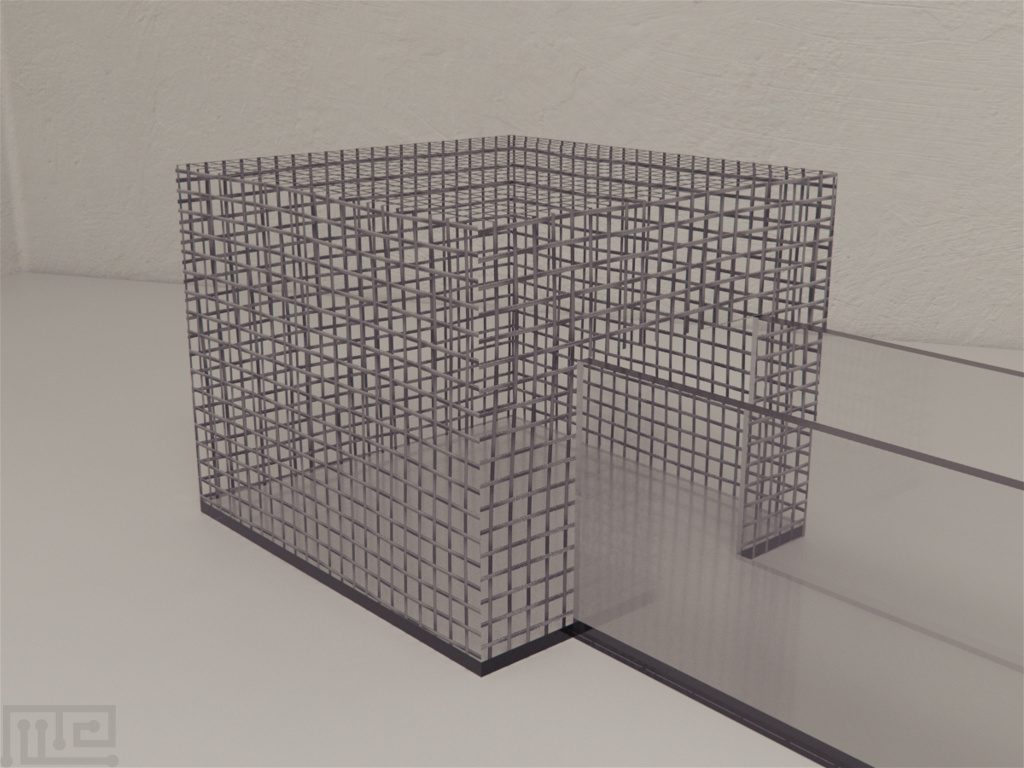 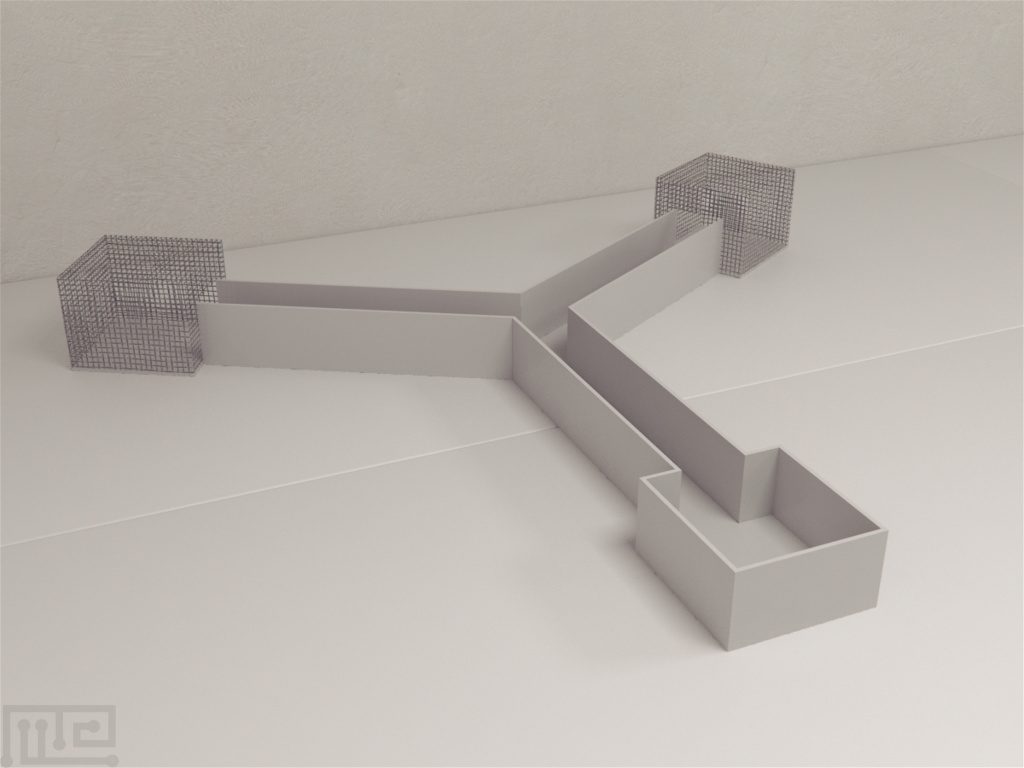 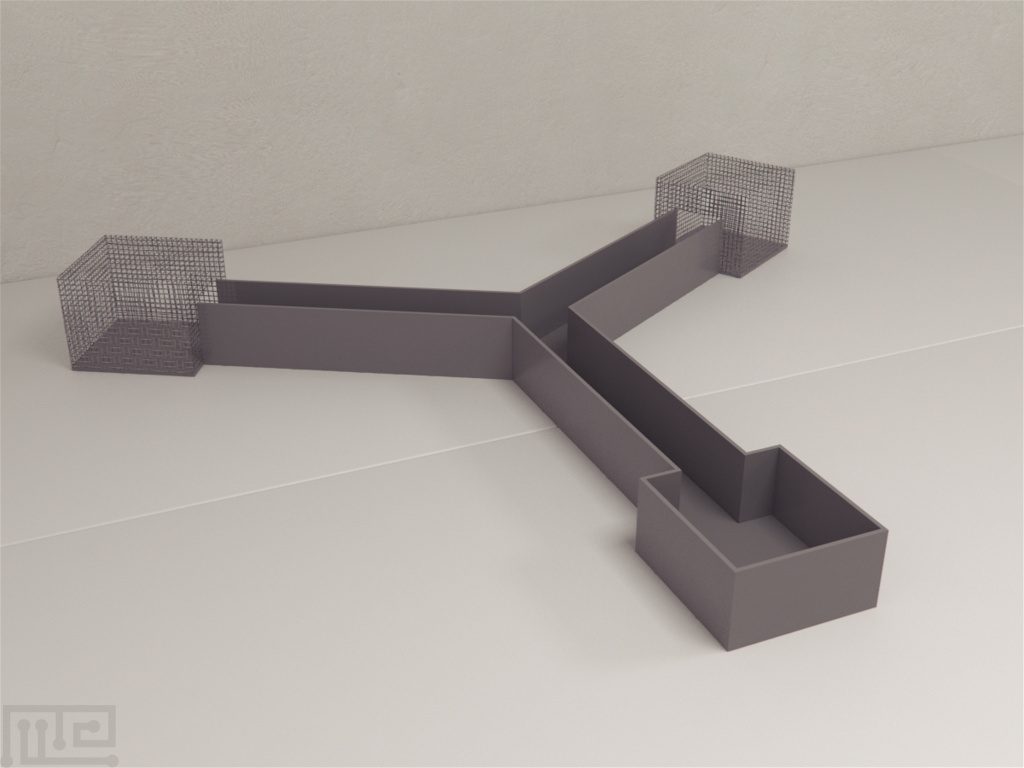 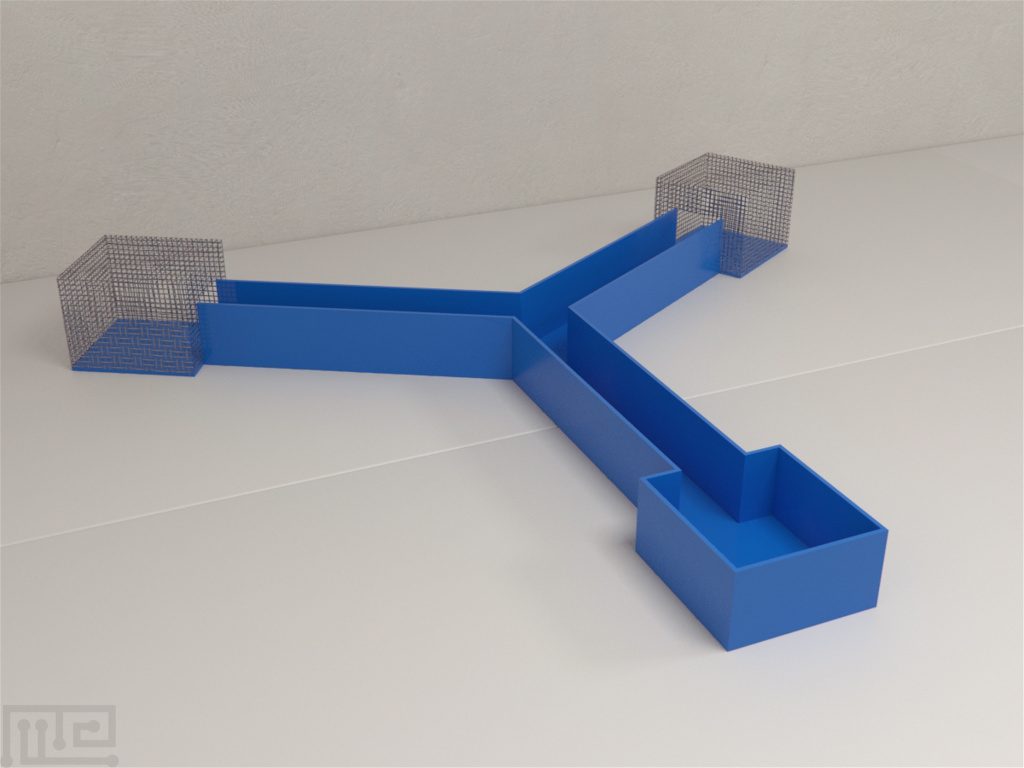 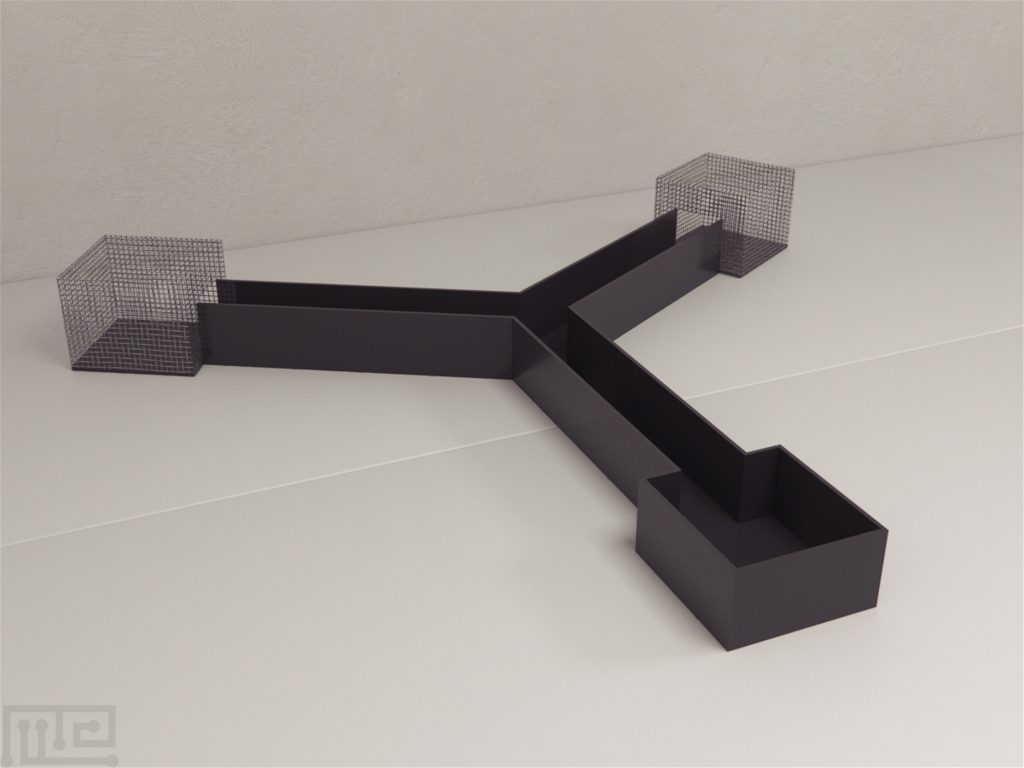 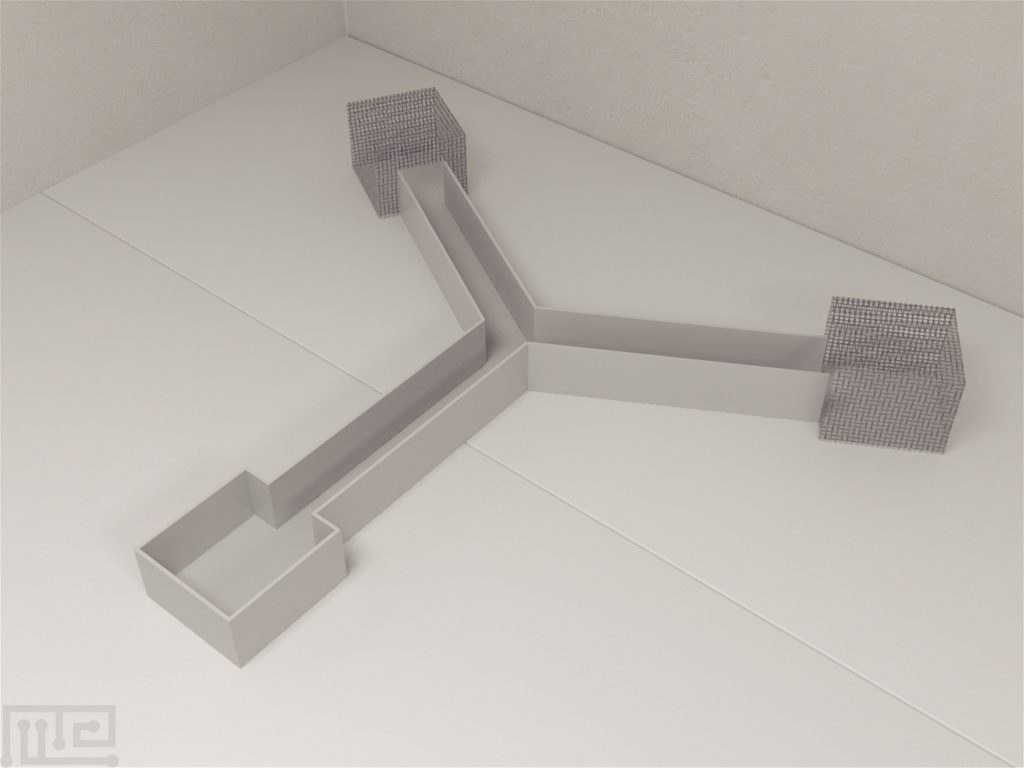 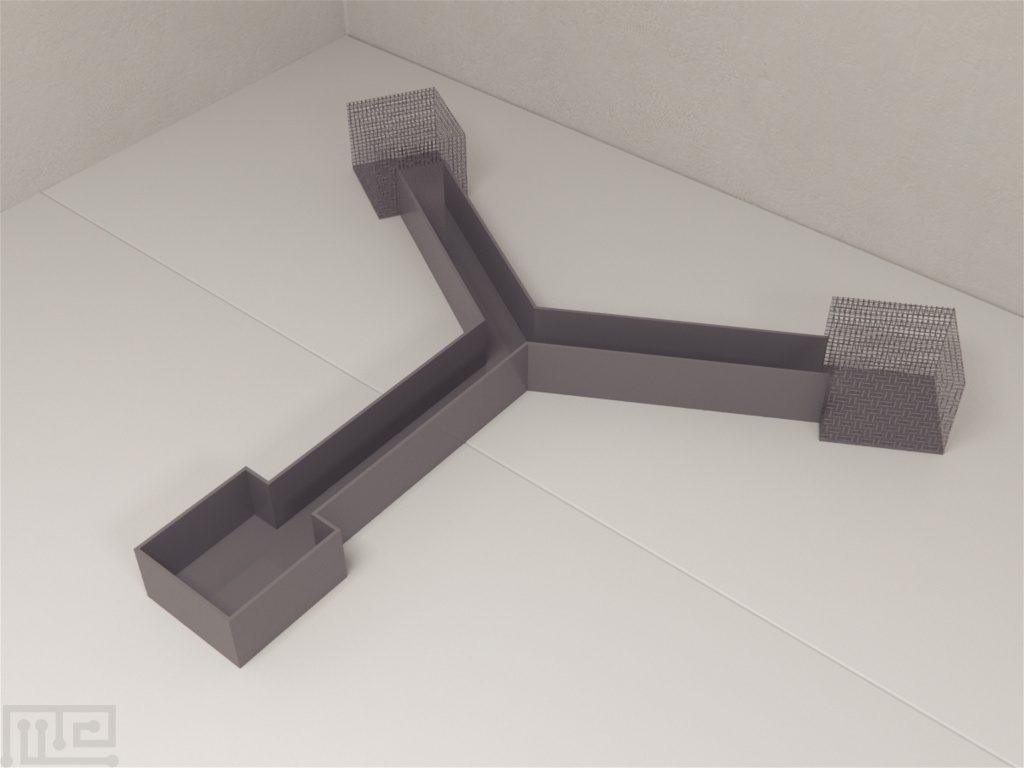 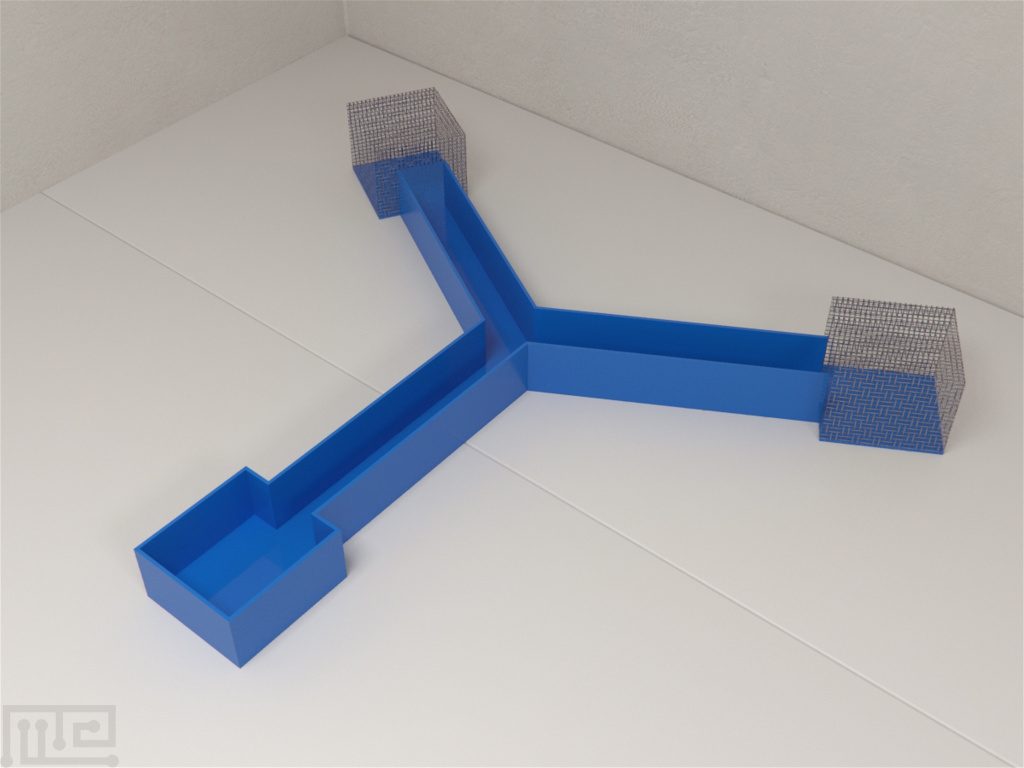 The Y maze with a social interaction cage was first described by Weber-Stadlbauer et al and replicated by Vuillermont in analyzing social interaction choices in rodents. Sizes are standard for mice and rats, but with the key modification being pair of rectangular wire grid cages. In the protocol, one wire cage contained an unfamiliar rodent (usually same sex as test mouse), and the other one contained a “dummy object.” The Mazeengineers modification of the Y maze includes two removable rectangular wire grid cages for social interaction. This modification is an add on to the regular Y maze and requires separate purchase of the Y maze.

for modification of Base Y maze

for modification of Base Y maze
Request a Social Y Maze

The Social Y-Maze is a simple apparatus with natural turn angles as opposed to the T-Maze. The maze construct includes a base Y-Maze with rectangular wire cages at ends of the goal arms. Usually, experimenters study social interaction choices using a dummy object in one arm and a live conspecific in the other.

The Social Y-Maze is a plexiglass Y-Maze with a central triangular area of 8 cm sides from which three identical arms emerge. The arms are 50 cm long, 10 cm high and 9 cm wide. One of the arms serves as the start arm, while the remaining two are used as the goal arms. The goal arm ends are equipped with rectangular wire cages that are used to hold the live conspecifics or objects.

Before beginning the sessions, clean the apparatus thoroughly to avoid the unnecessary influence of any lingering cues. Ensure the apparatus is well-lit. Tracking and video recording can be performed using software such as the Noldus Ethovision XT.

Habituate the subjects to the maze over the course of 2 days. Allow 10 minutes’ exploratory sessions per day to familiarize the subject with the maze set-up. Unfamiliar conspecifics used for the experiment may also require habituation training to the wire cages.

Place the unfamiliar conspecific (preferably same sex as the test subject) in one of the wire cages of the goal arms. In the other wire cage place a dummy object such as a small plastic block. Place the subject in the start arm and initiate the social interaction trial. The trial should last at least 5 minutes. On completion of the task, remove the subject and the conspecific from the maze and place them in their home cages.

using C57Bl6/N mice generated three generations of polyI:C or control offspring. On gestation day 9, pregnant dams either received a single injection of poly(I:C) (5 mg/kg; potassium salt) or vehicle (sterile pyrogen-free 0.9% NaCl). The offspring of these dams (F1) were weaned and sexed on postnatal day 21. Breeding pairs were selected from F1 offspring on postnatal day 70 onwards to produce subsequent generations. The offspring not chosen for breeding were used in behavioral testing. This process was done until F2, and F3 generations were obtained. Subjects of each generation were tested on the Social Y-Maze. Result analysis revealed that poly(I:C)-exposed F1 offspring showed impairment of social interactions. A similar observation was made in the F2 generation.

Vuillermot used C57BL6/N offspring of pregnant dams divided into 4 treatment groups. Groups consisted of pregnant females that were first injected subcutaneously with 1,25OHD (VitD) or vehicle (VEH) followed immediately by intravenous injection of either poly(I:C) (POL) or saline solution (CON) on gestation day 9. This led to the following 4 combinations: CON/VEH, CON/VITD, POL/VEH and POL/VITD. Subjects were individually tested in the Social Y-Maze task. Results suggested a significant interaction between MIA and VitD. The percentage time spent with the unfamiliar conspecific significantly decreased in POL/VEH group in comparison to CON/VEH group.

The following data can be observed from the Social Y-Maze task.

Other behavioral observations such as immobility and anxiety-like behavior can also be recorded as per the needs of the investigations.

The Social Y-Maze is a simple assay for the evaluation of social interactions. It requires minimal time and training to perform, and its simplicity allows for easily reproducible results. As opposed to the T-Maze, neurodevelopmental and neuropsychiatric disorders in a simple set-up. The task can also be used in other clinical investigations such effects of drugs or lesions on social interactions.

The Social Y-Maze is a single-point two-choice only maze. Thus, the subject’s choice of interaction is limited to the choices it is presented with. The choice of unfamiliar conspecific can have an impact on the performances of the subject as can the dummy object. Other factors such as disturbances during the maze performance (olfactory, auditory or visual) can affect the subject’s performance.